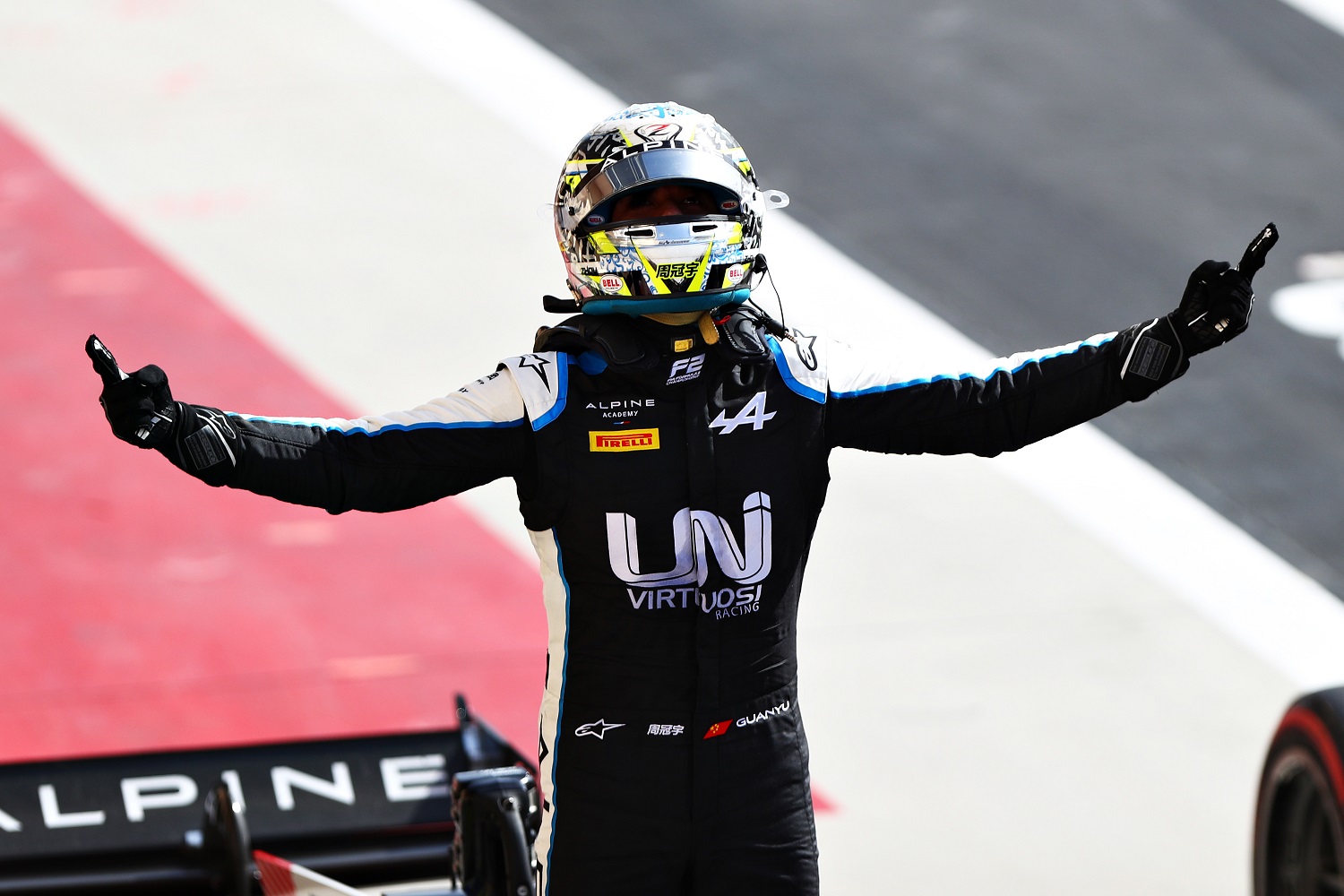 UNI-Virtuosi’s Guanyu Zhou used all of his experience to take a hard-earned first Feature Race win from pole in Sakhir, but it wasn’t as simple as lights-to-flag. Initially tumbling down the order at the start, Zhou scythed his way back through the field, beating Carlin’s Dan Ticktum and Hitech Grand Prix’s Liam Lawson.

Starting on the hard tire, Zhou couldn’t compete with those on the softs around him and fell out of the top 10, before a Safety Car gave the order a shake-up. Ticktum, Lawson and Richard Verschoor all benefitted, but the Chinese driver was imperious and won at a canter.

Verschoor – who briefly led the race – finished fourth and just missed out on a podium, after the MP Motorsport driver lost a late battle with tire degradation.

DAMS’ Marcus Armstrong claimed an impressive eight scalps on his way to fifth, beating Jehan Daruvala and Robert Shwartzman, the latter doing well to fight back after an early drive-through penalty.

Théo Pourchaire and Felipe Drugovich finished eighth and ninth, ahead of HWA RACELAB’s Matteo Nannini, who took his first points in F2.

After an intense late battle in Sprint Race 2, Zhou and Lundgaard reignited their fight at the start from the front row. Pounding off into a whirlwind of sand, Lundgaard got the better of his Alpine Academy rival at Turn 1, fighting against the gust and taking the inside line to come out in first place.

Having already lost P1, Zhou – who started on the hard compound – was then in a scrap for second with his Virtuosi teammate Drugovich, who eventually hauled himself ahead of the Chinese driver.

An early Safety Car brought a halt to the action after Roy Nissany was clipped by Shwarztman and forced to retire. Shwartzman survived the scrap but was handed a drive-through penalty.

Zhou lost another place at the restart and fell to fourth behind the in-form Oscar Piastri, who was still buoyant from his debut win in Sprint Race 2. The PREMA racer was far from finished, continuing his sparkling debut weekend with a fifth overtake, this time on Drugovich, braking late to take P2 at Turn 1.

Lundgaard complained of a “strange balance” on team radio, as Piastri started to reel him in too. Drugovich joined the battle and the trio went three-wide at the first corner, with the PREMA eventually coming out in P1.

Having lost first, Lundgaard opted to ditch the soft Pirellis on Lap 14 and jumped into the pits for a set of hards, returning 13th. Drugovich decided his softs had had enough as well one lap later, pitting for fresh boots and returning further back in 12th.

Piastri opted against a change, before his team sensed an opportunity when Gianluca Petecof retired. PREMA called in the Australian for fresh rubber just ahead of a Virtual Safety Car, and returned him in fourth place, with track position.

In the end, a full Safety Car was required and this shook up the order, with Armstrong leading Piastri and Verschoor. Though, the Kiwi dropped right down at the restart, with Verschoor dramatically taking the lead on the soft compound.

Also on the soft, Zhou had tussled his way back through and managed to nip past Piastri on the first corner of Lap 23 to put just one place between him and his first Feature Race win. In the background, Ticktum fired ahead of Lawson for fourth.

Lundgaard had lucked out in the Safety Car period, getting stuck down in 10th at the restart, before being handed a 5s time penalty for a SC infringement, along with a handful of drivers, including Drugovich, who was running seventh.

Verschoor was desperately trying to defend the lead from Zhou, but the Virtuosi man used all of his experience to take the better track position and drag himself in front.

The Dutchman’s attention switched straight to the dazzling red PREMA of Piastri in third, but thankfully for him, the Australian was busy defending from Ticktum. Their battle came to a heart-breaking conclusion, with the two coming together at Turn 2, spinning Piastri off the road and out of the race. Ticktum got away unscathed and a VSC brought the drama to a stop.

Racing resumed with two laps to go and Ticktum jumped Verschoor, who also lost third to Lawson and fell off the podium. Meanwhile, Zhou kept it calm out in front to run home as the winner.

Zhou now leads the Drivers’ Championship with 41 points, ahead of Lawson on 30 and Daruvala on 28. Piastri is fourth with 21 and Ticktum fifth with 19. In the Teams’ title fight, Carlin are first with 47 points, ahead of Virtuosi on 43 and PREMA on 37. Hitech are fourth on 30 points, ahead of ART on 24.