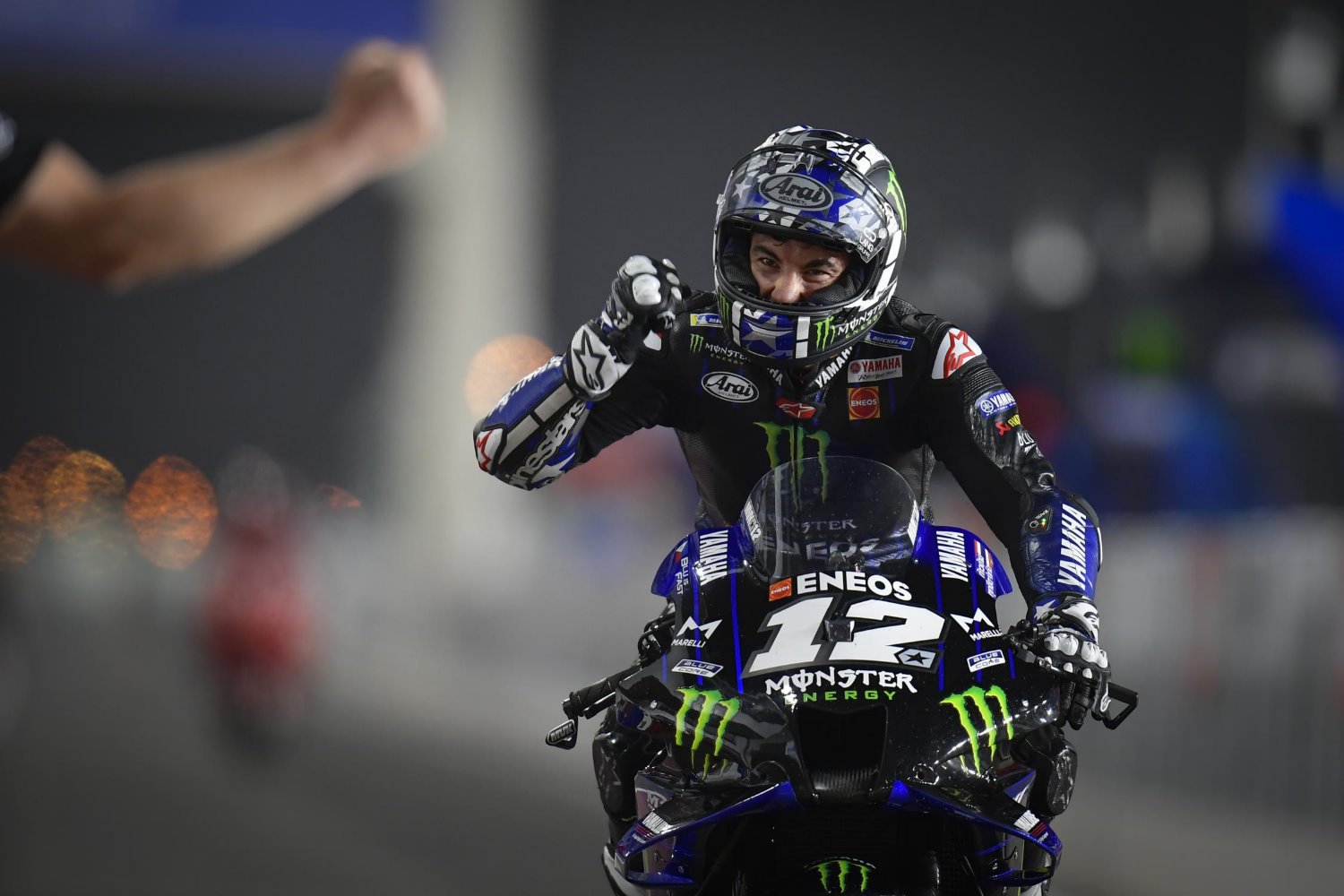 The season opener got going at a blustery Losail International Circuit, with Maverick Viñales claiming his first win at the Qatari venue since 2017. Team-mate Fabio Quartararo had a fast start to the 22-lap race but ultimately slipped to fifth position in the closing stages.

The Losail International Circuit has only seen one manufacturer win there in the last two seasons. That is, of course, Ducati. Heading into the opening race of 2021, the Italian manufacturer in the capable hands of Francesco Bagnaia, Ducati Lenovo Team teammate Jack Miller and Johann Zarco (Pramac Racing) were favorites to continue the trend. What very few people expected was a Viñales victory. Not because he isn’t capable, but because Ducati’s straight-line speed and off the mark advantage seemed a bit too much to overcome for the Yamahas, especially after what we saw in 2020. Many were proved wrong.

As the lights went out, Ducati’s monsters roared into Turn 1 four abreast. Viñales and teammate Fabio Quartararo were helpless from the front row as Bagnaia, Miller, Zarco and even Jorge Martin (Pramac Racing) – from 14th on the grid – shot into the first corner in P1, P2, P3 and P4. It was unreal to watch. But what happened next proved that Yamaha and Viñales have turned a corner.

Through the first sector, Viñales was P9. From there, previously, it was probably game over in terms of a decent points haul for Yamaha as battling in a pack with different machines is something that has been a huge weak point in the last couple of seasons. So for Viñales to then pick each rider in front of him off, not look uncomfortable doing so, and going on to win the race in commanding fashion was simply stunning.

Yamaha’s game, and the victories we’ve seen from Viñales in recent years, has been to get out at the front from the get-go and run your own race. Malaysia 2019 is the prime example. It’s been the trademark for years for the Iwata factory, and a lot of the time it’s worked. But after last season especially, something needed to change. And seemingly, something has.

Both Viñales and Yamaha look like improved weapons in 2021, and what was uplifting to see was the Spaniard speaking with such pride in the post-race Press Conference about how happy he is with life at home. He’s now a husband and a father to be. A stress-free Viñales is obviously a very, very quick Viñales.

It might have only been Round 1 of the season, but we learned a lot from Qatar’s opener. When Viñales says “we are back”, it looks like he really means it. The Spaniard won one race last season but it was a largely disappointing year for both him and Yamaha in general. Yes, they won seven out of 14 races, but Viñales and Quartararo’s title challenges on the latest spec machinery went up in smoke. To display such a performance that is pretty much the total opposite of what we’ve seen from Viñales and Yamaha in recent years is a tell-tail sign that the combination is here to stay at the top of the Championship for the foreseeable.

Since winning his first race with Yamaha in Qatar at the start of the 2017 season, it’s fair to say it hasn’t completely gone to plan for Viñales in Iwata blue. Three wins in the opening five races was a dream start to life as a Yamaha rider, but five wins – including the latest triumph – since the famous Le Mans encounter hasn’t been the icing on the cake. This might be the start of what we all came to expect though.

It must be said that Yamaha have always performed well in the Qatari desert: Viñales, Valentino Rossi and Jorge Lorenzo have all won at Losail. But that shouldn’t take anything away from what we witnessed on the latest Sunday under the lights. Let’s reiterate: it’s not the win that was most impressive, it was the style of win that has raised eyebrows.

Of course, lots can change very quickly in MotoGP™. There’s no doubt that every rider will be stronger at the Losail International Circuit next weekend, but Viñales has rekindled old feelings with his YZR-M1. Winning in such fashion sends out a warning shot to the rest of the field, but we’re only one race into a season.

A lot can change over the coming months. However, Viñales has returned to action with an almighty bang. Is this form here to stay? Time will tell.