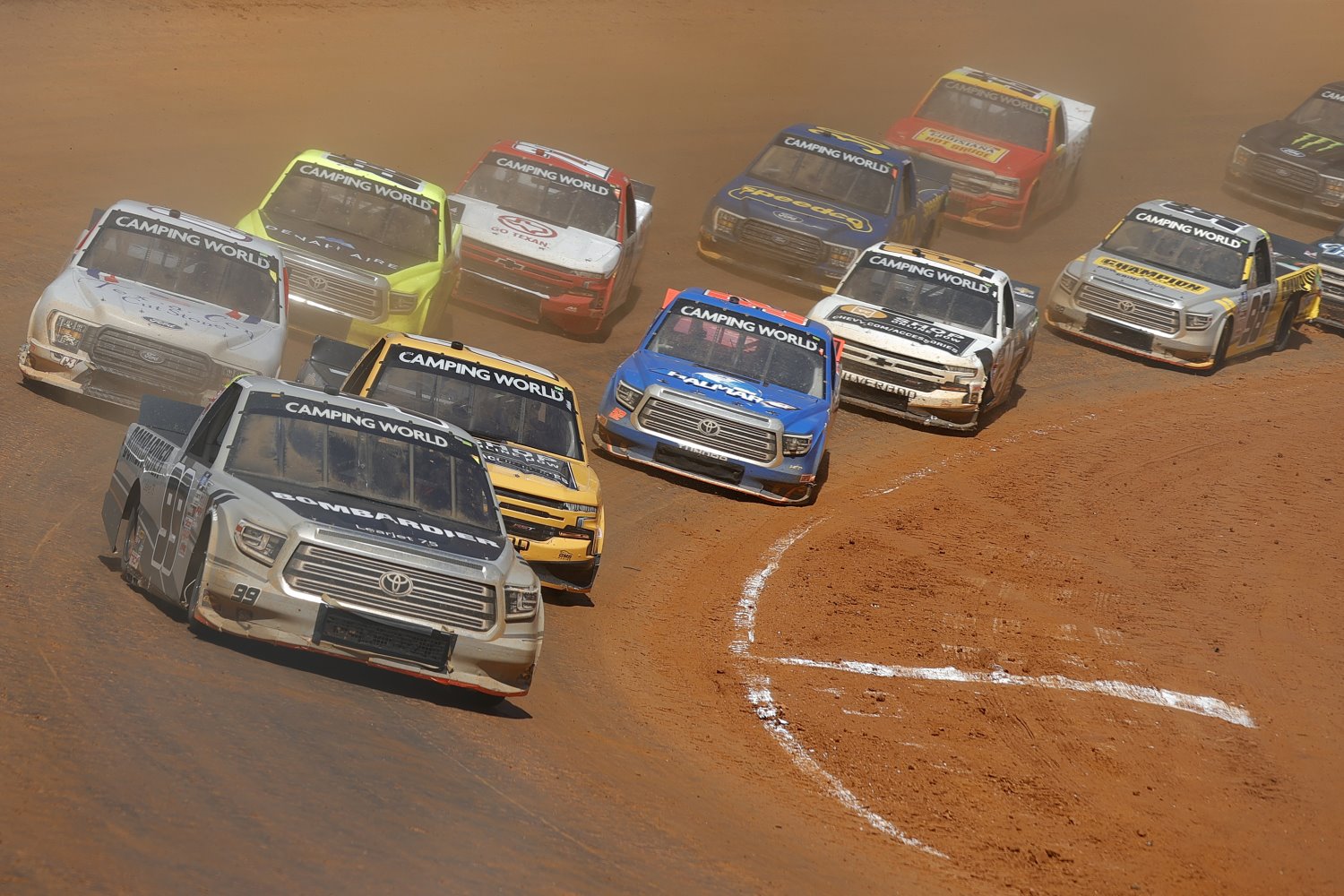 Nor was it a NASCAR Camping World Truck Series regular who took the checkered flag.

When the dust settled, Martin Truex Jr. was the unlikely occupant of Victory Lane—and a dominant one at that. Racing in the Camping World Truck Series for the first time since 2006, Truex led 105 of the 150 laps in an action-filled race that featured 12 cautions for 54 laps and saw pre-race favorite Kyle Larson and series leader John Hunter Nemechek in the garage with wrecked trucks at the finish.

The race was run at an average speed of 41 mph – a snail’s pace.

It was the first career win for Truex in his third career NASCAR Camping World Truck Series start, but it was the third straight victory this season for a Kyle Busch Motorsports Toyota—and 83rd overall. Truex is the 35th driver to win in all three of NASCAR’s top touring series.

“It’s unbelievable, really,” said Truex, who was using the Truck Series race to prepare for the NASCAR Cup Series event later on Monday afternoon. “I guess they had to put dirt on Bristol to get me back to Victory Lane here. It’s been a long time. Man, that was a blast.

“I wanted to run this race so I could get more experience with the Cup car, and we got out there in practice and it felt really good. And I was having a lot of fun, so I just kept trying to work with the guys and tell them what I needed. It was really amazing how much the track changed, but I will have to say the (No. 51 Tundra) stayed really, really good the whole time.”

Truex took control of the race after reigning series champion Sheldon Creed led Laps 2 through 39. Ben Rhodes lined up beside Truex on the front row for the final restart on Lap 139 but missed a shift, dropped briefly to third and fought his way back to the runner-up spot.

“We were running them back down there the last few laps, but, yeah, just the worst restart of my life,” Rhodes said. “Early in the race, I had an issue of getting it into fourth gear and missed a shift early on, but I really didn’t think nothing of it and had clean shifts afterwards—and then just missed it. Bummer for my guys, but the closest I’ve been to winning here at Bristol was on the dirt.”

Nemechek exited after a Lap 49 crash, spinning after contact from Matt Crafton’s Ford and sustaining heavy damage when the No. 19 of Derek Kraus slid into his No. 4 Toyota as it sat near the outside wall of the half-mile high-banked speedway.

Larson was unable to avoid the slow truck of Mike Marlar on Lap 99 and sustained extensive damage to his No. 44 Niece Motorsports Chevrolet after heavy contact with the No. 30 Toyota of Danny Bohn in the same incident.

“My spotter said they were slowing down the backstretch, and a I saw some trucks slowing on the bottom, so I was running the top,” said Larson, who was set to start the subsequent NASCAR Cup Series race from the rear of the field because of an engine change in his No. 5 Chevrolet. “I thought ‘I’m going to get a lot of spots here in (Turn) 3.’ So I ended up top, and there was somebody parked there.

“We were fighting. Our truck wasn’t very great, but we were making adjustments on it… I still learned something for the Cup race, which was nice… learned how to pass people, so starting in the back, that’s a help.”

The NASCAR Camping World Truck Series will return to action on April 17 at Richmond Raceway for the ToyotaCare 250 (1:30 p.m. ET on FS1, MRN and SiriusXM NASCAR Radio).

How exciting was that Martin?

“It’s unbelievable really. I guess they had to put dirt on Bristol to get me back into victory lane here. It’s been a long time. That was a blast. I’m still really surprised. I wanted to run this race so I could get more experience for the Cup car, and then we got out there in practice and it felt really good and I was having a lot of fun, so I just kept trying to work with the guys and tell them what I needed, and just thanks to Auto Owners, Noble Aerospace, Toyota, TRD, everybody at KBM (Kyle Busch Motorsports) for letting me drive this thing and putting this deal together. That was a blast. I kept thinking, ‘what’s going to happen next, am I going to get a flat tire or something stupid?’ This 51 is pretty much used to finishing in victory lane, so a lot of pressure there, so I’m glad we could get it done.”

What did you learn that you can take to the Cup race this afternoon?

“I learned a lot. It was really amazing just how much the track changed, but I’ll have to say this thing stayed really, really good the whole time. I think if you’ve got a good car, you are going to be good all day long. It just depends on what they do to the track. It’s getting hotter, it’s going to keep drying out and get slicker, so we will see what they do to prep it, but no matter what they do, that was a blast and I’m looking forward to this afternoon.”

Did you expect to win here today?

“You always expect to win when you come to the race track. I’m pleasantly surprised to say the least. We came here this weekend and I wanted to run this truck just to get some experience and try to help with the Cup car. Who would have thought that I would get my first Truck Series victory on dirt. Really happy for the opportunity. Thankful to Auto Owners Insurance, Noble Aerospace and obviously Kyle (Busch, team owner) and everybody at KBM (Kyle Busch Motorsports) for putting this deal together and letting me do this – Toyota, TRD. This was a lot of fun. We weren’t supposed to come here and win. That’s really the icing on the cake. Now I’ve got my truck win that I’ve been thinking about wanting to go after. Really, really cool and still a little bit surprised. What an awesome job these guys did with this truck. Made the right adjustments for today. I told them a few things I wanted to change from practice, he (Marty Lindley, crew chief) changed a few things himself. Marty Lindley (crew chief), he’s an old veteran. He did a heck of a job and that was a lot of fun.”

How did reality differ from your initial expectations of how this race would go?

“I really just had an open mind about it. I thought that any time we go and do something new and different, it’s always fun. Even though I don’t have a lot of experience doing this, I looked at it as, ‘Hey, Bristol hasn’t been a great place for me anyway, let’s put dirt down and see how it goes.’ The little time I’ve spent in dirt vehicles, which is not much at all, I really enjoyed myself. That was one thing I was looking at and thinking. Every time I got on dirt in something, I had a lot of fun. I just approached this weekend as let’s go have some fun, let’s try to figure it out as quickly as we can and that’s why I ran the truck. Clearly, we had a good truck and we figured it out and here we are. Just a blast and thankful for everybody for making it happen.”

What types of things did you learn to apply to this afternoon’s Cup Series race?

“I learned a ton. Obviously, the track changed a huge amount and my wish is that they could put it back to the way we started this race because that’s what really made it fun. You could move around early in the race, especially make moves and we went from 15th to the lead in 15 or 20 laps. You could move around on the race track a little bit more than you could at the end. Hopefully, they’ll do some more work and get it back closer to what it was. By the end of our race, it’s going to be super slick. It’s going to be really black all the way around and guys are going to have their hands full. It’s going to be fun.”

Do you think the missed shift on that last restart cost you an opportunity at going for the win?

“We were running him (Martin Truex Jr.) back down those last few laps, but yeah, just the worst restart of my life. Early in the race, I had an issue of getting it into fourth gear, and missed a shift early on and really didn’t think anything of it. I had clean shifts afterwards, and then just missed it. Bummer for my guys. That is as close as I’ve been at Bristol to winning here and it was on the dirt, so they gave me a great Bombardier Tundra. I’m just a little angry at myself. I think I could have brought them home a trophy, but big picture, I know the 51 (Truex) is kind of doing their thing, but for the overall championship for us, this is a huge race. I know that a few of our competitors had a bad day. At the end of the day, still really solid. We came here and did exactly what we said we wanted to do. We hit all of our goals, just sucks to be the first loser.”