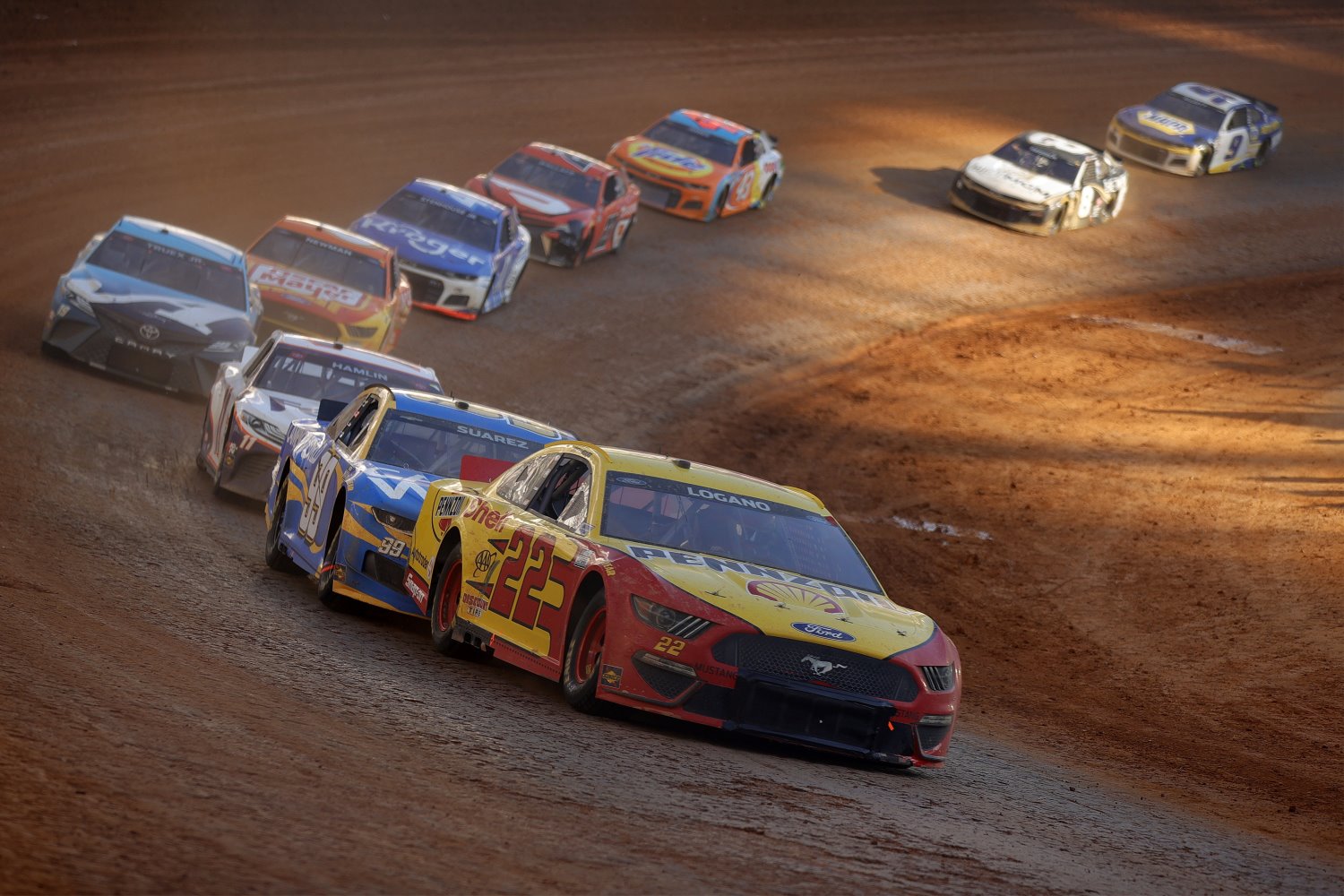 Penske Ford driver Joey Logano won Stage 2 and then led every lap of Stage 3 to win the Food City 500 NASCAR Cup race on the Bristol Speedway dirt track over Ricky Stenhouse Jr. who was 4th when the green-white-checkered waved but moved up to 2nd on the final lap.

Logano grabbed the lead from Daniel Suarez on Lap 193 of a scheduled 250 and held it the rest of the way through a caution for the second stage break and a late yellow that sent the race three laps beyond the prescribed distance.

It was the NASCAR Cup Series’ first race on dirt since 1970.

Logano led 61 of the 253 laps in the Food City Dirt Race, driving his Team Penske No. 22 Ford to a 0.554-second margin of victory at the checkered flag. His first win of the season was his third at Bristol and the 27th of his Cup Series career.

“Man, it’s incredible,” said Logano, who won the second straight race for Team Penske and the 27th of his career, extending his streak of at least one victory per year to 10 years. “How about Bristol on dirt? This is an incredible, unbelievable race track—great job by everyone that prepped the track. Obviously, a lot of work over here the last few days (because of rain that forced postponement from Sunday). We did a lot of work in the dirt department here the last few weeks…

“Great car, obviously, to be able to execute the race that we did and get a win. I was getting nervous. There were so many first-time winners and different winners than there has typically been. I said, ‘We’ve got to get a win to make sure we get in the Playoffs,’ so it’s amazing to get this Shell/Pennzoil Mustang into Victory Lane at Bristol. There’s nothing like winning at Bristol, but putting dirt on it and being the first to do it is really special.”

Despite late brushes with the outside wall as he chased Logano, Hamlin now has three third-place finishes and six top fives this season.

“I really couldn’t see a whole lot,” referring to the dusty conditions late in the race. “I was kind of guessing. I thought I could, on that last restart, run the top in hard, but they didn’t prep it in-between cautions the way they did before. It was just marbles up there.

“Man, I thought I had a shot there. I cut the 22 (Logano) too many breaks there when he was cutting us off. They had a little better car, it looked like, there in the long run. Proud of this whole team—we’re third-best again.”

Two of the experienced dirt drivers expected to battle for the victory were eliminated from contention in one dramatic wreck two laps after the restart that followed the first competition caution.

Running second on Lap 53, Christopher Bell spun in the top lane in Turn 2. Kyle Larson, running the top lane behind Bell, plowed into his chief dirt-track rival in a wreck that also involved Kevin Harvick and Ross Chastain.

“Way to go, Bell—way to go,” Larson said sarcastically on his team radio after the wreck. Larson, at least, was able to continue but lost two laps during repairs. Bell and Chastain fell out of the race in 34th and 35th place, respectively. Larson finished 29th, five laps down.

“I was just trying to run the water in under yellow,” Bell said after a visit to the infield care center. “I knew it was a little bit slick, but I felt like I could go up there and make some time, and I kind of entered shallow underneath of it and tried to pick it up on exit, and it was just really greasy up there.

“That was a lot of fun, being able to be out there for that first run was really cool and hate it that I can’t be out there longer.”

Truex, who scored his first Camping World Truck Series win on the Bristol dirt, prevailed in Stage 1 and led a race-high 126 laps before fading to a 19th-place finish with a flat tire in overtime. He gave way to Suarez on Lap 135, who held the point for the next 58 laps until Logano took charge to win Stage 2. Logano stayed in front the rest of the way, leading the final 61 laps.

The race was slowed by a handful of multi-car wrecks that thinned the field of contenders. A Lap 51 crash knocked dirt-track specialists Kyle Larson and Christopher Bell out of the running for the win early. Bell lost control of his No. 20 Joe Gibbs Racing Toyota in the high line, collecting Larson’s No. 5 Hendrick Motorsports Chevrolet and Ross Chastain’s No. 42 Chip Ganassi Racing Chevy in its wake.

Bell and Chastain were sidelined, and Larson continued off the pace with a damaged car.