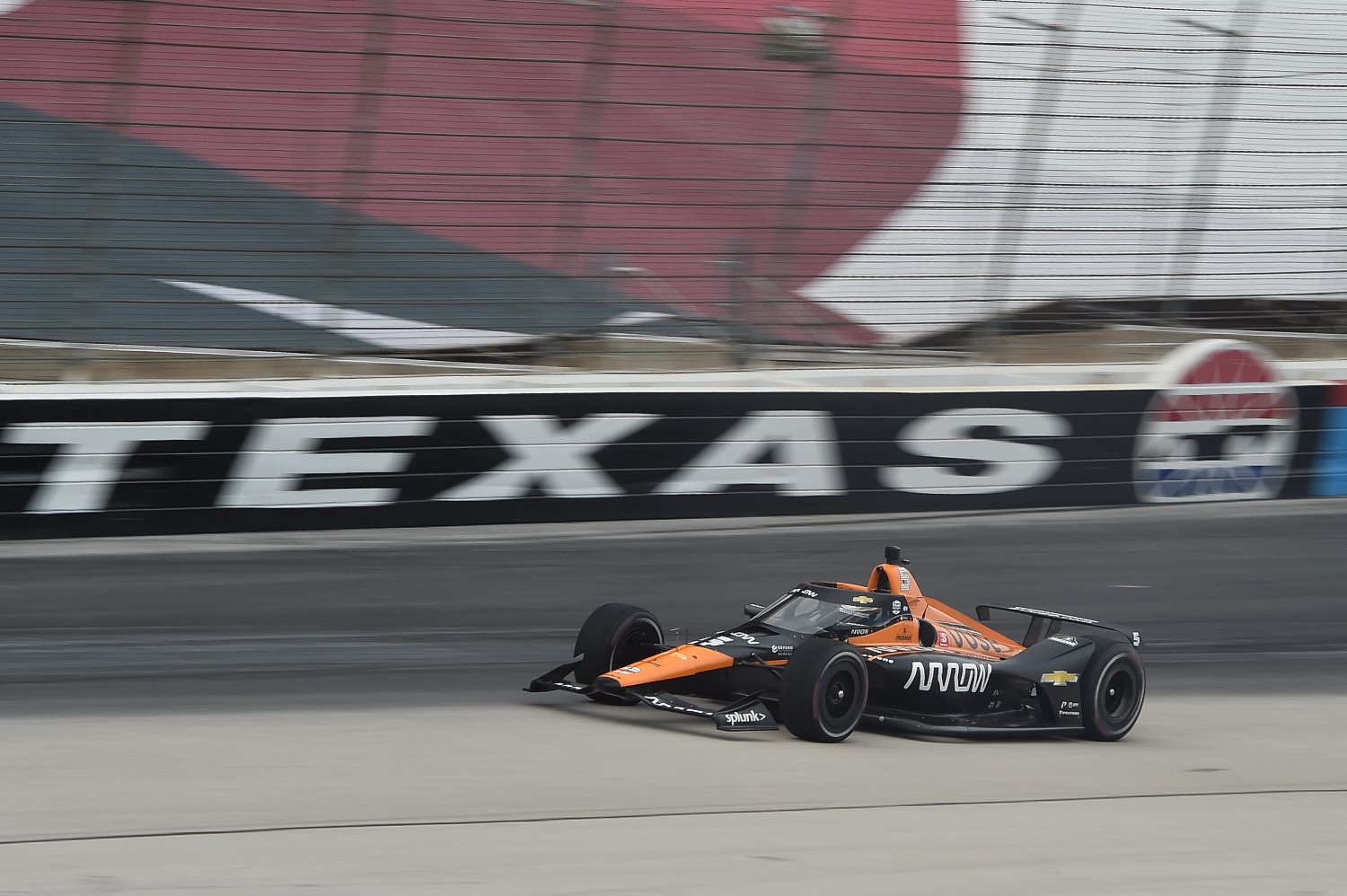 Some scenes from yesterday…..when Arrow McLaren Mexican ace Pato O’Ward was quickest in his #5 Chevy.

Alexander Rossi was 2nd quick in the #27 Andretti Honda.

Arrow McLaren Mexican ace Pato O’Ward (shown above) turned a lap of 23.326s to top the 2nd day of INDYCAR testing on the 1.5-mile high-speed Texas Motor Speedway oval in his Chevy.

Scott McLaughlin, who will pilot the No. 3 Pennzoil Yellow Submarine in this year’s Indy 500, was 12th quick.

The heavy testing schedule and imminent start to the season was not lost on Scott McLaughlin, who steps into a Team Penske IndyCar for the first time this year. McLaughlin underscored his excitement in a tweet replete with a fleet of exclamation points.

Graham Rahal described it as a “no-go zone.”

IndyCar drivers remain hesitant using the high-groove between Turns 1 and 2 at Texas Motor Speedway. That area remains slippery from a leftover rubber compound called PJ1 Track Bite from NASCAR races run in the fall of 2019.

“Unfortunately, the dark black stuff is, from the data we got, is about 20% less grip than the bottom lane and a half so it’s still going to be a no-go zone.”

At least that is the hope in order to put on the best show possible for fans.

“I think we’ll be able to put on a better show than what we had last year or the time before that,” Rahal said. “I’m sure when they repaved the track, they thought it was going to be the perfect combination. … Everybody here has done a great job to try to adjust to that and make it racy again. I think it’s getting closer.”

Outside of the high-groove questions, the drivers also touched on the doubleheader weekend and the challenges that presents.

“Honestly, I think the challenges are pretty similar. It’s going to be about maximizing the points over both [races],” Hinchcliffe said. “You can’t really afford to make too big a mistake in the first one because it’s going to have consequences for Race 2 so that’s always kind of something in the back of your mind on the first race. From a physicality point of view, the ovals are generally a little less physical but Texas is fast, man. It’s fast and it’s hot.”

Added Rahal: “It’s mentally very exhausting. This place wears you out. The physicality has gone up. The cars are a little bit heavier, the steering weight is a little bit heavier, it’s a little grippier this year than it was last year with the new downforce and tire package and everything else makes the cornering loads a little bit tighter. All those things being said, it’s a physical race as well.”

Tomorrow will see Dale Coyne Racing on track, with Ed Jones being accompanied by Pietro Fittipaldi who is returning to IndyCar action in preparation for his four races as oval sub for Romain Grosjean and is required to do a refresher test.

Cody Ware, son of race entry co-owner Rick Ware, is also expected to carry out his oval Rookie Orientation Practice to see if he is fit to try and run an oval race this year.