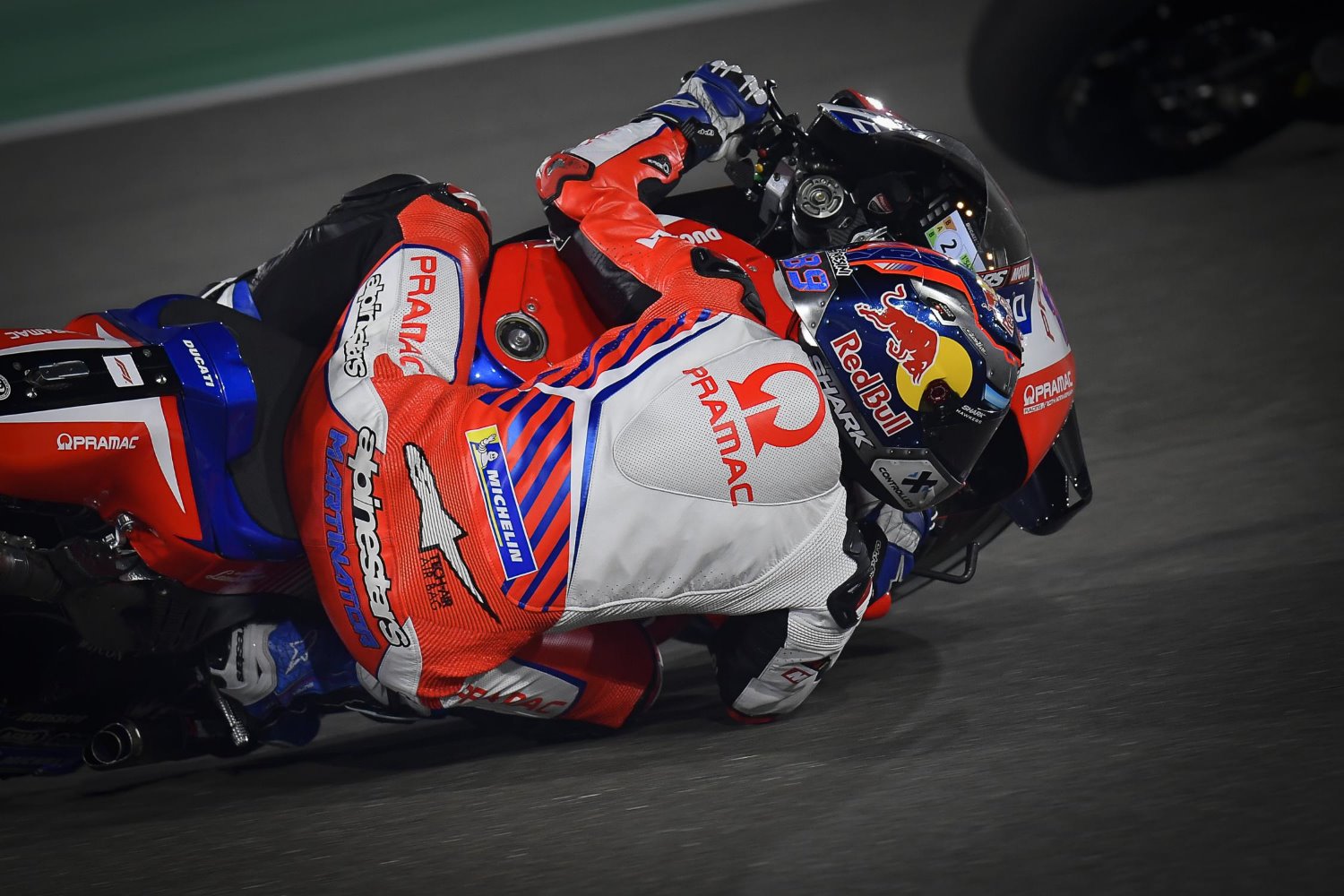 The Losail International Circuit hosted yet another mesmerizing MotoGP™ qualifying session and coming out on top, in just his second-ever premier class qualifying session, was rookie sensation Jorge Martin (Pramac Racing). The Spaniard set a 1:53.106 to beat teammate Johann Zarco by 0.157s who in turn edges out third place Maverick Viñales (Monster Energy Yamaha MotoGP) by 0.004s. An incredible Q2 dogfight in the desert.

Ahead of Q2 in Doha, a nail-biting Q1 session got underway and for the second time in two weeks, reigning World Champion Joan Mir (Team Suzuki Ecstar) was involved. After the first runs, Mir was three tenths clear of Brad Binder (Red Bull KTM Factory Racing), but the second set of flying laps saw some real changes.

Luca Marini (SKY VR46 Esponsorama) sat P2 as red splits lit up everywhere, but the Italian would lose out to Miguel Oliveira (Red Bull KTM Factory Racing) by just 0.008s, as Mir improved his time to safely make it through to Q2 by a couple of tenths. Job done by the Suzuki star in a brilliant Q1 session.

The Losail International Circuit then fell silent for a handful of minutes, before the 12 fastest premier class riders so far this weekend rumbled out of pitlane for the eagerly anticipated pole position shootout. Confident rookie Martin was the fastest rider from the get-go and set a 1:53.892 straight out the traps, immense from the Spaniard. Franco Morbidelli (Petronas Yamaha SRT) leapt up to P1 but once again, shadowing Mir, Martin was back on top of the pile. Now, his time was a 1:53.597 as Fabio Quartararo (Monster Energy Yamaha MotoGP) slotted himself into P2, just 0.017s behind Martin’s early benchmark.

After the first couple of flying laps, Martin, Quartararo and Aleix Espargaro (Aprilia Racing Team Gresini) was the provisional front row. Morbidelli and the Ducati Lenovo Team duo of Francesco Bagnaia and Jack Miller were on the second row with just over five minutes remaining, with World Championship leader Viñales nine tenths off in P9 – just behind Mir in P8.

Pushing hard, Viñales came out for his second run with the grit between his teeth. A couple of moments didn’t hamper the number 12’s lap time and Viñales went P9 to P1 with under two minutes to go. And then, Viñales was over a quarter of a second up on his next flying lap. Viñales nailed Sector 2, then nailed Sector 3 and taking the checkered flag, Viñales extended his advantage to 0.330s.

Now, attentions turned to a rookie on fire. Martin was up by 0.015s in Sector 2 on his final flying lap, with every other rider setting orange sectors. What came next was utterly sensational. Out of nowhere, Zarco gained over two tenths in the last split to snatch provisional pole by an absolute whisker – 0.004s. However, step up Martin. Doing it all on his own without a tow, the MotoGP™ new boy stormed across the line and went P1 by a tenth and a half. Incredible scenes! It wasn’t quite over yet though because Miller and Quartararo had clocked red sectors. Firing their way to the checkered flag, neither penetrated the front row but both improved their times to grab P4 and P5 respectively, but the headlines went the way of Martin.

To earn pole position in your second MotoGP™ qualifying session, his first in Q2, is unreal. The ‘Martinator’ shows us exactly why he’s nicknamed that as he reigns on Saturday in Doha, with Zarco making it Saturday Night Fever for Pramac Racing. Viñales once again lines up P3 at Losail, he’ll be praying the Ducatis get a rare bad start but as we saw last Sunday, dropping a couple of positions isn’t the end of the world now for Viñales.

Spearheading Row 2 is Miller who, at the end of the session inside the box, didn’t look best pleased. The Australian will of course have been aiming for the front row at least but seeing two Ducati rivals ahead of him on grid will hurt. Nevertheless, it’s one better than last week and Miller has every chance of stealing the holeshot from P4. Quartararo’s fifth place was less than the Frenchman would have expected too, but it’s far from a disaster. Like Viñales, he’ll be worried about the Ducatis off the line though.

One of those will be last week’s polesitter Bagnaia. P6 is the best the Italian could manage this time around at Losail, however, that front holeshot device could work wonders again and see him sail forward from the off. An interesting start awaits for the leading six riders, it’s a Ducati vs Yamaha affair from the front couple of rows.

Leading the third row is Aleix Espargaro after another fantastic performance. With the Yamahas and Ducatis looking strong in Qatar, starting P7 – one place higher than last week – is yet another job well done for the Noale factory. Joining the Aprilia star on Row 3 is a couple of Suzukis. Alex Rins sits 0.040s ahead of Team Suzuki Ecstar teammate Mir as the GSX-RR duo finish 0.6s shy from pole position. Not bad from the Suzuki riders, especially with Mir navigating his way through Q1, but there’s again work to do at the start of the race on Sunday. They’re in the mix though, and that’s what counts.

Rounding out the top 10 was Morbidelli, the Italian was just 0.009s from the third row in a quiet session, as leading Honda rider Stefan Bradl (Repsol Honda Team) and fastest KTM Oliveira complete the Q2 results in P11 and P12 respectively.

What a qualifying session, and what a day for Jorge Martin. We don’t see things like this happen very often, but now his and Pramac Racing’s attention will quickly turn to focusing on how to convert pole position into a great Sunday result. If Martin gets anything like the start he did last Sunday, then he’ll be into Turn 1 way ahead of the pack. Zarco looks set for another awesome Sunday, but Viñales is lurking on the Yamaha. In short, it’s going to be an unmissable MotoGP™ race in Doha.