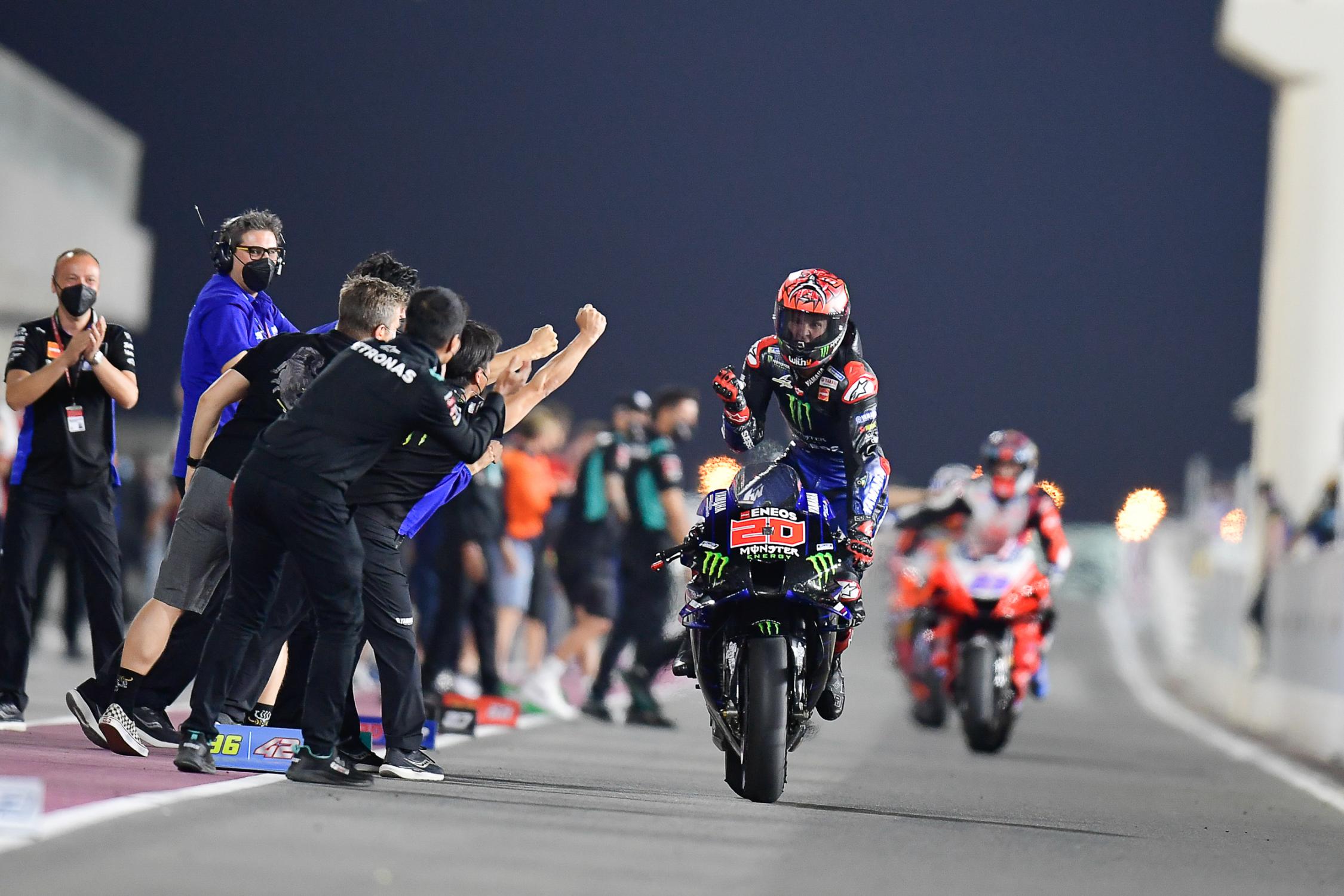 Fabio Quartararo made it two victories from two races for the Monster Energy Yamaha MotoGP team, after the Frenchman fought through the field to take victory at the Losail International Circuit. 2nd place Johann Zarco (Pramac Racing) handed France their first double premier class podium since 1954. History made there and history secured for rookie Jorge Martin too as the Pramac Racing star bags his maiden MotoGP rostrum.

The start was again a sight to behold as both Pramac Racing riders got away perfectly from P1 and P2 on the grid, but Qatar GP race winner Maverick Viñales (Monster Energy Yamaha MotoGP) went backwards as Miguel Oliveira (Red Bull KTM Factory Racing) propelled himself from P12 to P4 in an absolutely stunning start for the Portuguese star.

Both Suzukis got away very well too, as did third place Aleix Espargaro (Aprilia Racing Team Gresini) but it wasn’t a good start for the factory Ducati Lenovo Team riders or Quartararo. Jack Miller and Francesco Bagnaia didn’t make use of the Ducati front holeshot device and found themselves in the lower ends of the top 10.

Starting from fifth on the grid, Quartararo fell victim to the typical opening lap battle, dropping to eighth, just ahead of team-mate Maverick Viñales, who also dropped positions on the first lap.

As the race settled and the pace picked up. Riders knew it would be a race of two halves, with tire management playing a big role in the second visit to Qatar. With the soft compound the favored tire, Quartararo managed his pace comfortably in the leading group.

Quartararo showed his hand in the 2nd half early, the Frenchman climbed his way up to sixth after benefiting from a mid-race tangle for two of his rivals and immediately set after Alex Rins in a hunt for a podium finish. The hard-charging former CEV champion was quick to dispatch Rins, moving clear of the Suzuki rider at turn four, securing fifth place.

Quartararo moved past Johann Zarco with an inch perfect pass for third, whilst Viñales pulled off a carbon copy maneuver to that of his teammate as he passed Jack Miller. Just four corners later and it was Quartararo’s turn to lead. The fast French rider had a perfect run through turn 14 and positioned himself for a brave pass at turn 15, taking the lead with four laps to go.

However, it wasn’t an easy task for Quartararo, who slipped back to second on the front straight, but that didn’t stop the number-20 rider, who regained the advantage with a pass at turn four. While the rider from Nice hit the front, Viñales had put himself in podium contention after passing Johann Zarco, but a mistake from the Qatar Grand Prix victor saw him slip back to fourth place with work to do in the closing stages.

Back at the front, Quartararo had opened his lead to just under half a second to Jorge Martin and continued to break away from the chasing pack, eventually crossing the line to take victory by 1.4 seconds. Viñales continued to put pressure on the two Pramac Racing bikes in what was a stunning final few laps charge, but a small mistake at turn one saw him slip back behind Rins. The Spanish rider gave it everything on the final lap of the 3.34-mile-long Qatari circuit, but just fell short, wrapping up the Doha Grand Prix in a strong fifth place.

Fourth place was held by Rins as he and Viñales tussle it out, the Spaniards separated by just 0.022 seconds at the flag. Bagnaia was a further half a second behind the Spanish duel in P6 as the factory Ducatis get beaten by the Pramac riders, but it’s not a terrible result for the Italian. Mir eventually came home in P7 after a heated race, Binder cemented a brilliant P8 for himself and KTM as Miller takes a disappointing P9 for the second race in a row at Losail. Miller was in the thick of it throughout but it’s definitely not the result the Australian would have been looking for.

Aleix Espargaro picked up a P10, the Spaniard will be downbeat by that result but it’s another race that proves Aprilia and the number 41 are in the hunt. Bastianini recovers from a poor qualifying to finish just 5.550 seconds adrift of the win in P11, another beautifully worked race from the reigning Moto2™ World Champion, he beat compatriot Franco Morbidelli (Petronas Yamaha SRT) by two tenths. Pol Espargaro ran wide at Turn 1 with seven laps to go which cost him plenty of time, however, after a tricky weekend, HRC’s new recruit showed promise on Sunday to finish best Honda. HRC test rider Stefan Bradl (Repsol Honda Team) was right behind Pol Espargaro in P14, with Oliveira slipping down the order to pick up the last point.

8.928 seconds. That’s the gap between winner Quartararo and 15th place Oliveira in the closest top 15 finish we’ve ever seen. An utterly bonkers premier class races under the lights.

A breathless Sunday in MotoGP™ ends with Zarco emerging as the early World Championship leader. Two P2s give the Frenchman 40 points as Quartararo heads home from Doha level on points with teammate Viñales on 36 apiece – a great couple of weeks at Losail for the factory Yamahas. Stories everywhere we look. 2021 is here and wow, have we got a phenomenal World Championship on our hands.

Next up in a couple of weeks: Portimao and the Portuguese Grand Prix.

“I have no words. This race win is different from the previous three MotoGP races I‘ve won so far. After the last race I was a bit disappointed in myself. During this race it was totally different. I was thinking so well, I played a lot with the map and the tires. Nine or ten laps to the end I thought ’Right now is the moment to push and show our potential‘.

“It‘s great to finish in first position! I was so happy with FP4 because I felt like I was the only rider to do only high 1‘54s laps. So, we made a plan, but the team also told me to play it by feeling, and I did that really well today. I was feeling so good. When I overtook Zarco, I also immediately overtook Martin. I was so scared when I hit the debris on track. I thought ’Not a puncture, please!‘ because it made a bad sound. My last lap didn‘t feel as fast as the earlier ones, but it was enough for the win. Singing the French anthem with Zarco today was the best moment I ever had.”