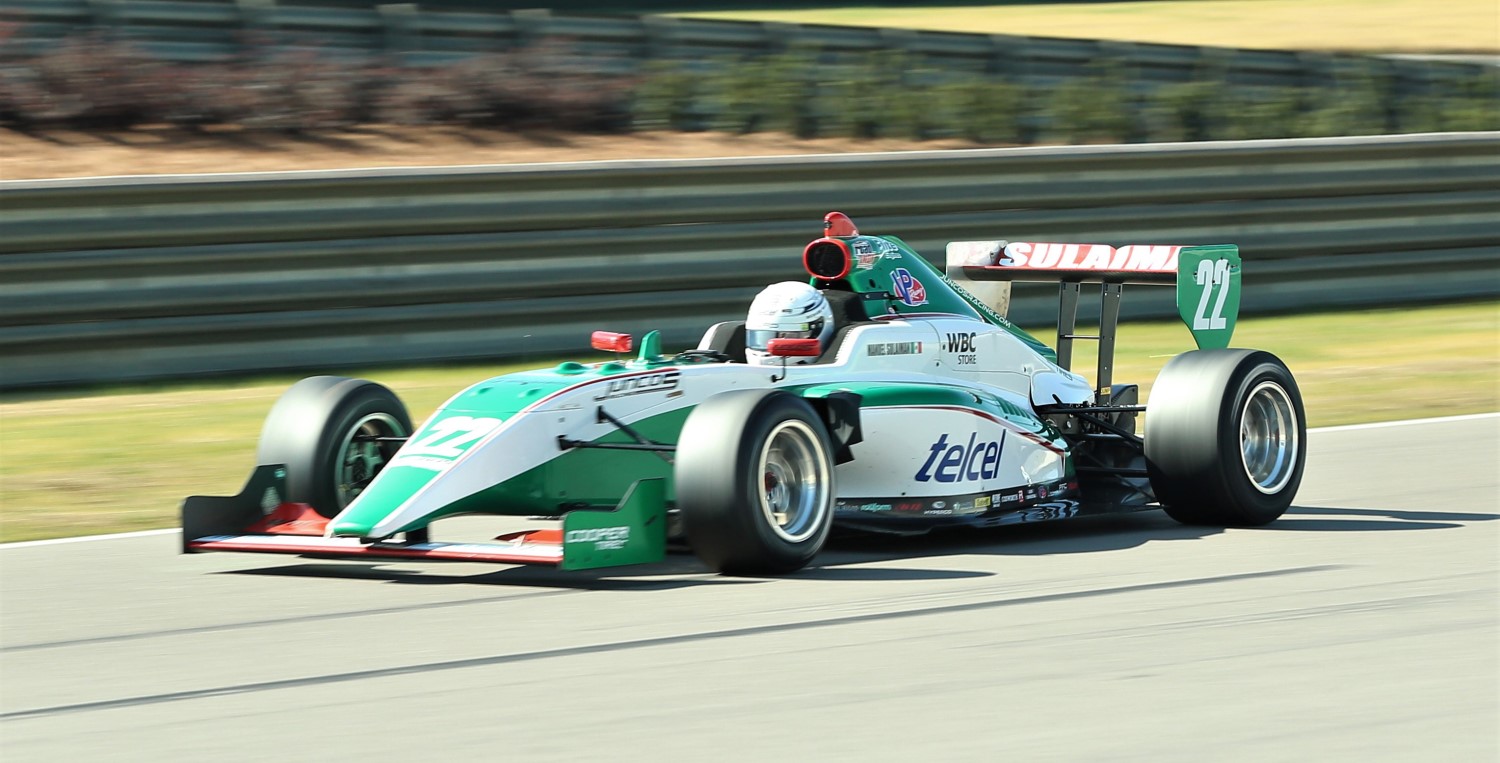 Drivers on the first two steps of the Road to Indy Presented by Cooper Tires open-wheel development ladder have spent a productive two days undertaking final preparations for the new racing season at Barber Motorsports Park. Christian Brooks, from Santa Clarita, Calif., laid down a marker prior to the start of the Cooper Tires USF2000 Championship by emerging fastest for Exclusive Autosport, while Juncos Racing’s Manuel Sulaiman (shown above), from Pueblo, Mexico, edged out 2020 USF2000 champion Christian Rasmussen (Jay Howard Driver Development), from Copenhagen, Denmark, in an extremely competitive 17-car field in the Indy Pro 2000 Championship Presented by Cooper Tires.

Tomorrow the attention will switch to a full day of testing for the top rung of the ladder, Indy Lights Presented by Cooper Tires, which makes its long-awaited return following a one-year hiatus due to the effects of the COVID-19 global pandemic.

All three championships will return to the challenging and undulating 2.3-mile natural terrain road course just outside of Birmingham, Ala., for the opening two races in conjunction with the NTT INDYCAR SERIES on April 16-18. More than $3.1 million in scholarships and awards will be up for grabs during the Road to Indy season.

Another banner year for Indy Pro 2000 seems to be in store, with the fastest three drivers taking advantage of ideal conditions this morning to be separated by less than a tenth of a second. Sulaiman topped the charts with a best lap of 1:16.8167, an average speed of 107.789 mph, narrowly edging out Rasmussen on 1:16.8310 and fellow rookie Kyffin Simpson (Juncos Racing), from Grand Cayman, on 1:16.8970.

Sulaiman’s joy was short-lived as his session ended prematurely following an incident at the final corner, Turn 17. The damage to his Tatuus PM-18 was enough to sideline him from the middle session of the day, although Sulaiman, who won twice during his rookie campaign in 2020, rebounded impressively to top the charts later this afternoon on 1:17.3783.

“It’s been a very positive weekend,” said Sulaiman. “We were super quick in the first session today and we were pushing the limits. I touched a bit of the grass and we weren’t able to finish that session. The team did a great job to get the car back out there for the final session and we were back at P1.

“We did a good number of laps this week, and all of that is good information for the first races of the year. These are my first days back in the car but I’ve adapted to the car and to the team very well. Juncos Racing has so much knowledge and they are so experienced, and I get along with everyone so well, so I’m really looking forward to the beginning of the season.”

Rasmussen was equally pleased, emerging as the fastest rookie, just ahead of the equally impressive Simpson.

“I’m definitely still getting used to the new car,” said Rasmussen, whose USF2000 championship season earned him a scholarship valued at over $325,000 to make the step up into Indy Pro 2000. “I haven’t had that many days with it. But we’re getting there. It’s been a good couple of days and I know we’re getting close.

“It’s a great pleasure to drive the scholarship car this year – they did a great job with the livery! I’ll look great out there, but more than that, it’s such an honor to be a part of that program. It brings a bit of pressure since you want to go out and show that you’re not just worthy of a USF2000 scholarship but that you can compete on the next level. The Road to Indy is all about developing drivers and that’s what I’m trying to do. I’m looking forward to hopefully competing for a championship again this year.”

Remarkably, 10 different drivers ended one or more of the five test sessions run over the two-day period among the top three.

And the only driver to top the charts more than once, rookie Wyatt Brichacek, from Johnstown, Colo., ended up a lowly 13th on the overall charts for the Jay Howard Driver Development team with a best lap of 1:17.3432.

“The higher downforce and bigger tire seem to suit my driving style better,” said Brichacek, who struggled last year in USF2000 but set the pace in both sessions on Sunday and repeated the feat in the second of three sessions today. “I seem to feel more comfortable in this car compared to the USF-17. I’m meshing well with my engineer and everything just felt really good this weekend. Barber is a really technical track and I feel as though I’ve learned more about how to carry speed through the high-speed corners, and that will really help me. I’m glad to be back with the Jay Howard boys and I’ve learned a lot from Christian, so I think we’ll help each other this year.”

The top 12 this morning all set times within a half-second of Sulaiman’s benchmark. New Zealander Hunter McElrea, who finished fifth in the points table last year after winning the final race at St. Petersburg, Fla., was within a couple of tenths of Sulaiman on 1:17.0060 for Pabst Racing, with Irishman James Roe (Turn 3 Motorsport) and Russian Artem Petrov (Exclusive Autosport) also within the same tenth of a second.

The 17 drivers completed a total of 1,746 laps between them, with the entire field separated by just 1.3088 seconds.

Brooks Sets the Pace in USF2000

After scoring his first victory in the final race of 2020 on the streets of St. Petersburg, Fla., Brooks, 20, came out of the blocks fast in the first official test of the new campaign. He was quickest in both sessions yesterday and took advantage of perfect, cooler conditions this morning to top the charts at 1:20.7981, an average speed of 102.478 mph. The time comfortably eclipsed the existing qualifying record of 1:23.009 set by Englishman Michael Epps way back in 2014.

“It feels great to finish the weekend on the top of the charts,” said Brooks, last year’s Hyperco Rookie of the Year. “The Exclusive Autosport car has been on rails all weekend long. We definitely put in some consistent results. We know it is practice but it always feels good to be on top and it is definitely a nice confidence booster going into the season. We are just going to put our heads down and push for some good results at Barber.”

Brooks’ best was just over a tenth of a second faster than former teammate Prescott Campbell, from Newport Beach, Calif., who has joined DEForce Racing for his own sophomore campaign.

“I’ve really enjoyed working with DEForce throughout this off season,” said Campbell. “I’ve become very close with the team, testing at their home track (MSR) in Houston. We had a plan for this test, stuck to it, and we’ve learned a lot. The pace that comes along with that is great and I hope this puts us in a good position for the first round of the series. It’s also a good chance to look at the competition: I raced with Exclusive last year and I knew they would be strong, especially Christian. I’ve seen how he works, and he won the last race of the season in 2020. It’s what we expected and I think we’ll be able to take the fight to them.”

Campbell’s DEForce teammate Nolan Siegel, from Palo Alto, Calif., was third quickest this morning and, in the absence of Brooks, ended the test in style by being fastest in the fifth and final session this afternoon.

Josh Green, from Mount Kisco, N.Y., turned some heads by posting the fourth fastest time for Illinois-based Turn 3 Motorsport, which is making its debut in USF2000 this season with a two-car team. Uniquely, Green was the only driver among the top 18 to record his best lap, 1:21.2641, in the midday session today when he topped the charts ahead of Siegel, Campbell and Brooks.

Right behind them, though, was impressive USF2000 debutant Jace Denmark, from Scottsdale, Ariz., also for Pabst Racing.

“It’s comforting to see that we’re in the top 10, that was my goal for the weekend,” said Denmark, who was fastest of the 14 rookies in all five sessions. “I came into the test wanting to learn from my teammates and see what other drivers are doing on track. The most important thing to learn here is your comfort level and where the edge is. There’s a lot of trust required here, with all the fast and blind corners and all the elevation changes, so learning the limit of the car and how you relate that to what you’re feeling is so important – and you definitely feel it, especially in your neck and back. But you want to get closer to that limit with each session and be comfortable in that window – so on race weekend, you can get to the limit as quickly as possible.”

Veteran Yuven Sundaramoorthy, from Oconomowoc, Wis., was eighth quick aboard a third Pabst Racing Tatuus USF-17. The top 10 was completed by rookies Billy Frazer (Exclusive Autosport), from Pukekohe, New Zealand, and Myles Rowe, from New York, N.Y., who made a good impression with the new Force Indy team.

A total of 2,725 incident-free laps were completed by the 23 drivers during the course of the two-day test, with the top 16 blanketed by less than one second