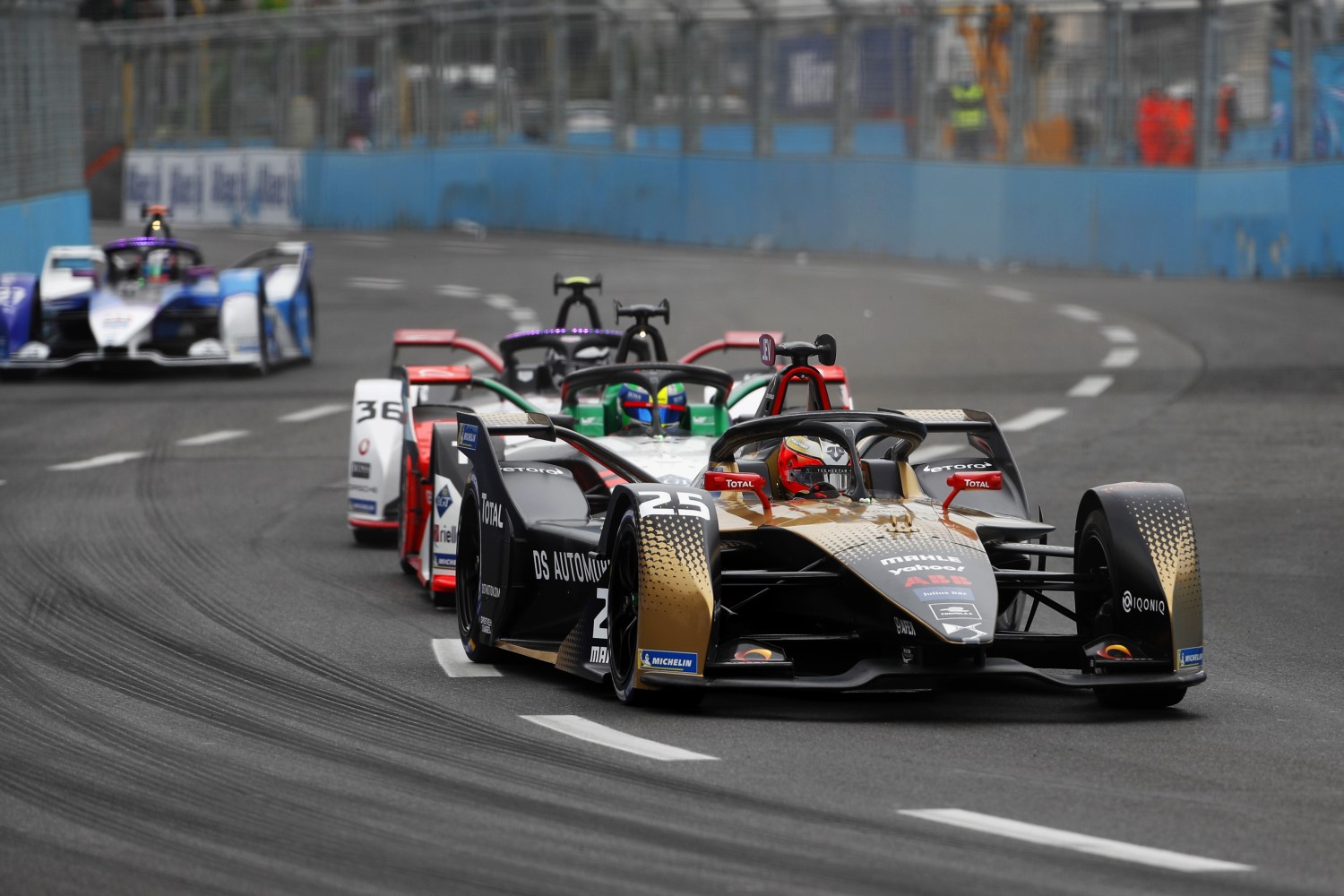 Jean-Eric Vergne (DS TECHEETAH) picked his moments perfectly to drive from fifth to victory in the opening race of the Rome E-Prix double-header around the streets of the EUR District, heading home Jaguar Racing pair Sam Bird and Mitch Evans – the British squad’s first double podium.

Vergne timed his ATTACK MODE activations to a tee, with the top 15 runners separated by a little over five seconds at the half-way stage. He held his nerve throughout under intense pressure from a number of drivers, not lead his closest challenger Lucas di Grassi (Audi Sport ABT Schaeffler).

The Brazilian suffered a late technical issue inside the last five minutes which saw him slow and relinquish the lead to Vergne, and caused a concertina effect behind with Stoffel Vandoorne coming off worst – spinning into the barriers in avoidance after a strong recovery drive.

The Safety Car was required for the clean-up operation, and the race finished behind the Mini Electric Pacesetter, with Vergne at the head of the pack ahead of the Jaguar duo who’d clambered up from 10th and 13th, respectively.

A Safety Car start was deemed necessary in the mixed conditions – drizzle in the air and sections of the track slimy with a good covering of water.

With five minutes gone, the pack was released to race and Porsche’s Andre Lotterer immediately tried to make a move stick on leader Vandoorne as Bird made his way into ninth into Turn 4.

The Porsche and the Mercedes-EQ came together as Vandoorne closed the door, and Nissan e.dams’ Oliver Rowland was able to profit as the lead pair tumbled down the order – Vandoorne to 13th, Lotterer recovering to 7th.

The circuit remained slick in places, with patches of Tarmac holding puddles and forcing drivers off-line to find grip, while 10 seconds split the top 15 runners – no room for error.

The race leader was handed a drive-through penalty for using too much power – with the car perhaps spiking over 200kW thanks to one of the circuit’s many bumps and undulations. Unfortunate for the Brit, but di Grassi accepted the gift and first position with open arms.

With half an hour plus one lap on the clock, di Grassi had Vergne’s DS TECHEETAH bolted to his diffuser – the double champion scenting his opportunity that Moet & Chandon winners’ champagne. Envision Virgin Racing’s Robin Frijns had steered his way into third, with de Vries, Porsche’s Pascal Wehrlein and teammate Lotterer rounding out the top six.

The only runner to have taken their first ATTACK MODE activation inside the top 10 was Vandoorne, sitting ninth with 9 laps gone. The move off-line through the activation zone is particularly punitive at the Marconi Obelisk Hairpin in Rome and no driver wanted to be the first to blink with just four seconds between the top-10 runners.

The white and black Porsches were locked in combat with the two green and black Jaguars for fifth place, with Bird heading Evans and right on the back of the Stuttgart squad’s driver pairing. Bird made yet more progress with a move beyond Lotterer’s damaged Porsche for sixth a lap later – four spots gained for the Brit.

Vergne was the first to blink and take that initial dose of ATTACK MODE. He found a little pocket of space ahead of Bird in fifth and pinched fourth almost immediately from Wehrlein to keep up his forward momentum after sweeping through that tricky ATTACK MODE activation zone.

Jumping first was brave, and the right thing to do as it happened. Vergne fell into space, made up ground and hunted down the race leader – and duly made it by di Grassi when the Audi leapt through the ATTACK MODE zone.

Inside the last twenty minutes plus a lap, Frijns was now hounding race leader Vergne with ATTACK MODE in-hand. The Frenchman’s DS TECHEETAH would need to be wide with everyone else in the top 10 still in ATTACK MODE with that 35kW boost.

Into the last quarter hour, and Vergne was once again the first of the lead pack to jump for his second compulsory ATTACK MODE activation.

Once it had all shaken out, the DS man had again made it work – dispatching de Vries who’d briefly taken the race lead. A coming-together between de Vries and di Grassi as the Audi scrambled to follow through meant the DS could scuttle clear at the head of the pack.

Bird’s progress continued, selling the dummy on former teammate Frijns and hounding and dispatching Vandoorne for fourth spot with 10 minutes plus one lap left on the clock. Bird the last of the late brakers, as ever and that wouldn’t temper Vandoorne’s handy recovery too much. The Jaguar man made it by de Vries for third, too, with another late dive out of nowhere on Lap 19.

Live timings and how to watch the race 👉 https://t.co/sHOKGxvLZW#RomeEPrix pic.twitter.com/qAEQd705lp

On Lap 20, di Grassi sent a move on leader Vergne at Turn 4 to pinch first. He wasn’t able to get away, though, and on Lap 21 he slowed with a terminal technical issue on the way up the hill. The chasing pack had to take evasive action with the two Mercedes’ coming together – Vandoorne spat out from fourth in a spin and into the barriers at pace.

That all saw Sam Bird stay top of the Drivers’ table ahead of Frijns and de Vries, while Jaguar Racing remains atop the Teams’ running.

“Today was the first race weekend with the new powertrain and it felt really good. The team did a great job to fix the car in time for the race after FP1. My engineer was very good in giving me directions on energy management and Attack Mode. I had very good management during the race and it was a question of making of the most of the energy reduction. When Lucas tried to overtake me I didn’t stop him because I knew we had more energy and there was a long way to go. I knew that I could’ve taken him.”

“We had a really good start as a team with another podium finish. I won here before, but I can’t compare the two tracks. The circuit was very difficult, but I am really pleased with the performance. It felt really comfortable and we didn’t waste too much time in overtaking. JEV defended very well and I’m happy with the result.”

“This is our first double podium as a team – congratulations to everyone involved and Sam, we work really well together. It wasn’t an easy race to manage at all. The conditions weren’t easy and starting in the middle of the pack, you can easily get caught up in crashes. I’m glad we started under the safety car as T1 could’ve been tricky, but our pace was extremely strong.”