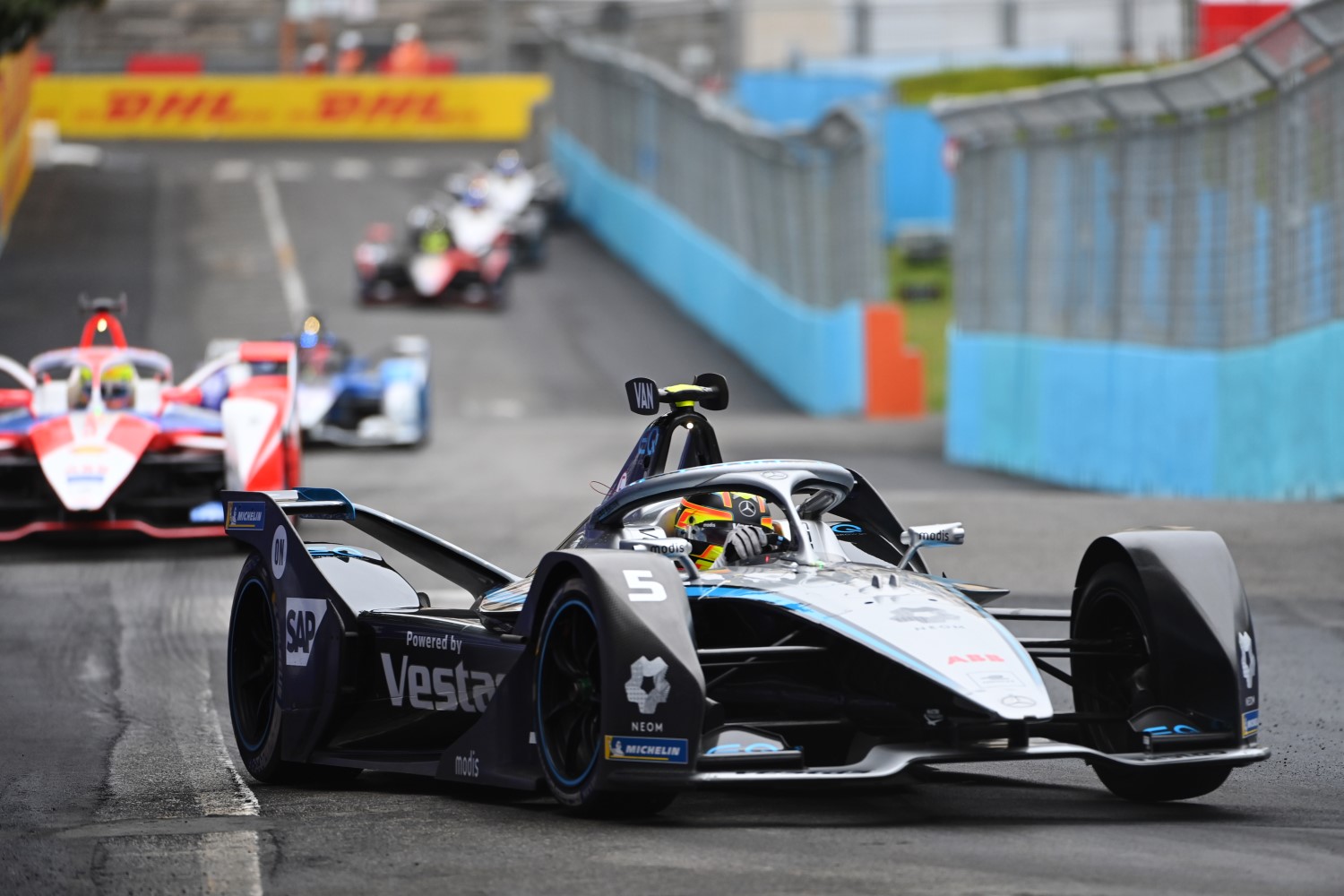 Mercedes EQ driver Stoffel Vandoorne took the lead early in Round 4 of the 2021 Formula E season after the leaders took themselves out, and led the rest of the way to win the 2nd half of the Rome E-Prix doubleheader.

Vandoorne had to survive a 1-lap shootout after a late full-course caution but managed his energy perfectly in holding off Alexander Sims in the Mahindra, Norman Nato in the Venturi and Pascal Wehrlein’s Porsche.

Eduardo Mortara rounded out the top-5 in the 2nd Venturi in a race that had zero fans in attendance on the streets of Rome Italy.

Polesitter Nick Cassidy (Envision Virgin Racing) span out of the lead on the opening lap with Nato briefly heading the pack before Wehrlein snatched top spot. Vandoorne then made it count through the first ATTACK MODE activation and drove like he was “on another planet” according to Wehrlein. The Belgian bossed things from there to the end despite a frenetic final lap thanks to a late spell behind the Safety Car.

As in Round 3, Round 4 got going behind the Safety Car with a few slimy patches left around the circuit under the trees after this morning’s wet practice and qualifying sessions.

It was a disastrous start for Cassidy once the field was released, as the pole man locked up the rear tires to spin at Turn 7, which saw him fall to 11th position – the lead handed on a platter to Nato.

WHAT A RACE START! We go green in Rome for Round 4 🇮🇹

Three laps in and the Kiwi set about battling back, moving beyond both Sam Bird (Jaguar Racing) and Sebastien Buemi (Nissan e.dams) for ninth while race leader Nato had Pascal Wehrlein’s Porsche all over his rear diffuser.

The Frenchman couldn’t hold on long, with Wehrlein snapping out of the slipstream to pinch the lead on Lap 3 and Vandoorne followed immediately with a muscular pass at the Marconi Hairpin. First to third in half a lap for Nato.

Cassidy’s recovery reached seventh spot come Lap 4, but Rowland gave the Envision Virgin Racing car a nudge into Turn 14, forcing the Kiwi into the Tecpro barriers and all the way to the back of the pack. No luck for Cassidy, who reported his earlier lockup from the lead was the result of a software glitch.

As the first round of ATTACK MODE activations began to shake out, it looked like Vandoorne had been the big winner. Wehrlein was last of the front-runners to jump and it cost him first spot – the Mercedes man getting the better of the Porsche driver in the battle of the Stuttgart manufacturers.

Heading inside the half hour plus one lap, and contact between Sebastien Buemi and Lucas di Grassi (Audi Sport ABT Schaeffler) in mid-pack resulted in a mess of carbon fiber – the latter accusing the former of a “crazy move” that spun him on the back straight into the wall. A Full Course Yellow was the result while the Audi was cleared.

Five minutes later as the race went green once again, Sims caught Wehrlein napping to steal second spot with Vandoorne scampering five seconds clear of the pair of them – the Belgian using his advantage to use ATTACK MODE number two.

Through the second round of ATTACK MODE of three for this race, and into the final 20 minutes plus a lap, DS TECHEETAH’s Antonio Felix da Costa was also making progress – slicing beyond Mitch Evans (Jaguar Racing) and Buemi in quick succession for eighth, up from 15th on the grid at the start. Five minutes later, he jumped by Rowland for seventh in that tricky Turn 7 braking zone, though in any case, the Brit was slapped with a 10 second penalty for that earlier move on Cassidy.

It remained as you were in the podium positions with Vandoorne leading Sims and Wehrlein. Nato held fourth, his teammate Mortara fifth and Guenther sixth. That was, until Lap 17 when Nato slipped up the inside of Wehrlein for a provisional podium – top stuff from the rookie.

With a little over five minutes plus one lap to run, a shunt for Rene Rast as the Audi driver scrapped on the cusp of the points and pushed a little too far meant another appearance this weekend for the Mini Electric Pacesetter Safety Car. Leader Vandoorne saw his ample advantage quashed with the pack now backed up – it had all looked to be in-hand for the Belgian.

The race became a one lap dash and the Mercedes led away, using FANBOOST as a defense. In-behind Vandoorne, it was all going off with Mortara producing the save of the season to hold Guenther off and keep it out of the wall.

Meanwhile, the pre-race championship leader Sam Bird, and the man third in the running, Nyck de Vries, were wiped out in contact as they fought for points on the cusp of the top 10 with Rowland also involved.

Vandoorne held firm to take the checkered flag and redeem his race weekend after falling from pole after contact in Round 3. Sims followed second just 0.6 seconds back with Nato taking a first Formula E podium on track. A post-race penalty for energy overuse saw him unceremoniously demoted though, with Wehrlein profiting to fill that final podium berth.

Ian James (Mercedes Team Principal):
“I said it yesterday already: this team has shown resilience all weekend. The team did an outstanding job working until the late hours to ensure both our cars were repaired for today’s track action. It wasn’t easy, but they delivered an amazing performance and had the massive amount of work turned around in time for FP3. After the tough day yesterday, we pushed the reset button, and approached this day as we always should be doing and have done so far: a new day, with new opportunities for the team. Today brought us that sought-after redemption.

I don’t like calling a performance dominant, as that would undermine the performances of all other teams and drivers today, but I think Stoffel’s performance can be called near perfect. He stayed out of trouble in the opening laps of the race, and then managed to fight his way up to the top. Congratulations to him, and all of the team who made this possible.

Nyck was less lucky again today. He was in the fight for points for a long time, coming all the way from P17, but we saw what happened in the last lap; he had an incident, and was unable to finish the race. It’s unfortunate to see him not having been able to score points this weekend, but he’s once again shown what he is capable of.

Leaving the second race weekend of the season with a second win of the season feels very good. But we also know we didn’t turn every opportunity we got this weekend into a result – whether that was in or out of our control. We’re thrilled to be racing again in two weeks’ time again in Valencia, so we can show the world what we’re made of.”

Stoffel Vandoorne:
“What an amazing victory! It makes up for what happened yesterday to some extent. Winning today’s race sure feels good. Yesterday was a real roller-coaster of emotions. First off, pole position and then our great pace followed by the incident on the first lap and subsequent charge through the field to catch up, and then finally; the accident when I had to avoid Lucas. It was all pretty frustrating, and we probably already should have gotten good results yesterday.

“To end the weekend on such a high today feels fantastic. I would like to thank everyone in the team and especially my mechanics, who had their work cut out to get the car fixed after the accident. But everything was just perfect today, including the team’s strategy, which helped me get the drop on Sims. I wasn’t sure what to expect during the safety car period just before the end but still had fan boost, so I could defend my position. It didn’t feel exactly great after comfortably being in the lead, but I didn’t put a foot wrong over the final lap and managed to secure the win, which is what counts in the end.”

Alexander Sims
“The team seemed pleased with the result today. The gap to overtake Pascal was pretty narrow, but we reacted well and had a successful strategy. I am happy with the race and the way we used Attack Mode. It is my second weekend with Mahindra Racing and we still have lots to learn with pace and qualifying. We’ll keep working and trying.”

Pascal Wehrlein
“It feels good to be on the podium, but I am still disappointed as I was leading the race at one point. We missed some good opportunities but it was a good day for us overall. In the race and qualifying it feels like we are lacking pace. We need to keep working and improve for the next race. I’m pleased with my result on my second weekend with the TAG Heuer Porsche Formula E Team. Stoffel was extremely fast today so congratulations to him on his first win of the season!”