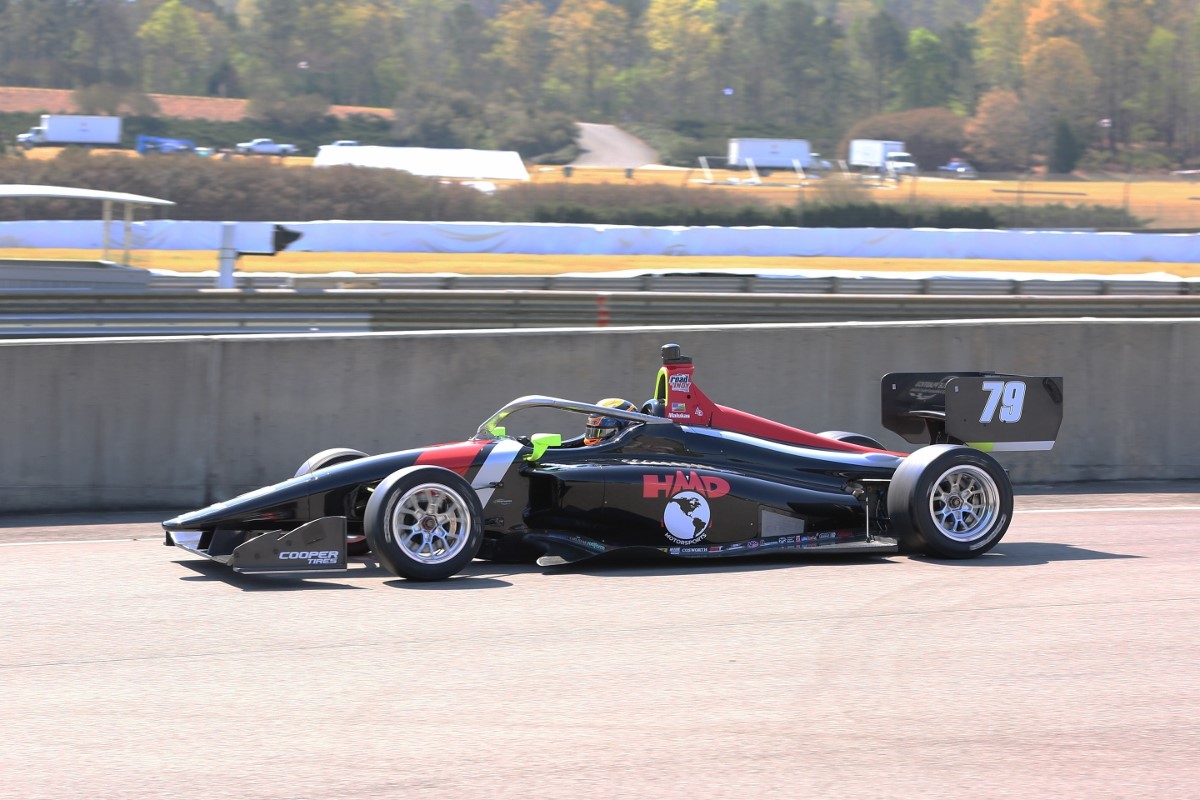 It’s time to go racing! A protracted off-season is finally at an end, teams and drivers have completed their exhaustive testing programs, and now some of the eagerly anticipated questions can begin to be answered. A new year for the Road to Indy Presented by Cooper Tires kicks off this weekend, April 17-18, at Barber Motorsports Park in conjunction with the opening round of the 2021 NTT INDYCAR SERIES. The event marks the Road to Indy’s first races in Alabama since the 2017 season.

All three levels of the world renowned open-wheel driver development program – Indy Lights Presented by Cooper Tires, the Indy Pro 2000 Championship Presented by Cooper Tires and the Cooper Tires USF2000 Championship – have attracted high-quality fields which will do battle over two races on the undulating and challenging 2.3-mile, 17-turn road course situated just outside Birmingham, Ala. At stake this year is a range of scholarships and awards valued at over $3.1 million which will enable talented young drivers to progress from the grass roots of the sport to the pinnacle, the NTT INDYCAR SERIES and the Indianapolis 500.

GMG/HMD Lays Down the Gauntlet

The primary focus this weekend for the Road to Indy will be the return of Indy Lights, the top rung on the ladder, following a one-year hiatus caused by effects of the COVID-19 global pandemic. The Andretti Autosport powerhouse had swept the championship in each of its last two years through the efforts of talented youngsters Patricio O’Ward and Oliver Askew, but already a serious new challenger has emerged in the form of Global Racing Group with HMD Motorsports, which led the way convincingly during last week’s traditional Spring Training open test at Barber.

Teammates David Malukas (shown above) , from Chicago, Ill., Linus Lundqvist, from Stockholm, Sweden, and Danish-born Benjamin Pedersen, who now hails from Seattle, Wash., dominated the top of the timing charts, separated by a hair over two tenths of a second. But hot on their heels were the Andretti pair of Robert Megennis, from New York., N.Y., and Kyle Kirkwood, from Jupiter, Fla. All five were blanketed by just 0.4426 of a second.

Malukas, 19, and Megennis, 21, have experience on their side after finishing sixth and fifth, respectively, in the 2019 Indy Lights title-chase, although Barber was not on the schedule at the time. Kirkwood, meanwhile, is seeking an unprecedented three consecutive Road to Indy Scholarships after dominating the USF2000 series in 2018 and adding the Indy Pro 2000 title in 2019. Kirkwood is especially anxious to commence the season after the 22-year-old’s plans for 2020 were put on ice due to the pandemic.

Additional interest this week is provided by the long-awaited return of the Carlin team, Indy Lights championship winners with current NTT INDYCAR SERIES driver Ed Jones in 2016; the graduation of last year’s Indy Pro 2000 champion Sting Ray Robb, from Payette, Idaho, with 2015 and 2017 championship-winning team Juncos Racing; and the enhanced safety aspects provided by a new cockpit protection device which has drawn effusive praise from the teams and drivers.

Official practice for the Indy Lights Grand Prix of Alabama Presented by Cooper Tires will commence on Thursday afternoon with the opening 30-lap race set to start at 12:15 p.m. CDT on Saturday, April 17. The green flag for the 35-lap Race Two is slated for 12:20 p.m. on Sunday, immediately preceding the NTT INDYCAR SERIES headline event.

Coverage can be found on Peacock Premium in the U.S., on REV TV in Canada and internationally via live streaming on the Road to Indy TV App and at RoadToIndy.TV and indylights.com.

Mexico’s Manuel Sulaiman, who won twice during a solid rookie campaign in 2020, topped the timing charts following two days of testing last week after joining the Juncos team, but only by a few fractions of a second over last year’s USF2000 champion Christian Rasmussen, from Copenhagen, Denmark, who is stepping up with Jay Howard’s team. Fellow rookie Kyffin Simpson (Juncos Racing), from Grand Cayman Island, whose season already has been given a flying start after romping to victory in the opening three Formula Regional Americas races of the season last month in Georgia, also was within a few thousandths of Sulaiman.

Very much in the mix were returning drivers Hunter McElrea (Pabst Racing), from New Zealand, who claimed a breakthrough victory in the final race of the 2020 season on the streets of St. Petersburg, Fla., and Artem Petrov – coincidentally from the “other” Saint Petersburg, in Russia – who has joined the Exclusive Autosport team after claiming two race wins in 2020. Watch out too for Petrov’s teammate, Braden Eves, the 2019 USF2000 champion from New Albany, Ohio, who returns after his race-winning campaign in 2020 was curtailed by a crash at Indianapolis.

Other highly rated rookies include Irishman James Roe, who posted the fifth fastest time for Turn 3 Motorsport, and USF2000 graduates Cameron Shields (DEForce Racing), from Australia, and Reece Gold (Juncos Racing), from Miami, Fla. All of the top eight recorded laps within less than a half-second of each other during last week’s test.

And don’t count out RP Motorsport USA either. The pandemic sadly sidelined the Italian-based organization’s hopes of defending its 2019 crown, won by Kyle Kirkwood, but the team will be back with two talented young chargers in third-generation Brazilian Enzo Fittipaldi and Englishman Enaam Ahmed. Both have championship-winning credentials from Europe and could be seen climbing up the timing charts during last week’s Spring Training test.

At stake this season is a scholarship valued at over $718,000 which will enable the series champion to move up to Indy Lights in 2022.

The wide-open Indy Pro 2000 field will see action on all four days, with testing and one official practice session on Thursday, two separate qualifying sessions on Friday and then two races, the first over 25 laps at 11:10 a.m. CDT on Saturday and the second, over 30 laps, at 9:15 a.m. on Sunday. Global live streaming can be found on the Road to Indy TV App and at RoadToIndy.TV and indypro2000.com.

Echoing the intensity of the two highest levels on the Road to Indy ladder, USF2000 also seems set for a sensational season of racing. A field of over 25 competitors is expected for the opening round, all of them chasing a champion’s prize worth over $400,000.

Impressively, the fastest 16 drivers – representing seven different teams – at Spring Training were bracketed by less than a second. Pride of place was taken by Christian Brooks (Exclusive Autosport), from Santa Clarita, Calif., who narrowly headed the DEForce Racing pair of Prescott Campbell, from Newport Beach, Calif., and Nolan Siegel, from Palo Alto, Calif.

Brooks, 20, Brazilian Kiko Porto (DEForce Racing), 17, and Michael d’Orlando (Cape Motorsports), 19, from Hartsdale, N.Y., are the only drivers in the field with a USF2000 victory to their credit. Brooks and Porto achieved their maiden wins during last year’s series finale at St. Petersburg, Fla., while d’Orlando, who is the top returning driver after finishing fourth in the 2020 title-chase, earned his laurels a little earlier at Mid-Ohio.

Other potential front-runners will include fellow series veterans Josh Green (Turn 3 Motorsport), 18, from Mount Kisco, N.Y., and fellow Team USA Scholarship winner Simon Sikes, 20, from Augusta, Ga., who did not attend the Spring Training test but has already shown well in winter testing for the Legacy Autosport team.

Well over half of the field will be comprised of USF2000 rookies, many of whom already have achieved previous success either in the karting ranks or other junior open-wheel series. Impressively, fastest of them all last week was 16-year-old Jace Denmark, from Scottsdale, Ariz., driving for Pabst Racing.

The Cooper Tires USF2000 Grand Prix of Alabama will commence with testing and practice on Thursday, a pair of qualifying sessions on Friday and then two races – one of 20 laps, the other 25 – on Saturday at 8:00 a.m. and 3:50 p.m. CDT. The Road to Indy TV App, RoadToIndy.TV and usf2000.com will feature live streaming coverage of USF2000 on-track activity.