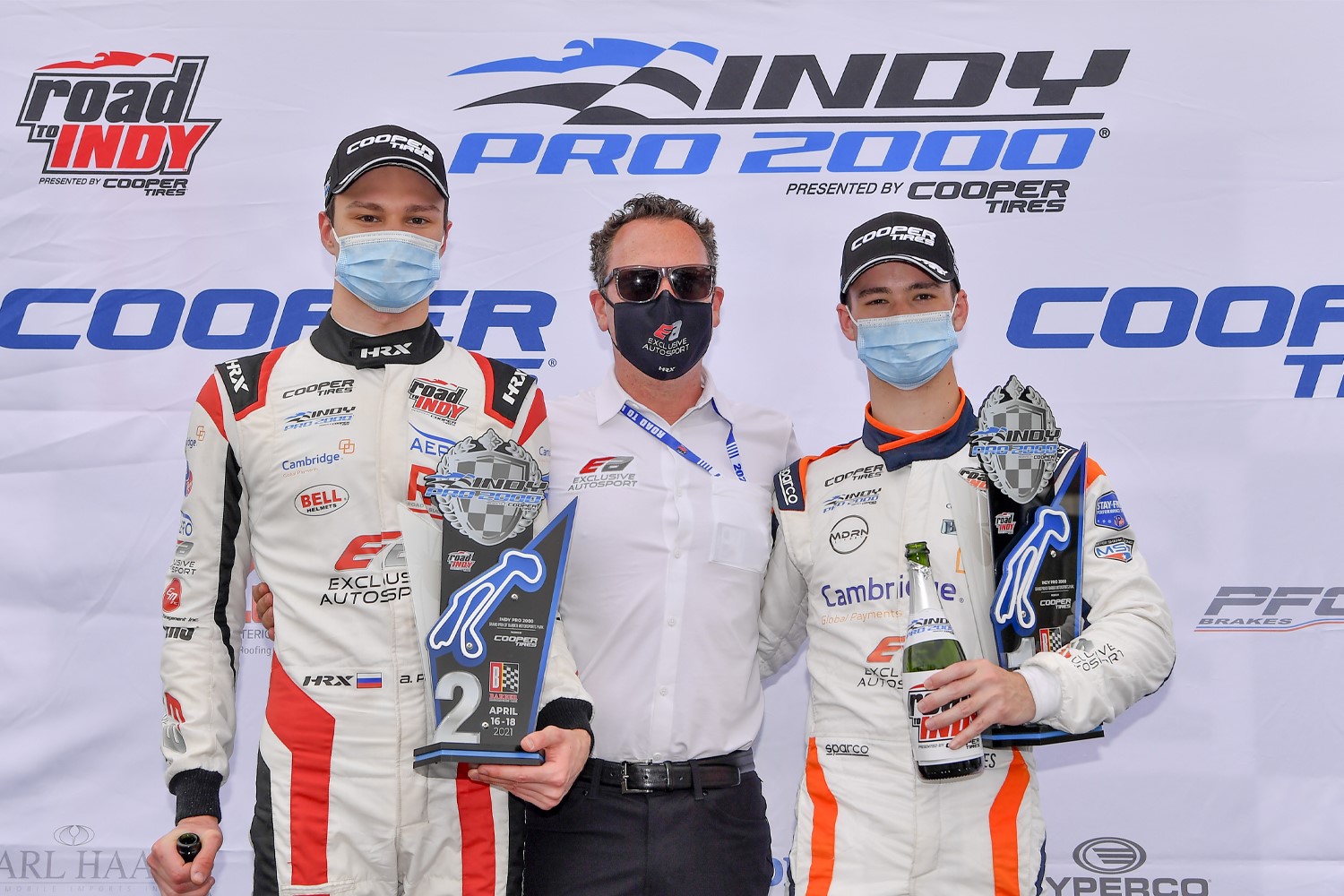 Exclusive Autosport returned to the rolling hills of Barber Motorsports Park this past weekend for Rounds 1 and 2 of the Indy Pro 2000 Championship Presented by Cooper Tires. The weekend event featured cloudy and sunny conditions, however, the final round on Sunday was under sunny and warm weather. American Braden Eves showed right away that he was ready to attack the season, grabbing the pole for Race 1 in the Cambridge Global Payments PM-18, setting a new track record in the process. Eves followed up his qualifying performance by leading every lap of the race from green to checker. Russia’s Artem Petrov scored a pair of podium finishes over the weekend finishing second to Eves in Race 1 before advancing from sixth to third in Race 2. The Exclusive Autosport duo now sit first and second in the championship standings.

“I’m extremely happy with our first outing of the season,” said Michael Duncalfe, Team Principal. “At the start of the weekend, we announced our extended partnership with Cambridge Global Payments which would be carried as title sponsor on Braden’s Indy Pro 2000 car, title sponsor on our USF2000 driver Billy Frazer’s car and associate sponsor on all other EA cars. Eves and Petrov work quite well together and it’s really showing. Coming away with three podiums and first and second in the championship is a great start to the season. I can’t thank Cambridge enough for the constant support and continued partnership with them. I also want to sincerely thank the EA crew. They work so incredibly hard both at the track and in the shop. Their dedication and commitment to their craft and the team is so appreciated. We wouldn’t have had the results on track this weekend without them.”

The doubleheader event kicked off on Thursday morning with two unofficial test sessions. Eves and Petrov constantly kept clicking off fast laps, with Petrov finishing on top of Test 2. The team opted out of the official practice later in the afternoon, as did most the other teams in order to save tires for qualifying and the two races. Friday’s action kicked off with Qualifying 1 and EA jumped to the top of the charts late in the session as Eves clinched the pole with a new track record. Petrov was only 0.0747 seconds behind for second place, and he too was under the previous track record, which belonged to the team when Parker Thompson drove for EA in 2018. Later in the day in Qualifying 2, a red flag ended the session early and Eves would have to settle for a fourth-place starting spot while Petrov’s pace lined him up on the outside of row three from Race 2.

Saturday’s Indy Pro 2000 Race 1 took place midday under sunny skies. From the green flag, both Eves and Petrov jumped to an early lead and continued the trend to the checkered flag. Eves, 22, grabbed a bonus point for leading the most laps in the process. Race 2 was held on Sunday morning, and right away, both drivers were on the attack. After just two turns, the drivers had improved their positions to third and fourth and by turn five, Petrov was able to overtake Eves for the third spot. Both drivers stalked the leaders, but by the end they had to settle for third and fourth.

In the Indy Pro 2000 Championship Presented by Cooper Tires point standings, Eves left Barber Motorsports Park leading the standings, with Petrov in second just four points behind the lead. The next event on the calendar is set for this weekend at the Grand Prix of St. Petersburg. Exclusive Autosport fans and supporters can catch this race live on www.roadtoindy.tv or on the Road to Indy TV App. As always, follow our social media outlets for coverage throughout the race weekend.

Driver Quote: “It was a great weekend at Barber. 1-2 in Qualifying 1 and Race 1 is an unbelievably good result for the team and I’m happy with that. Race 2 was also good, as I managed to overtake two guys on the opening lap and finished the race in third. The only thing I would like to have changed in Qualifying 2 is that I didn’t manage to put all together during one lap. I’m looking forward to St. Petersburg race week and some more podiums!”

Driver Quote: “Overall, it was really strong weekend, but it was disappointing in Race 2 knowing that without the red flag in qualifying we could have competed for a win, but that’s just Barber. I can’t wait for St. Pete because it’s my best track historically and definitely one of my favorites to drive. I have to keep pushing for more wins, as it’s a long season and I can’t let up at all!”