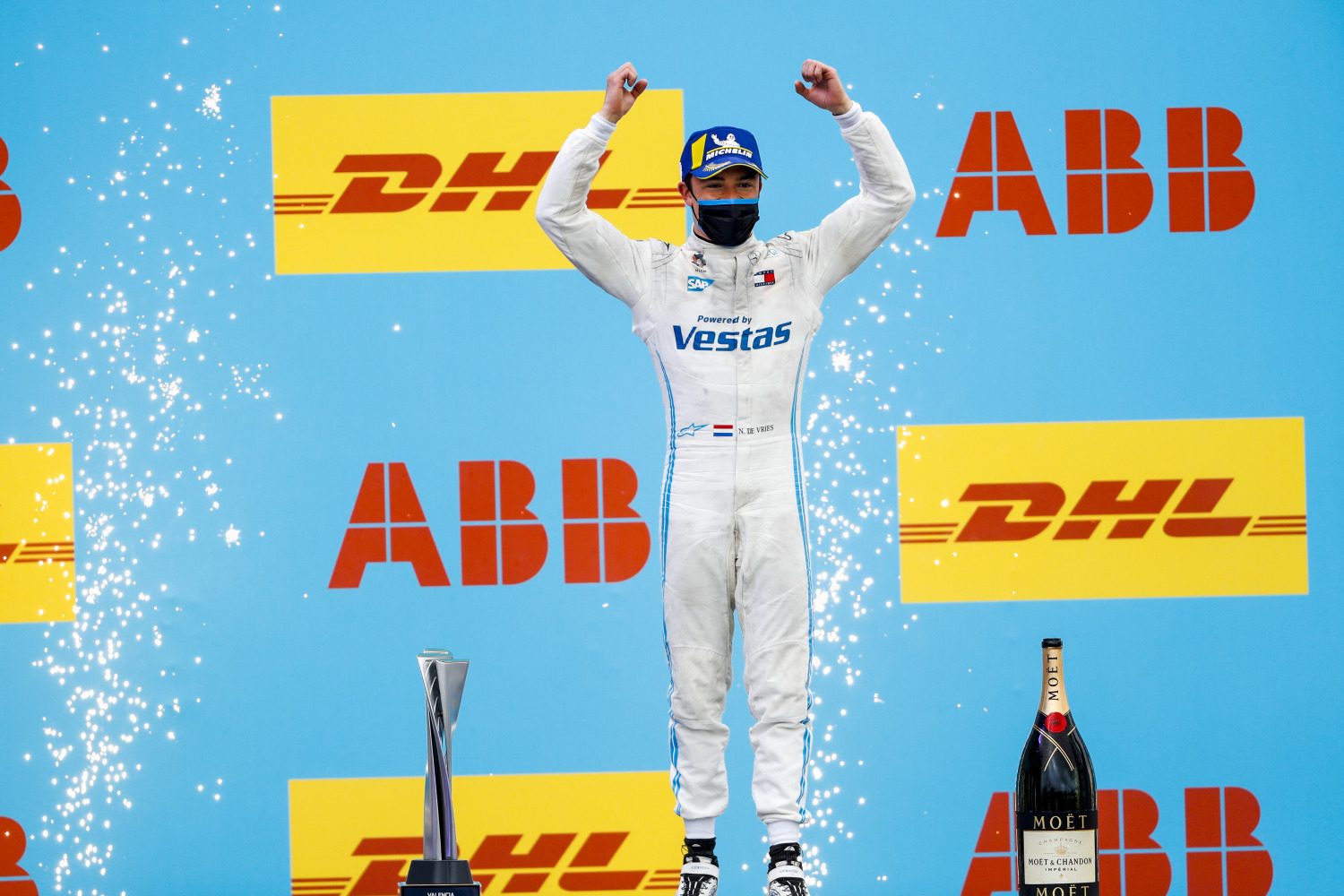 Mercedes driver Nyck de Vries scored victory in the Valencia E-Prix in which half the field ran out of electric energy and failed to cross the finish line.

This came after a safety car start and a further four safety car interruptions during a wet race meant almost every team miscalculated energy to leave only 12 cars running at the flag.

However, teams are putting the blame on the energy offset, the reduction that comes with each safety car activation, being miscalculated by the FIA.

That led to a spate of near-immediate disqualifications in the most bizarre finish to a Formula E race so far in the seven seasons of the championship.

De Vries had been happy to sit behind long-time leader Antonio Felix da Costa (DS TECHEETAH) and conserve energy for a late attack. As it happened, that attack turned into a two-lap sprint following the final spell under the Safety Car. However, only those who’d gone long as contingency, and conserved their usable energy, had enough power left in their cells to complete the extended race distance.

Dutchman de Vries drove by da Costa as the Portuguese and many around him slowed with the race running beyond its anticipated finish. Mueller and Vandoorne followed – the man stripped of Julius Baer Pole Position on a technicality and sent to the back of the grid incredibly getting his hands on silverware, making the final step on the podium.

With the rain falling and the MINI Electric Pacesetter leading the pack away, da Costa pulled a gap on Maximilian Guenther (BMW i Andretti Motorsport) and Lynn with the pack cleanly away as the race went green, for a lap or two at least.

Andre Lotterer and Sebastien Buemi had a coming-together at the hairpin – the Porsche man collecting the Nissan e.dams driver – leaving the Swiss beached in the gravel.

A lengthy spell back under the Safety Car followed for the recovery of Buemi’s Nissan, with leader da Costa leading the pack away – and able to get the jump on the rest once again to the tune of two seconds once the green flags waved.

Maximilian Guenther in the BMW was proving to be the cork in the bottle on Lap 5, with Lynn, de Vries, Norman Nato (ROKiT Venturi Racing), Oliver Rowland (Nissan e.dams) and Alexander Sims (Mahindra Racing) all within two seconds of one another. Lynn’s Mahindra suffered some front-end damage in the battle for Guenther’s second spot, and Mercedes’ de Vries was able to pass the Brit and immediately make it by Guenther, too.

Rowland and Sims weren’t hanging about, either. On Lap 6, the former passed Nato for fifth and the latter followed before Lynn sliced by Guenther’s BMW to recover a prospective podium position.

Through the first ATTACK MODE activations, it was the young German who pounced first – smart as Guenther had been slipping back down the order. He managed to hold on to fourth with Rowland just behind, and the rest of the top six followed with their initial jump through the ATTACK MODE loop a lap later.

With 25 minutes plus one lap to run, out-front it all looked calm and collected for da Costa with the Portuguese firmly in his groove. De Vries held second, three seconds back but two seconds clear of Lynn in third. Rowland, Guenther, Sims, Nato, Pascal Wehrlein (TAG Heuer Porsche), Cassidy and Edo Mortara (ROKiT Venturi Racing) rounded out the top 10.

Guenther’s race came to a sticky end on Lap 10 as the Bavarian beached his iFE.21 having slipped down the order as far as sixth after complaining of a lack of grip in tricky, slippery conditions. The BMW snapped under braking as he clipped a white line and despite an armful of opposite lock, Guenther couldn’t prevent the inevitable and ended up trapped in the gravel.

The MINI Electric Pacesetter made another appearance while the BMW was cleared and da Costa jumped early when the race went green once again – Mercedes’ de Vries all over his diffuser.

Mercedes were content to have the Dutchman remain in the DS’ slipstream, though, with energy management looking likely to come to a head towards the final minutes of the race. This would force da Costa into punching a hole in the air and use more energy in doing so, as de Vries let the Portuguese do all the hard work.

Five laps later, Sergio Sette Camara (DRAGON / PENSKE AUTOSPORT) and Mitch Evans (Jaguar Racing) clashed with the Brazilian sent off into the gravel and out of the race and the Kiwi forced to retire in the pits. A fourth spell under the Safety Car followed, while Mercedes informed de Vries he had energy in-hand to push leader da Costa with 13 minutes plus one lap to run.

The pack was once again let loose with less than 10 minutes to run, and da Costa controlled things at the restart, though de Vries had a couple of per cent of usable energy in-hand over those around him – the leader still needing to use his second dose of ATTACK MODE. Da Costa intelligently combatted this with FANBOOST used to create the gap needed to jump through the activation zone and stay ahead of de Vries.

In-behind, it was all kicking off in the battle for sixth as Nato slid into the gravel – allowing the Envision Virgin Racing pair of Frijns and Cassidy profiting. They’d eventually move into fifth and sixth, respectively, with a Lynn error spilling the Mahindra racer down to seventh.

Pascal Wehrlein, meanwhile, also found the gravel and fell out of a points-paying position and eventually into pitting and Mortara and Andre Lotterer (TAG Heuer Porsche) clashed – leaving both out of the running.

By the time the MINI Electric Pacesetter peeled off the circuit after its latest outing, the race had become a straight two-lap sprint. However, with the Safety Car so busy, and the race running to an extra lap than many had accounted for, only a handful of drivers looked like they’d enough energy to make the finish.

De Vries had worked it best, to take the race win from Mueller and Vandoorne, sending the Dutchman to the top of the standings from teammate Vandoorne and Mercedes-EQ to the summit of the Teams’ pile. Robin Frijns (Envision Virgin Racing) secured the point for TAG Heuer Fastest Lap.