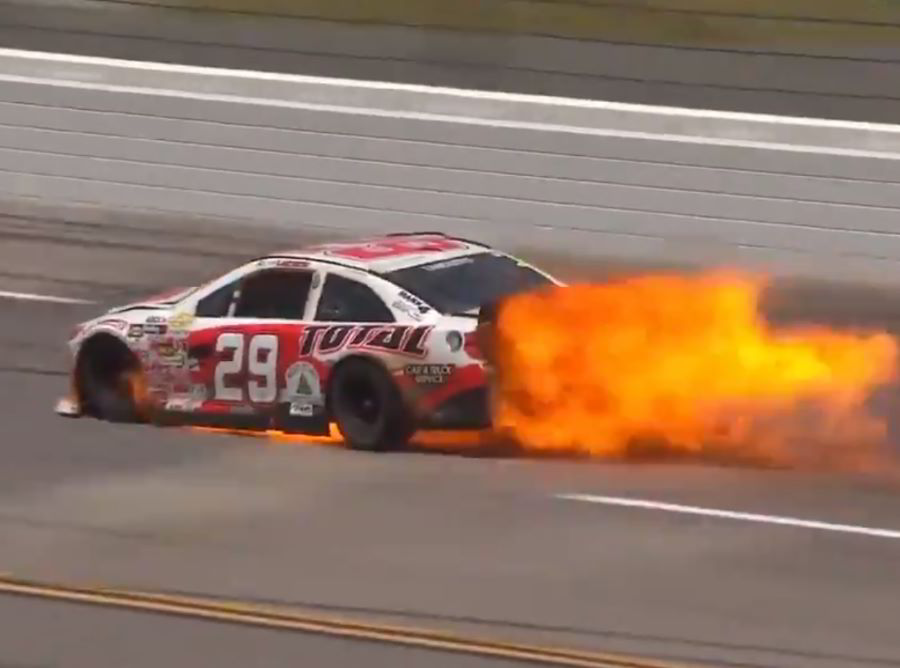 Derrick Lancaster, a 48-year-old NASCAR driver, was transported to a local hospital near Talladega Superspeedway after he was involved in a flaming wreck during Saturday’s ARCA Menards Series race.

Lancaster hit the outside wall hard in the final laps of the race after apparent contact with driver Drew Dollar. Dollar was driving on the inside of Lancaster’s No. 29 Toyota on the backstretch when Lancaster went sailing into the wall. Lancaster’s car was engulfed in flames and he exited minutes later.

A scary crash for Derrick Lancaster during the ARCA race at Talladega. pic.twitter.com/9f090hZMZL

The race broadcast on FOX showed the driver laying on the ground next to his car after he was able to exit his vehicle, and later showed him walking with support from NASCAR’s American Medical Response Safety team surrounding him.

After the red-flag for the crash was lifted, NASCAR announced that Lancaster been transported to a local hospital for further evaluation, indicating a more serious injury. A social media post issued by Lancaster’s wife, Elizabeth, that said the driver was transported to the University of Alabama Birmingham Burn Unit.

She posted a second update on Facebook later that said Lancaster will be on a ventilator for at least 48 hours until doctors are able to assess the lung damage. She wrote that her husband suffered second- and third-degree burns on both arms, his neck and face.

“Nothing internal as far as breaks or bleeding,” Elizabeth wrote. “They will debread his arms and take him to trauma unit where I’ll be able to lay eyes on him and touch him.

“He will not know I’m there but that’s ok,” she wrote. “Please continue to pray.”