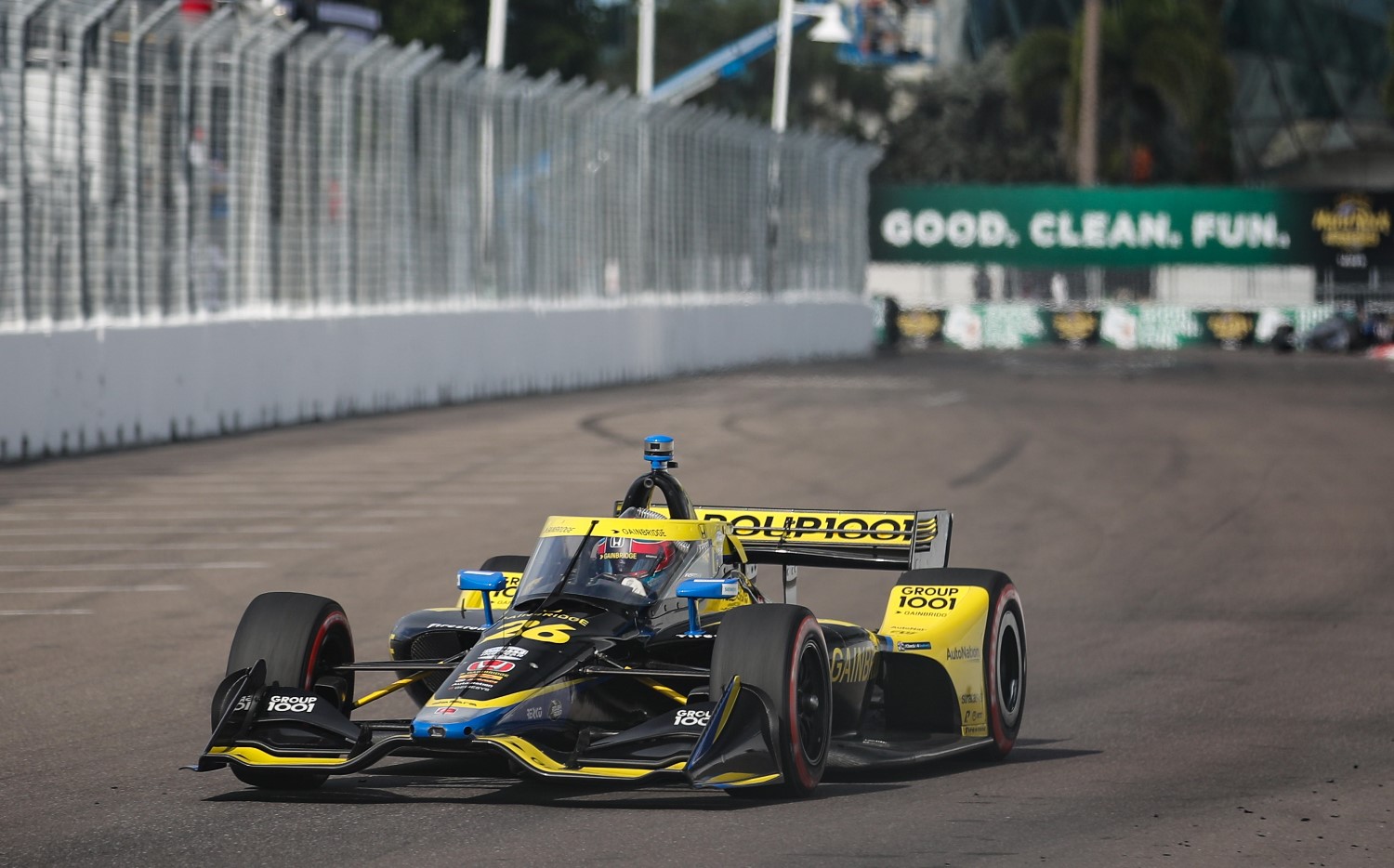 Newgarden, going for three wins in a row, did everything he could to get by Herta but the 21-year-old speedster never put a wheel wrong and led almost the entire way (he led 97 of 100 laps) from pole in the #26 Gainbridge sponsored Honda.

It was Herta’s 4th career IndyCar win, tying him with his father Bryan for career wins.

“Well, we lost a little too much ground in that second stint, really; to capitalize with the reds,” said Newgarden.

“And then we had the caution, which almost gifted us another chance. And I just didn’t want to over-extend myself today. I felt like I was close to an opportunity, but Colton (Herta, race winner) was really good. He was doing a great job on the restarts. It was tough to get tire temps. So, I pushed really hard right there in those two initial restarts. I didn’t have quite the runs I needed, so I didn’t want to risk anything. But a good day. I’m really happy with Chevy’s performance and thankful for all their work; and to have Hitachi on and get a podium is really nice here to start our year off.

“So, congrats to Colton. It was a great rebound for both of us. I feel bad about what happened last week, so I’m really happy that he got back on it today and had a very deserved victory. I wish we could have fought him a little bit more. I think we were just lacking a little bit.”

“We really had a shot on restarts, but it was too slippery on the inside to go for it,” said Pagenaud on the restarts.  “I noticed it when I tried to pass Jack (Harvey). But really when I lost the race was at the beginning of the first stint but overall, I think it was a great performance by the No. 22 Chevy Australian Gold team. That was a great performance. I think on street courses we could be very strong. I can’t wait for the oval, especially Indy and Texas.”

Scott Dixon rounded out the top-5 in his #9 Ganassi Honda.

First Takuma Sato gave James Hinchcliffe when they bumped, and later Graham Rahal and Alexander Rossi were fighting over the same piece of asphalt with Rossi coming out the loser with a flat right front.

“What a great job by everybody,” Herta said. “Sorry, I can barely talk; I’m so winded. I’m so happy we did this, so happy to rebound from Barber and get the momentum going for the season that we need, which is a championship season.”

The strong finishes for Herta and Newgarden erased memories of a rugged season opener for both last Sunday at Barber Motorsports Park. Herta finished 22nd and Newgarden 23rd in the Honda Indy Grand Prix of Alabama presented by AmFirst after Newgarden spun on the first lap and collected multiple cars, including Herta’s machine.

Barber race winner Alex Palou finished 17th today in the No. 10 NTT DATA Chip Ganassi Racing Honda but kept the championship lead, 67-65, over the tied second-place duo of Dixon and Will Power. 2014 series champion Power rallied from a 20th starting spot to finish eighth in the No. 12 Verizon 5G Team Penske Chevrolet.

It appeared tire strategy would be moot three laps after those final stops, as Herta was on cruise control and led Newgarden by 9.4390 seconds on Lap 70. But rookie Jimmie Johnson spun and clipped the inside wall in Turn 3 with his No. 48 Carvana Chip Ganassi Racing Honda on Lap 73, triggering the second full-course caution and evaporating Herta’s big lead.

On the ensuing restart on Lap 76, Newgarden and his grippier alternate tires made a run at Herta but couldn’t get close enough to pass. But then the No. 18 SealMaster Honda of Ed Jones and the No. 29 Genesys Honda of James Hinchcliffe made contact in Turn 4 on Lap 79, triggering the final full-course caution on Lap 80.

Two-time defending St. Petersburg race winner Newgarden got another chance to make a run at Herta on the restart on Lap 83, but Herta held him off. Newgarden stayed close to Herta in a gripping, all-American duel for the next 10 laps, but Herta kept his California cool and pulled away gradually for victory over Tennessee titan Newgarden.

“He’s so good around here,” Herta said of Newgarden. “I was nervous because he was on those new red tires. I thought they were going to be better. But they ended up being similar (to the primary tires), so I was able to hold him off.”

Said Newgarden: “We lost a little too much ground on that second stint to capitalize on the reds. Then we had the caution, which almost gifted us another chance. I just didn’t want to overextend myself today. I felt like I had close to an opportunity, but Colton was really good. He was doing a great job on the restarts.

“Congrats to Colton. It’s a great rebound for both of us. I felt bad about what happened last week, so really happy he got back on it today and had a very deserved victory. I wish we could have fought him a bit more. We were just lacking a little bit.”

It was the fourth career victory for Herta, 21, in his third season in the NTT INDYCAR SERIES. He matched the INDYCAR SERIES win total of his father, Bryan Herta, who competed from 1994-2006 and now calls race strategy for his son for Andretti Autosport.

One thought on “IndyCar: Herta holds off Newgarden to win St. Petersburg GP”