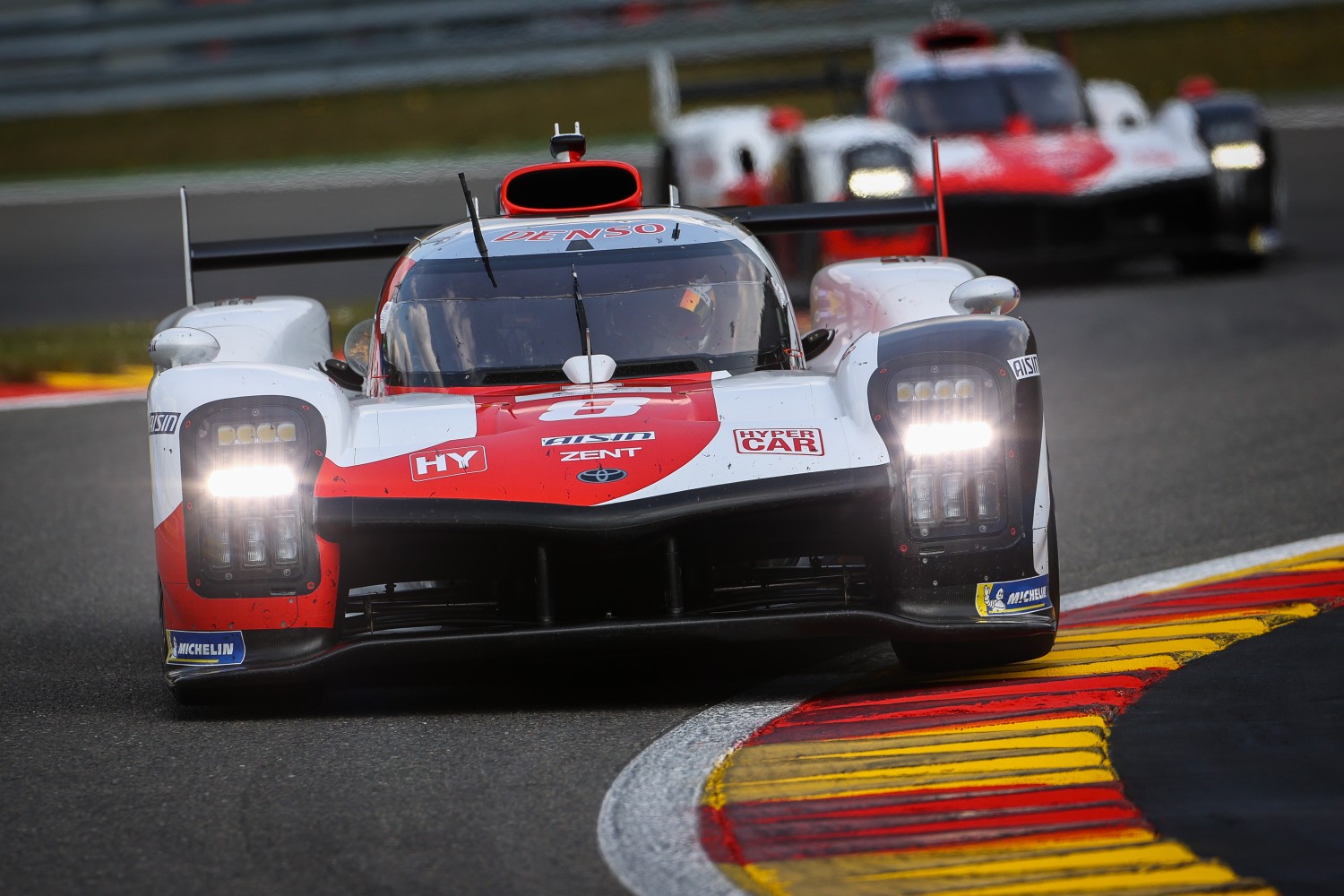 TOYOTA GAZOO Racing began the Hypercar era in the FIA World Endurance Championship (WEC) with a landmark victory in the Total 6 Hours of Spa-Francorchamps following an exciting start to the 2021 season in Belgium.

Sébastien Buemi, Kazuki Nakajima and Brendon Hartley earned a place in the record books by winning in the #8 GR010 HYBRID after a dramatic and tense battle at the front, overcoming a close challenge from the #36 Alpine in second and their own team-mates in the #7 car.

In an incident-packed race, the Hypercars fought relentless from the off. World Champions Mike Conway, Kamui Kobayashi and José María López started from pole position in their #7 GR010 HYBRID and had challenged for victory but finished third following several setbacks.

Today’s result marks TOYOTA GAZOO Racing’s fifth consecutive win in Belgium as it begins its challenge for a hat-trick of World Championships.

When the green flags waved to begin WEC’s new era, Mike led the 31-car field, with Sébastien closely behind over the opening laps. The #8 took the lead on lap 11 and the pair of GR010 HYBRIDs were hotly pursued by the #36 Alpine.

As the first pit stops approached, the race took its first dramatic turn. Mike brought the #7 into the pits and lost time when the car did not leave cleanly, before Sébastien visited the pits a lap later.

At the end of that stop, the fuel nozzle was removed from the #8 before the 35secs minimum refueling time had elapsed, breaking a new regulation and resulting in a 30-second penalty, taken at the car’s next pit stop, when Brendon took the wheel.

With the #7 requiring a fluid refill when Mike handed over to José, the #36 Alpine took over at the front. At half distance, José was closing in and just a few seconds behind, with Brendon further back in the third-placed #8.

The exciting Hypercar battle showed no sign of easing off, and neither did the drama. Jose made contact with a GT car, slightly damaging the front bodywork. Then with just under two hours remaining, the #7 slid off track and became stuck in the gravel, requiring a rescue vehicle to recover it before he resumed in third.

That left Kazuki in the #8 hunting down the #36 Alpine for the lead, while Kamui suffered a further setback when the #7 was given a drive-through penalty for the earlier contact with a GT car.

Following the final Hypercar fuel stops, Sébastien in the leading #8 had a modest cushion of around a minute over the Alpine and he brought the car safely to the checkered flag to win by 1min 7.196secs from the #36, with Kamui bringing the #7 home one lap behind

Battle will resume for Hypercar honors in Portugal next month, when the inaugural 8 Hours of Portimao takes place on 13 June.

The reigning champions gave a notice of intent by topping all of the practice and qualifying sessions ahead of the race, before Hanson and Albuquerque built a solid lead in order for WEC rookie to consolidate the gap and take a debut victory. 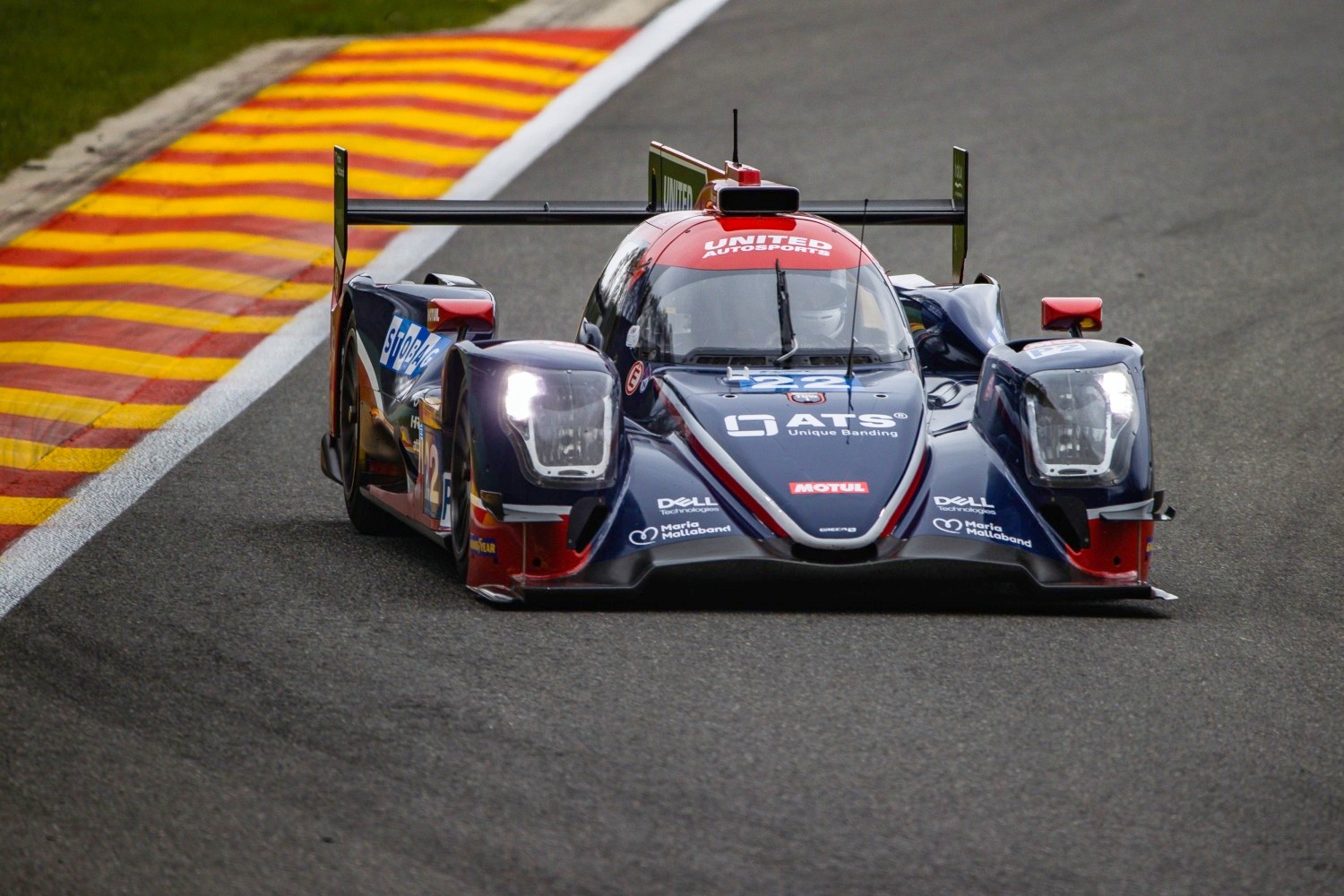 JOTA took an accomplished second and third in class after both of its cars stealthily climbed up the order.  The No.28 trio of Sean Gelael, Tom Blomqvist and Stoffel Vandoorne looked set for an excellent runner-up position but were forced to take a late race penalty for contact with the Alpine Hypercar.

This allowed the No.38 Jota Oreca-Gibson of Roberto Gonzalez, Antonio Felix da Costa and Anthony Davidson through to grab second in the final moments of the race.

Local favorites Team WRT were engaged in the podium fight on their WEC debut but were forced in to a long pit-stop after a clutch issue in the fourth hour.

In the LMGTE Pro category it was Kevin Estre and Neel Jani that dominated with a lights-to-flag victory in the No. 92 Porsche 911 – RSR. It marks the Porsche GT Team’s second consecutive win at Spa and Estre’s fifth WEC victory.

Meanwhile, WEC returnee Jani made a dream comeback taking his fifth win in the series – the Swiss driver’s first since Le Mans in 2016. 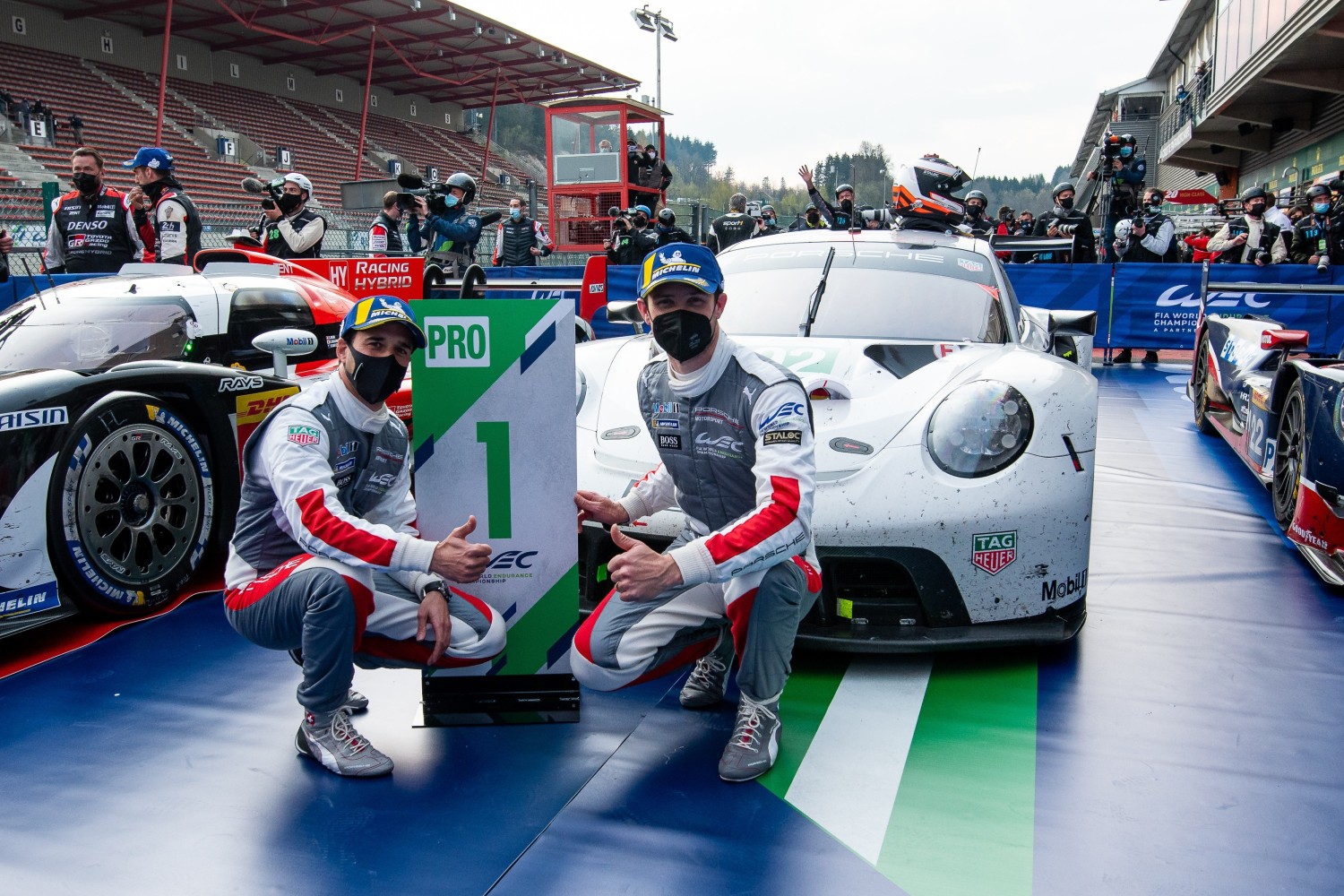 The No. 51 AF Corse Ferrari 488 GTE Evo driven by Alessandro Pier Guidi and James Calado finished second, 35 seconds adrift of the category-winning Porsche. The sister No. 52 Ferrari which was driven by Miguel Molina and Daniel Serra claimed the final podium spot.

Britain’s Oliver Gavin signed off an incredible 30-year racing career with a fourth place finish – the legendary sportscar driver and team-mate Antonio Garcia putting in a solid effort with the Chevrolet Corvette C8.R on its debut on European soil.

In the race’s closing hour, the No. 91 Porsche 911 RSR – 19 which was driven by Gimmi Bruni and Richard Lietz lost time after it made impact with the No. 7 Toyota, incurring a puncture. The team were also penalized with a track limits drive-through penalty. They eventually finished fifth, 20 seconds adrift of the Corvette.

Corvette Racing’s Antonio Garcia and Oliver Gavin finished fourth in GTE Pro at the Six Hours of Spa on Saturday with their No. 63 Mobil 1/SiriusXM Chevrolet Corvette C8.R – the opening round of the FIA World Endurance Championship.

The first appearance at Spa by Corvette Racing was significant for two reasons: it marked the first race outside the United States for the mid-engine racing Corvette, and it also marked Gavin’s final start with the team after 20 years.

The main target for the Spa event was to gain knowledge and experience with the C8.R in the FIA WEC ahead of August’s 24 Hours of Le Mans. Corvette Racing will send two of the mid-engine racers back to Le Mans after missing last year’s event due to the COVID-19 pandemic.

Garcia qualified fifth but the race pace of the Corvette was encouraging in a fight among three manufacturers. He drove the first two stints on the same set of Michelin tires – a different strategy than the other GTE Pro entries – in an effort to be in better shape to fight at the end.

Gavin drove the middle two stints of the race, including the race’s first full-course caution. It marked the 204th appearance in a Corvette Racing entry for the veteran, who ended his career with 51 victories – including five at Le Mans – and five IMSA championships. Gavin moved up to fourth in class during his stint as one of the Porsches suffered a punctured tire.

The LMGTE Am category was never short of drama but it was the No. 83 AF Corse Ferrari 488 GTE Evo driven by Francois Perrodo, Nicklas Nielsen and newcomer Alessio Rovera who eventually crossed the finish line first.

The reigning category champions finished 44 seconds clear of the No. 33 TF Sport Aston Martin Vantage shared by Ben Keating, Dylan Pereira and Felipe Fraga. Completing the podium was Italian outfit Cetilar Racing, the Ferrari benefiting from a Full Course Yellow to climb up to third despite contact with the No. 1 Richard Mille LMP2 car earlier in the race. 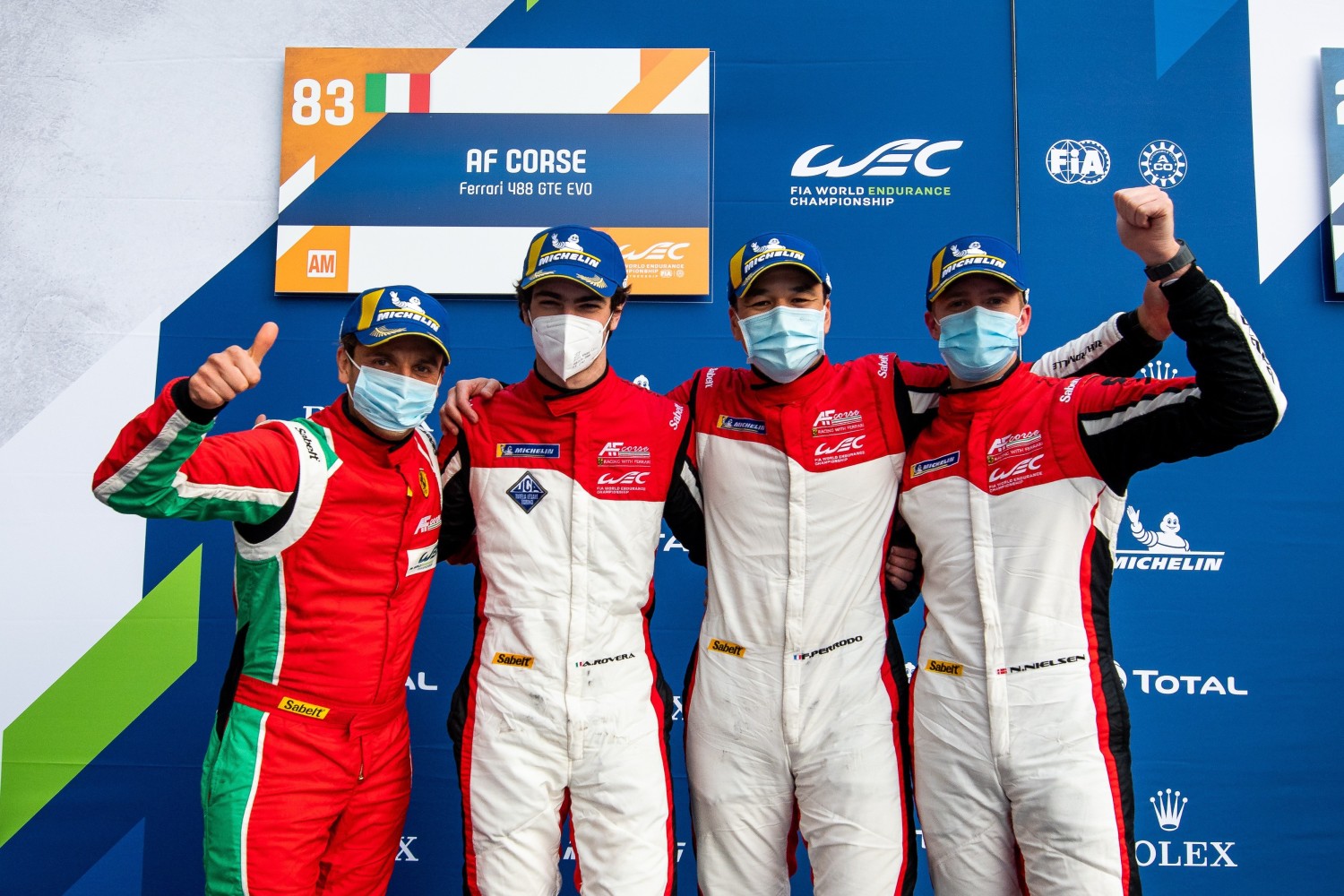 The No. 88 Dempsey-Proton looked set to complete the podium to ensure three different manufacturers in top three positions but a late penalty dropped the Porsche 911 RSR – 19 out of contention, with the trio eventually finishing fifth. Fourth place went to the No. 54 AF Corse Ferrari.

Neither the No. 46 nor the No. 56 Team Project 1 cars started today’s race. Egidio Perfetti hit the barrier at Raidillon during yesterday’s qualifying, the damage of the shell structure on the rear left of his Porsche 911 RSR – 19 unable to be repaired in time.

Also unable to start today’s race was the GR Racing Porsche 911 RSR – 19 after Michael Wainwright crashed during the outlap, incurring damage to the No. 86 car only 10 minutes before the green flag was dropped.