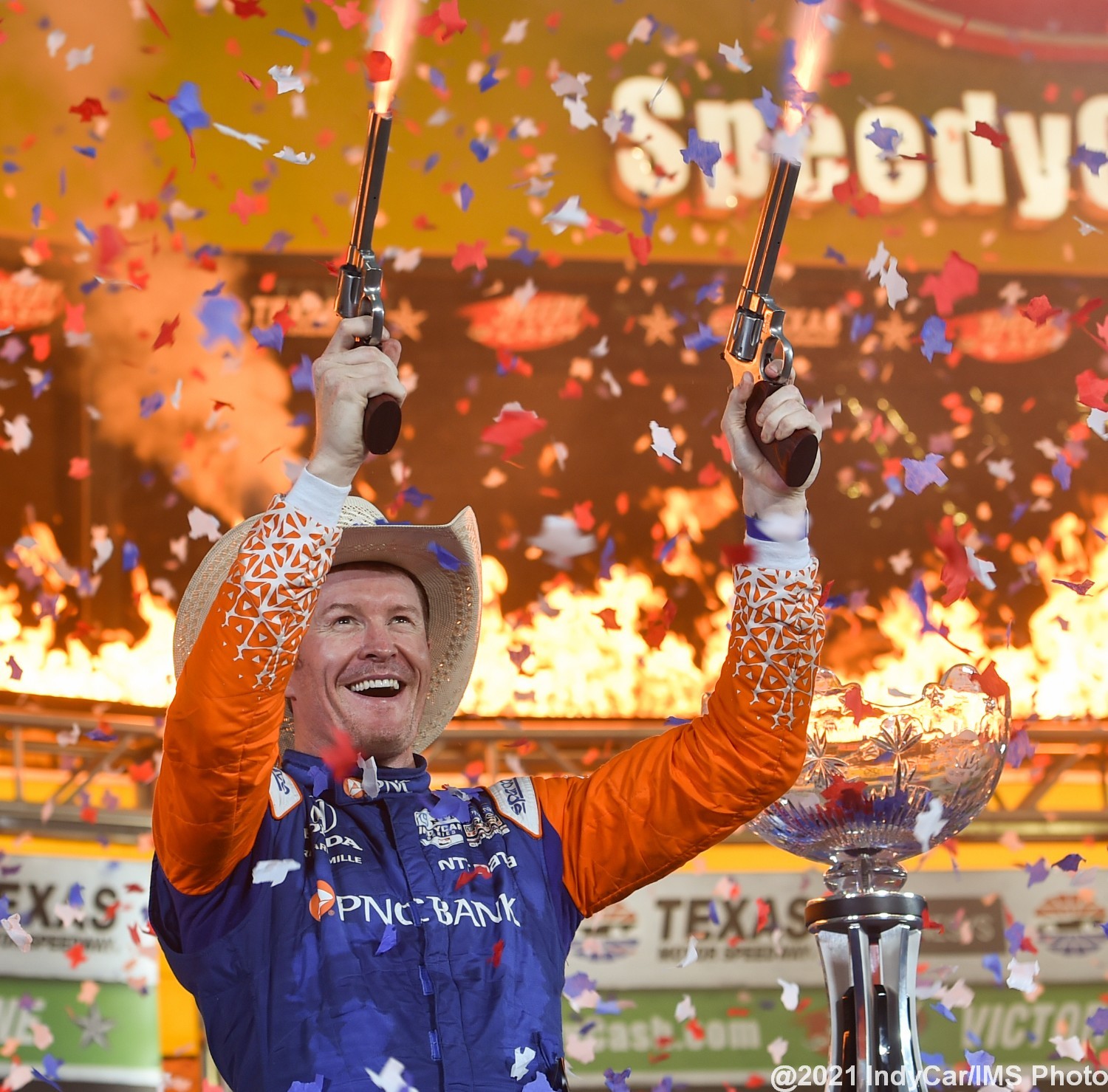 The single-file Texas track turned the race into one of the worse demonstrations of an IndyCar snoozefest in years with almost zero passes for position on track as the drivers did not dare move out of the single-groove high-banked oval. It is really no surprise so few fans attended because Texas used to be exciting IndyCar events but with the current IndyCar aero package they have become boring parades.

Penske Chevy rookie Scott McLaughlin pushed Dixon at the end but never really had a chance to pass the veteran who is now just two wins away from passing Mario Andretti for the 2nd most career IndyCar wins.

“It was a bit of a crazy night for us,” Dixon said. “Definitely very tense there at the end. It was kind of cool to be racing a countryman for the last few laps. Fifth win at Texas, baby! That was awesome.”

It was Dixon’s 51st career win and 5th at this track.  He won this race last year for back-to-back wins and now has won a race in a record 19 straight seasons.

“It feels amazing to be in this position,” Dixon said. “You just never want it to end. We want to go back-to-back and try to tie Mario tomorrow. I’m sure that’s not exactly what he wants to see. We’ll keep our heads down. It’s extremely tough. This season has been one of the toughest starts, I think, for a lot of us just with how tight the competition is.”

McLaughlin did not lead a single lap.

Pato O’Ward was 3rd for Arrow McLaren SP.  O’Ward did not lead a single lap.

Alex Palou, Dixon’s Ganassi teammate led the first 6 laps from pole and finished 4th.  No driver other than a Ganassi Honda driver led a lap. The Ganassi team has the secret setup for Texas and the other drivers have little to no chance of beating them.

Graham Rahal rounded out the top-5 in his Rahal Letterman Lanigan Honda.

Dixon, who started second, held a comfortable lead of three to five seconds at various points during the race, which went the distance despite rain in the Dallas-Fort Worth area. But McLaughlin applied plenty of pressure over the last stint of the race after the final pit stops for most of the field under caution on Lap 165.

Three-time Australian V8 Supercars champion McLaughlin showed the composure and tactical sense of an oval racing veteran in his first race of only left turns, staying within about half a second of Dixon during the closing laps.

Dixon approached lap traffic with two laps to go, with the turbulent air from those cars slowing his charge toward the checkered. But he held off McLaughlin long enough for victory, averaging 173.036 mph.

“I have this thing on the dash that tells me the gaps to cars,” said Dixon, 40. “I probably need to take it off because it was stressing me out more than anything. I kept looking down, looking in the mirror. He was fast.”

Said McLaughlin, 27: “I’ve never been this bloody happy to finish second in my life. I’m really stoked. I just couldn’t get Scotty (Dixon) there at the end. But I’ll tell you what: It was bloody cool battling with my all-time favorite hero, Scotty Dixon. Two Kiwis, one and two. My Mom and Dad are watching at home (in New Zealand), for sure.”

Other notables – Harvey ran strong as the team opted to stay out longer going into the second pit stop in hopes of gaining additional positions. Unfortunately, the No. 60 fell to eighth following the second stop, but Harvey put his head down and moved back up to seventh just a few laps later.

The final stop saw the MSR crew make a lightning quick stop which put Harvey two positions ahead once returning to track. The final 25 laps were a dash to the finish which, in the end, saw Harvey cross the line seventh. The top ten result puts Harvey fifth in the championship standings which is also where he will start Sunday’s XPEL 375.

The biggest accident came when Sebastien Bourdais was forced to check-up for a slow Colton Herta who was trying to pit and was hit from behind by Josef Newgarden and crashed hard into the outside wall in the #14 AJ Foyt Chevy.

For Bourdais, it was a fortunate turn of events as he was not happy with the No. 14 ROKiT Chevrolet after practice—the only one of the weekend. In the race, both drivers got off to a solid start with Bourdais maintaining his seventh place until it was time for his first pit top..

On lap 55, strategist Larry Foyt called Bourdais to the pits. Bourdais ran low into Turn 1 only to find Colton Herta running slower than normal. Bourdais checked up but unfortunately for Bourdais, Josef Newgarden did not slow enough and he hit Bourdais squarely in the rear in Turn 2. The impact sent Bourdais into a hard left and then the car shot up the banking and it hit the outer retaining wall hard with the back end, eventually coming to rest in the middle of the track. Bourdais was not injured in the accident.

“Tough break for the No. 14 ROKiT Chevrolet,” said Bourdais, visibly disappointed. “Not entirely sure how we got there, but we really struggled with a tough car to drive in testing here and then in practice here this afternoon. When the race started, we actually were pretty racy and competitive, and it looked like we had something to play for. Then I got run into just before the first pit stop and got wrecked. It’s a real shame, but we’ll try to come back stronger tomorrow.”

The other accident was James Hinchcliffe who got pushed up high into the PJ1 NASCAR traction compound and spun helplessly into the Turn 2 wall on lap 160.

SCOTT MCLAUGHLIN, NO. 3 PPG TEAM PENSKE – FINISHED 2ND
HOW PROUD OF SECOND PLACE ARE YOU TODAY?
“I’ve never been this bloody happy with second. I’m really stoked. Everyone at PPG and Chevy, thank you. I just didn’t have enough for Scott (Dixon) at the end. It was bloody cool battling with one of my all-time heroes. Two Kiwis 1 and 2, fantastic.”

DID YOU HAVE TO SNAP OUT OF IT WHEN YOU WERE CHASING THE OTHER SCOTT?
“I’m just so proud. I’ve worked really hard behind the scenes to make it feel good, and we got some good strategy there from my team. They put me in a position; I’m just happy to bring it home for them.”

COUPLE OF THINGS IN THE BACK OF YOUR MIND YOU MIGHT HAVE TRIED DIFFERENTLY AGAINST DIXON?
“I was trying really hard but it’s so hard in dirty air. I was hoping there would be some traffic toward the end and I could have a run. I was really good through (Turns) 3 and 4, but I just couldn’t get through 1 and 2. P2 is good and we’ll get a win one day.

“So many thanks! That guy in front of me, Scott Dixon, is a legend in this sport and a fellow countryman. It was very special for me and for New Zealand. Very proud of everyone at Team Penske, PPG and Chevy for giving me a very good engine. I couldn’t quite get there at the end but I’ve never been this happy with a second place. The testing really paid off. Just getting familiar and getting a feeling for everything. My engineers got me to the point where I am comfortable. I’m really proud of everyone on this PPG Chevy. We had a really great strategy. I can hardly wait until tomorrow!”

PATO O’WARD, NO. 5 ARROW MCLAREN SP – FINISHED 3RD
YOUR STRATEGIST MADE THE CALL TO SHORT-PIT EARLY ON. IS THAT WHAT GOT YOU ON THE PODIUM?
“That was the call. I knew we had such a fast car, especially by ourselves. And I knew if we could get in clean air we could really make up some track position. In the beginning, we were just really stuck in a train. It’s very tough to pass. But what a great race car. We’re ready for tomorrow. I want to thank Arrow Electronics, Vuse, Team Chevy and the Arrow McLaren SP No. 5 guys. This is a very good step in the right direction. There are a couple more positions we want to get, but this should really put us tomorrow in a better starting position than what we started today.”
A STEP IN THE RIGHT DIRECTION IN TERMS OF OVALS OR OVERALL?
“In terms of ovals and overall. We bounced back after a pretty tough weekend in St. Pete, so we want to come back tomorrow and try to do better and roll into the Month of May for the Indy road course and the crown jewel of the schedule.”

WHAT WILL YOU THINK ABOUT FOR TOMORROW? WERE THE VIBRATIONS A CONCERN FOR YOU AT ALL?
“It was at the end. I didn’t quite have anything for McLaughlin and Dixon. They were very quick. I didn’t want to risk anything. I started getting a little wiggly and were getting some temperature issues for I just said let’s take this and we’ll come back tomorrow and see what we got.

“This Arrow McLaren SP group made my life so much easier with that off strategy call. It really paid off for us. The car changed quite a bit during the race. Towards the end we had some issues with temps so we didn’t have quite enough for both Scotts there at the end. These guys did a great job of getting us up there. Chevy worked hard. We should have a way better starting place tomorrow which will be good. We have a fast car.”

Ed Jones:
“We had a really tough time in practice this morning, however the SealMaster crew made some great changes for the race, and we ended up with a great race car! We took it step-by-step in the race, made some great passes. We made our way forward. I lost a few spots, I’m not sure how. On the last restart I tried to make as much time as I could and made up a few spots. It was a fun race. A decent result considering where we started and hopefully we can have a better one tomorrow.

Jack Harvey
“I thought today went really well, at times we looked really good and at others I think we had some things to work through,” said Harvey. “We had a small issue with the shift lights in the car, so restarts were a bit tricky. The No. 60 AutoNation / SiriusXM Honda is pretty quick around here. The biggest thing for us is the level of improvement compared to a year ago, it’s just massive. I’m so grateful for Meyer Shank Racing and the effort they put in and now we’ll just try to do better tomorrow.”