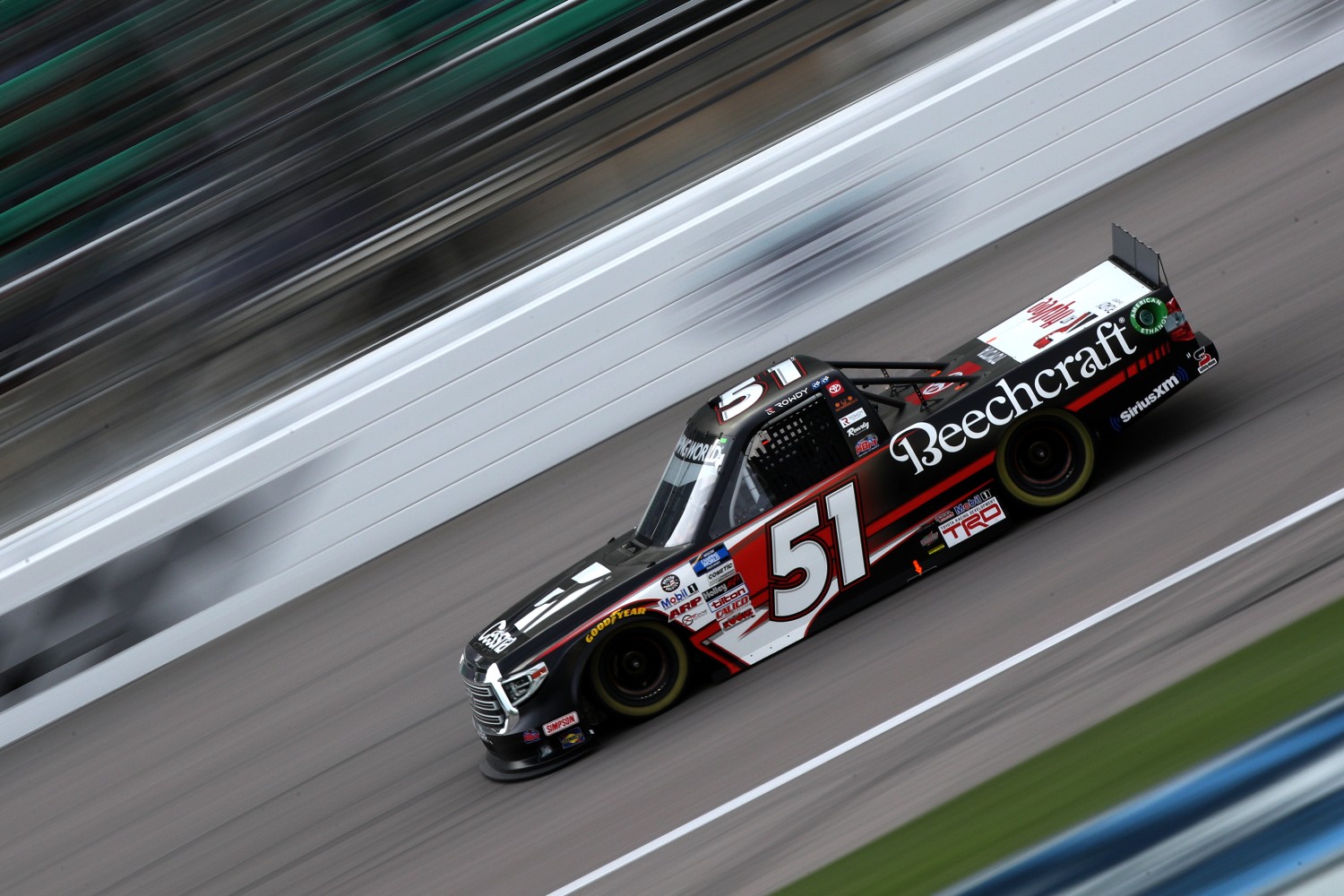 But the veteran had to earn that joyous finish – rallying from a fourth-place starting position on the final overtime restart to take the lead in a three-wide battle. He ultimately led the final two laps to take the checkered by .665-seconds over Ross Chastain. It marked the second win of the season for Busch. He’s either won or finished runner-up in his four Truck Series races this season.

Despite the dominance of Busch’s No. 51 Kyle Busch Motorsports Toyota, he was on the radio with his team during the race’s final caution, worried there may have been some sort technical problem with his truck. But at the drop of the green, he maneuvered around the front-running trucks of Chastain and Austin Hill, pulling away on the final lap.

Busch’s win marks the fifth straight this season for his Kyle Busch Motorsports. His 59 laps out front was most on the night. It’s Busch’s third victory in his last four Kansas starts.

“No restarts actually went our way tonight, I was shocked, we definitely missed something just being able to come up through the gears and get going,” said the Las Vegas native who turns 37 Sunday.

“It just would not go. Those guys would just swarm us. I think we saw it one of the restarts with the 4-truck (Nemechek) too, he got run over. So all and all, great job by KBM and Toyota, TRD, this Cessna Beechcraft Tundra was awesome.”

Series rookie Hailie Deegan finished a career best 13th and was running as high as eighth place, before pitting just before the final restart.

As with Busch, at one point Hill was worried about his truck’s performance – pitting twice during the first stage break but steadily making his way back up through the field. Last year’s regular season champion, Hill hasn’t won since September, 2020 and the 1.5-mile Kansas Speedway is statistically, his best track.

“I thought I did everything right on that restart, threw it on the apron and saw Chastain go up to block whoever was coming on his outside and got beside him and from there on out it was a drag race, I was wide open the whole green-white-checkered,” Hill said, adding, “Good finish, finishing third with everything we had going on. I want to win so bad, so just really frustrating right now.”

With his fifth-place finish Nemechek – a two-race winner in 2021 – maintains a 33-point lead over fellow two-race winner Ben Rhodes in the championship standings. And that was good enough to earn Nemechek’s No. 4 Kyle Busch Motorsports team a $50,000 mid-season “road crew” bonus from series sponsor Camping World.

The series next race, the LiftKits4Less.com 200 at Darlington (S.C.) Raceway is Friday night at 7:30 p.m. (FS1, MRN, SiriusXM NASCAR Radio). By Holly Cain

How difficult was the final restart with the issues you were feeling in the truck?

“No restarts actually went our way tonight. I was shocked. We definitely missed something, just being able to come up through the gears and get going. It would not go. It’s just slow. Those guys would just swarm us. I think we saw it on one of the restarts with the 4 (John Hunter Nemechek) truck too, he got run over. All in all though great job by KBM (Kyle Busch Motorsports), everybody at Toyota and TRD (Toyota Racing Development), this Cessna Beechcraft Tundra was awesome tonight. It’s so cool to win here in front of Cessna’s hometown. I’m sure there’s some Cessna folks up in the grandstands tonight cheering us on. We’re appreciative of them and Rowdy Energy and everybody that helps us get here. Incredible Bank, I know they’re here on the backstretch tonight. Brexton races tomorrow, so he better bring home a win like I brought home a win. Hopefully he can do it, hopefully we can do it. I just want to say hi to my family back home.”

Can you take us through the final restart for the win?

“All the restarts were hectic for us. Any time we started on the front row, we would always go backwards. It just would not fire on the restarts for whatever reason. We definitely had a really good, strong long run truck. The guys at KBM (Kyle Busch Motorsports), Toyota, TRD (Toyota Racing Development) – this Cessna Beechcraft Tundra was awesome on the long runs. Those restarts were just not for us. We made it work on that last one. The last one, I was fourth in line – got a little bit of a bump from Todd (Gilliland) and got three-wide. I don’t know what else happened after that, but it was just trying to go where they weren’t by that point and get ourselves back up front. I knew when that caution came out, it was definitely not going to be easy. I hated that we saw that caution, but put on a heck of a show for all the fans.”

How much did the track change during this race?

“It changed a ton, oh my gosh. The ARCA rubber that was down early on and us burning that off and then rubbering in the top and then how the whole groove and the whole race track kind of changed. It felt like there was some slick spots out there and some grippy spots out there. Hopefully I can use that to my advantage for tomorrow and figure out how to run good and how to get a good finish here tomorrow and looking forward to my M&M’s Camry.”

What kind of a statement is this for another victory for Kyle Busch Motorsports?

“I saw the 4 (John Hunter Nemechek) truck on my inside on the restart in one and two and I was like, ‘damn, he’s already here.’ I thought he was going to come with us right there at the finish, but I don’t know what happened to those guys. Overall, just a real strong year for us so far at KBM. This is a pleasure year so far. It’s cool to have John Hunter, we really lean on each other a lot. We’re trying to get Chandler (Smith) up there a little more and get him going a little bit better. The restarts for all of our trucks tonight certainly weren’t going to help him out. We’ve got some work to do. We’re still not the best.”