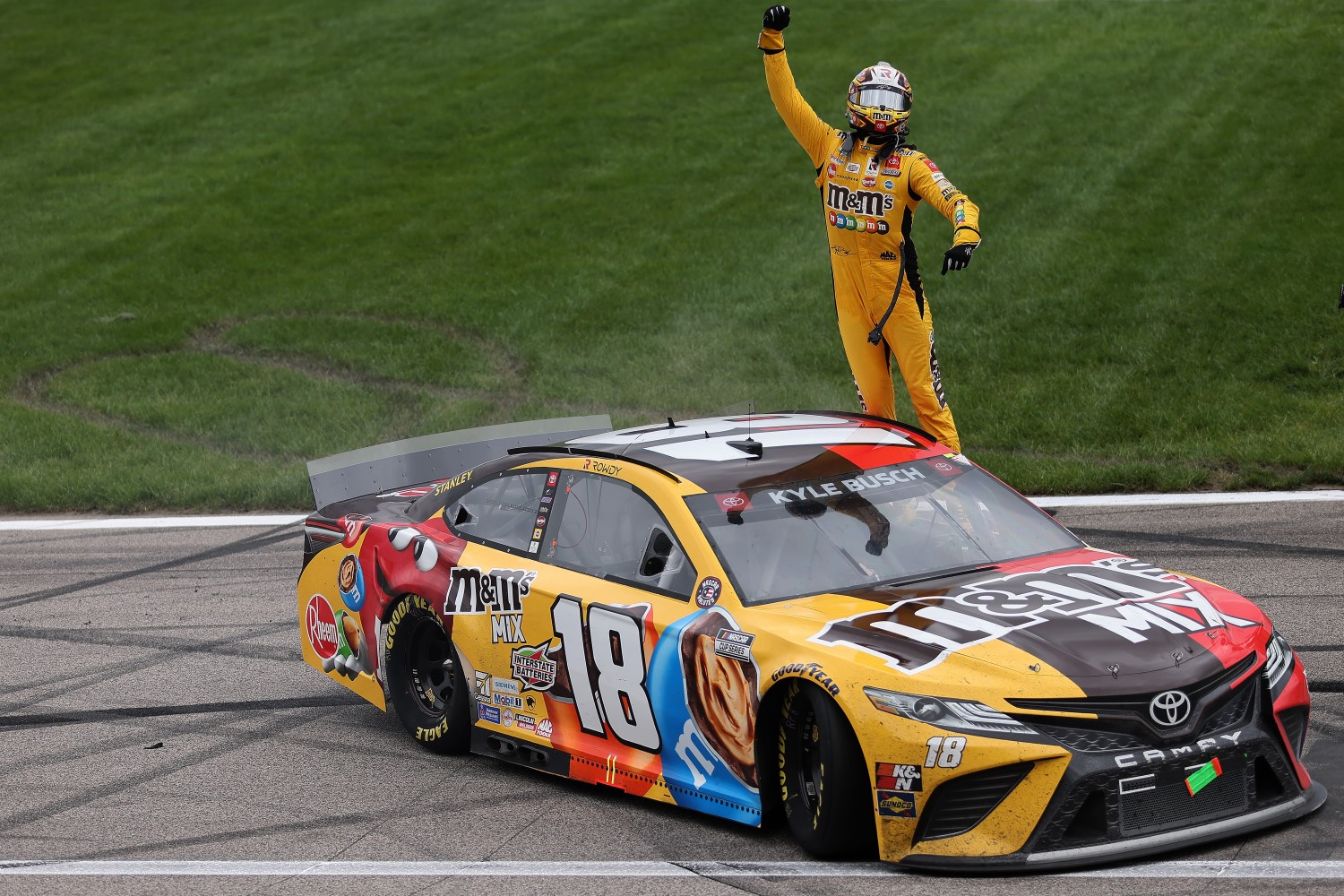 After winning the Truck race Saturday in style, Kyle Busch emerged from a late flurry of caution periods Sunday at Kansas Speedway, powering to his first victory of the season in the NASCAR Cup Series on his 36th birthday.

Perhaps it was birthday fate. When the name of the race is the Buschy McBusch Race 400, your name is Kyle Busch and it’s your 36th birthday – you have to figure there’s some serious racing juju in your favor. And Busch took advantage of it.

Busch’s No. 18 Joe Gibbs Racing Toyota took the lead on a restart with two laps remaining and held off the field by 0.336-seconds Sunday at Kansas Speedway to give him his first NASCAR Cup Series win of the season – 58th of his career – and his new crew chief Ben Beshore the first win of his career.

“Just a great day to be able to put this M&Ms Camry up front,” Busch said smiling, adding “Great to be able to get everyone back in Victory Lane again this early in the season and get those points going our way.

“And,” he said breaking into a grin, “I just remembered it’s the Buschy McBusch race and a Busch won. What do you know?”

It was a dramatic ending to what had been largely a Kyle Larson show up front all day. The Hendrick Motorsports driver led a race best 132 of the 267 laps. But he got shuffled back to the second row on the last restart and had contact with Ryan Blaney’s front-row running Ford after taking the final green flag. The two cars slid up and bounced into the wall and out of the groove, allowing Busch to take off with the help of his Joe Gibbs Racing teammate Martin Truex Jr. pushing from behind.

Ultimately the Fords driven by Kevin Harvick and Brad Keselowski – on fresher tires – chased down Truex on the last lap to claim second and third place behind Busch. Keselowski, last week’s Talladega winner, led a season-best 72 of the opening 80 laps.

Larson, looking to claim his second victory of the season was understandably disappointed after the race. He finished 19th after leading the most laps on the afternoon.

“I had the 2 [Keselowski] behind me and he didn’t get to my bumper and I think he had to protect behind him and it just allowed the bottom [row] to get a good jump on us and the bottom two lanes cleared me,” Larson explained.

“I was back to third and planned on pushing [Ryan] Blaney as good as I could and obviously, I pushed too hard and got him loose and chased both of us back into the wall. I was just trying to help him stay side by side with the 18 [Busch] on the back to allow myself to have some sort of opportunity, but I just pushed too hard.

“That’s really the first time I was behind somebody on a restart. I learned for next time.”

The first 167 laps of the 267-lap race were run with no major incidents – the caution flags came out only for a scheduled competition caution and the two stage breaks. Busch won Stage 1 and Larson won Stage 2.

But there were three cautions in the last 20 laps – making pit decisions and lane choice crucial in that last run to the checkered flag.

Ultimately, the two-time series champion Busch, was able to keep his car up front and make the move when he needed to – his victory obviously a huge boost in confidence for the team, which had only two previous top-five finishes in the opening 10 races of the season.

The NASCAR Cup Series races next Sunday at the historic Darlington (S.C.) Raceway in the Goodyear 400 (3:30 p.m. ET on FS1, MRN and SiriusXM NASCAR Radio).

What does it mean to get back to victory lane with the ups and downs you’ve faced both personally and professionally in recent months?

“You talk about ups and downs of racing – there’s been a lot of downs of life for us. I have a great opportunity and a great job, no doubt. But struggling with the infertility and stuff like that with Samantha (Busch, wife). Hey to Samantha and Brexton (son) back home. Hopefully he won, I don’t know what the results are from Brexton’s race today. Just a great day to be able to put this M&M’s Mix Camry up front. Want to thank Hy-Vee, our retail partner. They did a huge promotion for us this year with M&M’s and Rowdy Energy. It’s cool to get everybody back to victory lane again this early in the season. To be able to get some of those points going our way now and hopefully – heck, I just remembered, the Buschy McBusch race. The Busch won it, what do you know, right on.”

How do you remain focused when you’re dealing with struggles outside of the race car?

“It’s hard sometimes. When you go through the lows, you go through the disappointment, you go through the dejection and the non-understanding of just whether or not you can still do it. There’s a sense of doubt there for sure. You just have to keep persevering, keep digging and putting your focus forward to be able to come out here and win this thing. Thanks to all the fans here at Kansas Speedway, it’s awesome to have people back and you guys coming out and supporting us for what we can do with the rules right now. Thanks to my team, everybody at Toyota, TRD – the M&M’s Camry was awesome today. Ben Beshore, it’s his first win as a crew chief. Happy for him, happy for my guys – let’s celebrate.”

What does it mean to get back to victory lane?

“It’s awesome. Just such a testament to this team and everybody at Joe Gibbs Racing. Ben Beshore, his first win as a Cup crew chief. It’s awesome to put M&M’s back in victory lane – M&M’s Mix on board with us here this weekend. Super thanks to our vendor partner, Hy-Vee, they did a cool promotion with Rowdy Energy and M&M’s a couple weeks ago. Great things going all around. It’s cool to come back to Kansas, it’s great to get back to victory lane. I have to thank my teammate, (Martin) Truex Jr. I forgot to mention it on television, but I just saw the replay and he was behind me, pushing me and gave me one hell of a run down the frontstretch to get me clear. That was the winning ticket for us.”

What is the key to getting the upper hand on the restarts?

“I don’t know that you really know. You don’t know who’s going to pick behind you. You can guess, but you don’t really know. A couple of the times that I guessed, I guessed right. A couple times I guessed, I guessed wrong. It’s just a matter of what’s going to happen behind you. I felt like if I could get Truex behind me, that would be the best thing for us. Being a teammate, he would help push and I’d tell him when we’re going to get the best run we could and it all worked.”

What does it mean to get a win this early in the season?

“What’s really cool is that we started the race good and we worked our way forward from the start of the race. We made minor adjustments all day to the car and nothing really did anything. We kept getting tighter as the day went on, even though we were trying to free up. We did a long sim session this week, that was helpful. I feel like we’re really close for Kansas at least and what we can do and what we can learn on that. I look forward to hopefully being able to celebrate with my team and hopefully have a good night tonight. It’s cool to be able to work the way we did today.”