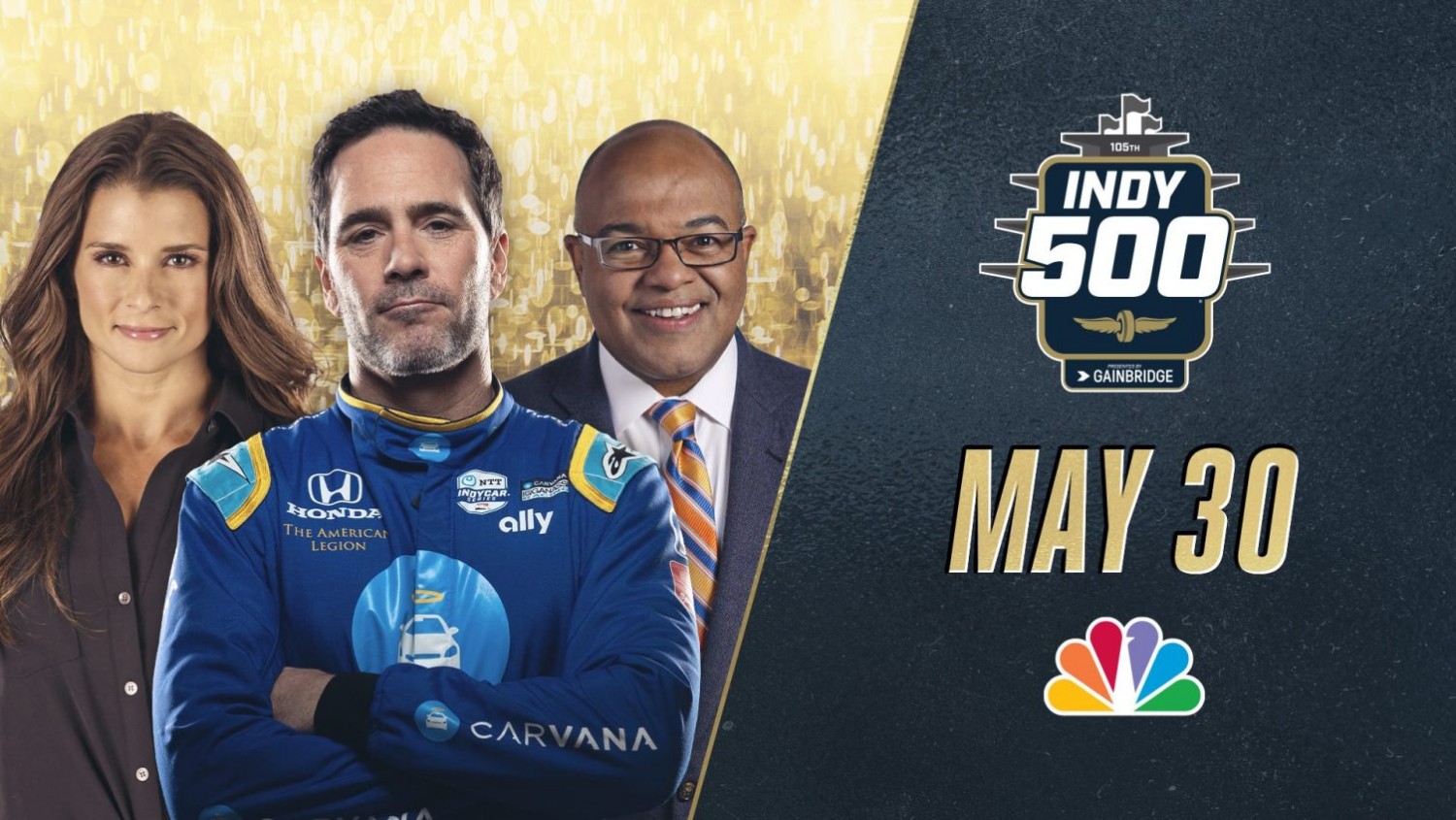 As the Month of May gets underway, NBC Sports announced today that Jimmie Johnson will join Mike Tirico and Danica Patrick for its studio coverage of the 105th Running of the Indianapolis 500 presented by Gainbridge at 11 a.m. ET on Sunday, May 30. NBC Sports host Mike Tirico and studio analyst Danica Patrick return to Indianapolis 500 coverage for the third consecutive year, with INDYCAR rookie and seven-time NASCAR Cup Series champion Jimmie Johnson making his on-air debut as a Peacock Pit Box analyst alongside NBC Sports’ Steve Letarte, his former NASCAR crew chief.

Tirico and Patrick reprise their Indy 500 roles from the past two races, contributing to pre-race, in-race, and post-race coverage. One of the most versatile voices in sports, Tirico also hosts NBC Olympics’ primetime coverage, Football Night in America and many other premier events across the NBC Sports portfolio of properties. Patrick, one of motorsports’ most popular personalities, is a former INDYCAR and NASCAR driver who became the first woman to lead laps and earn a top-five finish in the Indianapolis 500 in 2005.

“It continues to be an honor to be a part of the Indy 500 NBC Sports team for the third year in a row alongside Mike Tirico,” said Patrick. “I look forward to the experience more every year. In fact, it’s similar to the way it felt driving, as time passes, the gravity of the event becomes greater. I felt it from the inside, and now I am feeling it from the outside. On a competitive note, what has been obvious so far this season, is how many great young drivers there are. It will be fun to see how they stack up to the veterans on the big stage.”

A seven-time NASCAR Cup Series champion, Johnson made his NTT INDYCAR SERIES debut this season at the Honda Indy Grand Prix of Alabama and will compete at street and road circuits throughout 2021. Johnson will serve as an analyst on race day and Qualifying weekend, working at the Peacock Pit Box alongside Letarte, who will also be making his Indy 500 on-air debut.

“To say I am excited for May in Indianapolis is an understatement,” said Johnson. “This will be my first in person Indianapolis 500 experience, and I absolutely cannot wait to take it all in. I’m really excited to be working alongside Mike Tirico, who is one of my favorite hosts, and sitting on the Peacock Pit Box with Steve Letarte will be so much fun, as we go way back. I’m so appreciative to NBC Sports for this opportunity and I’m ready to have some fun and hopefully make it fun for the fans watching at home.”

“We are thrilled to have Mike and Danica return as well as add Jimmie to our Indy 500 coverage this May,” said Sam Flood, Executive Producer and President, Production, NBC Sports & NBCSN. “Danica’s and Jimmie’s racing insights, along with Mike anchoring our broadcast from historic Indianapolis Motor Speedway, will add another gear to Leigh, Townsend, Paul and our pit reporters’ coverage of The Greatest Spectacle in Racing.”

NBC Sports and Peacock Premium will surround the 105th Running of the Indianapolis 500 with 55+ hours of coverage, including every practice session, qualifying, Carb Day and eight hours of race-day coverage from iconic Indianapolis Motor Speedway. Complete programming details will be announced in the near future.

Coverage of the 2021 NTT INDYCAR SERIES continues on Saturday, May 15, with the GMR Grand Prix from the IMS road course at 2:30 p.m. ET on NBC. Click here for more information on NBC Sports’ comprehensive coverage of the 2021 INDYCAR season.