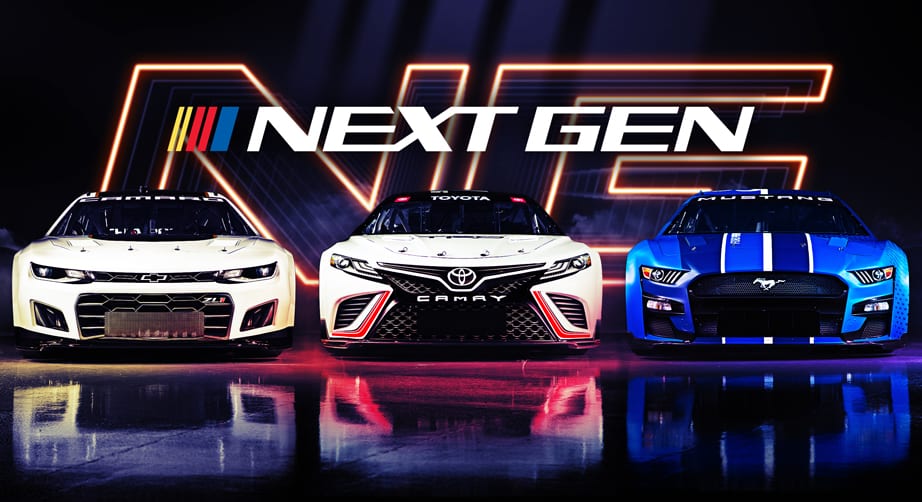 What started after the 2018 season as a clean sheet of paper in NASCAR’s Research & Development Center is now delivered, dressed and ready for its close-up.

NASCAR’s three automakers released their Next Gen models for Cup Series competition in 2022 on Wednesday at The Park Expo in Charlotte, North Carolina, ushering in a new era of the “Rebirth of Stock.” The model that began its life with a Gen-7 codename and was previously seen in testing prototypes with camouflaged or generic wrap designs has now emerged with three sleek bodies specific to each Original Equipment Manufacturer (OEM).

Wednesday’s public debut of the Next Gen Chevrolet Camaro ZL1, the Ford Mustang and the Toyota TRD Camry for 2022 showed off some of those car-specific characteristics. But in dialing back toward more of a stock feel for better relevance to their production-car counterparts, the Next Gen car also showed off plenty of new components — some that had shown up on test-mule prototypes, but some that the NASCAR industry and fans saw in detail for the first time.

“I think that at the highest level, one of the main goals is just that the sport remains healthy and strong, that it remains attractive to our current OEMs, teams and fans, but also attracts new ones,” said John Probst, NASCAR’s senior vice president of racing innovation. “As we kind of dive into that, it’s sort of your overarching goal. Then we know to be attractive to our OEMs, we need to be relevant to them.”

• The body of the Next Gen car is designed to be symmetrical, removing the skew and tail offset from the centerline that teams have used to create right-side sideforce. “Again, back to putting the car in the drivers’ hands,” Probst says. “Bigger tires, we’ll have more mechanical grip for them to lean on the tires vs. lean on the body, if you will, through aero.”

The car will also be two inches higher off the ground, with a new splitter up front, a flat underbody and a rear diffuser that channels and transitions airflow moving under the car and reduces the effects of more disruptive “dirty” air behind it.

• With safety at the top of mind, the redesigned chassis will feature energy-absorbing foam bumpers in front and back. The reinforced tubing will be rectangular, a shift from the current circular design. Roof flaps will carry over to the new-generation car, but it will also include a lower-mounted diffuser flap that deploys to help keep cars on the ground in the event of a backward slide at the series’ faster speedways.

• The Next Gen car will feature increased connectivity, with in-car cameras expected for every car in the Cup Series field — a boon for broadcast and online partners, and ultimately fans. “Our goal is to have more cameras and more camera angles than ever, so that we can engage our fans and get them inside the car with their favorite driver,” Probst says. “We’re working out how to get more data out of the ECU (electronic control unit), getting more camera angles, higher-definition cameras, 360 cameras — you name it — so that when this thing goes live in 2022 that we’re bringing our fans something they haven’t seen before, from the car perspective but also from the broadcast perspective.”

• The Next Gen car features a new sequential five-speed shifter, which allows drivers to bump forward and back to change gears — a departure from the traditional four-speed H-pattern. The new transaxle is expected to better accommodate the potential for a hybrid engine combination in later models, a timetable that remains uncertain for now.

“I think right now it’s something that we are certainly having a lot of discussions with our OEM partners about,” NASCAR President Steve Phelps said April 25. “The Next Gen car will certainly have the opportunity, if we decide to go to some form of electrification in a hybrid vehicle or hybrid engine, that the Next Gen car has the opportunity for us to drop that engine in there. The timing of it, it’s a difficult one, right? I would have said before COVID, we’re maybe looking at ’23. Timelines are tough just because we need to make sure that all the stakeholders who matter in this discussion, which are our race teams, our OEM partners, that they’re all aligned on what that would look like. It could be ’24. I think frankly the opportunity to have a new OEM partner will largely depend on what happens with that hybrid engine.”

• An independent rear suspension replaces the solid rear axle, and the Next Gen car will no longer have a track bar for adjustments. Teams will tune with five-way adjustable dampers and there will be a travel limiter to retain the higher ride height.

• The Next Gen car will move from a 15-inch wheel to an 18-inch diameter, and the material will be forged aluminum rather than the current steel. Tires will be wider, up from 10 inches to 12, with a smaller sidewall. Those new dimensions will emphasize mechanical grip with a larger contact patch, and Goodyear officials can build in softer tire compounds for increased grip and fall-off.

Even with a single, center-locking lug nut instead of the current five-lug configuration, tests have shown a half-second is needed to fasten the larger single lug, compared to the 0.8-second speed that a capable tire changer needs to hit all five. No dramatic changes are expected when it comes to the essential choreography of a pit stop.

• Each of the three Next Gen models will have manufacturer-specific hood louvers, a release point for ducts that transfer air out of radiator. The system is intended to decouple engine performance from aero performance, offsetting the practice of teams taping off air intakes and placing undue pressure and heat strain on the car’s engine.

• With the lower roofline and the potential for a decrease in rear visibility, drivers will be able to see behind them with the aid of a rear-mounted camera.

• The Next Gen car will feature larger brakes with a better thermal capacity, rack-and-pinion steering and a 20-gallon fuel cell, up approximately two gallons from the current model.