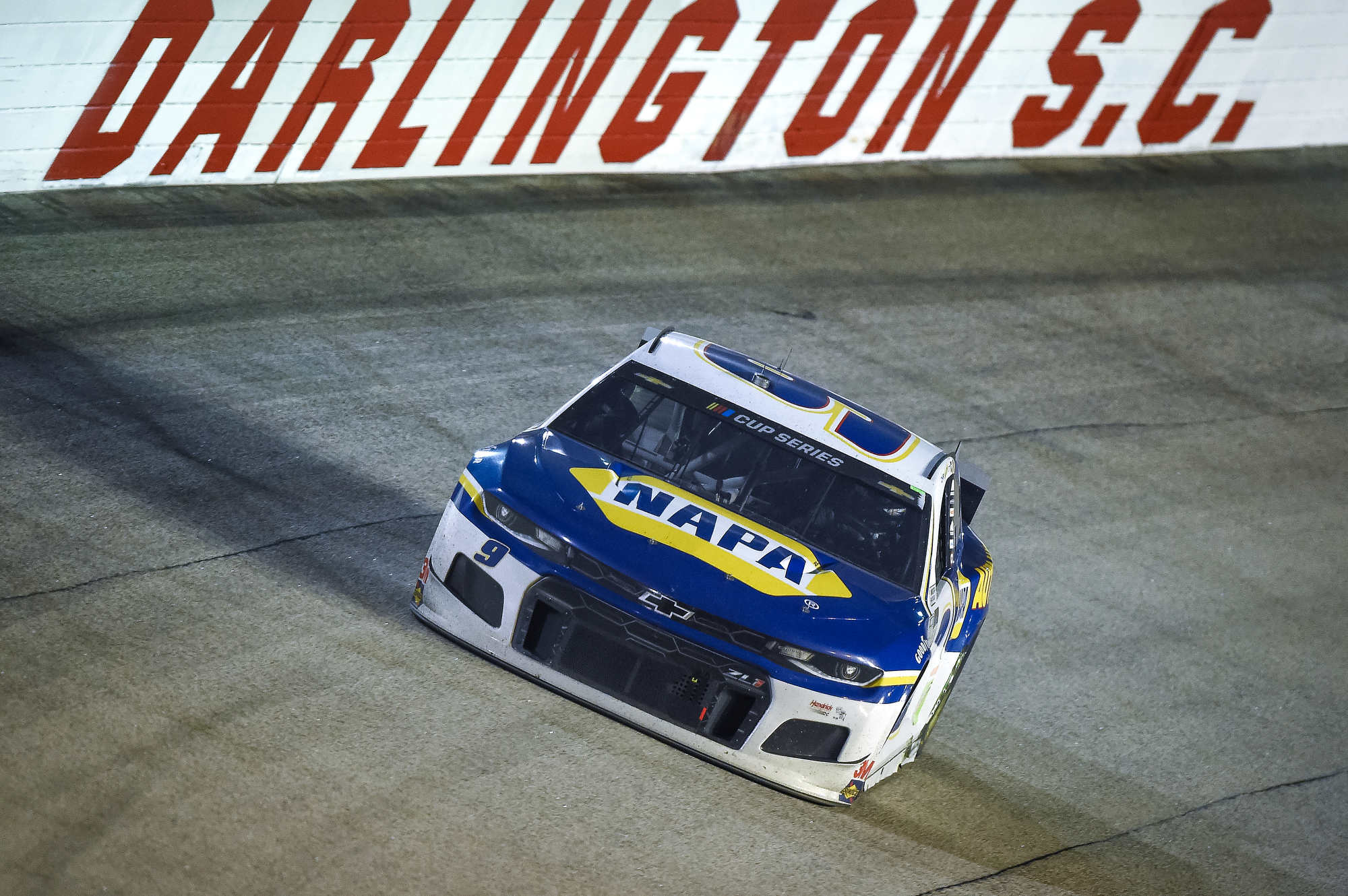 Can winless Darlington stalwarts triumph this week at The Lady in Black?

In a week of contrasts that featured the unveiling of NASCAR’s sleek Next Gen Cup Series cars, Darlington Raceway hosts its immensely popular Throwback Weekend, where race teams pay homage to the past.

But while race fans will see a panoply of paint schemes dedicated to bygone heroes of the sport, drivers will be looking ahead toward the finish line—particularly those accustomed to winning who haven’t done so yet this year.

At the top of that list are Denny Hamlin, Kevin Harvick and Chase Elliott, who haven’t scratched in the win column during the first 11 NASCAR Cup Series events of the 2021 season. Those three drivers combined to win 21 of the 36 points races last year—58.33 percent of the schedule.

In all probability, all three will be contending for the victory in Sunday’s Goodyear 400 at the 1.366-mile track (3:30 p.m. ET on FS1, MRN and SiriusXM NASCAR Radio).

Though winless, Hamlin leads the NASCAR Cup Series standings by a whopping 87 points over Joe Gibbs Racing teammate Martin Truex Jr. in second. But runs of 32nd at Talladega and 12th at Kansas broke a streak of six straight top-five results for the driver of the No. 11 Toyota.

“Darlington has always been one of my favorite tracks,” says Hamlin, who has three Cup wins and a five NASCAR Xfinity Series victories at The Lady in Black. “It’s a special place, and we’ve had some good wins there. Obviously, the last couple of weeks haven’t gone the way we’ve wanted them to, but Darlington is a place where we can bounce back and maybe even get into Victory Lane.”

Hamlin’s most recent triumph at Darlington came in last year’s second race there, during a season gerrymandered because of the coronavirus pandemic.

Harvick likewise is a three-time winner at the track. On the way to his series-best nine victories in 2020, the driver of the No. 4 Stewart-Haas Racing Ford won twice at the ‘Track too Tough to Tame’. Harvick also is the last driver to win at Darlington in a Chevrolet, a feat he accomplished in 2014 before Stewart-Haas switched to Ford.

“It’s been a lot of fun to have been able to win there a few times now,” Harvick says. “As you look at the last race there, winning the Southern 500 and being able to go back to Victory Lane and celebrate in front of some fans was different from the first time of dead silence (after the resumption with no fans during the pandemic).

“Darlington is one of those historic race tracks that everybody loves going to because of the fact that it’s forever tied to the guys that used to race there with the same shape of the race track. It may be a different surface, but it’s the same racetrack that they raced on in the 1950s. It’s a unique place to go race and a place that has so much history in our sport.”

Elliott, the reigning series champion, hasn’t won a Cup race at Darlington, but he did prevail in his first NASCAR Xfinity Series start there (2014).

“You want to be fast enough where that guy behind you is nowhere close,” Elliott says of his approach to the challenging track. “That’s where I want to be, and that how you want to position yourself at the end of those races, if you can.

“We definitely can be better, but I was pleased with our speed last year. We had some really good runs and were certainly solid, so we have something good to build off of.”

HEADING TO DARLINGTON, AJ ALLMENDINGER PRIMED FOR ANOTHER OVAL WIN

An acknowledged ace on road courses, Allmendinger predictably got his Cup win at Watkins Glen International in 2014 when he was driving for JTG/Daugherty Racing. Last year, he picked up his first Xfinity Series oval victory at Atlanta and proved that wasn’t a fluke by winning earlier this season at Las Vegas.

Though he has 11 career Cup Series starts at 1.366-mile Darlington (without a top-10 finish), this will be Allmendinger’s first trip around The Lady in Black in an Xfinity Series car.

“I’d be lying if I said Darlington is a place I’ve always been good at,” said Allmendinger, who drives the No. 16 Chevrolet for Kaulig Racing. “It’s a race track that is unique and unlike any other track in the world.

“It’s a challenge, but I know we’ll have really fast race cars there. We’ve put a lot of work into trying to improve our program at this track. We’ll have another shot to win $100,000 for the Xfinity Dash 4 Cash.”

In fact, Kaulig Racing features two of the four eligible drivers in the running for the Dash 4 Cash bonus at Darlington. Jeb Burton, winner of the rain-shortened race at Talladega, also can claim the prize by finishing higher than the other three eligible drivers. But the two Kaulig drivers will have to beat Noah Gragson, who claimed the first two $100,000 bonuses this year, and series leader Austin Cindric, the Talladega runner-up.

Brandon Jones, who went to Victory Lane in last year’s September race, is the only former Darlington winner in the field this week.

Ben Rhodes won last year’s event and—naturally enough, given the hiatus—revisits Darlington as the only former winner in the field this week. Rhodes also won the first two races of the 2021 season and will try to add a third victory in Friday night’s LiftKits4Less.com 200 (7:30 p.m. ET on FS1, MRN and SiriusXM NASCAR Radio).

After Rhodes’ two wins, Kyle Busch Motorsports swept the next five events on the schedule, keeping Ford and Chevrolet out of Victory Lane. Like Rhodes, KBM driver John Hunter Nemechek will try for his third triumph of the season in the first of three Triple Truck Challenge races, with a $50,000 bonus available to the winner.

For Rhodes, ThorSport Racing’s switch from Ford to Toyota between seasons has been an important aspect of his success.

“I think the big difference for us just has been Toyota’s engineering platform,” Rhodes says. “They’ve got so much engineering support and so much knowledge and data and information available to us that it really makes it night and day, not only strategy during the race, but when you are going to a place and you don’t have practice—what do you pull from?

“I think that’s the biggest difference is the fact they’ve got this wealth of knowledge and they’ve got this army of people, and together we’re working towards the future, not just looking over our shoulder the whole time at what we did in the past.”

The Date: Saturday, May 8