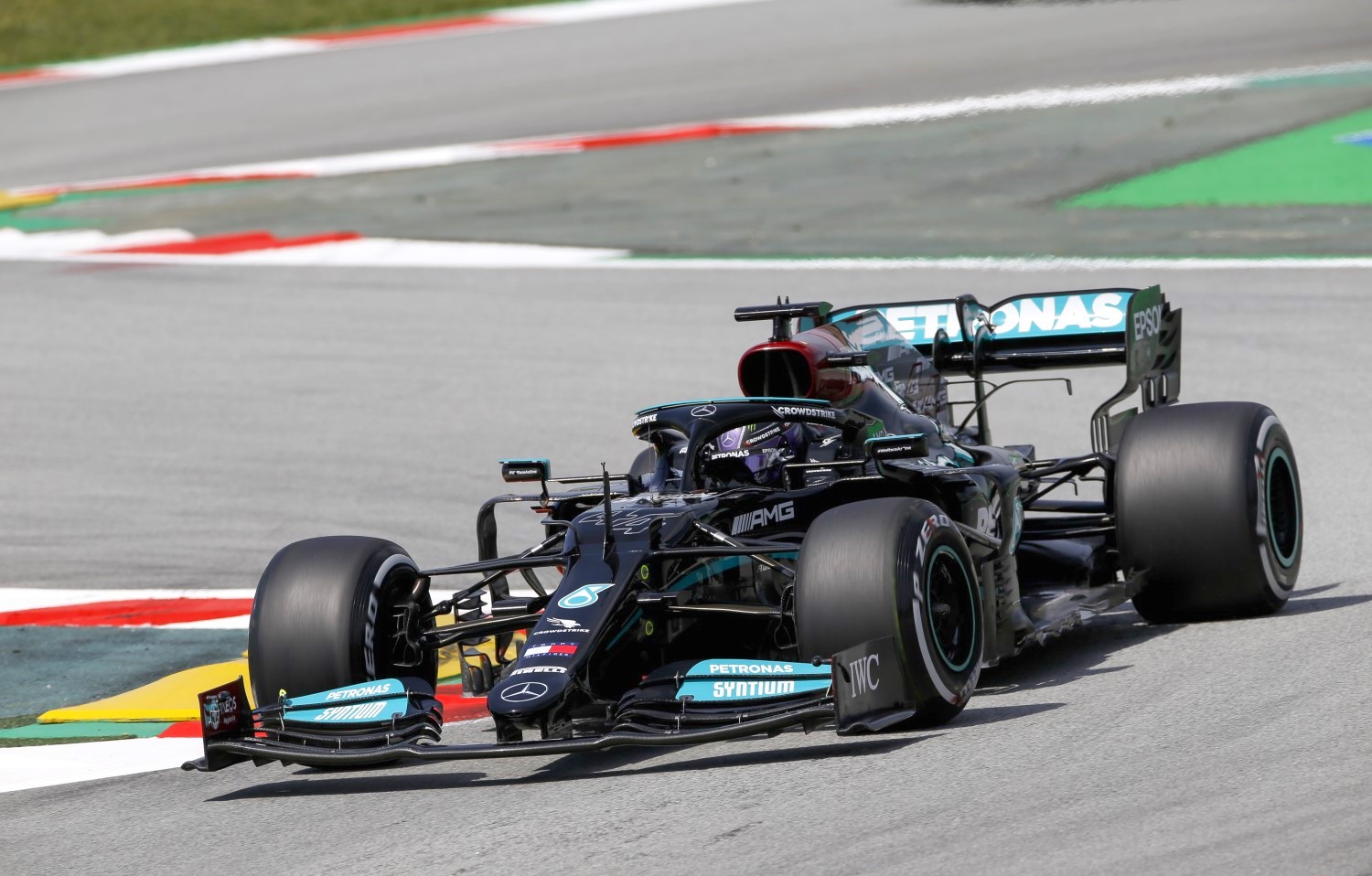 Lewis Hamilton (shown above) turned a lap of 1m18.170s to top the 2nd practice session for the Spanish GP at Barcelona by 0.139s over his Mercedes teammate Valtteri Bottas.

Hamilton has such an incredible record here, it is hard to see past him at times. Five wins, including every year since 2017 to go with five pole positions. It’s just one of ‘his’ tracks.

Charles Leclerc got the Ferrari fans hopes up with the third best time just 0.165s off of Hamilton.

Esteban Ocon, and Fernando Alonso rounded out the top-5 in their Alpines.

The biggest surprise was how slow the Red Bulls were, likely sandbagging. Sergio Perez was 10th, one spot behind his teammate Max Verstappen.

A good session for the Silver Arrows, a one-two, and their rivals nowhere to be seen. They will be by far the happier of the two top teams tonight.

Speaking of Red Bull, Perez struggled for pace despite getting a clean lap in, and wound up P10. Verstappen didn’t set a representative lap time on the softs after a costly mistake, languishing in ninth.  Add in a few off-track moments for the Dutchman who was either pushing the limits, or struggling to stay within them, and it was a far from ideal afternoon.

The top-4 were separated by just 1-second.

One practice session remains for Red Bull to get on top of their tricky car, and take the fight to Mercedes.

Aston Martin aren’t revealing too much about the upgrade that’s on both Lance Stroll, and Sebastian Vettel’s cars this weekend., but speaking to someone from the team ahead of FP2, the two drivers are reportedly happy with the new parts, and feel they’ve taken the AMR21 a step forward.

Last time out in Portugal, Aston Martin only had one set of upgrades available, which were fitted to the car of Lance Stroll. Here, Sebastian Vettel gets to run them too, and this is what his Team Principal had to say on their effectiveness.

“We had initial data in Portimao, we’ll have some more now to review, but the initial data we got off Lance’s car confirmed that they upgrade was working, and we’ll have more information here as well from both cars,” said Otmar Szafnauer, Aston Martin Team Principal.

“So once we analyze it, probably by tomorrow, I’ll know a little bit more., but it is working. [The upgrade’s] a combination, front wing, barge board, floor. It’s the whole floor structure that we’re improving, and we just trying to claw back the deficit from last year.

Lewis Hamilton
It’s been a good start to the weekend, the track is awesome, and our balance is similar to what we had in the last race. It looks close, but I think we’ve got good pace – we understand the car, and know which direction we need to go balance-wise. We made some tweaks along the way, I don’t know if the car got better through the session, but there were definitely findings there, and we’ll analyze the two sessions to hopefully have a better set-up for tomorrow. It’s amazing to see the progress that McLaren, Ferrari, and Alpine are making, not just Red Bull, and that puts pressure on us.

Valtteri Bottas
It was a solid day, the feeling in the car was not too bad, and no massive balance issues so I’m fairly happy. On the soft tire, getting both axles working straightaway for lap one is going to be key because the gaps will be so small. Tonight will be our usual process – fine tune the set-up as best as we can because we know every millisecond is going to be crucial in qualifying. The whole field seems to be close, and Ferrari looked strong today, but we just need to focus on our performance, and extract the maximum from this package.

Andrew Shovlin – Mercedes Engineer
We’ve managed to do some good work today, both drivers have a decent balance, and we look to be in a reasonable place on all compounds. Ahead of the weekend we were concerned that rear overheating would cause us more issues, but things seem to be under control, even in the hotter conditions of the afternoon session. We still have work to do getting the best out of the tire on low fuel as we didn’t find as much time as some, but we have a good baseline to work from. Traffic was difficult today, it’s a short lap, and it looked like Red Bull may have been affected by that more than ourselves so we’ll work on the assumption that they are very close on pace, and we need to find everything we can overnight.

Sebastian Vettel
“I think it was our best Friday of the year so far: plenty of laps for Lance, and me, and we have done some important homework ahead of the race. I felt happy today, and it was my opportunity to try the new parts, which are a step forward. It is hard to say exactly where we will be tomorrow in a very close midfield competition, but we will try to find a bit more tonight to squeeze a few more tenths of performance.”

Lance Stroll
“That was a really busy Friday covering lots of laps, and learning about the car. Even though it was windy, and hot out there, I felt comfortable, and we did some useful work today. It is a case of continuing to understand the car, and the new parts we have introduced, which seem to have taken us in a good direction. Today’s times showed just how close the grid will be here, and it is never easy to overtake on this track, so we have got to make sure we have a strong Saturday, and hook up the laps when it matters.”

Pierre Gasly
“I think overall FP2 was a good session for us, to finish sixth shows the car is strong. The pace of the car is definitely there, but the balance isn’t quite right yet, so we’ve got to make a few tweaks tonight to maximize our performance ahead of Qualifying tomorrow. Obviously, our main goal this weekend is to score points, as we’re fighting against tough opponents in the midfield pack, and I think if we can improve in the few areas that we’re struggling in we could be up for a good weekend.”

Yuki Tsunoda
“I’m happy with our performance, and the pace of the car today. I’ve driven this track a lot, so I know it well, which meant I could be more confident driving from the offset, unlike in Portugal where I was having to use each session to learn the circuit. I’m very positive ahead of tomorrow. I just need to focus on my own driving, and the set-up of the car before FP3, and Qualifying – this is what I will work on tonight with my engineers.”

MAX VERSTAPPEN
“Overall I think we actually had quite a good day, and the car seems pretty competitive. I was a little bit wide at Turn 10 on my push lap in FP2, but there is nothing shocking to report from either session. The track changes to Turn 10 seem better over one lap when you are pushing. It is a bit faster, and more enjoyable to drive, but for overtaking I think it could be worse. How competitive we are going to be tomorrow is always going to be a question mark on a Friday, but from our side we are quite happy. Of course you always want to improve, and do better so we just have to make sure tomorrow that we are up there, but I’m looking forward to it.”

SERGIO PEREZ
“It was a tricky day today. We had a couple of delays in both sessions which meant we were rushing a little, and running into some traffic, and with less practice time this year it’s important to get the laps in. Tonight we’ve got some understanding to do, and pace to find, especially over one lap. I think our long run pace is stronger, but there’s work to do. Let’s see what we can find because qualifying here is especially important. Hopefully we can recover the pace, and be in the mix tomorrow.”

Kimi Räikkönen
“I was able to do a good number of laps in the afternoon, which is always positive. I know the track really well, and there is effectively only one new corner to learn. The car didn’t feel too bad so we can be optimistic ahead of the rest of the weekend. We have work to do tonight, but so does everyone, and we will see tomorrow where we end up in qualifying.”

Antonio Giovinazzi
“All in all, it was a positive day in which we showed to be really close to the top ten. We need to find something more while looking at the data tonight, but we know qualifying will be decided by the smallest of margins. The track layout has improved, I like the new turn ten: I think it’s much better than the previous configuration. It remains a difficult corner, and one that can make the difference on the single lap.”

George Russell
It’s always tricky missing FP1, and having half the running, but it was great to get back out in the car after a difficult weekend in Portugal. In terms of the circuit, the new corner at Turn 10 is a nicer corner than the previous one, and is fun to drive. We look a little further away on the low fuel pace compared to where we usually are, but our high fuel pace seems relatively decent. Barcelona can be difficult with high tire degradation, and history has shown that we tend to struggle here, so Sunday will be interesting.

Nicholas Latifi:
t was a tricky Friday. Straight away in FP1 the track conditions were not very good with low grip out there. We made some improvements from one session to the next, but I still feel there is scope to improve the basic set-up of the car. We have still got some work to do, and were more focused on the high fuel race pace, as that was not particularly competitive in Portugal. We are not where we want to be, but we will do some work tonight, and see where we can improve.

Roy Nissany
Today was beautiful, the sun was shining, and I was back on the track. It felt great to jump in the car having spent a lot of time, and driven many kilometers, in the simulator. I enjoyed every second, and every meter of it, and I think the result reflects that. It was a productive day, good to be back, and I am looking forward to the next outing.