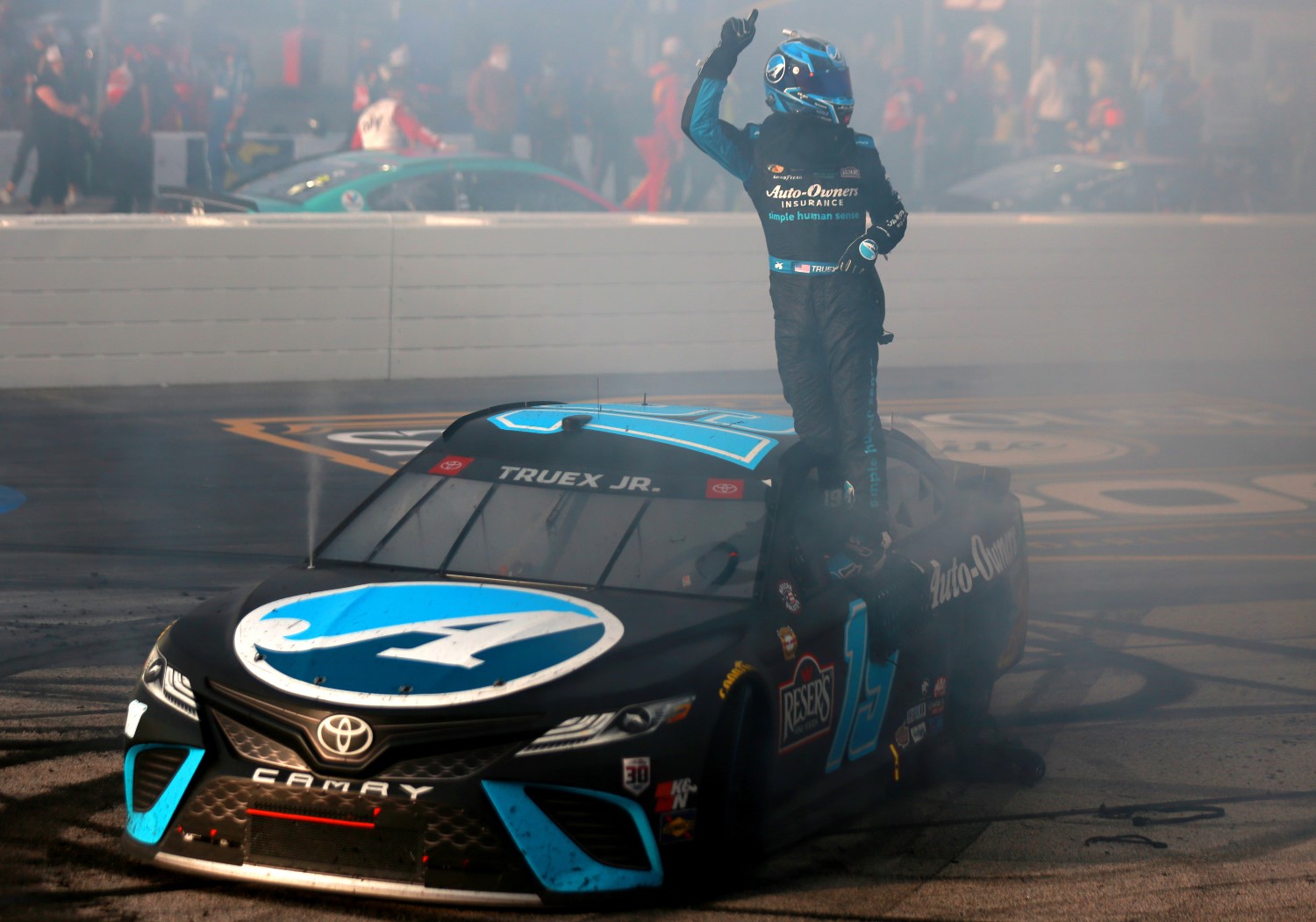 Martin Truex Jr. swept the Goodyear 400 Sunday at Darlington Raceway, leading a race-high 248 of the 293 laps in his No. 19 Joe Gibbs Racing Toyota. Kyle Larson stalked Truex toward the end but ultimately fell short by what turned out to be a rather aggressive 2.571 seconds.

Truex remains the only repeat winner in the NASCAR Cup Series, now boasting three 2021 victories. He’s at 30 wins for his career.

Truex swept the first two stages and led 248 laps to win his third event of the season and remain the only multiple winner in the series this year.

But after the final sequence of pit stops, Larson — who gained time by pitting one lap earlier than Truex — closed the leader’s advantage to .170 seconds on Lap 266 of 293 as the drivers worked stubborn lapped traffic.

Larson stayed within a second of Truex until the final few laps, when Truex finally pulled away to win by 2.571 seconds. No previous stage winner had ever gone on to claim victory at Darlington.

“We just had a good balance,” said Truex, who committed to run the top of the track throughout the race. “The car would do what I wanted it to do. I just had to manage those long runs. It was really loose that last run. I was nervous when the 5 (Larson) was catching us. We got mired in some traffic there, and that’s always tough …

“What an awesome team we have. Hopefully, we can keep this rolling.”

The victory was the second at Darlington for the driver of the No. 19 Joe Gibbs Racing Toyota and the 30th of his career. Truex was elated to win another race with the high-horsepower, low-downforce competition package used at Darlington this year.

“I think the most important part is we are winning with the low downforce package, which most of the Playoff races we run are,” Truex said. “Phoenix was a really, really big confidence booster for us – to go there and win.

“I feel like we’ve carried it since there. We just have to keep this thing going. Guys are doing a really good job all around. It’s so fun to drive race cars like that.”

Kyle Busch finished third, 6.209 seconds back. Fourth-place William Byron was 17.067 seconds in arrears and fifth-place Denny Hamlin was 21.939 seconds behind his JGR teammate, as only nine cars remained on the lead lap at the finish.

Larson lopped two seconds off Truex’s advantage during the final exchange of pit stops but couldn’t pull off a winning pass.

“I was surprised that I was able to get to him,” said Larson, who posted his sixth top-10 result in seven Darlington starts and improved his average finish at the track to a series-best 6.0.

“I caught him, I closed on pit road, was riding and actually had an opportunity to get by and thought I’d stay patient, and he was better on the long run.”

As close as Larson made it near the end, the first two stages were an absolute runaway.

Truex’s Camry was decked out in an Auto-Owners Insurance paint scheme. The only other time Truex had used that livery at Darlington was in 2016 — and that was the only time he had ever won a Cup race at the track.

But the nod to 2016 wasn’t the only throwback involved. In harkening to 2016, Truex was recalling a season in which he achieved the sort of dominance he enjoyed on Sunday afternoon.

At Charlotte Motor Speedway, the 40-year-old from Mayetta, New Jersey, put a permanent stamp on the Cup Series with an utterly dominant run in the Coca-Cola 600. Truex led 392 of 400 laps, translating to a NASCAR-record 588 of 600 miles.

By the time he took the green/checkered flag on Saturday to complete a sweep of the first two stages, Truex had a 14.516-second lead over Kyle Busch.

And for much of Sunday afternoon, the race threatened to present a similar outcome — until Larson intervened.

No stage winner has ever won at Darlington, but you broke that curse today.

“I’m glad I could do that. We have won a bunch of stage over these last few years – just Lady Luck always got us. Track position, it would be one thing or the other. I’m extremely proud of everyone on this Auto Owners Camry. I think this flat black is a throwback to you, Regan (Smith), when you won here. It’s really cool to throwback to Furniture Row. Hopefully Barney Visser (owner, Furniture Row Racing) is out here watching. I know, Regan, you and I both owe him a lot, but this one is for Furniture Row. It’s pretty cool.”

Your car was so close to the fence. Was your car that good that you could manage that?

“We just had a good balance. The car would do what I wanted it to do. I just had to manage those long runs. It was really loose that last run. I was nervous when the 5 (Kyle Larson) was catching us. We got mired in some traffic there, and that’s always tough. Thanks to Auto Owners, Bass Pro Shops, TRD, Toyota, Cessna, Noble Aerospace, Garmin, Oakley, everybody that helps us, Reser’s Fine Foods. We are really lucky to get to do this. I’m so lucky to get to drive for these guys. What an awesome team we have. Hopefully, we can keep this rolling.”

How good was your car today?

“I thought at times it could have been better, but obviously, it was better than everybody else’s and that’s the key with this low downforce. Even this thing was a handful at the end of those long runs. You just have no tires left and you are sliding all over the place and you can’t get ahold of it. You are just trying to manage your stuff. Awesome job by our Auto Owners Camry team today. Everybody at JGR (Joe Gibbs Racing). It was definitely a hot rod. It looked like all of our cars were pretty good too. Good day for the company. I’m really happy to win on Mother’s Day. Happy Mother’s Day to all of the mom’s out there, especially mine.”

How challenging is it to manage a car this good?

“If you pull off the wall, you are four tenths slower, and your tires get burnt off. I ran where I had to run. That’s the reason I was fast – because of where I was running. That risk is what you have to do to be fast on a long run. It worked today, and hopefully, we will be able to come back here in the fall and do it again. I’m just real excited to be able to win here again. This is an awesome place; throwback weekend is really special. This is a good one. This is a big one. Even though this isn’t the Southern 500, it is pretty damn cool to win at Darlington, no matter when it is.”

How good do you feel as the only driver with three wins?

“No question, we feel really, really good about that. I think the most important part is we are winning with the low downforce package, which most of the Playoff races we run are. Phoenix was a really, really big confidence booster for us – to go there and win. I feel like we’ve carried it since there. We just have to keep this thing going. Guys are doing a really good job, all around. It’s so fun to drive race cars like that. I’m just so thank for all of those guys that work so hard – men and women back JGR (Joe Gibbs Racing) for the job they do. Toyota, TRD for giving us all the help they do with the engines and everything else. It takes a lot of people to make these cars go fast, and I’m really lucky to be able to sit behind the wheel of this one today.”