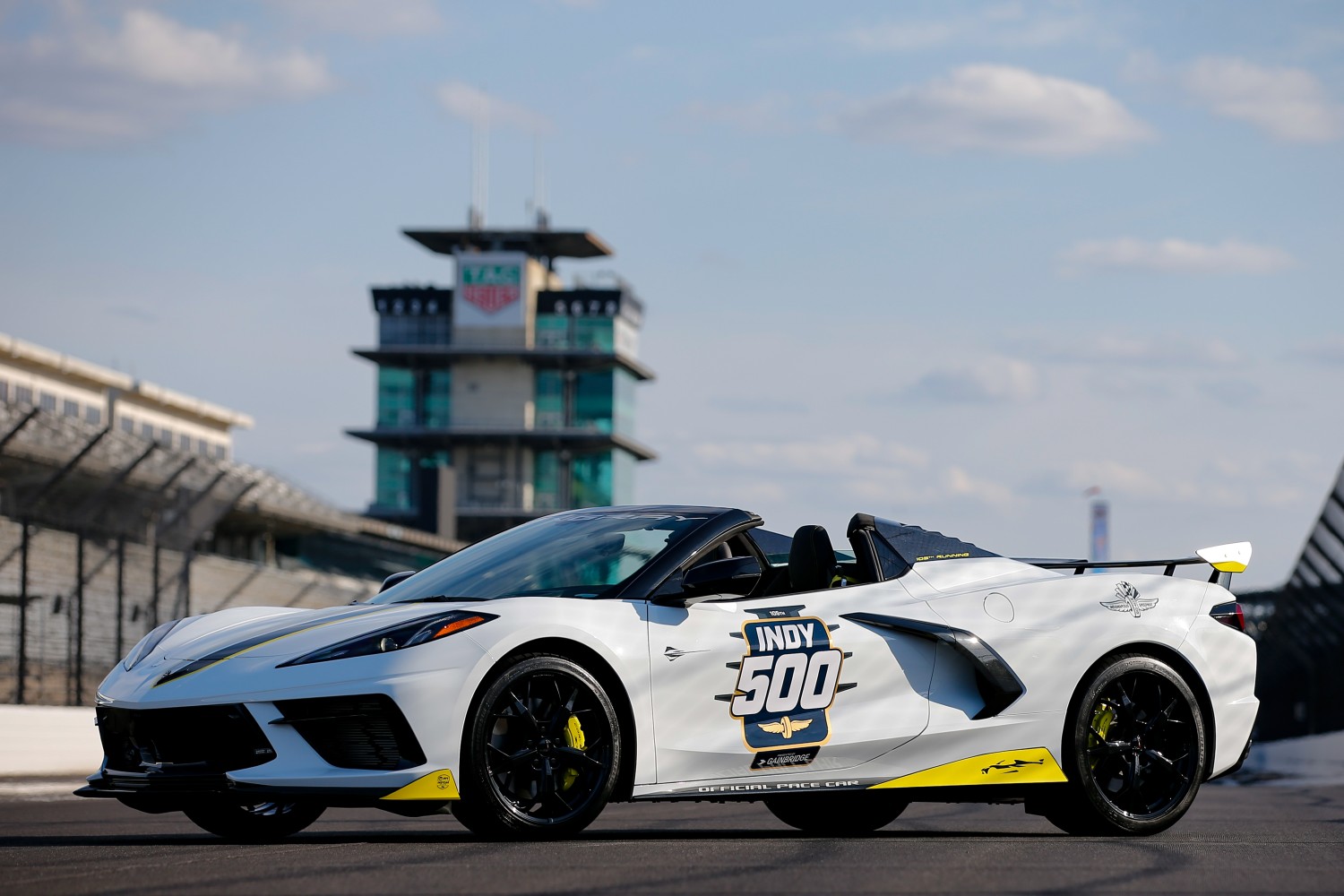 The 2021 mid-engine Chevrolet Corvette Stingray hardtop convertible will lead the 33-car field to the green flag for the 105th Running of the Indianapolis 500 presented by Gainbridge on May 30, 2021. The Arctic White Stingray will be the first convertible since 2008 to pace the iconic race.

Chevrolet and Corvette have led the starting field more than any other manufacturer and nameplate, respectively. The 2021 race marks the 32nd time for Chevrolet to pace dating back to 1948, and the 18th time since 1978 for America’s favorite sports car.

“The Chevrolet team is privileged every time we’re invited to pace the Indianapolis 500,” said Steve Majoros, vice president of Chevrolet Marketing. “We are confident the track-capable Corvette Stingray Convertible will catch every race fan’s eye as it leads the pack toward the Yard of Bricks. From the color scheme, to the special race weekend decals and how the safety lighting is skillfully integrated into the nacelles of the hard-top convertible Corvette’s revolutionary appearance, we’re putting Chevrolet’s best on display for the fans.”

The exterior and interior of the Corvette Convertible will be on full display as the car fulfills responsibilities on and off track. Sky Cool Gray and Strike Yellow upholstery selected for the cabin influenced the racy exterior appearance of the pace car. A close look at the car reveals Indianapolis 500 logos adapted specifically for pace car use, an exclusive stripe package, unique Stingray decals and more.

For racers, highly visible safety lighting on the pace car is a top priority. Corvette designers prioritized form and function by incorporating four lights into each of the tonneau cover nacelles, in addition to strobe lights in the headlights, front louvers and taillights. This maintains the Corvette Convertible’s signature silhouette and eliminates need for a traditional lightbar.

“The 2021 Corvette Stingray hardtop convertible is such a world-class performance car that’s a perfect match to lead the talented field of 33 drivers to the green flag in ‘The Greatest Spectacle in Racing,’” Indianapolis Motor Speedway President J. Douglas Boles said. “We continue to be grateful for our strong, enduring partnership with Chevrolet and its many contributions to the success of our events and the exciting appeal of competition at the Racing Capital of the World.”

The mid-engine 2021 Corvette Stingray was engineered first and foremost as a convertible. The convertible maintains the tunnel-dominant structure and use of high-integrity die-cast parts found in the Stingray coupe.

Like the coupe, the Stingray convertible’s design was inspired by fighter jets. The tonneau cover features aerodynamically shaped nacelles influenced by the housing used for jet engines. The nacelles, which were also used as inspiration on the Chevrolet Engineering Research Vehicle (CERV) I and II, as well as the Corvette SS and SR2 concepts, help reduce air recirculation into the cabin and provide a remarkably exotic profile with the top up or down. The tonneau also provides a rear power-adjustable window and a vent for mid-engine cooling.

The 2021 Corvette Stingray convertible is powered by the next-generation 6.2L Small Block V-8 LT2 engine, the only naturally aspirated V-8 in the segment. It will produce 495 horsepower (369 kW) and 470 lb-ft (637 Nm) of torque when equipped with performance exhaust — the most horsepower and torque for any entry Corvette.

The LT2 is paired with Chevrolet’s first eight-speed dual-clutch transmission, which provides lightning-fast shifts and excellent power transfer. This transmission is uniquely designed to provide the best of both worlds: the spirited, directly connected feeling of a manual and the premium driving comfort of an automatic. The double-paddle de-clutch feature even allows the driver to disconnect the clutch by holding both paddles for more manual control.

When combined, the advanced propulsion system, revised chassis tuning and retractable hardtop make the Stingray the most no-compromise Corvette convertible in history.

Chevrolet has a storied history at Indianapolis Motor Speedway. Chevrolet was founded in 1911, the year of the inaugural 500-mile race. Company co-founder and namesake Louis Chevrolet, along with brothers Arthur and Gaston, competed in early Indy 500s. Arthur competed in the 1911 race and Gaston won in 1920.