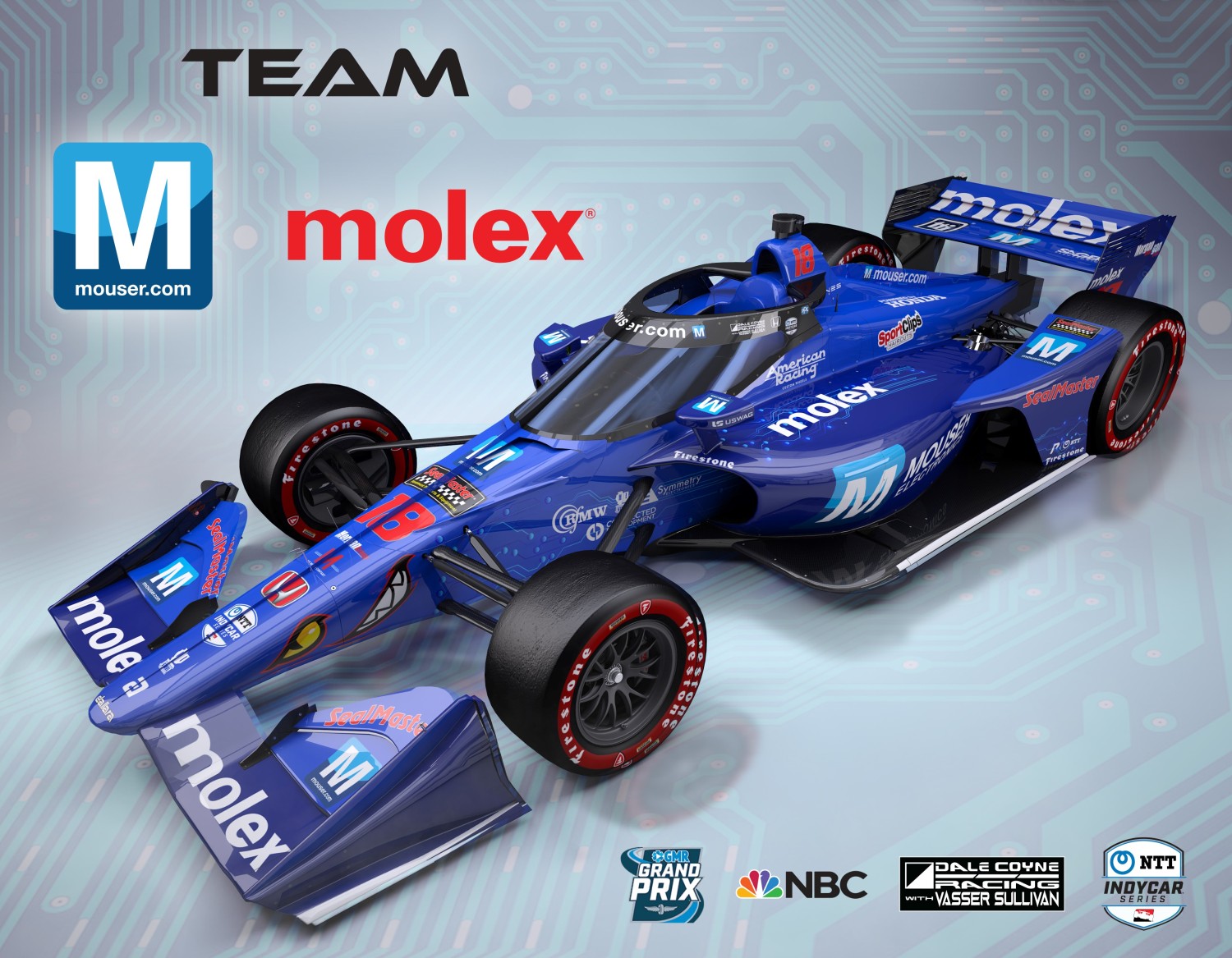 Vasser Sullivan Racing is excited to announce that Mouser Electronics, Inc. and Molex, LLC will be the primary co-sponsors of the No. 18 Mouser Molex – Dale Coyne with Vasser Sullivan entry for the GMR Grand Prix.

This is the fourth consecutive year that Mouser and Molex have teamed-up to be co-primary sponsors and the celebration of a 10 year partnership between Mouser and Vasser Sullivan.

Mouser first sponsored INDYCAR racing in 2011 as an inventive way to communicate its performance-driven business model and promote the newest technologies. The Mouser and Molex-sponsored car won the Indianapolis 500 in 2013 as well as the 2017 and 2018 series-opening races at St. Petersburg, Florida. In 2018 and 2019 Mouser and Molex were the co-primary sponsors of the No. 18 Dale Coyne Vasser Sullivan car at the Honda Indy Grand Prix of Toronto and in 2020 they sponsored the No. 18 entry at the GMR Grand Prix.

The No. 18 entry will be piloted by Ed Jones in the upcoming GMR Grand Prix, May 15 on the 2.439-mile, 14-turn Indianapolis Motor Speedway road course.

Jones is the 2017 INDYCAR Rookie of the Year and was the top-rookie finisher in the 2017 Indianapolis 500, placing third. He is also the 2016 Indy Lights Champion. Jones has made 51 INDYCAR starts earning 14 top-10 finishes including three podium performances, the third at Indy in 2017, and third at Long Beach and Detroit Race 2 in 2018. Jones, 26, was born in Dubai, United Arab Emirates (of British citizenship) and currently resides in Miami, Florida.

Fred Bell, Vice President of Global Distribution, Molex:
“We are excited to cheer on the team as the No. 18 car flies Mouser and Molex colors. All of us at Molex are honored to once again team up with Mouser to sponsor the No. 18 car this season. This sponsorship further demonstrates our long-term relationship with Mouser, commitment to our joint customers and driving new innovations in the automotive industry.”

James “Sulli” Sullivan, Team co-owner Dale Coyne Racing w/ Vasser-Sullivan:
”Mouser and Molex have been a part of the Vasser Sullivan racing family for a decade, and we’re super proud of it.  This partnership is set to be more relevant than it ever has been with the coming hybridization of our IndyCar.  The knowledge and tools Mouser and Molex possess are a big catalyst to our future, these guys are the standard in the industry.”

Ed Jones, Driver No. 18 Mouser Molex – Dale Coyne Racing w/ Vasser-Sullivan Honda:
“I’m really proud that Mouser and Molex are co-primary sponsors of the No. 18 Coyne Vasser Sullivan entry for the GMR Grand Prix. Mouser and Molex have supported the INDYCAR SERIES for a long time and have supported our team for ten years. The fact that they are taking on the primary role for this race is a huge compliment and I am honored to be piloting the Mouser Molex machine.