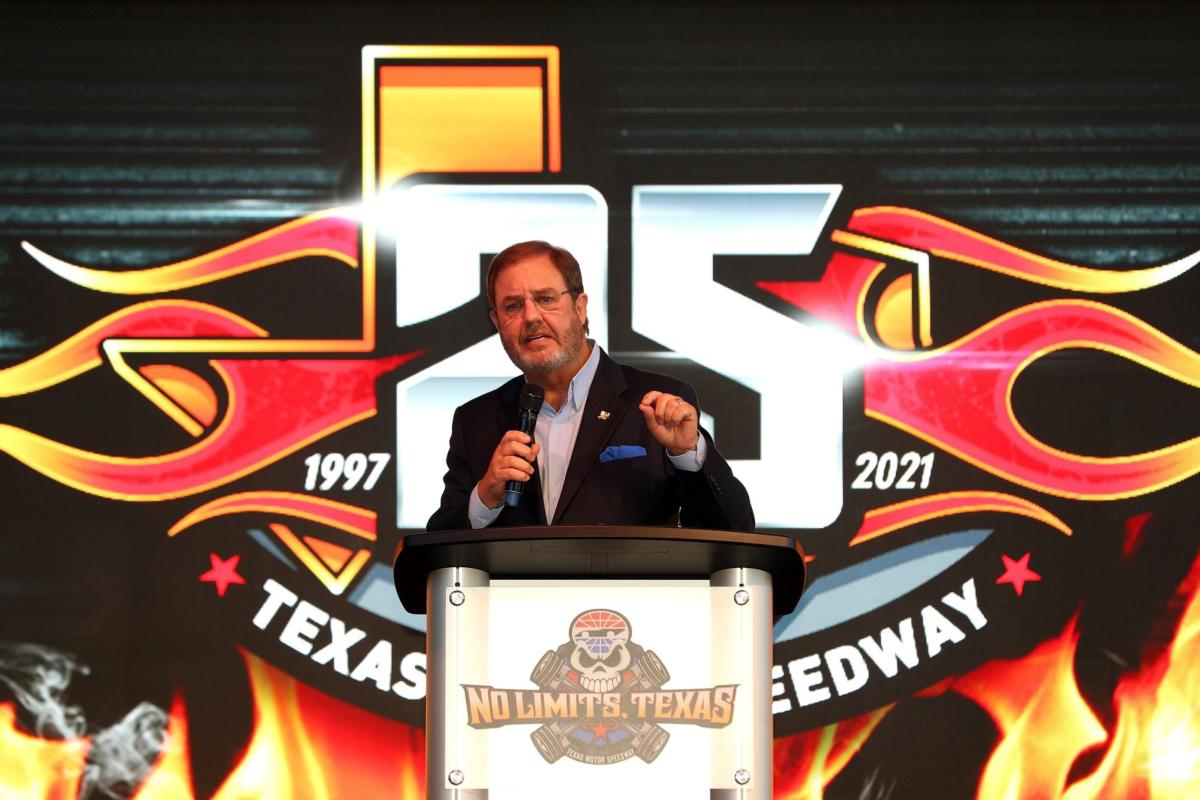 After more than three decades of service to race fans on behalf of Speedway Motorsports, including the last 25 years at Texas Motor Speedway, Eddie Gossage will step down as President of The Great American Speedway following the June 13 NASCAR All-Star Race.

“The timing just feels right after 32 years with the company,” Gossage stated. “The Smith family and Speedway Motorsports changed my life and I will forever be appreciative and grateful.

“Before my wife Melinda and I chart our next adventure, I’m thankful that I get to come full circle as a promoter with the NASCAR All-Star Race.”

After working for Nashville International Raceway, Bristol International Raceway and Miller Brewing Company in motorsports management and public relations capacities, Gossage joined Speedway Motorsports in 1989 as the Vice President of Public Relations at Charlotte Motor Speedway. He honed his skill for promotional flair under the guidance of Speedway Motorsports Executive Chairman Bruton Smith and then Charlotte Motor Speedway President Humpy Wheeler. During one Gossage produced press conference in 1992 to promote the first NASCAR All-Star Race to run at night, the young promoter rigged a giant light switch to highlight the innovative new lighting system at the superspeedway. When Smith threw the switch, sparks flew, setting the speedway founder and owner’s hair on fire.

“I thought I was headed for the unemployment line for sure,” laughed Gossage. “But for some reason, Bruton kept me around, and it wasn’t long after that he gave me an opportunity I could have only dreamed of.”

Smith took Gossage under his wing as he began to purchase property in North Texas and design plans for what would become not only the finest motorsports facility in Texas, but also one of the most spectacular entertainment venues in the world. The 1,500-acre complex includes a 1.5-mile superspeedway,194 luxury suites, 76 condominiums, a nine-story Speedway Club, Class A office space and the 11,000-seat, four-tenths-mile Texas Motor Speedway Dirt Track. Smith named Gossage General Manager of Texas Motor Speedway in 1995 and added the title of TMS President in 2004. Now 62, Gossage is one of the longest-tenured employees at Speedway Motorsports.

“When I built Texas Motor Speedway, I had plenty of architects, accountants and attorneys, but what I really needed was promotion,” said Smith. “That’s where Eddie came in. They say ‘everything’s bigger in Texas’, and I needed a big personality in Dallas/Fort Worth. Eddie’s become a shrewd businessman over the years, but he’s remained a publicist at heart, and he never forgot what the entertainment business is about—having FUN.

“I am grateful for all that Eddie has done for our company. He’s been a promoter, friend and an asset to the entire motorsports industry.”

“In my career, I’ve been blessed to meet presidents, world leaders, astronauts, scholars, world-famous athletes, actors and musicians, millionaires and billionaires,” said Gossage. “Of them all, Bruton Smith is the greatest man I’ve ever met. I thank God I met Bruton and that he selected me to head up Texas Motor Speedway. His continued trust in me is an honor I consider part of one of the most cherished relationships two men could enjoy.”

Under Gossage’s leadership, Texas Motor Speedway has hosted millions of fans at NASCAR, IndyCar and World of Outlaw races, produced car shows and concerts with The Rolling Stones, ZZ Top and Willie Nelson, and in 2015, built the world’s largest LED high-definition television, the 22,704 square-foot ‘Big Hoss’.

“Eddie Gossage has been synonymous with Texas Motor Speedway’s success, and his contributions to our company and the speedway’s impact on the state of Texas during his career are immeasurable,” said Speedway Motorsports President and CEO Marcus Smith. “Beyond the big events, wild pre-race shows and publicity stunts, Eddie has always been the biggest fan of the fans. No one has more desire to give them a memorable experience. I’ll always be thankful for his dedication to our company and the inspiration he’s given our staff to always put the fans first.”

“The NASCAR All-Star Race was one of the first major events I promoted at Charlotte,” Gossage said. “I’ve wanted to bring it to Texas for years. I’m glad Marcus made it happen, and I’m thankful for each and every opportunity he’s continued to give me since becoming CEO. Like with his dad, Speedway Motorsports is in good hands with Marcus.

“I’m not sure what my next adventure will be. I do know Melinda and I are looking forward to some more fun with the grandkids,” Gossage said with his trademark smile. “But first, we’re going to corral some Texas-size fun one last time with the fans at the NASCAR All-Star Race!”

Speedway Motorsports will launch a nationwide search for Gossage’s successor.