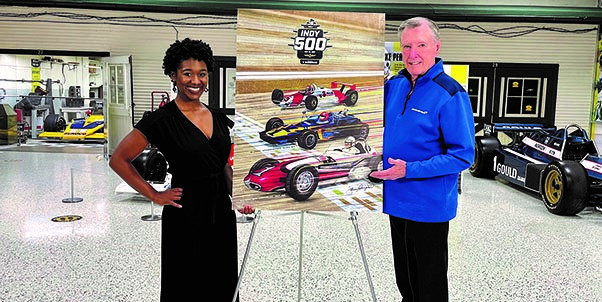 The 2021 Indianapolis 500 presented by Gainbridge Official Souvenir Program is on sale now and features one of the most unique covers in race history: A three-time Indy 500 winner drawing his friends and rivals, the race’s four-time winners.

Johnny Rutherford, winner of the 1974, ’76 and ’80 Indianapolis 500 and a passionate artist, used a pencil method to draw the cars of the winningest drivers in Indy 500 history who all share an anniversary in 2021 – A.J. Foyt, Al Unser and Rick Mears – for this year’s program cover.

“It’s an honor to be able to be a part of this project and to do this program cover,” Rutherford said. “I just hope the fans like it and everybody enjoys the fact that it was me, a three-time winner here, that drew that. Add this to what I’ve accomplished at the Indianapolis Motor Speedway in my career, and it’s special.”

The program cover was an artistic collaboration between Rutherford and IMS graphic designer Amiah Mims. After Rutherford provided the drawings of the cars, Mims reimagined the 1980 INDYCAR SERIES champion’s artwork in a digital format and integrated it onto a digitally created background that highlights the cars Rutherford drew, as well as the world-famous Yard of Bricks.

“Designing, illustrating and painting has always been my passion, and I’m proud to be able to use my love for art to help tell the history of the Indianapolis 500,” Mims said. “It’s an honor to be one of many artists to have had a part in the Indianapolis 500 and to work alongside a legend like Johnny Rutherford.”

The 208-page souvenir program is available now for $15 at shop.ims.com and at Official Trackside Gift Shops at IMS and the Indianapolis Motor Speedway Museum.

Many great feature stories about “The Greatest Spectacle in Racing” are included in the program, covering topics such as:

The Official Program also features biographies of drivers attempting to make the field of 33 for the 105th Running of the Indianapolis 500 presented by Gainbridge on Sunday, May 30