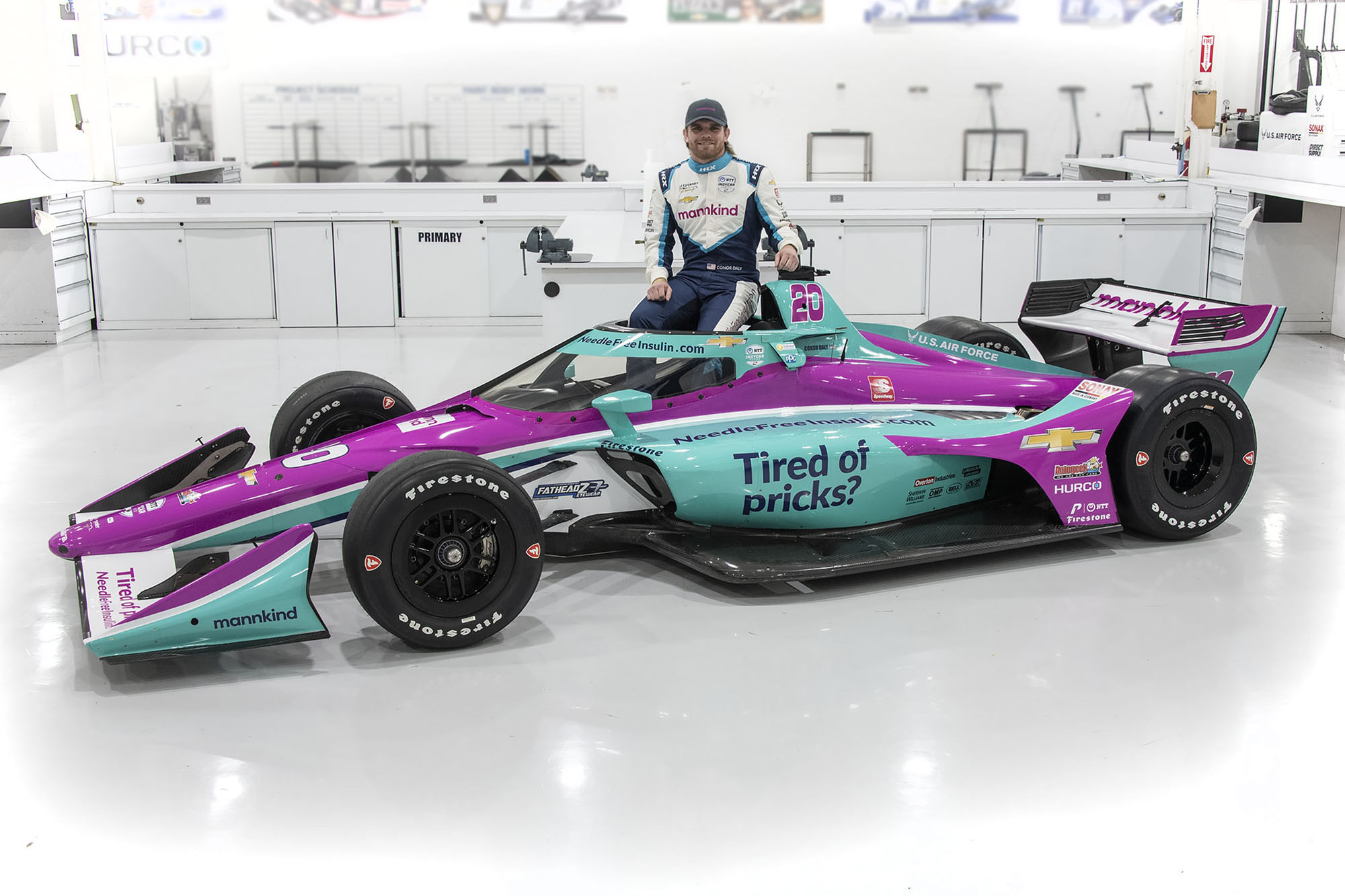 MannKind Corporation (Nasdaq: MNKD) is revved up to announce an elevated partnership for the 2021 season with NTT INDYCAR SERIES driver Conor Daly, who is living with Type 1 diabetes (T1D) and will help raise awareness about diabetes and innovative management options. MannKind will also be a primary sponsor for Ed Carpenter Racing as Daly debuts the No. 20 MannKind Chevrolet at the May 15th running of the GMR Grand Prix at Indianapolis Motor Speedway.

“MannKind first met Conor in early 2019, and his ability to rise above any challenge he’s faced really resonates with us,” said Michael Castagna, CEO of MannKind Corporation. “We are driven to find new ways to give people control of their health, and Conor exemplifies the very spirit of MannKind’s mission – living life without limits.”

Daly was first diagnosed with diabetes at the age of 14, and today is the only known U.S. professional racing driver who competes full-time while living with T1D. “I’m excited to work with MannKind again for the 2021 racing season and I look forward to sharing my T1D story through this partnership,” said Daly. “I can’t wait to get the No. 20 MannKind Chevrolet on the track this weekend.”

The No. 20 MannKind Chevrolet will feature an edgy “Tired of Pricks?” tagline –a purposeful wordplay designed to draw attention to NeedleFreeInsulin.com. To highlight the text, the car presents in a color scheme of magenta and teal which derives from MannKind’s brand palette.

“We’re thrilled to introduce this head-turning livery when Conor represents Ed Carpenter Racing this weekend at the Indianapolis Motor Speedway,” said Alejandro Galindo, Chief Commercial Officer of MannKind Corporation. “As part of an extended marketing partnership, we will work closely with Daly on a series of appearances to stress that living with diabetes should not stop you from fully living your dreams. The first event is being planned for the week of Indy 500 in late May.”

Like many professional racers, Daly started regularly competing in karting at the age of 10. Four years later, he encountered a hurdle when he found himself heading to the hospital having lost weight and possessing an insatiable thirst for water. “I ended up not racing that day, but rather had tests run to learn what was going on with me,” recalled Daly. That answer came in the form of a Type 1 diabetes diagnosis.

“It came as a surprise, but I knew that this was just another challenge life was presenting, and I wasn’t going to let it slow me down,” said Daly. True to his conviction, less than a week later he was back racing at the go-kart track and went on to take home the 2006 World Karting Association Grand Nationals title. He progressed to car racing in 2007, and has continued to thrive in the sport he loves.

After finding success in both United States and international open-wheel ladder systems, Daly made the decision to concentrate solely on American motorsports in 2015. Over the past seven years, he has competed in over 60 Indy car races. The 2021 NTT INDYCAR SERIES season is Daly’s second with ECR. He will compete for ECR in 14 of 17 events this year, driving the No. 20 Chevrolet during the road and street course events. When ECR team owner Ed Carpenter steps back into the No. 20 for the Indianapolis 500 later this month, Daly will shift over to the No. 47 U.S. Air Force Chevrolet. Known for a desire to sharpen his skills by racing in different disciplines, Daly has recently competed in USAC Midgets, Lamborghini Super Trofeo North America and NASCAR Camping World Truck Series.

About MannKind Corporation
MannKind Corporation (Nasdaq: MNKD) focuses on the development and commercialization of inhaled therapeutic products for patients with endocrine and orphan lung diseases. MannKind is currently commercializing Afrezza® (insulin human) Inhalation Powder, the Company’s first FDA-approved product and the only inhaled ultra-rapid-acting mealtime insulin in the United States, where it is available by prescription from pharmacies nationwide. Afrezza is also available by prescription in Brazil, where it is commercialized by the Company’s partner, Biomm SA. MannKind was established in 1991, and is headquartered in Westlake Village, Calif. with a manufacturing and R&D facility based in Danbury, Conn. The Company also employs field sales and medical representatives across the U.S. Please visit mannkindcorp.com to learn more.