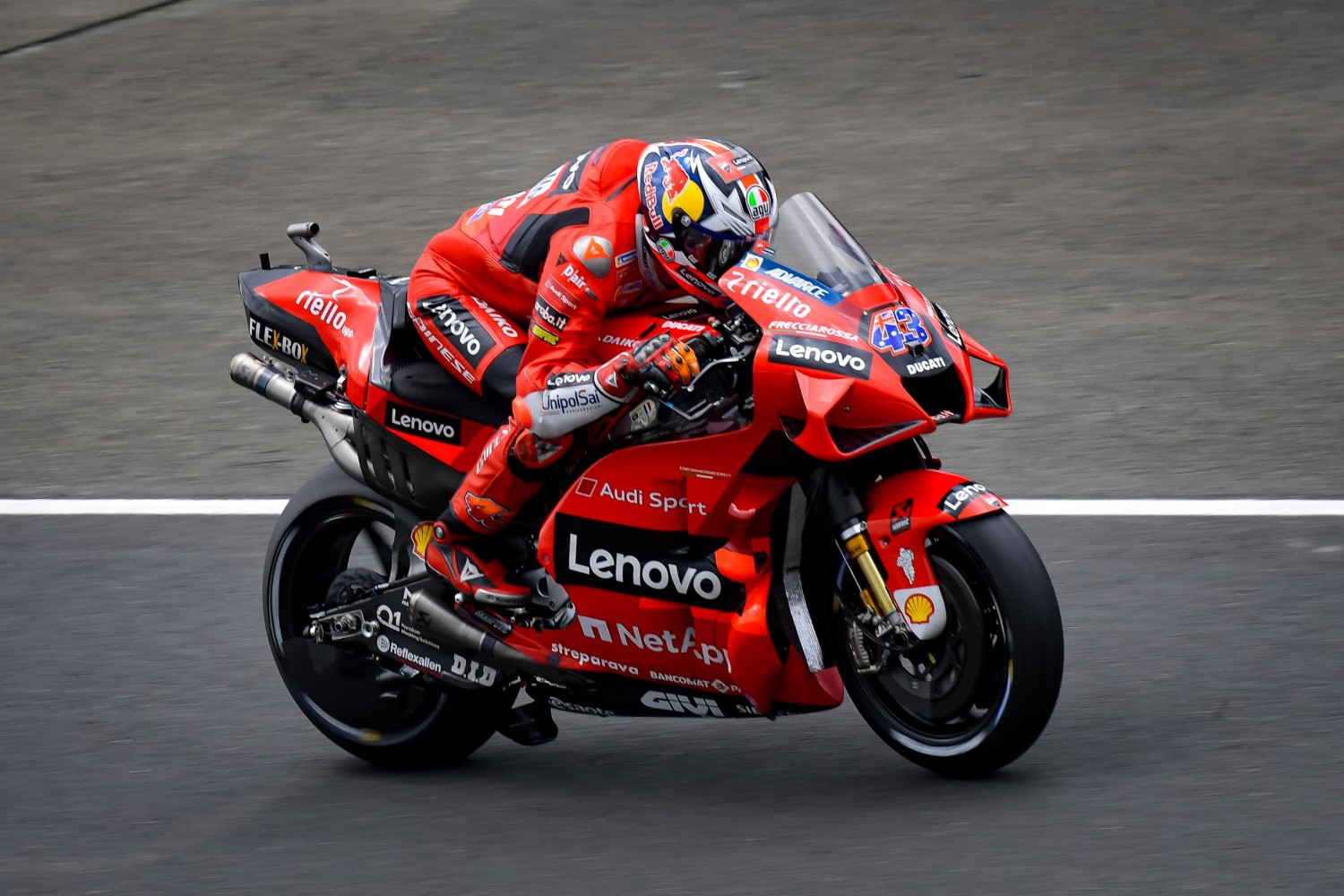 If you like your Sunday afternoons to be packed with pulsating drama and unrelenting action, then it doesn’t get any better than the 2021 SHARK Helmets Grand Prix de France.

In a rare flag-to-flag race, Jack Miller (Ducati Lenovo Team) – despite two long-lap penalties – became the first Australian since Casey Stoner in 2012 to win back-to-back races in the premier class to lead home a double French podium at Le Mans.

Ahead of lights out for the premier class race, the race was declared dry. No rain had fallen since Warm Up and after the Moto3™ and Moto2™ races, Le Mans was dry. There were some looming dark clouds in the surrounding area though and tensions were understandably palpable on the grid. The entire field had selected the soft-soft slick Michelins to begin the race on, with some forecasts suggesting there might be some rain on the way – drama was on the way.

It was dry for the time being though and as expected, Miller propelled his Ducati off the line excellently and grabbed the holeshot from third on the grid, with both Viñales and Quartararo holding firm to stay inside the top three as Marc Marquez (Repsol Honda Team) had two bites of the cherry for P4 against Takaaki Nakagami (LCR Honda Idemitsu). First Turn 7, then Turn 8.

On Lap 1, coming out of Turn 10, Pol Espargaro (Repsol Honda Team) then had a huge moment. The Spaniard stayed on but it gave Valentino Rossi (Petronas Yamaha SRT) and his teammate Franco Morbidelli a sniff. Trying to overtake at the inside of Turn 11, the door was closed on Morbidelli and the Italian ran wide, before crashing in the gravel. It caused Rossi and Pol Espargaro to lose places too, with Morbidelli able to re-join.

It was a frantic start. At the front, Miller, Quartararo and Viñales were your top three with fast-starting Alex Rins (Team Suzuki Ecstar) and Marc Marquez inside the top five, as the rain started falling. It was light to begin with and Quartararo made a phenomenal two-in-one move on Viñales and Miller at Turn 3, but the rain then started to fall a lot heavier. On Lap 5, the heavens properly opened and it was time for the field to come into pitlane for their second bikes.

Miller ran wide at Turn 11 as the riders struggled to finish the lap on the asphalt. Slick tires and heavy rain don’t mix, and the reigning World Champion Joan Mir (Team Suzuki Ecstar) found that out. Mir crashed on Lap 5 when the rain started bucketing down, as more drama followed in pitlane. Both Miller and teammate Bagnaia were handed two long-lap penalties for speeding in pitlane, Quartararo pulled into Viñales’ box slot by accident, with Marc Marquez emerging as the race leader.

Rins was second as the riders re-entered the track, but at Turn 4, the Spaniard was down. This left Marc Marquez and Quartararo clear of Miller at the front, but the eight-time World Champion was then down at the final corner. Unrelenting drama at Le Mans, Marc Marquez squandered his lead but the 93 did manage to get back on track. Now, Quartararo was the race leader again but Miller was rapidly closing in. As we know, the Australian had two long laps to take, he did so on Laps 9 and 10, before immediately closing the gap to Quartararo.

On Lap 12, Quartararo dived through the long-lap penalty lane but still came out in P2, his advantage over third place Nakagami was 12 seconds. Miller was in the groove and had a four second lead over Quartararo, as Zarco grabbed P3 from Nakagami at Turn 3. The Frenchman then started to close down compatriot Quartararo at a high rate of knots, nearly two seconds a lap, as dry lines started to appear. There was no rain falling, could we actually see the riders come into pitlane for another bike swap?

Marc Marquez crashed at Turn 6, his second of the race, and he was out on Lap 18. One thing to note: Miller and Quartararo had one soft Michelin rain tire on, Zarco was on the mediums. The mediums would last longer in these drying conditions as the wet tires started to overheat, and we saw Miller kick his right leg out on the front straight – was he signalling to get the dry bike ready? We didn’t know for now, but what we could see was Zarco reeling in Quartararo, the gap now 2.5s with seven to go.

Astonishingly, the sun was now shining in France. Zarco was once again 1.8s quicker than Quartararo, as Alex Marquez (LCR Honda Castrol) and Danilo Petrucci (Tech3 KTM Factory Racing) got the better of Nakagami for P4 and P5 respectively. Bagnaia then overtook the Japanese rider with six to go, and further up the road, Zarco blasted past Quartararo on the home straight to take P2, seven seconds behind Miller. In turn, Quartararo had 12 seconds in his pocket to Alex Marquez.

Five to go. Ducati Lenovo Team Manager Davide Tardozzi was on pit wall to tell Miller that Zarco was hunting him. The track was dry now, but with four laps to go, there wasn’t time to come into pitlane, head back out and use the slick tire advantage – not for the leaders anyway. Miller was doing a cracking effort though, his lead was staying above the five second mark as Bagnaia climbed his way to P4.

Three to go. Miller’s lead was 4.9s, Zarco was holding Quartararo at bay by nearly seven seconds, with Bagnaia eight seconds off the final podium place in fourth. Heading onto Lap 26 of 27, the gap was down to 4.3s between the leading duo, Bagnaia was cutting the gap to Quartararo by nearly two seconds a lap.

LAST LAP AT LE MANS! It was Miller’s to lose, his advantage was still above the four second mark to Zarco. Quartararo’s gap to Pecco was 3.4s, so he too should comfortably – relatively speaking – hold onto a rostrum finish. No mistakes were made from the race leading Australian and after banishing the early season demons in Jerez, Miller now sits just 16 points away from the title lead.