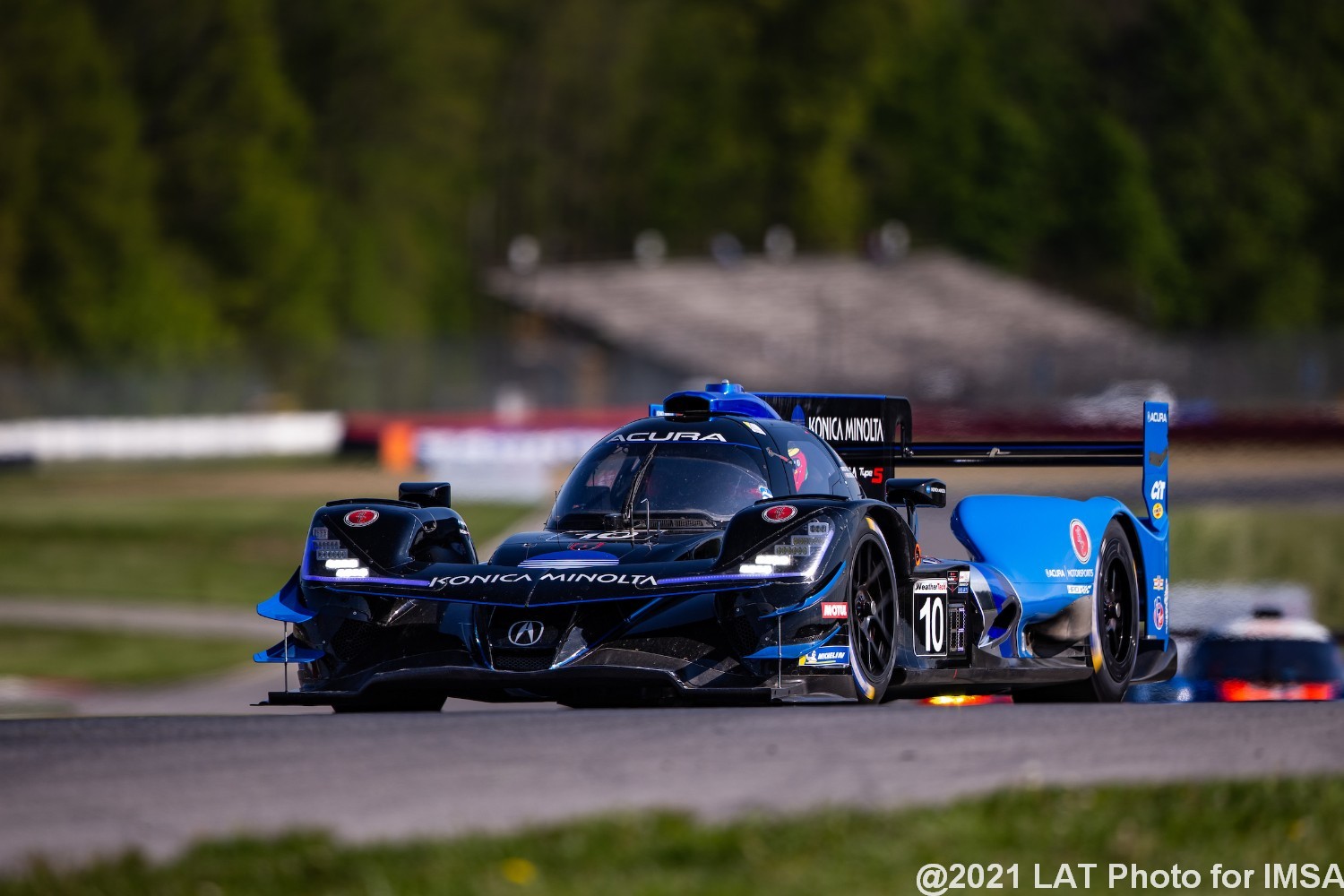 The GTLM class did not run in this event.

Taylor’s mission was to save enough gas to get the checkered flag yet use enough fuel to keep Nasr at bay.

“My fuel (warning) light came on with three laps to go, but I didn’t tell the crew,” Taylor said, after winning his second race of the 2021 IMSA WeatherTech SportsCar Championship with co-driver Filipe Albuquerque.

“It was so stressful,” he added.

Wayne Taylor Racing captured the season-opening Rolex 24 At Daytona. Mid-Ohio was the third race – and first sprint race – on the 2021 schedule.

Wayne Taylor Racing, nor Wayne Taylor the driver, had never won at the 2.258-mile road course located in the heart of the Buckeye State. Wayne, who had his face buried in his hands atop the pit box during the critical closing laps, is Ricky’s father.

The margin of victory was a scant 0.368 seconds over Nasr, whose last pass attempt on the final of 122 laps for the victory was thwarted by a slower car.

The final six minutes of the two-hour, 40-minute event were heart-stopping. Two Daytona Prototype international (DPi) machines in the lead pack surrendered their positions to get a sip of fuel on pit road to finish as Taylor and Nasr played a game of fuel cat-and-mouse for the triumph.

“It was unbelievable (watching) from the outside (of the car),” said Albuquerque, who enjoyed his first Mid-Ohio win. “Do we go for the win or secure second place? Wayne and the team committed for ‘Let’s go big. Let’s go for the win.’ It was beautiful.”

The gamble paid big dividends for Acura, which extended its Mid-Ohio winning streak to four consecutive years. Ricky Taylor has been involved in three of those wins, bringing his career IMSA total to 26.

“I’m extremely happy for Acura,” Taylor said. “Filipe did a great job. It was a fight from the green flag.”

Nasr co-drove the No. 31 Cadillac DPi with Pipo Derani for second-place honors. Rounding out the podium was the No. 55 Mazda Motorsports DPi jockeyed by Oliver Jarvis and Harry Tincknell, who dominated the first half of the race and at one point enjoyed more than a 10-second lead.

WTR is known for its endurance racing success. It has won the Rolex 24 four times in the last five years.

“That’s something this team has specialized in over the five or six years,” Taylor said. “This gives us a great momentum.”

Robinson, Fraga Close Out ‘Perfect Weekend’ for No. 74 LMP3 Team With Win

Meanwhile, the No. 74 Riley Motorsports Ligier JS P320 topped the Le Mans Prototype 3 (LMP3) class. The LMP3 winner was driven by Gar Robinson, who opened 2021 with the LMP3 win at Daytona, and Felipe Fraga, who was making his season debut. The top four LMP3 machines finished on the same lap.

“The perfect weekend,” Robinson said. “This track has always been important to me because when you did well here it sets the tone for the rest of the championship.”

“This was my first prototype race ever,” Fraga said. “This was the first time I could race in IMSA this year. I’m really happy we won the race together.”

The DPi class returns to action at the Chevrolet Detroit Grand Prix on June 11-12. The next LMP3 race weekend is the Sahlen’s Six Hours of The Glen, June 24-27 at Watkins Glen International.

Foley and Auberlen capitalized on the break and rolled to their first triumph of the IMSA WeatherTech SportsCar Championship season. It also marked the 63rd win for Auberlen – the all-time IMSA victory leader – and the fifth career win for Foley. On top of that, it put Auberlen, Foley and the No. 96 BMW atop the unofficial WeatherTech Championship season standings, seven points ahead of the No. 23 Heart of Racing Team Aston Martin Vantage GT3 shared by Roman De Angelis and Ross Gunn.

“The (No.) 14 had some pace, they were quick,” Auberlen said. “And you can never count your chickens until this race is over. Sure enough, they had a rare mechanical failure and that put us in the lead, and then (Foley) had the pace of everybody else in the field.”

Aaron Telitz, Hawksworth’s teammate and the Motul Pole Award winner in the No. 14 Lexus, took command of the GTD race from the drop of the green flag, building a lead of more than five seconds within the first half hour of the two-hour, 40-minute race. Running second, the Turner team called Foley in for an early pit stop, giving him the chance to run on fresh tires.

“Our strategist thought we could stop early, be the first car on new tires and close the gap a little bit,” Foley explained. “It worked pretty well. I had some traffic on the new tires so we couldn’t close down as much as we wanted to overtake them.”

Foley still ran second to Hawksworth when smoke began pouring from the rear of the No. 14 Lexus with 90 minutes to go on the 2.258-mile road course in Central Ohio. Hawksworth limped the car back to the pits, where it underwent lengthy repairs and eventually retired last in the 13-car GTD field.

From there, Foley sailed in the No. 96 BMW, building a 26-second lead before turning over the car to the veteran Auberlen for the final hour. Zach Veach, in the No. 12 Vasser Sullivan Lexus, was able to keep Auberlen in sight but never mounted a serious charge. The final margin of victory was 2.712 seconds to give Auberlen his record-extending 63rd career win.

“It’s very little to do with me and everything to do with the cars I drive, the teams I drive with, the co-drivers I drive with,” Auberlen said. “(Foley) gave it to me with a 26-second lead. That was evaporated really quickly when a full-course caution came out (in the final half hour) and we had to race for it. We had the (No. 12) Lexus right on our tail, but our car was so strong on new tires that I was able to gap them and then kind of run their pace.”

It was also Auberlen’s sixth trip to victory lane at Mid-Ohio.

“The car was perfect,” he said. “The reason I have so many wins here is the BMWs are so good on these crazy, twisty, handling tracks. We maybe should have had two more in the last two years but we’ve had some bad luck.”