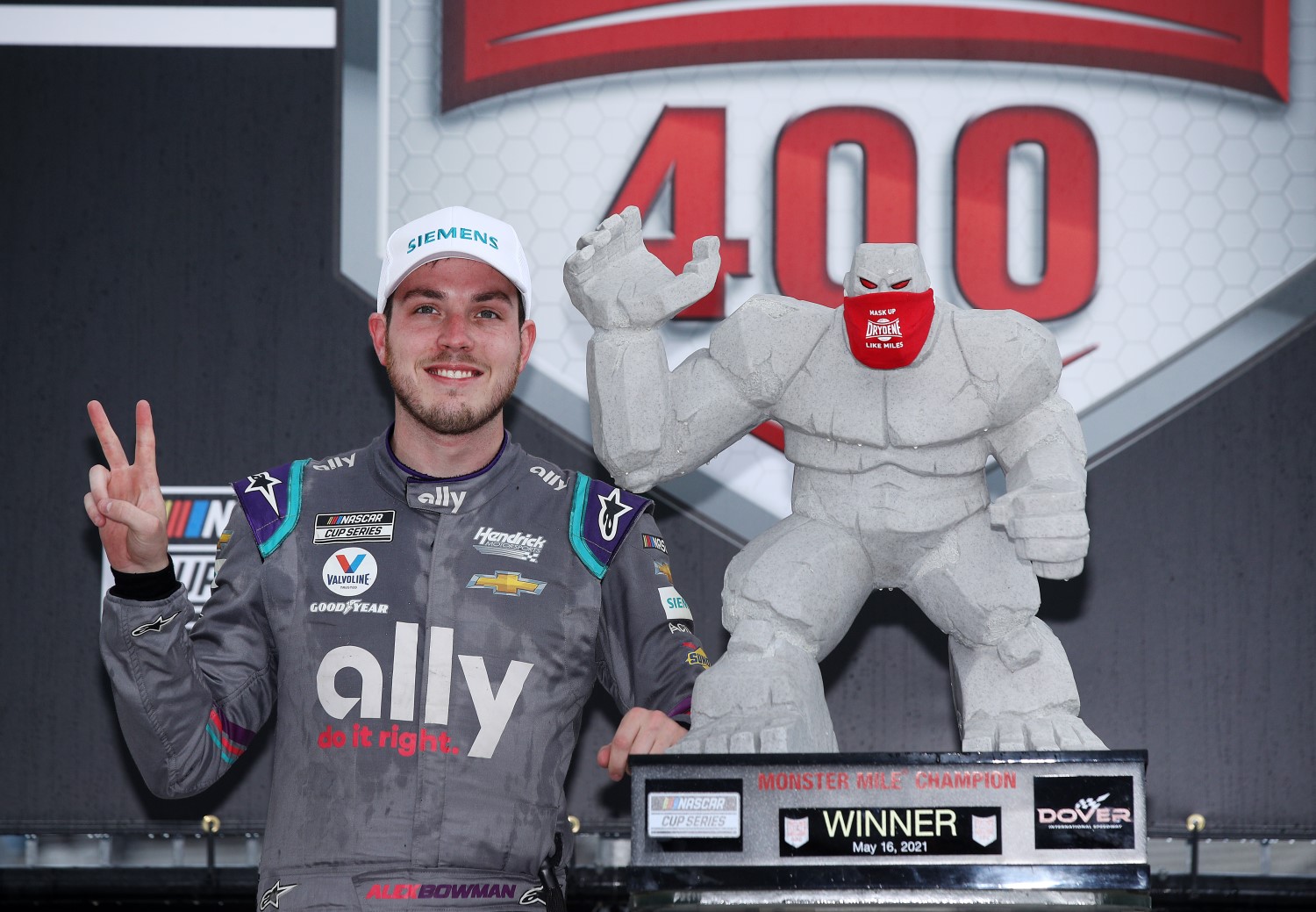 Alex Bowman won the Drydene 400 NASCAR Cup race at Dover Sunday in his #48 Hendrick Chevy by 2-s over teammate Kyle Larson who dominated the first 3/4 of the race in his #5 Hendrick Chevy, but faded to 2nd late.

No one else had a remote chance of winning, such was the Hendrick Chevy domination.

Bowman led 98 of the 400 laps that made up the Drydene 400, taking command to stay when his Hendrick Motorsports crew got him off pit road first on Lap 304. His No. 48 Chevrolet was 2.017 seconds ahead at the drop of the checkered flag. Bowman’s first win at the 1-mile Delaware track was the fourth of his Cup Series career.

It marked the first front-four sweep by the same organization since Roush Fenway Racing accomplished the feat in the 2005 Cup Series season finale at Homestead-Miami Speedway.

Larson swept both stages, recording his fifth and sixth stage victories this season. He led a race-high 263 laps, and led the same 1-2-3-4 Hendrick sweep of the running order through the bulk of the second stage into the final segment.

Pole-starter Martin Truex Jr., last week’s winner at Darlington, led 16 laps early but faded to a 19th-place finish with some slight front-end damage to his No. 19 Joe Gibbs Racing Toyota. Bowman knocked him off the lead lap with 16 laps remaining.

The 28-year-old from Tucson, Ariz., took over the iconic No. 48 Chevrolet from 11-time Dover race winner Jimmie Johnson in February. Sunday’s run gave Bowman his second victory of the young season and he became the 39th different Cup Series winner at Dover across 103 events.

“I was terrible when I came here for other teams,” Bowman said. “I texted Jimmie and asked how he approaches this place. I just stuck to that and ran the Jimmie Johnson line, tight against the black, super disciplined, super patient.

“We’ve been good here ever since. To win here with the 48 car is special but to win with tips that Jimmie gave me is pretty cool.”

Hendrick Motorsports is also just one win from tying Petty Enterprises for the all-time NASCAR Cup Series lead. Bowman’s victory was the 267th for Hendrick, one behind Petty’s 268.

“Every time you enter a race you’d love to see them go 1-2-3-4,” said team owner Rick Hendrick. “It was probably the longest last 100 laps that I’ve seen in a race. So proud of all the guys and it was a great day for the organization.

“Richard [Petty] is a good friend and he’s the king of the sport. Anytime there’s a record out there you want to break it. I would have told you it was impossible back in 1984 when we started. It’s really hard to do.”

“We know that [victory] milestone is out in front of us,” said Larson. “[Rick] mentions it almost every time we talk to him. I hope I’m the driver to do it.”

For much of Sunday’s race it appeared that Larson would be the driver who would bring home the win for Hendrick. Larson won the first two stages and led a whopping 263 laps overall, but came out of pit road second behind Bowman following a round of yellow-flag pit stops and couldn’t muscle past his teammate the rest of the way.

“I don’t know what we could have done differently after we came out second in pit road,” Larson said. “I’m not disappointed or upset about this second. I feel like there wasn’t anything else I could do.

“All of us [Hendrick] cars were pretty equal. I felt like whoever got to the lead toward the end would end up winning. We would have liked to be one spot better but what a day for Hendrick Motorsports.”

After failing two inspections before the green flag, Elliott was penalized by starting toward the back of the 37-car field. Elliott quickly made his way near the top of the chart, but was the only one of his teammates not to lead a lap.

“Everyone in our company is really motivated right now to provide fast cars,” Elliott said. “Everybody is pulling in the same direction as well as we have since I’ve been here.”

“If we don’t beat [Larson] off pit road we probably don’t beat them in the race,” Bowman said. “My pit crew, I feel like won the race. I appreciate the guys working so hard throughout the week to get better.

“It feels right to put the 48 back in Victory Lane here after so many wins before. Best race track on the schedule in my opinion.”

The NASCAR Cup Series’ next event is scheduled Sunday, May 23 at Circuit of the Americas (2:30 p.m. ET on FS1, MRN, SiriusXM NASCAR Radio), marking the sanctioning body’s first event on the 3.41-mile Austin, Texas road course.

ALEX BOWMAN WINS AT DOVER AND HE GETS HIS CREW CHIEF’S (GREG IVE) FIRST OFFICIAL VICTORY AS A CREW CHIEF AT THIS RACETRACK. ALEX, YOU JUST SAID IT’S ALL ABOUT THE PIT CREW. WHAT CAN YOU SAY ABOUT THE CHEMISTRY OF THIS TEAM RIGHT NOW AND WHAT YOU’RE ABLE TO DO?

“We won Richmond (Raceway) and then had a really rough couple of weeks there. We went to some really good racetracks for us and struggled. I told the guys last week, ‘we’re still the same team that did it at Richmond’. This is another really good place for us. I’m just so pumped for Ally. It feels right to put the 48 back in victory lane here after how many races that this car has won here.”

“Mr. H (Rick Hendrick) is here. I don’t think I’ve won with him here before, so that’s really cool. Just so proud of this pit crew. It was obviously a rough off season for us and a big void to fill. Not that we’re ever going to fill the void that Rowdy left, but Allen is doing a really good job and the whole pit crew is doing a really good job. Thanks to my spotter, Kevin Hamlin, for couching me there at the end. It was fun racing Kyle (Larson) and glad to get Hendrick Motorsports another win.”

IT LOOKED LIKE YOU WERE GOING TO BE ABLE TO GET BACK TO BATTLE FOR THE LEAD. WHAT DID YOU LACK THERE AT THE END?

“Yeah, I just felt like all of us HMS guys were pretty equal, so I felt like whoever got out to the lead was going to be hard to beat. Their team (No. 48 Chevy) just did a really good job on that pit stop and gained control of the race. I never really had a shot after that. That one restart, I got to his bumper and got him loose, but the 4 (Kevin Harvick) was coming so we just had to let each other go. Hard to be disappointed with a second, because like I said, I felt like I did everything I could. We led a lot of laps and won both Stages there, so it was good points, but we would have liked to be one spot better.”

“But all in all, a good day for our NationsGuard Chevy and what a day for Hendrick Motorsports and Chevrolet. Thanks to everyone back at the shop, the engine shop. It’s pretty amazing because I don’t know the last time Mr. H (Rick Hendrick) had all four of his cars in the top-four, but that is a pretty special day, for sure.”

“I really felt like we were pretty close, balance-wise. It was just kind of a matter of how your restart went and where you fell in line, unfortunately for us. But I’m happy for Hendrick Motorsports. I don’t know when the last time that finish has happened. It’s probably been a while for any team.”

FINISHING 1-2-3-4 FOR HENDRICK MOTORSPORTS WAS A DOMINATE DAY FOR THE ORGANIZATION.

“Yeah, that was awesome. For us to finish 1-2-3-4 is just a credit to a lot of great people at the shop, Chevrolet, Axalta, and all the people that support us to get us the resources; and then our teams, the crew chiefs, drivers and pit crews executing really good races. For us, it’s been going for a while. We’ve just got to get a little bit. It sucks to be fourth, but I think we’re close. We just have to work on some things on our car, get the right feels, but we’re getting really close. So, we keep chipping away. We’ve had two fourth-place finishes in a row. We’ll take it and move on.”

TO GET A FIRST, SECOND, THIRD, AND FOURTH PLACE FINISH TODAY, WHAT DOES THAT MEAN TO YOU IN THE LIST OF ACCOMPLISHMENTS?

“I can guarantee you this has been the most nervous I’ve been in a race. It was a great day for the organization. Alex (Bowman), congratulations to him. This is a sign of the guys working together and bringing good stuff to the track. I don’t think it’ll hit me maybe until tomorrow that we were able to finish 1-2-3-4. That’s pretty hard to do. Things can happen; pit stops, tires, anything. But that’s a first and we’ll take it. It was a great day for us.”