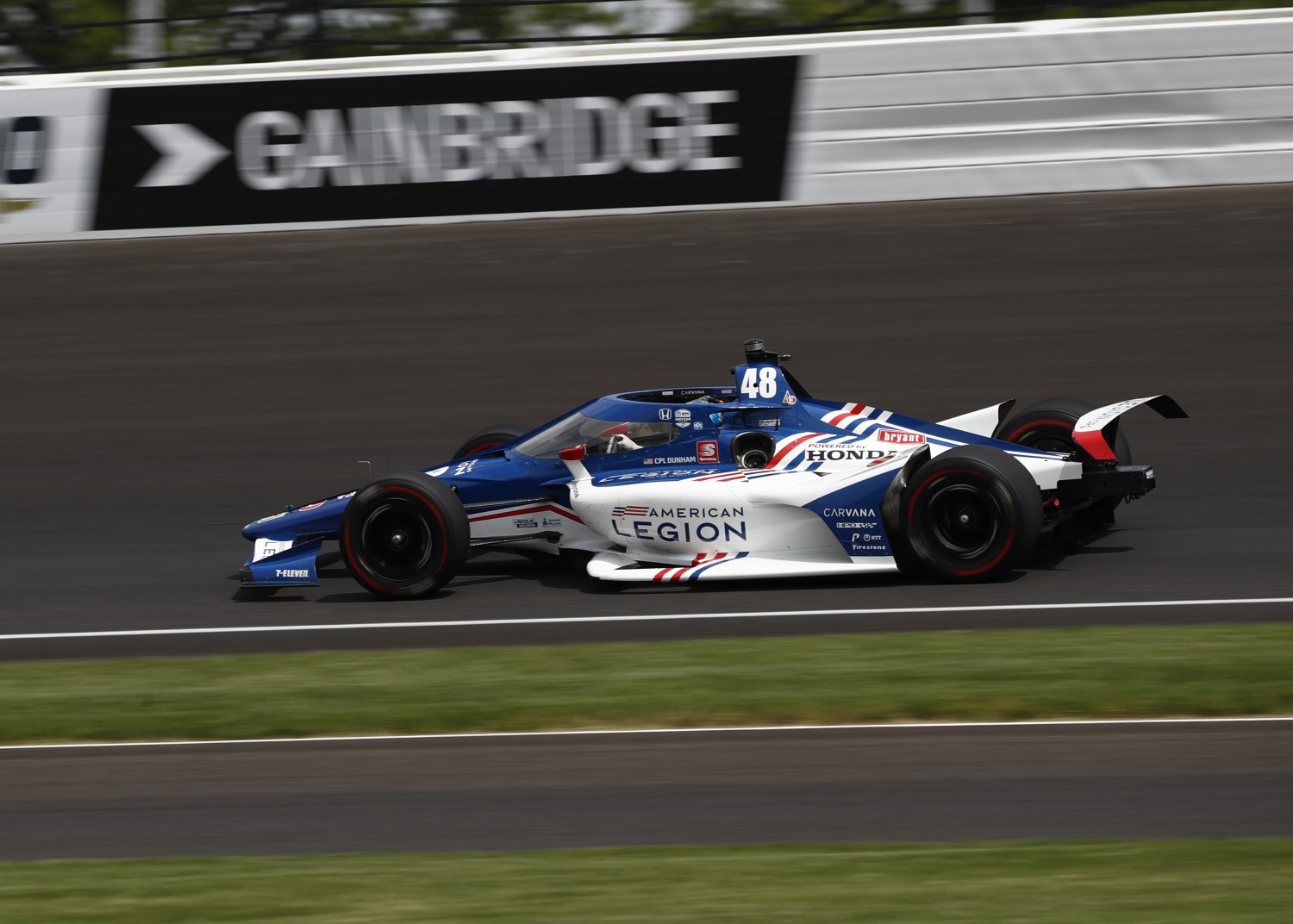 Ganassi Honda veteran Tony Kanaan put the #48 machine, normally run at the back by Jimmie Johnson, up front in Thursday practice for the Indy 500 with a speed of 225.351 mph (see 2nd table below – speeds with tow).

“It feels good,” Kanaan said. “Today has been the hottest day so far this week, so we’ve been to do a couple of things to kind of do the cookbook. You’re just trying to check the weather, what are we running in this type of weather, trying to guess when you’re going to qualify and then try to guess what’s going to happen next Sunday when we take the green flag. We’re just working on racing setup.”

However, the fastest man without a tow, which of course really matters, was Jack Harvey in the No. 60 Meyer Shank Racing Honda at 222.090 mph (see 1st table below).

Harvey got off to a quick start as the team began to test qualify simulations during the initial hours of the day. After just the second simulation Harvey brought the No. 60 AutoNation / SiriusXM Honda up to a speed of 222.090 mph which put him P1 on the speed charts for no tow times.

Harvey held that top spot through the remainder of the day.

“I thought that the first qualifying run that we did looked decent, and then it was a little bit better on the second one that we did, which was an encouraging sign,” said Harvey.

“I think the No. 60 AutoNation / SiriusXM Honda is looking pretty fast on its own. We have some work to do on our race car now, and we’ll wait and see what we can do tomorrow.”

Ferrucci was transported to IU Health Methodist Hospital in Indianapolis for further evaluation of his left foot after being involved in the first major incident of practice this week. At 4:14 p.m., Ferrucci’s No. 45 Hy-Vee Honda did a quarter-spin to the left in Turn 2 and made hard rear contact with the SAFER Barrier in Turn 2 before stopping on the back straightaway. The rear of the car suffered heavy damage.

Two-time NTT INDYCAR SERIES champion Josef Newgarden was fourth at 224.885 in the No. 2 Shell Fuel Rewards Team Penske Chevrolet. Scott Dixon, fastest in practice Wednesday, ended up fifth today at 224.666 in the No. 9 PNC Bank Grow Up Great Honda.

Teams will shift to focusing on qualifying setups Friday in preparation for the drama and speed of Saturday and Sunday.

Today’s practice opened with drama from the first lap.

Colton Herta, driving the No. 26 Gainbridge Honda, brushed the Turn 4 wall and the No. 3 Pennzoil Team Penske Chevrolet driven by Scott McLaughlin after McLaughlin and the No. 16 Rocket Pro TPO/Paretta Autosport Chevrolet driven by Simona De Silvestro slowed due to three Rahal Letterman Lanigan Racing cars running slowly in formation on the front straightaway on the first lap of the session. Per INDYCAR Rulebook Rule 9.3.1, Rahal Letterman Lanigan Racing was penalized for improper conduct, and its three cars – driven by reigning “500” winner Takuma Sato, Graham Rahal and Ferrucci – will not be allowed to participate in the first 30 minutes of practice Friday.

Herta and McLaughlin returned to the track later after Andretti Autosport and Team Penske checked their respective cars in Gasoline Alley.

“Day three is done here at the Indianapolis Motor Speedway and getting ready for Fast Friday tomorrow,” said Arrow McLaren Chevy driver Pato O’Ward. “I like the way that my racecar feels, but there’s still more to do on the qualifying car. So tomorrow will be a good teller to see where we land and where we stack up, should be good to get the extra boost. That’s always an extra bit of adventure around this place. Really happy with the No. 5 Arrow McLaren SP Chevrolet and excited to turn it up tomorrow.”

“I think we definitely found a happy car in traffic, which is good. We tried a lot of different things today. Every time you try something new and it’s not very good, you can always revert back to that base car. That’s a good position to be in. We tried our qualifying program today, and I think that’s where we have to focus right now to get it a little better for qualifying. Then we should be good.”