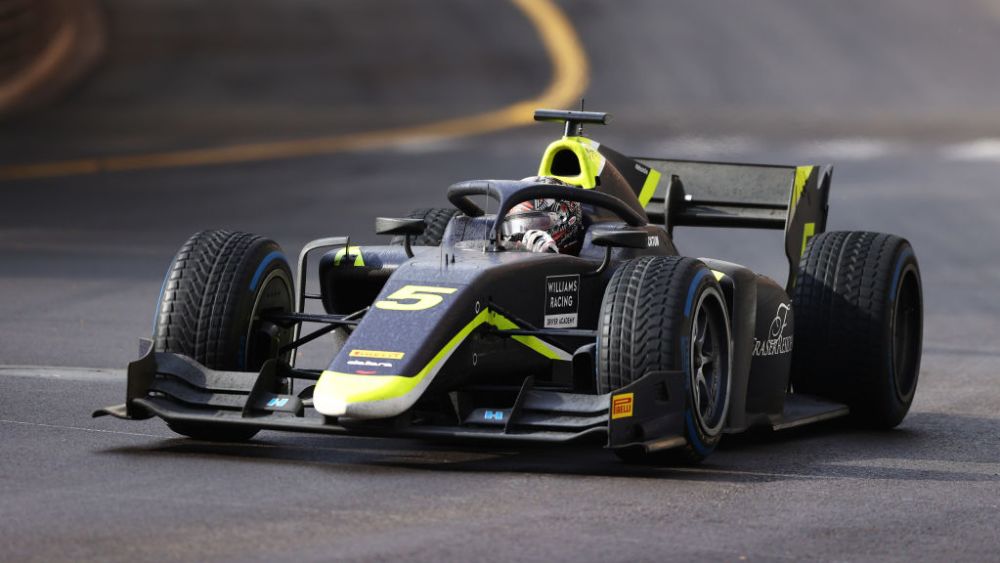 Sprint Race 2 winner Liam Lawson has been disqualified and stripped of victory for a technical non-conformity, following Saturday morning’s race in Monte Carlo. Carlin’s Dan Ticktum (shown above) has been promoted to first following Lawson’s disqualification, having finished second on track.

The drivers are required to use a defined throttle pedal progressivity map programmed in position 1 of the steering wheel throttle map rotary knob during all formation lap starts and race starts until the car speed reaches 50kph.

Following an investigation after the race, the Stewards found that Lawson used a different throttle map at the race start, a breach of Technical Regulations, Article 3.6.5.

As well as handing Ticktum his first win of the season, the disqualification also sees Oscar Piastri climb to second and promotes Jüri Vips onto the podium. Further back, Robert Shwarztman jumps to P10 and subsequently gains the two bonus points for fastest lap.

Liam Lawson kept the pressure on Championship leader Guanyu Zhou with a second win of the season in Sprint Race 2 at Monte Carlo, the Hitech Grand Prix racer recovered from a tricky start to win out over Carlin’s Dan Ticktum and PREMA Racing’s Oscar Piastri.

Jumped by Piastri off the line, Lawson marshalled the wet conditions expertly, reclaiming the lead five laps in and controlling the rest of the race.

Piastri dropped down to third behind Ticktum, with the two-time Macau Grand Prix winner utilizing his street-race experience to pick off the PREMA and hunt down the Hitech. But Lawson refused to surrender, keeping the Briton at bay during a tumultuous middle part of the race, before going on to finish 8s ahead.

A late two-and-throw with Piastri came to nothing for Vips, who crossed the chequered flag in fourth, ahead of Théo Pourchaire. Ralph Boschung managed to hold off MP Motorsport duo Richard Verschoor and Lirim Zendeli for sixth. After a one-two in Sprint Race 1, UNI-Virtuosi pair Zhou and Felipe Drugovich slumped to 16th and 15th.

There was heartbreak for reverse grid polesitter Marcus Armstrong ahead of the start. Having pulled off the move of the day in Sprint Race 1, the DAMS failed to re-join the starting grid and was forced to make his getaway from the pitlane.

Dark clouds shadowed the rain-soaked streets of Monaco on an early morning in the principality, but that didn’t stop Round 1 race winner Piastri from launching off the line on wet tyres and grabbing P1 from Lawson.

Having spent the majority of Sprint Race 1 failing to get ahead of Vips, Ticktum did what he couldn’t in 30 laps on Friday, inside of one on Saturday, springing off the line ahead of both the Hitech, and Pourchaire.

Gianluca Petecof’s sorry weekend continued, with the Campos retiring from his second successive race, having clipped the barriers on the opening lap.

Lawson had recouped after a tricky getaway and was hounding the rear of Piastri, despite a real lack of grip. After a disastrous start, worse was to come for Armstrong, who pulled over with further issues and clambered out of the car.

With the track beginning to dry, Lawson knew his opportunities were lessening and risked a brave move at Nouvelle, but Piastri just about clung on to the lead, with the pair of them both cutting the chicane.

Lawson didn’t relent, the duo continuing their scrap up the road. This time, a daring inside move at Rascasse allowed him to scamper in front, with Piastri left in the clutches of Ticktum. The Carlin was all over the back of him, but Piastri refused to hand over a second position and brushed off the challenge.

Meanwhile, Marino Sato and Christian Lundgaard became the latest casualties, with Sato losing his Trident at Turn 1, before Lundgaard locked up and ended up deep into Mirebeau.

Back to the front where Ticktum had managed to sneak ahead of Piastri out of the tunnel, edging through the tightest of gaps. The Briton was skidding all over the circuit, but still managed to close in on first, utilizing every inch of grip available to him.

Boschung was the cork in the bottle in sixth, more than 26s behind Vips, but with Roy Nissany, Verschoor, Jehan Daruvala and Zendeli all in his rear-view mirror. Their battle was brought to a halt after Nissany struck the wall at Sainte Devote, ending his afternoon, as Zendeli vaulted ahead of Daruvala.

There was more trouble further back, with Bent Viscaal clipping the back of David Beckmann and bringing out a full Safety Car. Lawson enjoyed a clean restart with just a minute left on the clock and was able to pull an 8s gap over Ticktum for his second win of the season, while Piastri held on to fourth, despite a late challenge from Vips.