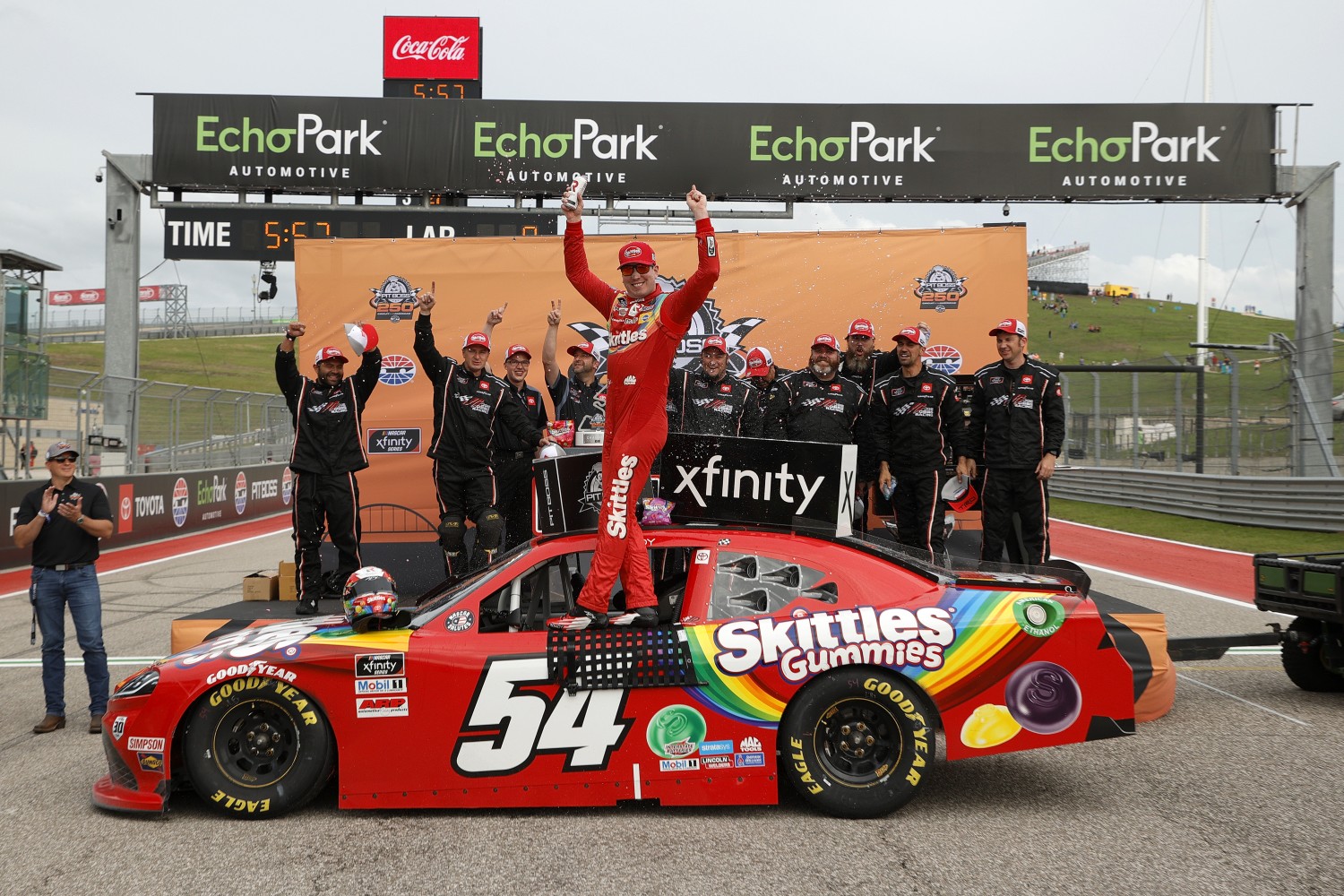 Kyle Busch essentially went to school Saturday afternoon in the NASCAR Xfinity Series to learn the Circuit of the Americas road course in preparation for Sunday’s NASCAR Cup Series race there. The result, however, was that Busch absolutely schooled the field – earning an 11-second victory in the Pit Boss 250, NASCAR’s Xfinity Series debut on the famed Austin circuit.

It marked the two-time NASCAR Cup Series champion’s record 98th win in the Xfinity Series. His No. 54 Joe Gibbs Racing Toyota led a race-best 36-of-46 laps. No other driver led more than three laps at the 3.41-mile 20-turn circuit.

“It’s really really cool to come here for the first race at a new track and to win,’’ Busch said. “Real proud of the effort.

“I think the biggest thing is just all the resources and stuff we have and being able to get laps on the track today, feel the tire, everything like that and then being able to get back out there tomorrow and do everything all over again tomorrow with the Cup car.,’’ the Las Vegas native added. “Thanks to Toyota and TRD, we’ve got some really cool tools we’ve been able to use and I feel like it was a plus for us today.’’

Allmendinger and Haley won Stage 1 and Stage 2, respectively. Championship contenders, they opted to stay on track and earn the points rather than join in Busch’s strategy of pitting just prior to the stage breaks. What he conceded in points, he made up for winning the inaugural trophy.

The only laps Busch, 36, didn’t lead were when he pitted or when he made a brief rally after stage breaks. Following the first stage break, for example, he restarted fourth and was leading the field two laps later.

“It’s shocking, Kyle Busch is actually pretty good,’’ Allmendinger said smiling. “It’s always fun to race Kyle. Did everything we could, got a stage win, got a lot of points and finished second. That was as good as we were going to do.’’

The victory marked the 17th season Busch has won an Xfinity Series race and the 27th different NASCAR track where he has hoisted a trophy.

While the NASCAR Camping World Truck Series race, held hours earlier, had some light rain and was run on rain tires, the weather had cleared nicely by the drop of the Xfinity Series green flag. The vast majority of the field opted to pit for slicks (dry tires) during the parade laps and by the race’s midpoint, it was a sunny afternoon.

Busch will have a chance to earn another COTA victory when he competes in the inaugural EchoPark Texas Grand Prix (2:30 p.m. ET, FS1, PRN, SiriusXM NASCAR Radio) tomorrow at the Austin course.

98th-career Xfinity Series win. You made history again, you win the first race at Circuit of the Americas in the Xfinity Series. How much time and effort and thought have you put in to racing at this new track?

“That’s a funny question. It’s an inside joke at JGR (Joe Gibbs Racing). I have to give a huge shoutout to all the machine guys, the CNC guys, as well as the carbon guys. They helped me be able to get comfortable in the car for this weekend and be able to come out here and run on the road course again. A little bit of 2015 started to flare up this past week, so be able to keep that under control and get out here today and have such an amazing car to drive. Thanks to all these guys, everyone at the Xfinity Series shop, all of Joe Gibbs Racing, Joe (Gibbs), Coy (Gibbs), JD (Gibbs), everybody that has made this possible over the years. It’s really, really cool to come here for the first race at a new track and win, I’m kicking myself right now because I never won at Montreal, but I won at every other road course I’ve raced at, so it’s kind of a bummer, but overall real proud of the effort. This Skittles Gummies Supra was super. It was just awesome. I did a burnout in front of our friends over there at the Skittles Bus. Appreciate all those guys being here too.”

What a long day. You started the day with Cup practice in the downpour rain, then you qualified in the rain and had a dry race here. All of that, how can it help you tomorrow in Cup?

“I think the biggest thing is all the resources and stuff we have and being able to get laps on the track today, feel the tire and everything like that. To be able to get back out there tomorrow and do everything all over again tomorrow with the Cup car, so thanks to Toyota and TRD, we have some really cool tools that we’ve been able to use, and I feel like that was a good plus for us here today and hopefully it’s a good plus for us tomorrow. There were another couple of fast guys out there that will be a force to be reckoned with tomorrow, but overall excited about today. Cool to win and let’s see what tomorrow brings.”

How good did today feel out there dominating this race?

“It felt really good. We obviously had a great piece and this Toyota Supra was awesome. Thanks to Skittles, Skittles Gummies, and Toyota, TRD and everybody at JGR (Joe Gibbs Racing), the machine shop, the carbon shop. They helped me to be comfortable in the car for this weekend so that was really good. Thanks to Chris Gayle (crew chief). It’s fun working with that guy. I love that guy and we have a lot of fun together. We have had a lot of success together so it’s nice