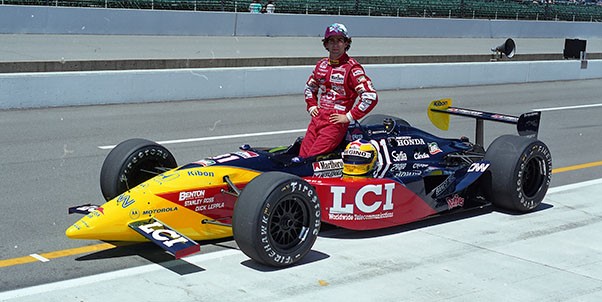 After a race-winning career in his native Brazil and later Europe, Andre Ribeiro da Cunha came to North America with Tasman Motorsports to compete in the 1994 Indy Lights Championship, winning four times and finishing second in the drivers’ championship.

Team and driver moved up to Championship Auto Racing Teams [CART] competition in 1995 where, as a rookie, he recorded Honda’s first Indy car victory on August 20, winning from the pole in his Tasman Motorsports Reynard Honda.

Two more wins – in his native Brazil at Rio de Janeiro and at Michigan International Speedway – followed in 1996.  Ribeiro retired from competition following the 1998 season went on to run a network of automobile dealerships in his native Brazil in partnership with racing magnate Roger Penske.

Ribeiro’s four seasons in CART were highlighted by a 1995 victory from the pole at New Hampshire Motor Speedway, which was Honda’s first win in the sport. That was the first of his three victories for with Tasman Motorsports, the team that brought him to the U.S. through Indy Lights.

He won four races as an Indy Lights rookie in 1994, finishing second in the standings to teammate Steve Robertson and one position ahead of Greg Moore, who went on to win five CART races.

Ribeiro started 12th and finished 18th in the 1995 Indianapolis 500 in the No. 31 LCI International Reynard/Honda in his only start in “The Greatest Spectacle in Racing.”

In 1996, Ribeiro scored a popular victory in CART’s first race in Brazil. Ribeiro held off Al Unser Jr. by two seconds to capture the second of his three career victories. He added another victory later that season at Michigan International Speedway, edging Bryan Herta. That was Ribeiro’s best season, finishing 11th in the standings after leading 166 laps.

Ribeiro joined Roger Penske’s organization for CART’s 1998 season, which was his last in the sport after 68 career starts. He retired at the end of the year at age 32.

Ribeiro spent the next chapter of his life leading a group of auto dealerships owned by Penske in Sao Paulo.