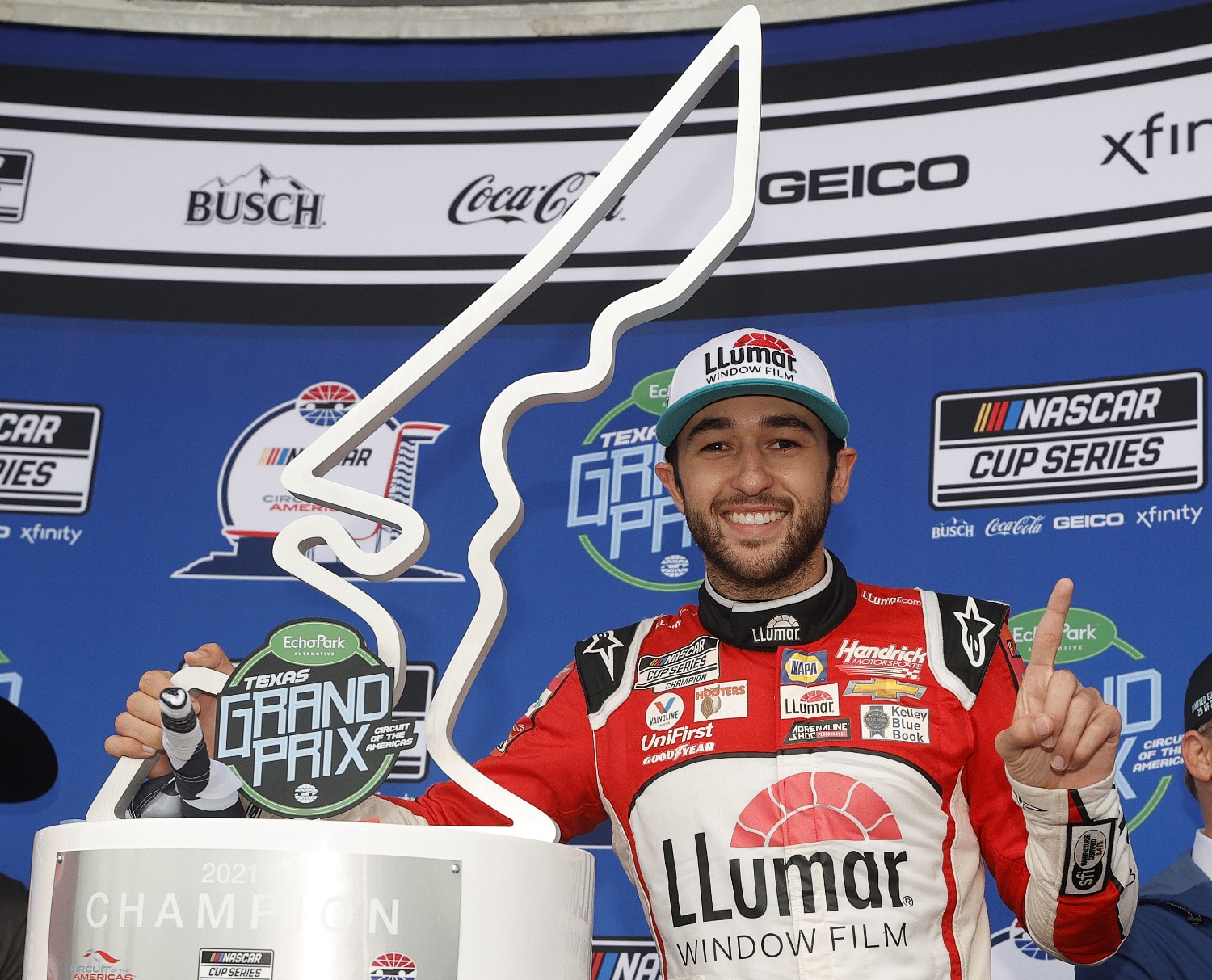 You can’t call a Chase Elliott victory on a road course “unexpected,” but little else was predictable in the inaugural NASCAR Cup Series race at the Circuit of the Americas road course in Austin, Texas.

After all, Elliott came to COTA having won five of the previous 10 road races, and on Sunday the EchoPark Texas Grand Prix became No. 6 after NASCAR called the race 14 laps short of the scheduled finish because of excessive standing water on the track and potential danger to the drivers.

In addition to reaching this 800th triumph for the brand, Elliott brought the Camaro ZL1 1LE to Victory Lane for the 14th time since becoming Chevrolet’s flagship NCS race vehicle in 2020, and the fifth time in the 2021 NCS season.

“I couldn’t be more excited,” said Elliott. “I’ve never won a rain race before, so it’s kind of cool. And I’m just super proud of our team for just continuing to fight. We started the day, and we weren’t very good. I just kept pushing myself and we kept making some good changes throughout the day and got to where I thought we were on pace with those guys there at the end. So, I’m really proud of that. It’s not the greatest thing ever, for it to rain and to have a rain race win, if it’s your first one; but I think it’s okay if it’s down the road, so I’m pretty excited about that. I’m looking forward to next week and trying to keep it rolling.”

Due to inclement weather, the EchoPark Texas Grand Prix was called with 14 laps to go. Elliott’s triumph marks the first appearance for the NCS in its debut at COTA, a 3.4-mile, 20-turn, counterclockwise track circuit track with multiple elevation changes that that flow with the hilly landscape.

This win was Elliott’s 12th NCS career victory, his sixth road course win, and first of the 2021 NCS season. It also celebrated the 268th victory for Rick Hendrick and Hendrick Motorsports.

“So proud of Chase Elliott and his No. 9 Camaro team for persevering all race long and handling such challenging conditions to deliver a big win at the first race at Circuit of the Americas,” said Jim Campbell, vice president of Performance and Motorsports. “Chase’s first win of the season is extra special as it was Hendrick Motorsports 268th Cup win and Chevrolet’s 800th Cup win.”

“Yeah, man, I couldn’t be more excited,” said Elliott, the reigning Cup champion, who is tied for third with Rusty Wallace in all-time road course wins. “I’ve never won a rain race before, so it’s kind of cool. Just super-proud of our team for continuing to fight.

“We kind of started the day, and we weren’t very good. I just kept pushing myself and (we) made some good changes throughout the day and got to where I think we were on pace with those guys there at the end.”

A week after Hendrick drivers finished 1-2-3-4 at Dover, the organization grabbed the top two spots at the 3.41-mile, 20-turn road course, with Kyle Larson running second when NASCAR red-flagged the event after 54 of a planned 68 and then called it when the rain failed to abate.

“Yeah, it was tough, but it was fun,” said Logano.

“I had a blast. It was mentally draining, mentally very, very challenging out there because the track changed so much from lap to lap.  One lap it’s pouring.  The next lap it’s raining a little bit and then you’re hydroplaning everywhere and you’re really slipping and sliding, and tires meant something, which, I think, was surprising to everybody — that tires meant something.

For all but the first few laps, drivers raced in the rain until it became too heavy to continue.

With challenging visibility on the long, high-speed backstretch, a crash on Lap 25 brought the race to a halt for the first time. Martin Truex Jr. slammed into the back of the Ford of Michael McDowell, who had slowed in traffic.

In a chain reaction, the Ford of Cole Custer plowed into the back of Truex’s damaged Toyota, lifting the rear of the Camry off the pavement. Custer then hit the Armco barrier to the inside of the straight. Custer hastily exited the crippled Mustang, which had lit on fire.

NASCAR red-flagged the race and sent track dryers out to remove water from the racing surface.

“I’m all good,” Custer said after a trip to the infield care center. “It didn’t hurt as much as I thought it was going to be, but it’s just that you can’t see anything. It’s pretty bad. I mean, you can’t see a foot in front of your car.

“I was just rolling down the backstretch. You can’t see anything. I’m just so frustrated about having our day end like this. It killed the car, and it’s just really frustrating.”

The cars of Custer and Truex were damaged too severely to continue. Before that wreck occurred, Kevin Harvick and Bubba Wallace already had been eliminated in a similar low-visibility crash on Lap 19.

Even before the race went green, teams were faced with a choice. With rain seemingly imminent but the track dry to start the event, would a change to slick tires be in order, or would crew chiefs opt to stay on rain tires, which NASCAR had mandated for the initial roll off pit road.

Most of the field opted for slicks, and Austin Cindric streaked to an early lead. But the rain intensified, and those who had taken the green on dry tires soon came to pit road for rain tires.

Earlier in the day, in only the second Cup qualifying session of the 2021 season, Reddick won the pole in dry conditions with a lap at 92.363 mph. The pole was the first for a Richard Childress Racing driver on a road course since Dale Earnhardt was top qualifier for the last time in his career in August 1996 at Watkins Glen.

“Road racing has been a big challenge in my career, and I’ve worked really hard to get better at it,” said Reddick, who qualified fifth in the rain and finished eighth in Saturday’s Xfinity Series race. “Running yesterday’s NXS race helped me with some valuable seat time, so it’s great to see all that hard work come together with a pole.”

Martin Truex, Jr. and Cole Custer were involved in an accident on lap 26 of the very wet Echopark Texas Grand Prix NASCAR Cup Series race at Circuit of the America Sunday. Note the big crowd compared to what IndyCar was able to draw at COTA.

Blinded by the rain spray thrown up by NASCAR’s rain tires, Truex ran into the rear of Michael McDowell.  Custer did not see Truex slow and drove under the #19.  Custer’s car caught fire, but he was able to get out quickly.

Both drivers were evaluated and released from the infield care center.

A huge and frightening hit for Cole Custer and Martin Truex Jr. at Circuit of The Americas. pic.twitter.com/dGmCoXQPx6

Next up for the Cup Series is the Coca-Cola 600 at Charlotte Motor Speedway, May 30 at 6 p.m. ET on FOX, PRN, SiriusXM NASCAR Radio.

IT DOESN’T SEEM TO MATTER THE CONDITIONS. IF IT’S A ROAD COURSE, YOU’RE GOING TO FIND YOUR WAY UP FRONT. THIS IS YOUR SIXTH ROAD COURSE RACE WIN AND 12th CAREER VICTORY

“I couldn’t be more excited. I’ve never won a rain race before, so it’s kind of cool. And I’m just super proud of our team for just continuing to fight. We started the day, and we weren’t very good. I just kept pushing myself and we kept making some good changes throughout the day and got to where I thought we were on pace with those guys there at the end. So, I’m really proud of that. It’s not the greatest thing ever, for it to rain and to have a rain race win, if it’s your first one; but I think it’s okay if it’s down the road, so I’m pretty excited about that. I’m looking forward to next week and trying to keep it rolling.”

AT THE END OF THE RACE, YOU WERE A COUPLE OF LAPS SHORT ON FUEL. ALAN (GUSTAFSON, CREW CHIEF) TOLD YOU TO START PUSHING. YOU PICKED UP THE PACE INCREDIBLY AT THE END. YOU WERE TWO SECONDS QUICKER THAN ANYBODY IN THE FIELD. WHAT DID YOU DO DIFFERENT?

“I just kept pushing myself harder and harder. Some areas on the track though were getting, actually, really treacherous, I felt like. The back straightaway was puddling up and starting to hydroplane and do some weird stuff. My only option was to just kind of send it through those spots and just hope for the best.

“Thanks to all the fans for hanging in there today. It’s great to have Llumar on the car this week and get this win together. I know everybody is used to seeing us in our NAPA colors, but it’s good to have them on board.

“I’m just proud of our team. To come here and fight, it’s not the ideal way to win, but we’ll definitely take it and move on down the road.”