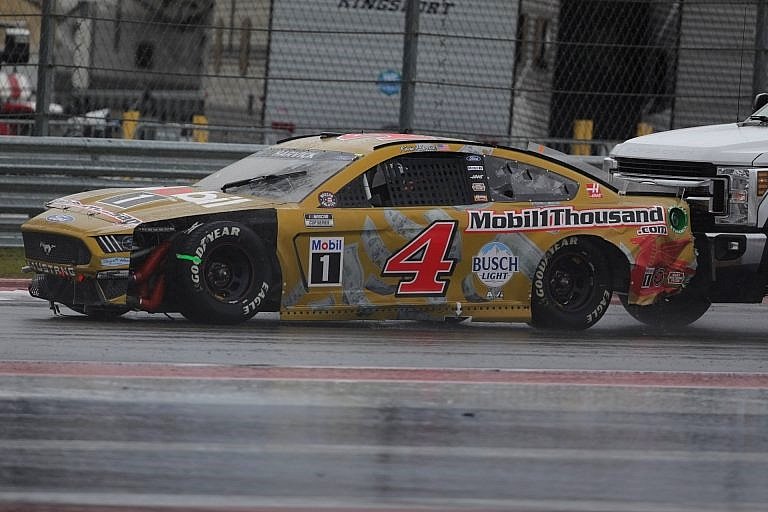 Taxicabs without windshield wipers are not designed to race in the rain.

Kevin Harvick was one of multiple drivers who saw their afternoons ended by wrecks caused by visibility issues. On Lap 19, the Stewart-Haas Racing driver was hit by The Bubba, who couldn’t see because of water spraying from the cars ahead. Of course if there is something to hit, Wallace finds a way.

Harvick tore into NASCAR after wrecking out at COTA.

#NASCAR … I talked to @KevinHarvick and he was not happy about racing in the rain, saying “I’ve never felt more unsafe in my whole racing career. Period.” pic.twitter.com/3DdDKwe1No

“It’s the most unsafe thing I’ve ever done in a race car by a lot,” he told NBC Sports’ Dustin Long. “You can’t see anything down the straightaways. These cars were not built to run in the rain, and when you can’t see, my spotter said, ‘Check up, check up,’ because he thought he saw two cars wrecking.

“I let off and the guy behind me (Bubba Wallace of course)  hit me wide-open because he never saw me. It’s unbelievable that we’re out there doing what we’re doing because we’re in race cars that aren’t made to do this, and if you can’t see going down the straightaway it’s absolutely not safe, not even close.”

Harvick added: “We don’t have any business being out in the rain, period. All I can say is this is the worst decision that we’ve ever made in our sport that I’ve been a part of, and I’ve never felt more unsafe in my whole racing career, period.”