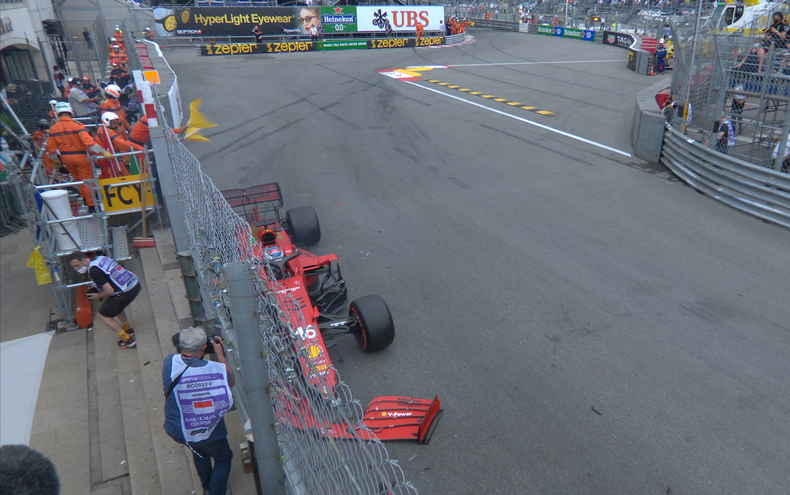 Contrary to what American-hater Guenther Steiner thinks (this is the guy who has made Haas the worse team in F1), Fernando Alonso believes it is “unfair” that Formula 1 drivers who caused red flags by crashing in qualifying for the Azerbaijan Grand Prix are allowed to keep their grid positions, and he is in favor of the IndyCar rule whereby if you cause a red flag and screw others, you get a return screw by losing your two fastest laps.

Speaking to Sky F1, Alonso said: “It was messy, it was [Baku Qualifying] difficult to get into the rhythm, into the pace, but it was the same for everybody.

“[It is] unfair probably that the people that crashed, they repair the car, and they start in that position tomorrow.

“All the other cars, we are in parc ferme until tomorrow, we cannot touch the car, so why they can change all the parts that they caused the red flag?

“Maybe one day we are in that position, and we take advantage of the rule.

“I think the people need to calm down a little and drive 98% in a street circuit because if you crash, and you start last in the race, maybe you don’t drive over your possibilities.

“And I think today with so many people driving over the possibilities of their car or their abilities.”

Haas F1 boss Guenther Steiner is not in favor of F1 implementing the IndyCar red-flag rule.

“Like everything when everything arises, the FIA, Formula 1 and the teams look at everything and consider it on its merits,” said Michael Masi in Monaco.

“I know the IndyCar rule, which is also a rule in a number of other FIA international series and domestic championships around the world,” he added. “We’ll look at it, and, together with all of the key stakeholders, determine if it’s suitable or not.”

Referring specifically to Leclerc’s crash, Steiner said: “Having looked it, looked at the data and also listening to the team communication, I don’t think any driver would go out there to severely damage their car to that degree, in any circumstance, because of the consequences that may arise out of that.”

“I wouldn’t be a big fan of that one if it was to be implemented,” admits the Italian. “It obviously came up because Charles Leclerc hit the wall pretty hard on his last run in qualifying, but obviously it was not intentional.

“If it had been, the FIA would have seen that,” he continued, “it’s easy to see that on the data if somebody’s done something intentionally.

“I don’t think there’s a need to start this discussion. What if instead of a red flag there was only a yellow flag and some people slow down and not some others – do we still cancel the lap of the guy who brought the yellow out?

“It’s worked for a long time as is, and it’s happened once, especially in Monaco where it’s very easy to crash by the way, I don’t think it’s a problem we need to fix at the moment.

“It’s part of the risk you take though if you go out late in qualifying. If people had gone out earlier maybe it wouldn’t have happened. I think if somebody does something on purpose there should be consequences, but this wasn’t the case in Monaco.”

After setting a time that was good enough for provisional pole, Leclerc crashed into a barrier at the swimming pool complex on his second fast lap, bringing the top-10 shoot-out to a halt with 18 seconds remaining and depriving Red Bull’s Max Verstappen and Valtteri Bottas in his Mercedes from beating his time, which they likely would have.

In IndyCar, article 8.3.4 of its regulations state: “If a car causes a red condition in any segment, the car’s best two timed laps of the segment shall be disallowed, the car may not continue in the segment, and the car shall not advance to the next segment.”

Asked whether it is something F1 and the FIA would look into, Masi replied: “Like everything when anything arises, the FIA, Formula 1 and the teams look at everything and consider it on its merits.

“Yes, I know the IndyCar rule, which is also a rule in a number of other FIA international series and domestic championships around the world.

“We will look at it and, together with all of the key stakeholders, determine if it is suitable or not.”

Mercedes team principal Toto Wolff has backed Masi, suggesting a driver could not then be questioned whether his actions were deliberate or not.

Wolff said: “It is an intelligent rule that would avoid confusion.

“By any means, I don’t think that Charles put it in the wall because there is just too much at stake.

“But it would be a nice little incentive to make sure anything underhanded is then out of the question. There would be no doubt.”