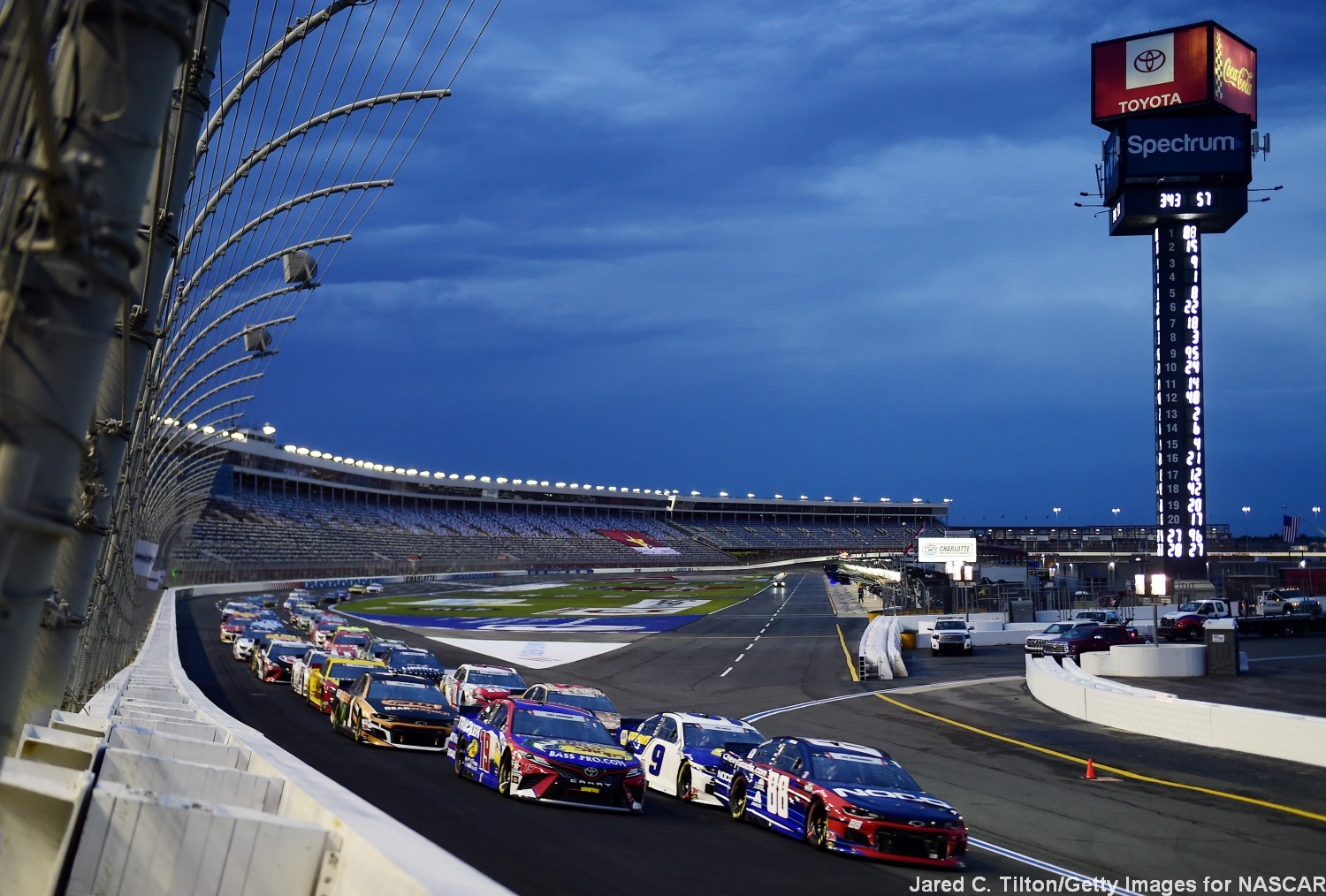 The magic number is 269, and four drivers have a vested interest in getting there.

Hendrick Motorsports’ next NASCAR Cup Series victory will be the organization’s 269th and will break a tie with Petty Enterprises for most all-time—a tie that has existed for one week, since reigning series champion Chase Elliott picked up the 268th win for HMS last Sunday at Circuit of The Americas.

Hendrick’s first opportunity for the record triumph comes Sunday in the Coca-Cola 600 at Charlotte Motor Speedway (6 p.m. ET on FOX, PRN and SiriusXM NASCAR Radio). Elliott is the most recent winner at the 1.5-mile intermediate track, having taken the checkered flag on May 28, 2020, four days after the running of the 2020 Coke 600.

With 93 and 83 victories, respectively, Jeff Gordon and Jimmie Johnson have accounted for the lion’s share of Hendrick wins. With 12 triumphs, Elliott is tied for third on that list with two-time series champion Terry Labonte.

Kyle Larson, who joined the Hendrick roster this year, added one victory to the total in the fourth race of the season, at Las Vegas Motor Speedway. The driver of the No. 5 Chevrolet would like nothing better than to make his second win for the organization the record-breaker for car owner Rick Hendrick.

“I know it’s going to be special to Mr. Hendrick, because every time I talk to him, he brings it up,” Larson said. “Now that we’re really close to it, we can all taste it. One more win and he breaks it, and I hope I’m the guy that can do it.

“I’m happy that I’m one of the drivers that contributed to his record. He’s had a long career of success and a lot of great drivers, and it’s just an amazing accomplishment.”

Teammate William Byron, a Charlotte native, is equally ardent in his desire to achieve the milestone win in NASCAR’s longest race. Byron picked up his second career victory at Homestead-Miami Speedway in March. That victory started a streak of 11 straight to-10 finishes that ended last Sunday with an 11th-place run at COTA.

“It would mean a lot to be the driver who breaks the all-time Cup Series win record for Hendrick Motorsports, especially if it happened at Charlotte,” Byron said. “Not only is this race huge for me, being my hometown, but it’s really where I became a fan of Hendrick Motorsports.

“I used to watch Jeff and Jimmie be so successful at Charlotte. To then be able to get win No. 269 would be historic for everyone involved, but just a whole extra meaning at my hometown track. Charlotte is what gave me my love of racing and Hendrick Motorsports.”

Alex Bowman, one of two multiple winners in the series this year, is the fourth Hendrick driver trying to achieve the record, but all four will have to contend with defending race winner Brad Keselowski and three-time Charlotte winners Kevin Harvick and Martin Truex Jr.

Truex claimed all three of his Charlotte victories after Harvick got his most recent in his 2014 championship season. In 2016, Truex set a new standard for domination, leading 588 of 600 miles—a NASCAR record for a Cup race—in winning the Coke 600 for the first time.

Note: Busch pole qualifying for the Coke 600 is scheduled for Saturday at 11:05 a.m. Because of the coronavirus pandemic, qualifying has been eliminated at most tracks this season, with starting order set by metrics.

In a feast-or-famine year in the NASCAR Xfinity Series, Brandon Jones finds himself squarely on the bubble where the series Playoffs are concerned.

Jones currently is 12th in the standings, the final Playoff-eligible position, 26 points ahead of another Brandon—Brandon Brown.

Driving the No. 19 Joe Gibbs Racing Toyota, Jones has posted five top-five results this season, including a runner-up finish at Homestead-Miami Speedway and a pair of thirds at Las Vegas and Darlington.

On the flip side, the 24-year-old from Atlanta has suffered five finishes of 33rd or worse—all DNFs for crashes, and most not of his own making.

Accordingly, Jones has put in concentrated work in preparation for Saturday’s Alsco Uniforms 300 at Charlotte Motor Speedway (1 p.m. ET on FS1, PRN and SiriusXM NASCAR Radio). The extra effort is justified. In seven starts at the 1.5-mile oval, Jones has two top 10s and an average finish of 14.9.

“I have spent a lot of time studying, practicing in the simulator, and looking at our notebook,” Jones said. “We will be able to have some track time with practice starting on Friday and qualifying Saturday morning before the race.

“I feel confident we will be well-prepared. Charlotte is a fun but challenging mile-and-a-half. We will be searching for grip and moving all over to establish our preferred line throughout the day. For fans, this makes a great race to watch.”

In the past, full-time NASCAR Cup Series drivers have dominated this race, but Tyler Reddick is the only Cup regular entered in Saturday’s event. In 2019, Reddick won the race on the way to a second straight Xfinity Series title.

In last Saturday’s NASCAR Camping World Truck Series race at Circuit of The Americas, John Hunter Nemechek ran 12th, his only finish outside the top 10 this season save for a crash-induced 39th on the Bristol Motor Speedway dirt track.

The 12th-place result at Austin didn’t prevent Nemechek from retaining the series lead by 31 points over second-place Ben Rhodes, but the driver of the No. 4 Kyle Busch Motorsports Toyota would like to build on that advantage in Friday night’s North Carolina Education Lottery 200 at Charlotte Motor Speedway (8:30 p.m. ET on FS1, MRN and SiriusXM NASCAR Radio).

“It’s very exciting to get back to a mile-and-a-half,” said Nemechek, an eight-time winner in the series and a two-time victor this year. “I feel like our 1.5-mile and short-track programs have been really good. I feel like our whole program in general has been good.

“We kind of missed it on one of the road courses and the dirt stuff. I feel like we can kind of throw those away now and focus on the future. We have some really good race tracks coming up as well. Some more mile-and-a-halves, short tracks and another dirt and road course race that I really enjoy—but first things first. I have to go take care of business at Charlotte.”

Standing in Nemechek’s way likely will be ThorSport Racing, which is fielding five entries in the race. ThorSport’s Matt Crafton (two victories) and Johnny Sauter (one victory) are the only two former Charlotte winners in the field for Friday night’s race.

The ThorSport armada also includes Rhodes, a two-time winner this season, as well as part-timers Christian Eckes and Ty Majeski.

What To Watch For: There have been 75 total NASCAR Xfinity Series races at Charlotte Motor Speedway with the inaugural race on May 29, 1982. Harry Gant won the first Xfinity race at Charlotte from the pole position in his own Pontiac. … The 75 Xfinity Series races have produced 48 different pole winners and 36 different race winners. … Joe Nemechek holds the record for the most races run at Charlotte Motor Speedway with 38. … Carl Edwards and Matt Kenseth are tied for the most pole awards with four each. … Kyle Busch holds the record for the most wins (9), most top fives (19), most top 10s (22), most lead lap finishes (22) and most laps led (1,475). … The youngest pole winner was Chase Elliott in 2014 at 18 years, 10 month and 12 days. The oldest pole winner was Harry Gant in 1988 at 48 years, 8 months, 28 days. … The youngest race winner was Kyle Busch in 2004 at 19 years, 0 months and 27 days and the oldest winner was Harry Gant, once again, in 1991 at 51 years, 8 months and 25 days. … There have only been 12 races won from the pole or first starting position, most recently in 2018 by Brad Keselowski. … NASCAR Hall of Famer Mark Martin holds the race record from 1996 at 155.799 mph and the qualifying record is held by Jimmie Johnson in 2005 at 187.735 mph. … Alex Bowman got his first Xfinity Series win at Charlotte in 2017 and Justin Allgaier made his first career start at this track in 2008.