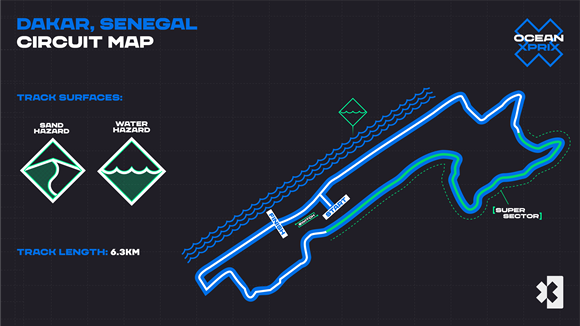 This weekend (29-30 May) Extreme E, the electric off-road racing series will host its second X Prix – the Ocean X Prix – in Lac Rose, Dakar, Senegal. Championship drivers and course advisors Timo Schieder and Jutta Kleinschmidt have been at the West African coastline developing the course ahead of the driving action commencing on Friday (28 May) with Free Practice sessions.

Teams will once again face a mostly sandy terrain, though a very different challenge and location to the deserts of Saudi Arabia. Here, the race will take to the existing tracks surrounding the lake, named after, and renowned for its striking pink colour, caused by algae that thrives within its highly-saline waters.

The Ocean X Prix starts on the beach, running alongside the Atlantic Ocean which hugs the West African coastline. Drivers will be tempted to look left at the stunning waves breaking on the beach alongside them, but this fast section will demand their attention before they turn inland and onto a more technical part of the course, in amongst the backyard of the dunes.

Obstacles will include a myriad of short, sharp elevation and directional changes as the drivers navigate their way through the tight and twisty inland sector, a world apart from the long, sweeping, full throttle sections of the AlUla desert. There will be less elevation changes than those experienced in Saudi Arabia, more like four to five metres across a series of dunes, but with more short drops and sharp rises.

In the middle sector, the route crosses close to the main paddock area and heads to the other side of the course where the sand becomes softer and will include more small dips and drops before drivers then enter back out onto the stunning beach, running alongside the picturesque turquoise sea, which will present some spectacular images of the Ocean X Prix.

Timo Scheider, Extreme E Championship Driver said: “After Saudi Arabia, which was a pretty quick course, the aim was to have a more technical layout with more overtaking possibilities and average to low speed areas, and this is what we have achieved.”

“We have some tricky areas, so for sure you have to manage your speed and we still have areas where you have to pay attention to, because if you’re too quick on some stages, you can damage your car, spin or even roll.”

Jutta Kleinschmidt, fellow Extreme E Championship Driver said: “So we love it, it’s very technical and completely different to what we faced in Saudi Arabia. It’s also slower but gives more options for overtaking as there are many racing lines, which will make the Final very interesting. I expect to see closer racing and more overtakes.

All-new for the Ocean X Prix is the Super Sector – the middle section of the course. This new element of the sporting format gives drivers the opportunity to earn five points for their team by being the fastest driver in that sector over the weekend. In a slight change to Saudi Arabia, the Final will also feature four-cars.

This beach and the community of Lac Rose faces a sad plastic pollution issue, which will be clear and unavoidable to see as teams race, though will really give the opportunity to demonstrate the impact we as humans have on our planet.

The Ocean X Prix is available to watch via a number of global broadcasters including Fox Sports in the USA, ITV, Sky Sports, BBC and BT Sport in the UK,  Teledeporte in Spain, Proseiben MAXX in Germany, Mediaset in Italy as well as Eurosport across most European Markets and SuperSport in Africa. A full list of broadcasters outlining what will be aired and when it’s available can be found here.