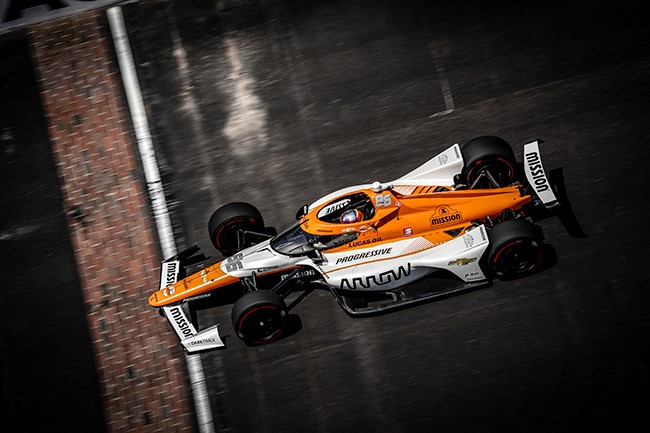 Juan Pablo Montoya will be joined by Progressive Insurance, as he competes in the 105th Running of the Indianapolis 500, going for his third win in the historic race on Sunday, May 30 at 11:00 a.m. live on NBC. Progressive will be featured on Montoya’s No. 86 Arrow McLaren SP Chevrolet, firesuit and helmet at the Indy 500 as part of the partnership.

“I’m delighted to partner with Progressive Insurance for the 105th Running of the Indianapolis 500,” Juan Pablo Montoya said. “It’s an honor to have the support of one of America’s biggest brands for the country’s greatest race.”

15 years after his last race for McLaren in Formula 1, Juan Pablo Montoya returns to the team in 2021, this time with Arrow McLaren SP.  Montoya is looking to win his third Indy 500, joining a small group of drivers to successfully do so. Juan Pablo, who raced for McLaren in F1 in 2005-2006 and won three races with the team, will pilot Arrow McLaren SP’s third car for the the greatest spectacle in racing. The Colombian driver’s resume includes championships in CART and IMSA, with wins in the NTT INDYCAR Series, Formula One and NASCAR.

“We’re thrilled to be teaming up with Juan Pablo Montoya at the Indy 500,” said Jay VanAntwerp, Media Business Leader at Progressive. “The Indy 500 is one of racing’s premier events and we’re excited to be part of it by supporting one of motorsport’s most accomplished drivers. We look forward to seeing Juan Pablo in action on race day, and wish him the best of luck as he competes for victory at Indianapolis Motor Speedway and a historic third Indy 500 win.”

Montoya will join Arrow McLaren SP drivers Pato O’Ward and Felix Rosenqvist to complete AMSP’s lineup for the historic race. Tune in live on NBC at 11:00 a.m. ET on May 30 and follow along all week long at @ArrowMcLarenSP on Twitter, Instagram and Facebook.