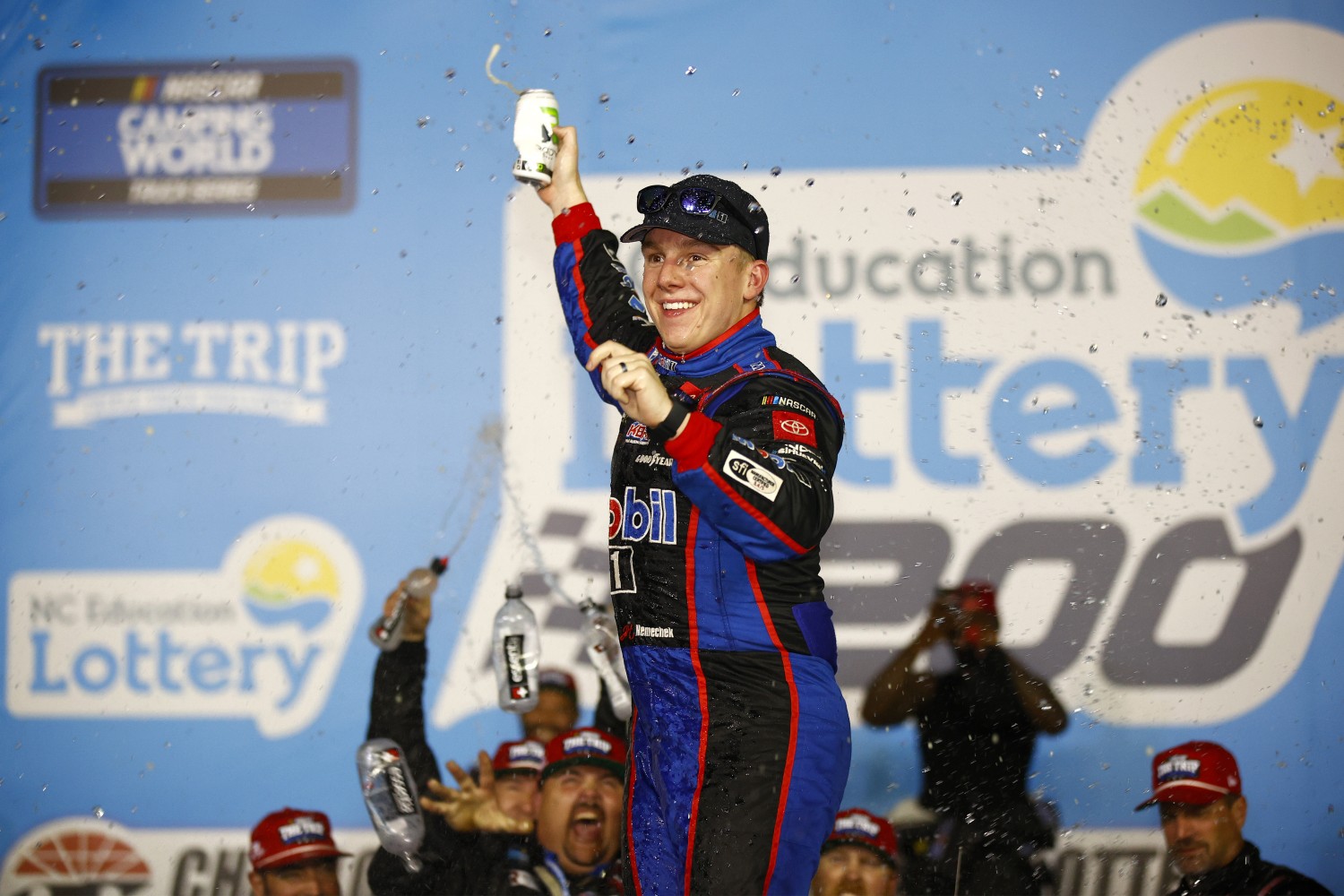 Nemechek held off Sunoco rookie Carson Hocevar over a closing 10-lap green-flag run after a violent crash at the entrance to the tri-oval stripped the body off Johnny Sauter’s No. 13 Toyota and slowed the race for nine caution laps.

The victory was Nemechek’s first at Charlotte and the ninth of his career. It came after the driver of the No. 4 KBM Toyota clipped the wall early in Friday’s practice and ran just 10 circuits in the session.

“Hats off to all my guys, (crew chief) Eric Phillips , all my guys, everyone who works on this thing—everyone at KBM, the chassis shop, the fab shop… (owner) Kyle (Busch) for this opportunity,” said Nemechek, who beat a fast-closing Hocevar to the finish line by .419 seconds. “I’m so blessed to be in this spot.

“Hopefully, we can have some fun and celebrate tonight.”

Nemechek can celebrate his organization’s dominance of the intermediate speedways. With his earlier victory at Las Vegas and Busch’s wins at Atlanta and Kansas, Kyle Busch Motorsports has swept all four 1.5-milers so far this season.

Nemechek also collected the last of three $50,000 Triple Truck Challenge bonuses, awarded to the winners of the designated races. He also extended his series lead to 44 points over second-place Ben Rhodes.

For his part, Hocevar apologized to his Niece Motorsports team for the inexperience that prevented him from running down Nemechek at the end.

“I’ve never been in that position too many times, but I let it slip away,” said Hocevar, who nevertheless posted a career-best finish. “We’re chipping away at it.”

Nemechek had a comfortable lead with 19 laps left when the No. 14 truck of Trey Hutchens III slowed to a crawl out of Turn 4 on Lap 115 of 134. Drew Dollar took evasive action, but Sauter, screened from a view of Hutchens’ Chevrolet by Dollar’s truck, plowed into the stalled vehicle and destroyed both trucks.

Debris from the wreck knocked the roof camera on Nemechek’s truck out of commission.

Reigning series champion Sheldon Creed handily won Stage 1 but was eliminated in a three-wide wreck with Gilliland and Chase Purdy in Turn 4 on Lap 55.

Zane Smith took the green/checkered flag at the end of Stage 2, but a penalty for a crewman over the wall too soon sent him to the back for a Lap 69 restart and ruined his winning chances.

Next up for the NASCAR Camping World Truck Series is the SpeedyCash.com 220 at Texas Motor Speedway on June 12, 2021.

Started with damage on your track in practice, and you came back and won tonight.
“You (Regan Smith) came and saw me earlier, and I told you we had a fast truck. I think we only ran 10 laps in practice, so hats off to all my guys. Eric Phillips (crew chief), all of my guys that work on this thing, everyone at KBM (Kyle Busch Motorsports), the chassis shop, the fab shop, just everyone and all of their effort. Mobil 1, TRD, Toyota, Kyle (Busch, team owner) for this opportunity. Just so thankful, so blessed to be in this spot. How about this crowd? It’s awesome to have all of you back.”

With the Triple Truck Challenge, you get an extra 50k in your pocket.

“I honestly forgot about that. Thank you to Womply, Camping World, Marcus Lemonis, everyone that makes this series happen. It’s one of the greatest series – the NASCAR Camping World Truck Series. Awesome. Aspen (daughter) is asleep at home, but Taylor (wife) is here, so hopefully we can have some fun tonight and celebrate.”

What does it mean to overcome the practice incident and make it to victory lane?

“I completed two laps and wrecked on lap three. Huge shoutout to all my guys – Eric Phillips (crew chief) and all our guys here and back at the shop. The pit crew pretty much won the race tonight I feel like on pit road. We were able to jump some guys there after the first stage. It was so hard to pass. It was amazing. Eric did a great job making adjustments all night and I was telling him what we needed. This was our baby truck, this one has won three races for me this year and sadly it’s going to have to get fixed with that crazy crash. Just huge shoutout to everyone that made this possible – Kyle (Busch, team owner), thank you for the opportunity. Jack (Irving, TRD), Tyler (Gibbs, TRD), David Wilson (president, TRD) and everyone at Toyota and TRD for all their help, Mobil 1 as well. My wife’s here so we’re going to celebrate. Sadly, baby is back home sleeping, but she will have a trophy in the morning.”

Did you notice any difference in the handling after sustaining the damage from the accident?

“That might be a speed secret, I don’t know.

How important is it to recover with this win after the 12th place run last weekend?

“We’re #Here4Wins and we’ve been using that hashtag since I announced I was coming to KBM (Kyle Busch Motorsports) last year and it’s a dominant team, dominant truck every single week. We’re going to have weeks where we’re off and we’ll struggle, but we’ll keep getting through it. I didn’t lose confidence in Eric (Phillips, crew chief) and he didn’t lose confidence in me. It’s just one bad race. You have to move on from it and look, we’re in victory lane here.”