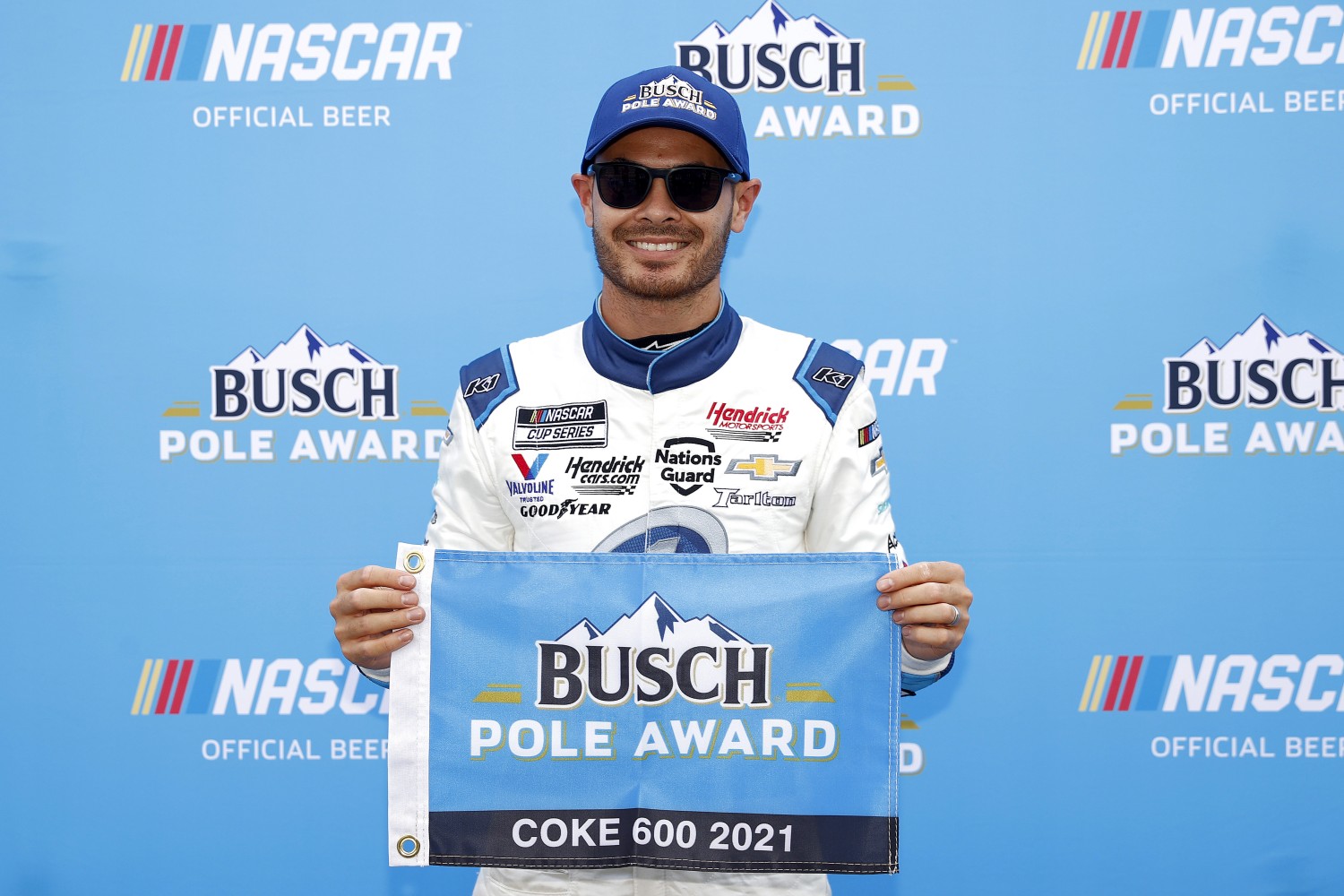 Behind the wheel of his No. 5 MetroTech Camaro ZL1 1LE, Kyle Larson topped the leaderboard in qualifying and will lead the field to the green in the NASCAR Cup Series’ (NCS) 62nd Annual Coca-Cola 600. The Hendrick Motorsports driver turned a lap of 180.282 mph/29.953 seconds to capture his first pole at Charlotte Motor Speedway, his ninth-career pole in 238 starts in NASCAR’s premier series.

The bowtie brand’s speed prevailed in qualifying with Chevrolet taking eight of the top-10 starting spots for the annual Memorial Day weekend event. Accompanying Larson on the front row is Ricky Stenhouse Jr., who clocked-in a lap of 29.960/180.240 mph to make it a Chevrolet front-row sweep.

NINTH-CAREER POLE FOR KYLE LARSON. WELL DONE, YOUNG MAN. DID YOU FEEL LIKE IT WAS A POLE-PRODUCING RUN?

“It felt really balanced. A lot of times if that’s the case, you would think it might be slow. I wasn’t sure. I honestly didn’t even know what the No. 9 (Chase Elliott) ran for a lap. It was cool when they said I was P-1. Awesome to put our No. 5 MetroTech Camaro ZL1 1LE on the front row. Really cool for Chevrolet, too. There’s a lot of Chevy’s towards the front of the field in qualifying, so that’s nice.”

“A long race tomorrow – we’ll see what we can do. I’ve never been that great in the 600, but Hendrick Motorsports has awesome equipment. I’m excited about it. Thank you to everyone at Hendrick Motorsports, the engine shop, Chevrolet, Mr. H (Rick Hendrick). This is pretty cool to get a pole when we don’t get to qualify much this year.”

CONGRATULATIONS ON WINNING THE POLE FOR THE COCA-COLA 600. BEFORE WE GO TO QUESTIONS, GIVE US AN OVERVIEW OF YOUR QUALIFYING LAP

“Yeah, it was a good one. I felt like I had more grip taking off through Turns 3 and 4 coming to the green than I did the day before. So that helped my confidence a little bit throughout the lap because I was watching and people were having to lift a little bit, especially in 3 and 4. But I felt good grip coming to the green, so I knew I’d be able to hold it wide open, no problem in turns 1 and 2. And then in 3 and 4 it was definitely easier than it was yesterday. So, it was good to get the pole. I didn’t really honestly expect to, just because Cliff (Daniels, crew chief) wasn’t too optimistic about it before we went out there. But I think my car just had enough grip and that just kind of helped me get the pole rather than super trimmed out.”

HOW WAS IT GETTING TO BRIEF WITH THE TEAM AFTER PRACTICE YESTERDAY?

“Yeah, it was good. It was nice to get to listen to them talk about how their cars were handling, especially because it sounded like my three teammates had a different balance on their cars than I did. The areas where I felt like I was struggling with my balance, they were struggling with theirs also but in a different way. It was nice to kind of listen to everybody talk and go through what changes they made on their cars and things like that. We’re four really young guys and it’s a cool dynamic, definitely, to sit in the lounge and just go over things.”

“It sounded like our teammates were a little more trimmed out than we were. We thought they would have just more raw speed. So that’s why we didn’t think we would probably get the pole. But once I was out there, and I felt like I had more grip than I did yesterday, I thought well, if I can keep ti a little straighter than I was yesterday and hold it wide open a little easier, maybe I’ll have a shot at least for the front row. But yeah, it’s sometimes good to exceed expectations.”

CHARLOTTE ISN’T MAYBE YOUR BEST TRACK. BUT DO YOU FEEL LIKE MAYBE THAT COULD CHANGE THIS YEAR?

“Yeah, I hope so. You’re right. Charlotte is definitely probably my worst 1.5-mile track, I feel like, in my past. But now that I’m with Hendrick Motorsports and they were really fast here last year and should have won the 600, and I think Chase (Elliott) won the next race. They led a bunch of laps. And they’ve had a long history of success here. I know their notebook is strong, and I expect that we can be really good all night long tomorrow.”

DID IT TAKE YOU MANY YEARS TO GET ADJUSTED TO A 600 MILE RACE WITH ALL YOUR BACKGROUND BEING 30, 40, AND 50-LAP FEATURES?

“Not really because even a 100-mile race was a lot longer. Getting used to the K&N Series was difficult, coming from Sprint Cars. Not really, but I don’t know. It’s just a long race. I think what I had to get used to was not looking at the scoreboard and stuff under cautions and looking at what lap we were on and being super disappointed that had a long time left to go. So, my history now at the 600 is I just don’t ask what lap we’re on. I don’t look at the scoreboard. I just try to not disappoint myself when I look up there because it is such a long race. It’s just a tough event because Charlotte changes a lot, the track does, with grip. Especially starting out during the day and going into the night, it usually goes through a big transition. Maybe it won’t go through quite as much just because we’ll have cooler temperatures tomorrow and maybe that transition won’t be as bit. But it’s tough, for sure. It’s not like way tougher than a 500-mile race.”

DO YOU TRY TO EAT ANYTHING DURING THE RACE THROUGH YOUR HELMET?

“I’ve only ever eaten a few snacks like a long time ago, like energy gummies and stuff. But that was only a few races and, I didn’t really feel much from it. So, I just try and stay hydrated like throughout today and then tomorrow and go to the bathroom a lot before the race because it’s a long time.”

YESTERDAY YOU WERE SAYING YOU WEREN’T A BIG FAN OF PRACTICE AND QUALIFYING, BUT HERE YOU ARE. DOES THAT CHANGE YOUR VIEW?

“Yeah, I think if we were struggling this year I would want as much practice as we could get. But with us being as fast as we’ve been, I feel like it’s more opportunity for others to get better and potentially for us to get worse. We could also get better, but I think we’ve got more to lose than other people with practice. That’s why I enjoy the schedule being how it is now, and we don’t get much practice throughout this year. I think going to a new track like we will, at Nashville, in a couple of weeks, having practice there will be nice because we don’t have much data for that place. I’ve only tested there. I’ve never raced. And the last time I tested there was probably 2013. So just getting familiar with that track will be good. But coming to a place like this, where we’ve got laps and stuff, I would rather not practice. I think it just shows with our results yesterday and today, our team is just really strong and really fast right now.”

YOUR LAP TIME WAS MORE THAN A HALF-SECOND SLOWER THAN RILEY HERBST, WHO WON THE XFINITY POLE. IS THAT OKAY? OR DO YOU BELIEVE THE TOP-TIER CARS SHOULD BE FASTER THAN THE SECOND-TIER CARS?

“Well second place was like four-tenths off of him. So, he was really fast. I don’t know. I don’t really know how to answer that question. I think NASCAR’s goal with this package was to kind of slow things down and keep the pack closer together. I think you guys will see in the race later on today it’ll get more strung out and it will look like a typical 1.5-mile, if you want to call it, Cup Series race from a few years ago. Where, tomorrow, with a lot higher downforce, we will be packed-up and it will probably look more exciting. I don’t know. I’m a fan of high-horsepower, low-downforce stuff, but this is an entertainment sport and I think there are a lot of time where, with this package, we produce some really exciting racing.”

HOW CONFIDENT ARE YOU GOING INTO TOMORROW?

“It definitely helps confidence. I feel like we were pretty fast in race trim yesterday and now getting the pole and starting up front is going to be really important. It looked like a pretty tough track to pass on last year. And too, with an added Stage, there’s more opportunity to gain points and gain another Playoff point for the end of the season. So, starting from the front is definitely important. I hope we can have a great day and tomorrow night and keep up with the race track and how it’s changing and lead the whole race is my goal.”

IN THAT SMALL OF A MARGIN, CAN YOU FEEL WHERE IT COULD HAVE BEEN BETTER AT ANY POINT?

“No doubt. The guys gave me a great No. 47 Cottonelle/Kroger Camaro ZL1 1LE. I felt like I got to the green really good and through (turns) one and two. I knew down the back straightaway; it was all going to be up to (turns) three and four. I got a little bit tight down in three and four and it just scrubbed a little too much speed.”

“All-in-all, I’m really happy with it. It felt really good in race trim and looking forward to a long race. Starting on the front row with my buddy (Kyle Larson). I wish we could have got it, but really happy with our performance.”

“Really proud of our No. 9 NAPA Auto Parts team for continuing to push forward. We had a nice win last week, which is always good. I feel like we’ve been in a good place really the last two or three weeks before that. I think we’re going to be plenty good enough for 600-miles and a good pit selection, which is important. Looking forward to it.”

YOU ENDED UP FOURTH – GOOD STARTING SPOT. HOW WOULD YOU EVALUATE YOUR QUALIFYING RUN?

“Yeah, I thought honestly we did everything we would hope we would do. To start in the top-four is great pit selection. The No. 24 Liberty University Camaro ZL1 1LE has been really fast all weekend. It’s nice to have a weekend to practice and qualify. It’s kind of cool – working with my new crew chief, Rudy (Fugle), this is kind of our first true practice session with a normal style of race track, so looking forward to that. I felt like our race car drove really well in race trim by the end of practice. I feel like we’ll have a shot to win.”