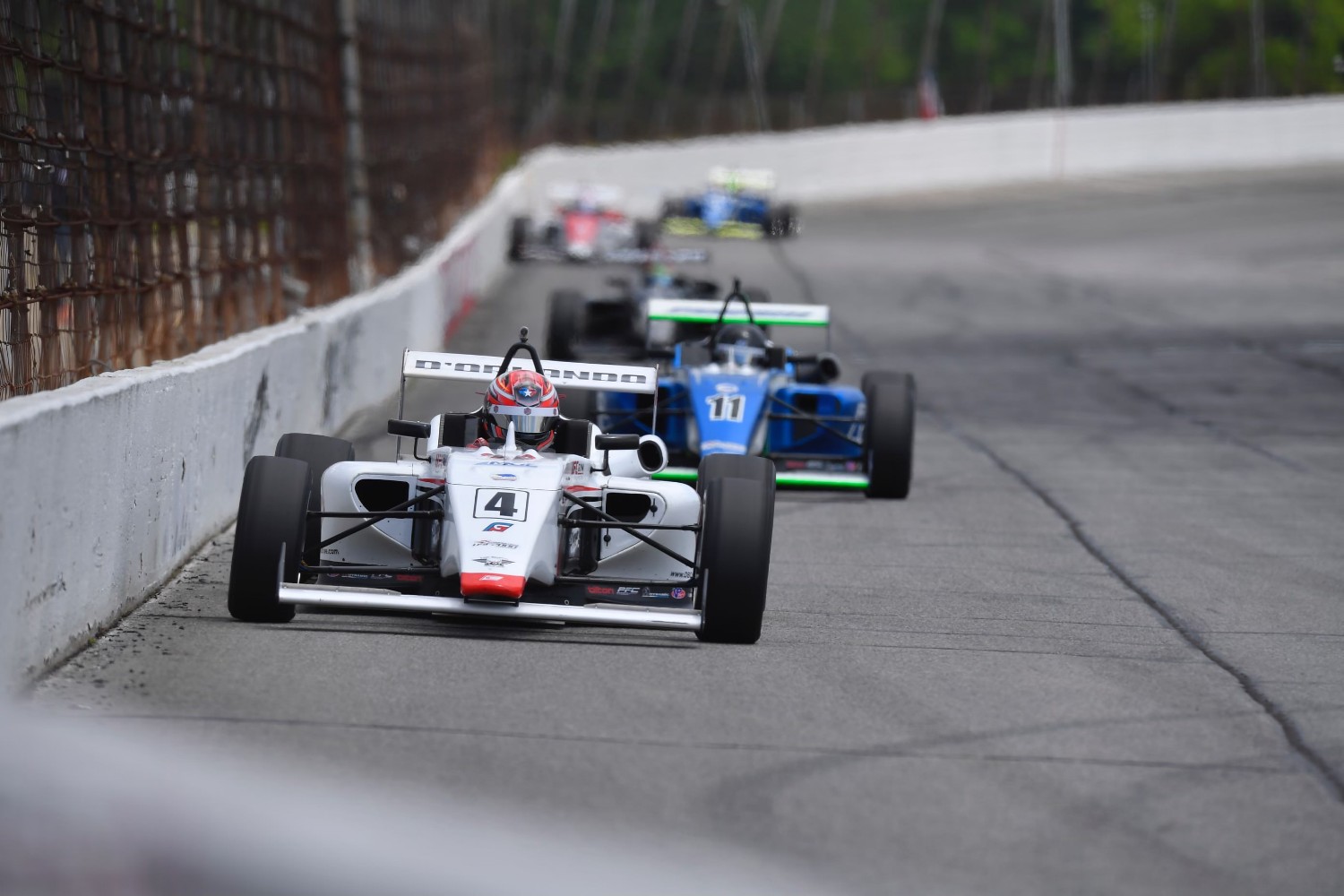 Michael d’Orlando produced an oval track clinic in today’s Cooper Tires Freedom 75. The youngster from Hartsdale, N.Y., took advantage of his first-ever pole position in the Cooper Tires USF2000 Championship’s only left-turn-only race of the season to lead throughout a hard-fought, all-green 75-lap contest at Lucas Oil Raceway for the Cape Motorsports team. But he had to work extremely hard for his laurels as DEForce Racing’s Prescott Campbell, from Newport Beach, Calif., pushed him every inch of the way.

Rookie Jace Denmark, from Scottsdale, Ariz., also made a huge impression with a strong run to third place for Pabst Racing.

After a relatively disappointing start to the season, d’Orlando marked himself as a true title contender by posting two almost identical laps during qualifying on Thursday to claim his first Cooper Tires Pole Award. Inclement weather on Friday meant he had to wait rather longer than originally anticipated to defend his hard-earned advantage in the race, but d’Orlando quickly settled into a solid pace at the front of the intensely competitive 24-car field.

Campbell, who actually recorded a slightly faster lap than d’Orlando in qualifying but couldn’t quite match the pole-sitter’s consistency, displayed the same trait in today’s race. He set the fastest lap of the race on the third trip around LOR’s demanding, high-banked oval and on several occasions managed to inch his way alongside his rival – or even fractionally ahead – as they battled for the top position. But each time d’Orlando was able to fend off the challenge, clinging doggedly to the preferred higher groove which made it just a tad easier to maintain his momentum.

D’Orlando used the experienced gained while finishing fourth at LOR last year to absorb the intense pressure, especially as they worked their way past some slower traffic in the middle of the race. He also survived a rub of wheels with Campbell as they negotiated Turn Two with eight laps remaining before securing the victory by just over a half-second. He also nabbed an overdue first PFC Award of the season for brothers Dominic and Nicholas Cape as the winning car owners.

Denmark managed to squeak past Pabst Racing teammate Josh Pierson, from Wilsonville, Ore., on the opening lap. He slipped as much as four seconds behind the lead pair shortly after the halfway mark before closing again during the tense final laps to finish hot on Campbell’s tail.

Brazilian Kiko Porto (DEForce Racing) also worked his way into contention after starting sixth as the four leaders were blanketed by just over one second at the checkered flag.

Christian Brooks (Exclusive Autosport), from Santa Clarita, Calif., ran in fourth for most of the distance before slipping behind Porto and then struggling for pace in the closing stages as he fought desperately to stay ahead of points leader Yuven Sundaramoorthy (Pabst Racing), from Delafield, Wis., and Josh Green (Turn 3 Motorsport), from Mount Kisco. N.Y.

Pierson slipped from third on the grid to eighth, with Nolan Siegel (DEForce Racing), from Palo Alto, Calif., and rookie Dylan Christie (Turn 3 Motorsport), from Princeton, N.J., completing the top 10.

Last year’s Lucas Oil Formula Car Race Series champion Ely Navarro, from nearby Fishers, Ind., was the final unlapped finisher in 13th, earning himself the Tilton Hard Charger Award after having started from the 19th position.

The Cooper Tires USF2000 Championship will return to more familiar surroundings for the next event of the season, a pair of races to be held in conjunction with the entire Road to Indy Presented by Cooper Tires ladder and the NTT INDYCAR SERIES at Road America in Elkhart Lake, Wis., on June 18-20.

Provisional championship points after 8 of 18 races:

Michael d’Orlando (#4 Focused Project Management/DB Collaborative-Cape Motorsports Tatuus USF-17): “Crossing the line to realize I’m a winner on an oval in the month of May was so awesome! But man, oval racing is a completely different sport. Prescott gave me such a good fight the entire time, and he drove really well, kudos to him. He really put me on the ropes! It was a great race; he didn’t let up and that made it really interesting. To lock tires with 10 laps to go, my heart just dropped. I was defending my position a bit, but he got his wheel underneath, so I tried to move up and I just held on. Even after that, he never gave up and I’m glad he didn’t. That whole race was awesome, the 75 laps on the edge of my seat. It was incredible. Huge thanks to the Cape team and all my supporters.”

Prescott Campbell (#11 Fluid Logic/Valkyrie Intelligence-DEForce Racing Tatuus USF-17): “That was insanely close. We got side-by-side so many times and I was able to get close to him a few times – even too close, as we had contact. This track is one of the most mentally demanding on the calendar, as there’s no real break on the straights. You’re turning the whole time, the track is changing constantly, you’re reacting to what’s happening ahead of you. I think last year here was a big turning point for me, knowing I had to step it up mentally, so it’s a good example of my progression in the series. In the end, it was a good race, tough racing, so congratulations to Michael. I’m happy I was able to put pressure on him the entire race. It showed what kind of car we had. We were able to make runs even in the aero wash. Big thanks to the team, to my parents and to my sponsors.”

Jace Denmark (#23 Metal Works Custom Fabrication-Pabst Racing Tatuus USF-17): “That was fun! It’s a whole different discipline: the car feels different and the racing is different being side-by-side for multiple laps. The first half of the race went by pretty quickly and before I knew it, the white flag was out. I could see the guys coming up behind me so I’m happy to bring home the podium. It’s fun to race with these guys – I like to learn new things and I think I learned pretty quick. The team gave me an amazing car, it could have gone another 75 laps.”