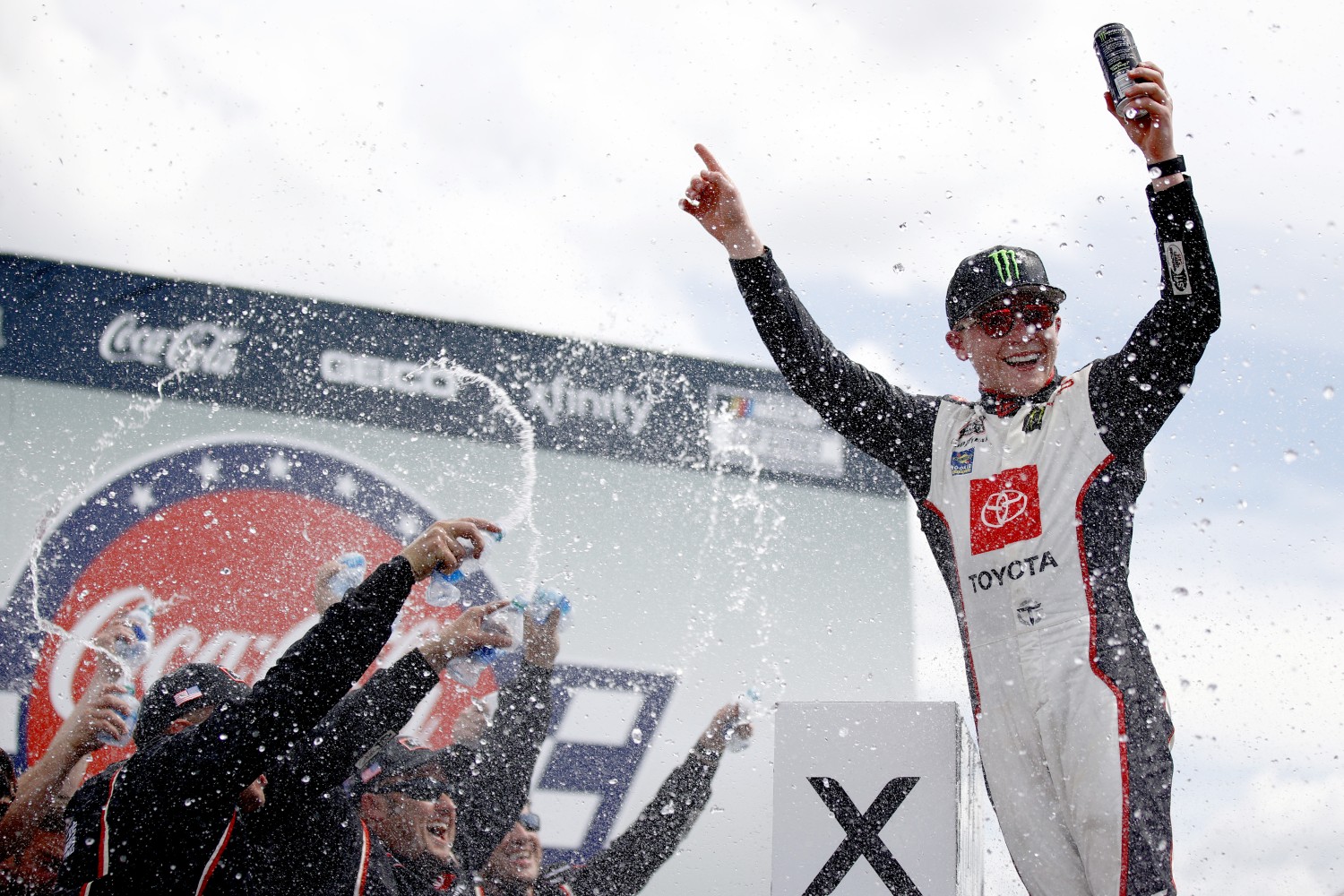 Ty Gibbs won his second NASCAR Xfinity Series victory in the sixth start of his career, recovering from a spin off Turn 4 to take the checkered flag in Saturday’s Alsco Uniforms 300 at Charlotte Motor Speedway.

The grandson of team owner Joe Gibbs led the final 20 laps, surviving two eventful restarts during that stretch to beat series leader Austin Cindric to the finish line by .437 seconds.

Gibbs, who won’t turn 19 until Oct. 4, is the youngest winner at Charlotte in any of NASCAR’s top three national divisions.

The race came down to a battle for the lead between Gibbs and Chase Briscoe, who led 30 laps before spinning off Turn 2 as Gibbs closed near his bumper and packed the air on the left rear of Briscoe’s Ford.

Gibbs apologized immediately on his team radio for putting Briscoe in a precarious position.

“I wasn’t trying to wreck him—I was trying to race him,” Gibbs said. “That was never my intention.”

After taking the checkered flag and climbing from his car, Gibbs was still apologizing, even though there was clearly no contact between his No. 54 Toyota and Briscoes’s No. 99 Ford.

“First off, I just want to say sorry to the 99 and Chase and his crew,” said Gibbs, who spun through the artificial turf in the tri-oval at the end of Stage 2. “I didn’t hit him, but I definitely helped him out with him getting loose there, and it was not my intention. Already wrecked myself so, I just want to say sorry to them more importantly than this entire win.’

But the victory nevertheless assuaged whatever guilty feelings he might have had.

“It’s just awesome,” Gibbs said. “I’ll take it. This is a good day—we got one more (race) to go. So, I just want to say thank you all the fans out there and hell, yeah!”

Briscoe conceded that his spin was simply the product of hard racing between two quality cars. Gibbs had closed on Briscoe in traffic and had actually led the previous lap as the drivers raced side-by-side across the start/finish line.

“It felt like there at the end we just made the wrong adjustment, and I was too tight,” Briscoe said. “But truthfully, Ty was probably going to get me either way…. After leading that many laps, it’s frustrating for sure.”

Seeking his first victory in his 99th start in the series, Daniel Hemric swept the first two stages, but a pit road mistake cost him dearly. During a pit stop under the sixth caution on Lap 121 of 200, Hemric was blocked by the Toyota of Chad Finchum and had to back up to escape his pit stall.

That was the least of Hemric’s problems. A tire rolled away from the car and impeded the pit stop of Landon Cassill, who was pitting behind Hemric. The resulting penalty sent Hemric to the back of the field, and though he recovered to run as high as seventh, he couldn’t avoid a seven-car wreck after a restart on Lap 187.

That accident knocked Hemric and Noah Gragson out of the race. After the subsequent restart on Lap 194, Gibbs pulled away from Cindric and sealed the victory, lowering his average finish in his six starts to 5.17—from an average starting position of 18.2.

Harrison Burton finished third, followed by Brandon Brown, whose crew chief, Doug Randolph, made the call of the race by saving a set of tires for the final 20 laps. Fighting for a Playoff spot and currently 13th in the series standings, Brown was outside the top 15 for the penultimate restart on Lap 187 but took advantage of his fresh rubber to charge to fourth.

How did you come back through the field and get back up front to win this race?

How special is it to win on an oval?

“It’s definitely nice to win on the oval, especially in my hometown. I’m 30 minutes away from here. So, it’s nice to have a win at least once today. You know I can’t think Monster Energy, Joe Gibbs Racing and to all the sponsors out there, there’s a lot of open, real estate so hit me up.”

How does it feel to win in your hometown of Charlotte?

“It feels really good. First off, I want to say sorry to (Chase) Briscoe and the 99 crew. That was not my intention at all to wreck them. I just got on his left rear and didn’t help him out with the air and he kind of hopped the cushion so it didn’t really help that. That was partially my fault and I take that for sure. It’s nice to get another win. I’ll take it and we’ll move on. We’ve got one more to go so stay around fans.”

What was it like coming from the back of the field?

“I was definitely frustrated with myself. I completely wrecked myself, but didn’t really make myself look good today and made some mistakes. Definitely still learning how the air works and I’ll take full responsibility for all the mistakes I made. Overall, we ended up in victory lane. Can’t thank my guys enough and Monster Energy and my family. It’s cool to have them here and we’ve got one more tonight.”

Has this season been more than you expected already?

“It’s definitely been a lot. I’m learning as I go and I’m learning how life works at the same time. Trying to figure myself out, but I really like this racing deal and I want to keep doing it.”