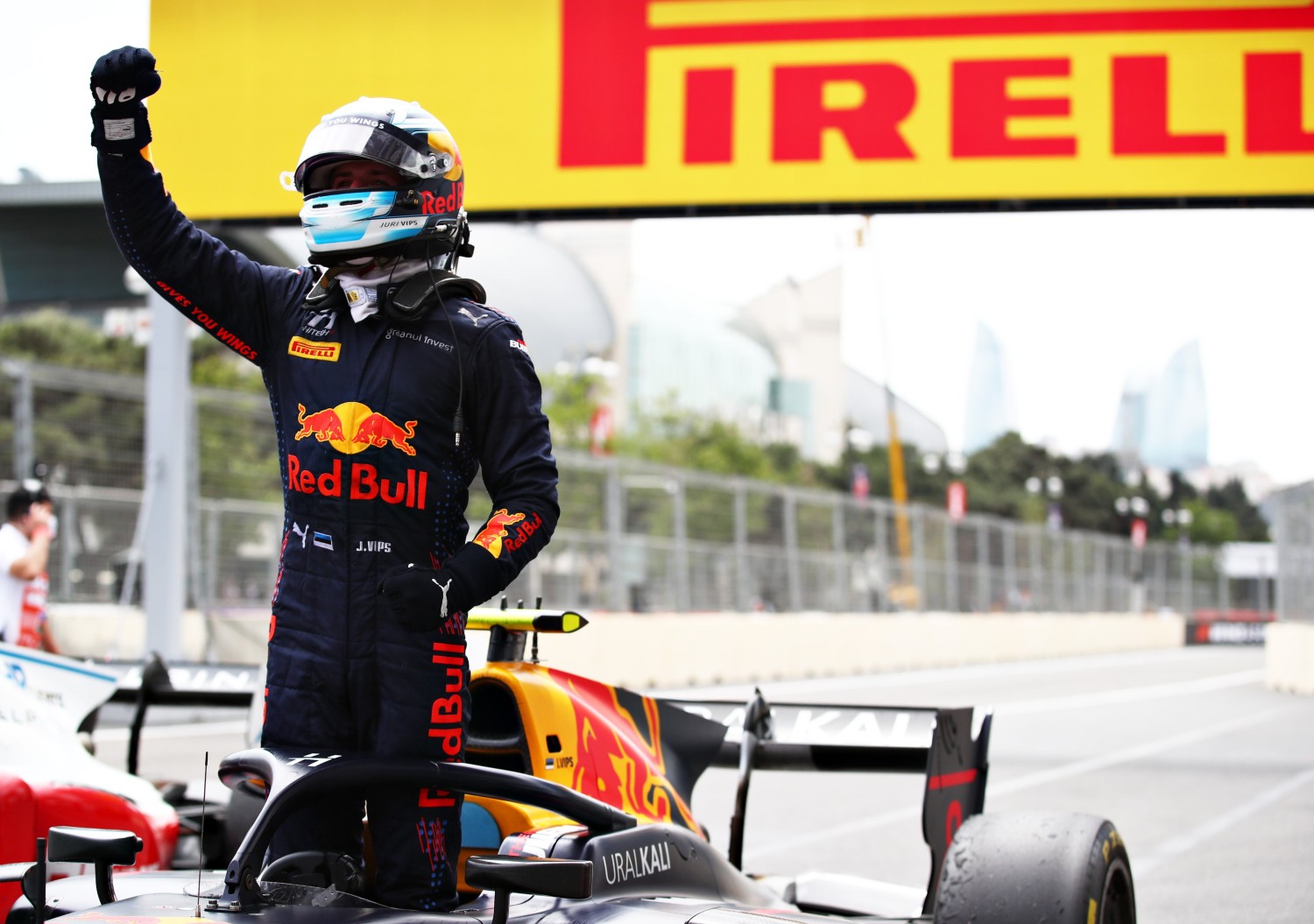 Red Bull junior Vips fought off team-mate and polesitter Liam Lawson to claim the lead on the opening lap, and eventually crossed the checkered flag over a second ahead of Alpine junior Piastri to take 25 points.

Beating out PREMA Racing duo Oscar Piastri and Robert Shwartzman, Vips becomes just the second double-winner of 2021, and is the first driver in Formula 2 to take two wins in a single weekend.

Piastri slices Guanyu Zhou’s lead in the Drivers’ Championship down to just five points. The UNI-Virtuosi racer finished outside of the points in 13th, telling his team over the radio he just didn’t have the pace.

Shwartzman was up from 10th after a disappointing Qualifying session and scored his second podium of both the season and the weekend, following up his Sprint Race 1 win with P3 to move up to third in the title fight.

Jack Aitken was the only driver to line up on the mediums, but the HWA RACELAB driver ended up starting from the pitlane, having stopped on track during the formation lap. There was a similar problem for the Campos Racing of Matteo Nannini, but the Italian couldn’t get going again.

After an aborted start and a second formation lap, Lawson and Vips gave their team a heart-in-mouth moment, the duo going side-by-side off the line and into the first corner. Eventually, Vips scooched ahead, but not before a touch of contact between the pair. Thankfully for Hitech, they both got away unscathed.

Piastri had gotten a great jump off the line from third and made the most of the duo’s brawl to clamber ahead of Lawson and into second.

As was the case in both of the Sprint Races, the field wouldn’t make it through the first lap without a Safety Car, as Marcus Armstrong got caught up in a scuffle with Dan Ticktum and Pourchaire.

None of the trio came off well, as Armstrong ended up in the wall and out of the race before Pourchaire retired from the pits. Meanwhile, Carlin were forced to bring Ticktum in for a new front wing, with the Briton also getting a new set of tires, before being handed a 10s-time penalty for causing the collision.

When racing resumed, Lawson regained P2 from Piastri and started to stare down his teammate in first, but was then handed a 10s-time penalty as well, for forcing Pourchaire off-track at the start of the race.

Vips was taking no risks and immediately headed into the pits to ditch his supersofts at the first opportunity on Lap 6, returning in ninth. Lawson made the change on the next lap, serving his penalty and returning in P13, while Piastri headed in from first and returned directly behind Vips.

As the rest of the grid, apart from Ticktum and Aitken, all headed in on Laps 9 and 10, Vips, Piastri and Ralph Boschung lined up in the provisional podium spots. But the Campos wasn’t in the position for long, getting overtaken by Shwartzman, who was up from 10th.

Piastri’s podium was also under threat, as the PREMA was given a 5s time penalty for an unsafe release, with 14 laps left to try and build a buffer. Meanwhile, Lawson was making moves on his way back through the field, rising to eighth after passes on Christian Lundgaard and Jehan Daruvala.

Piastri was closing in on Vips after the Estonian was held up by the back marker of Alessio Deledda, with the Italian given a time penalty for not letting the Hitech past. Once he had overcome Deledda, Vips was able to hunt down Aitken in second and put the HWA in-between himself and Piastri. Ticktum then pitted from first, serving his time penalty and returning in 11h, while Aitken fell to P12, after his own pit stop.

Despite the penalty, Ticktum was on the charge, setting purple first and second sectors before picking off both David Beckmann and Lundgaard for P8, behind Daruvala and Lirim Zendeli. Drugovich had edged ahead of Boschung for fourth, but was too far off Shwarztman to trouble the podium places.