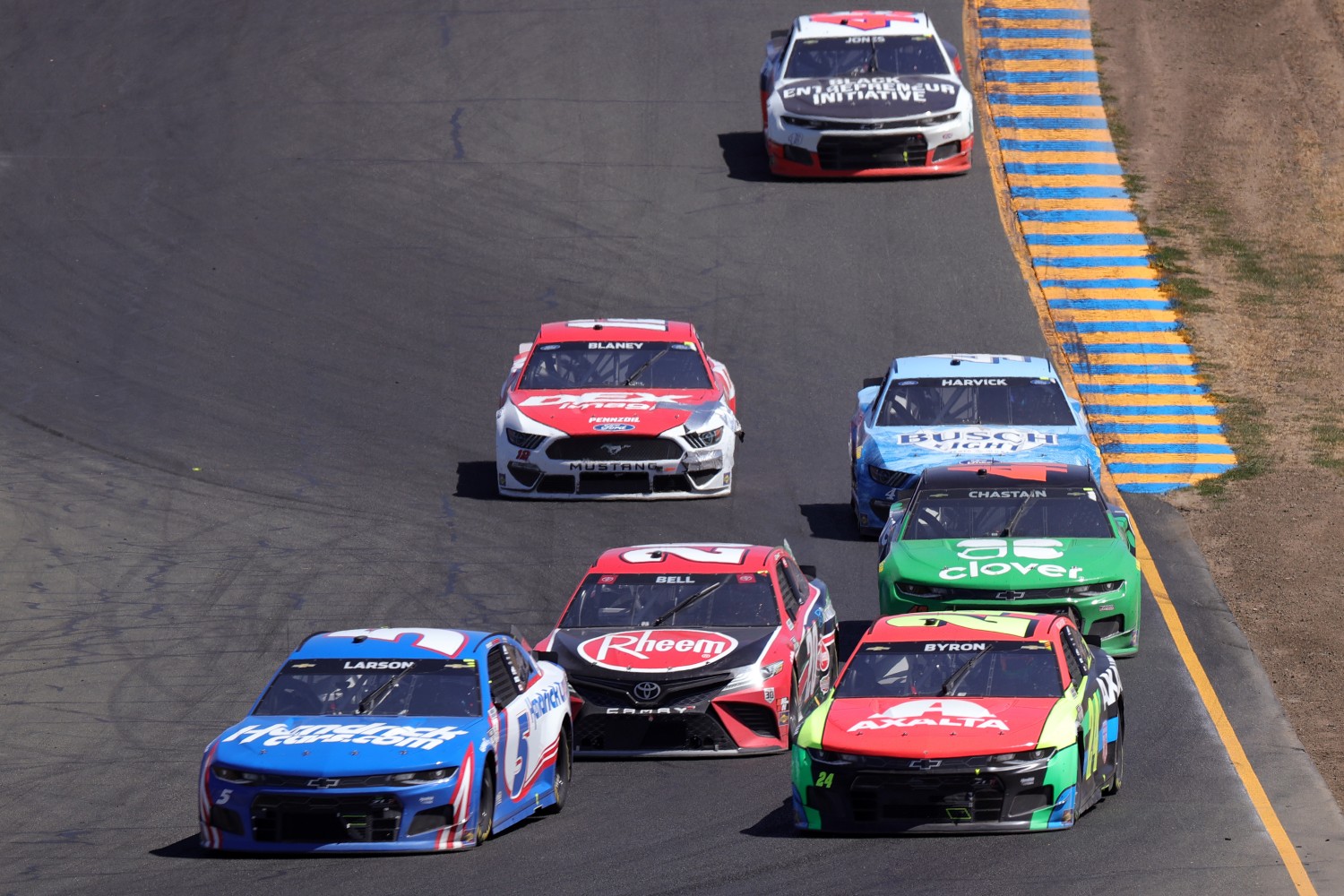 Proving that he could have made a great IndyCar driver, open wheel ace Kyle Larson dominated the Coco-Cola 600 last weekend, and this week he went to the road course of Sonoma Raceway, and gave the NASCAR drivers a driving lesson they won’t soon forget in winning the Toyota/Save Mart 350 NASCAR Cup race in dominating style.

The victory was Larson’s first at the 2.52-mile road course, his third of the season and the ninth of his career. It was the fourth straight 1-2 finish for Hendrick Motorsports and the first time since 2014 that HMS has posted four-straight wins.

Joey Logano came home third in the #22 Penske Ford while Kyle Busch rounded out the top-5 in the #18 Joe Gibbs Racing Toyota.

More importantly in Larson’s mind, he buried the Chip Ganassi drivers, the man who fired him for a heat of the moment racial slur, making each win extra special.

“It was not easy,” said Larson. “Any road course isn’t easy, just trying to keep it on track is tough; especially when you’ve got two of the best behind you on the last restart, Chase (Elliott) and Martin (Truex, Jr.). I felt like I did a good job at the one before and stretched it out a little bit and didn’t want to give him another try at it, but he kept the pressure on. Martin was strong too, but what a car.

“This HendrickCars.com Chevy, thank you Mr. Hendrick. The is unbelievable. I thought I would be okay today, but I just didn’t know how I would race. I don’t think of us really do with no practice. But our car was really good there and I can’t say enough about it.”

What Does It Mean To Win In Front Of Your Hometown Fans?

“Yeah, it means a lot. Northern California will always be home to me, even if I live way out on the East Coast now. Thanks to all the fans for coming out. I know there’s a lot of Sprint Car fans in the stands and around this racetrack. I got to see a lot of my friends here today.  I’ve got my family here. This is unbelievable.

“And to get back-to-back wins in the Cup Series is something I’ve always dreamed of doing and to get it done feels great. To win last week on Memorial Day weekend, four in a row now, if you count my dirt racing too. And we’ve got a big week of racing coming up. I look forward to all that and just look forward to keeping the streak going.”

There were many accidents as the NASCAR drivers were crashing left and right.

One  driver was William Byron who was sidelined by damage sustained in an accident on lap 76.

“I was trying to roll the outside of the No. 43 (Erik Jones) and the No. 4 (Kevin Harvick) was in front of me. I thought he was going to run the bottom and obviously somebody spun in front of him and caused a big pileup. At that point, you’re just a passenger. You’re obviously going to knock the radiator in and be done for the day.”

“It stinks, but we were struggling all day to be honest. So, we have to go back and work on that. Definitely learned some lessons. Thanks to Axalta, Chevrolet and everyone. We’ll re-group. It was really the first bad weekend of the year, so we’ll re-group from it.”

It was Hendrick Motorsports 7th win of the year and 270 total.

Elliott, the reigning series champion, achieved his best finish at Sonoma, but couldn’t find a way past his teammate.

“I wish I knew (where Larson was stronger),” said Elliott, who has six road course wins to his credit. “I would have tried to give him a little better run. But congrats to Kyle and (crew chief) Cliff (Daniels) and everybody on the 5 team. They’ve been doing an amazing job.

“I’m really proud of our NAPA group, though. I felt like we were a lot better there at the end than we were at the beginning. That’s definitely the best I’ve ever been here at Sonoma.”

Truex came home third, followed by Joey Logano and Kyle Busch, who summed up Larson’s dominance in one sentience.

“The 5 was just out of this world,” Busch said.