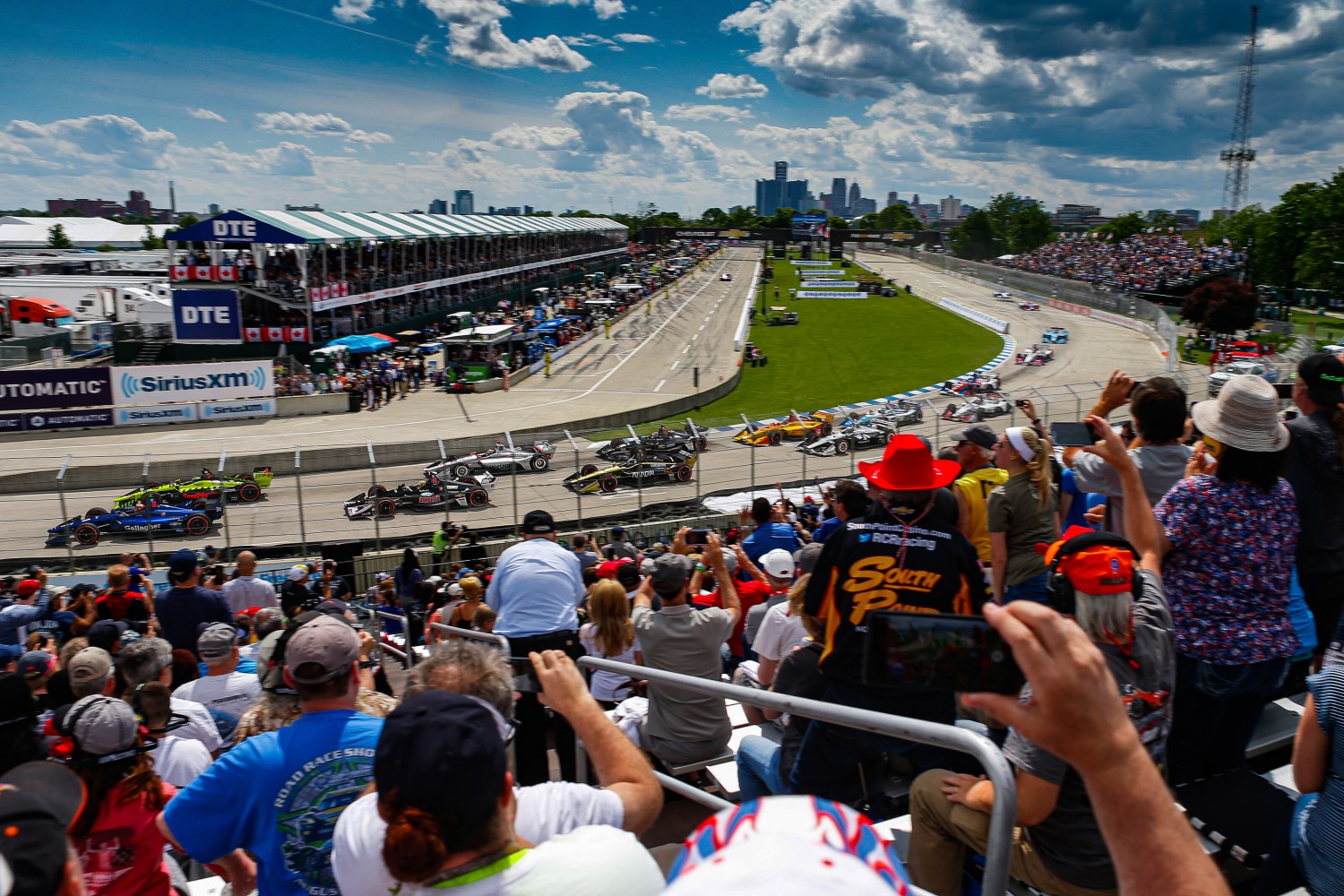 The NTT INDYCAR SERIES gets back to the business of speed this week with the Chevrolet Dual in Detroit doubleheader Saturday and Sunday, the marquee races of the Chevrolet Detroit Grand Prix presented by Lear at The Raceway at Belle Isle Park.

Competitors certainly will be raring to go as it will have been 12 days since the 105th Running of the Indianapolis 500 presented by Gainbridge at Indianapolis Motor Speedway.

Helio Castroneves, who won “The Greatest Spectacle in Racing” on May 30 and is a three-time Detroit race winner, is not one of the competitors as this is not one of the six races he is scheduled to drive for Meyer Shank Racing this season. But this field is nonetheless stacked, with seven drivers who have won the event, including four with multiple wins. Reigning series champion Scott Dixon of Chip Ganassi Racing (No. 9 PNC Bank Grow Up Great Honda) has won three times, led by the most recent race in 2019. The 2020 event was not held amid the COVID-19 pandemic.

Fans will return en masse, and all tickets for Friday’s Comerica Bank Free Prix Day have been claimed. A limited number of reserved grandstand tickets are available for Saturday and Sunday. Indy Lights will stage 50-minute races each weekend day.

As is typically the case following the “500,” there are storylines aplenty. Consider these five:

Back to a road-racing field

Santino Ferrucci, who finished sixth in the “500” for Rahal Letterman Lanigan Racing, gets the opportunity to continue his INDYCAR season by driving the team’s No. 45 Hy-Vee Honda. Ferrucci had a top-10 Detroit finish in one of the 2019 races as a series rookie.

The rest of this field is a continuation of the season-long entry list. Second-year driver Alex Palou (No. 10 The American Legion Honda of Chip Ganassi Racing) is the series leader by 36 points over Dixon, his teammate. However, Palou will be serving a six-position grid penalty in this weekend’s first race for an unapproved engine change following the Carb Day practice at IMS. This also will be Palou’s first race at the circuit, so he will need to get acclimated quickly.

“I’ve been preparing a lot on the sim – just for myself, not setup-related,” Palou said. “I’ve been doing it at home just because it’s super important on a street course to really know the bumps, to really get some references.”

This remains one of the most balanced fields in history, with six drivers representing five teams winning the season’s first six races. The last time the series opened with seven different winners was in 2017, and before that it happened in 1958 and 2000.

Four-time INDYCAR SERIES champion Sebastien Bourdais (No. 14 ROKiT AJ Foyt Racing Chevrolet) is a two-time Detroit winner – both wins came with Dale Coyne Racing with Vasser-Sullivan – and Graham Rahal (No. 15 Fifth Third Bank Honda of Rahal Letterman Lanigan Racing) is the only INDYCAR driver to have swept a Detroit weekend (in 2017). Andretti Autosport’s Ryan Hunter-Reay (No. 28 DHL Honda) is the other former Detroit winner in this field. He won in 2018.

Chevrolet wants to fare better on its home turf as Honda-powered cars have won five of the past six NTT P1 Awards and races. Bourdais said “Bowtie” teams put extra emphasis on this event.

“There’s Indy and there’s Detroit – that’s the list of priorities,” he said. “For sure, everybody gets the message.”

Who Most Needs a Win

Quite simply, many drivers do, and the list begins with former series champions Power (2014) and Hunter-Reay (2012) who are 12th and 17th, respectively, in the standings.

“I know the potential is there, we just need to execute,” said Hunter-Reay, who has finished on the podium four times in the event. “We need to come out swinging right from the start, roll the car off the truck within the neighborhood on the setup that we think we like.”

Andretti Autosport’s Alexander Rossi (No. 27 AutoNation/NAPA AUTO PARTS Honda) is another driver who had designs on winning the championship this season, and he stands a disappointing 15th in the standings as the season nears its midpoint.

A twist to qualifying format

With this weekend being a street course doubleheader, slight modifications have been made to the NTT P1 Award qualifying procedures. In short, each day will feature an abbreviated knockout format.

In Segment One, the field will be divided into two groups based on Friday’s practice times, with the fastest driver choosing his groups with the “odds” joining him and the “evens” in the other group. Group 1 and Group 2 will each receive a 10-minute qualifying session, with the clock running during red-flag conditions. The fastest six cars from each group will advance to Segment Two, known as the Firestone Fast 12. Those not advancing determine starting positions 13 through 25 based on time. 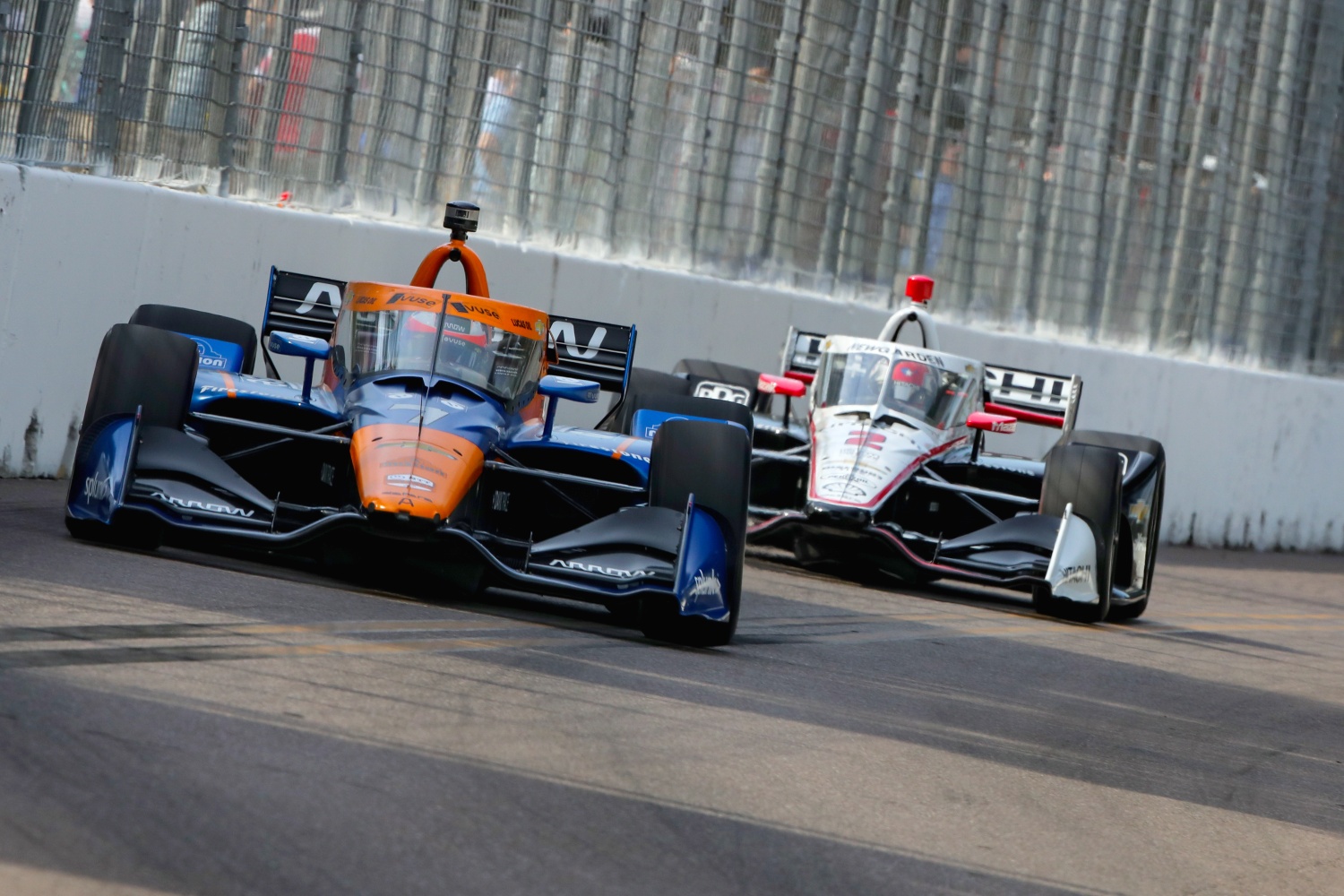 In Segment Two, all 12 cars will have their first segment times voided. Qualifying will span 10 minutes, with a minimum of five minutes of guaranteed green-flag time. Drivers will start that day’s race ranked first through 12th based on their best lap time from this segment.

All cars will be impounded by INDYCAR after completing their final run.

“We have two races, but for all intents and purposes when you actually get on track to practice and qualify, it ends up being very, very rushed and very segmented,” Hunter-Reay said. “So, you need to make the most of every lap on track.”

Saturday’s qualifying session begins at 11 a.m. ET, with Sunday’s at 9:15 a.m. ET. Both sessions will air live on the NBC Sports Network and Peacock.

There isn’t a better way to say this: The physical demands on the drivers – and their crews, for that matter – are steep in an event with races on consecutive days in June.

Weekend temperatures on the island in the Detroit River are expected to be in the upper 80s with sunshine aplenty.

This street circuit is also one of the season’s most demanding with its bumps and turns. The relative shortness of the straightaways provides precious little time for these athletes to catch their breath.

“Yeah, it’s never really a fun last 10, 15 laps of those races, then doing it twice in a weekend,” Bourdais said. “I think that dehydration level is going to be tough.”

Said Rahal, “I do think it’s going to be an exceptionally physical weekend.”

Add in the fact both weekend days will have qualifying and 70-lap races within hours of each other, which creates a short turnaround for all involved. Damage from contact with the looming walls will not only lead to bruises, it could be a hindrance for the next day.

Teams must be on point. Those who fare the best in that regard likely will be the ones celebrating at the historic Scott Fountain.

One of the Detroit Pistons brightest young stars will serve as Grand Marshal at the Chevrolet Detroit Grand Prix presented by Lear on Sunday, June 13. Saddiq Bey, who just completed a stellar rookie season in the National Basketball Association (NBA) for the Pistons, will participate in several activities to celebrate the final day of a busy Grand Prix weekend on Belle Isle.

Bey will participate in pre-race and post-race ceremonies for the second Chevrolet Dual in Detroit NTT INDYCAR SERIES race (Sunday, June 13 at 12 pm ET on NBC) on the Belle Isle Park street circuit. After getting a chance to meet some of the star drivers and teams competing in INDYCAR, Bey will deliver the official command of “Drivers, To Your Cars” before the final race of the Chevrolet Detroit Grand Prix presented by Lear. The talented 6-foot-7-inch forward from Washington, DC will then ride in an official pace car at the front of the INDYCAR field before the green flag waves to begin the Dual in Detroit II. After the race, Bey will help present trophies to the top three finishing drivers as they celebrate at Autotrader Winner’s Circle located at the historic Scott Fountain.

“It’s an honor to be the Grand Marshall for the Detroit Grand Prix,” said Bey. “The city has such a rich history within the sports and car industries, and I’m excited to be a part of this incredible event on Belle Isle.”

Bey was drafted by the Pistons in the first round (No. 19 overall) of the 2020 NBA Draft after a successful two years at Villanova University. During his freshman season, Bey started 29 games for the Wildcats and was named to the Big East All-Freshman team after averaging 8.2 points and 5.1 rebounds. His sophomore season featured a career-high 33 points with eight three-pointers against Georgetown. He finished the season averaging 16.1 points, 4.7 rebounds and 2.4 assists. Bey won the Julius Erving Award as the nation’s top small forward and was a unanimous selection on the All-Big East first-team.

In his rookie season with the Pistons, Bey became one of the team’s building blocks for the future with his standout play on both ends of the court. He set a Pistons rookie record and led all NBA rookies with 175 three-point field goals on the year, and he was named the Eastern Conference Player of the Week in mid-February, following a week that included a career-high 30 points, along with 12 rebounds, in a Pistons win against the Boston Celtics. For the season, Bey averaged 12.2 points and 4.5 rebounds per game, and he will be a strong candidate to earn all-rookie team honors for the 2021 season.

“We are excited to welcome one of the Detroit Pistons brightest young stars and one of the top rookies in the NBA with Saddiq Bey serving as our Grand Marshal for Sunday at the Grand Prix,” said Michael Montri, President of the Chevrolet Detroit Grand Prix presented by Lear. “Saddiq will help us get everything started as we celebrate the final day of what we know will be a memorable weekend on Belle Isle.”

Push-to-pass parameters: 150 seconds of total time with a maximum time of 15 seconds per activation (for each race)

Firestone tire allotment: Eight sets primary, five sets alternate (weekend). Teams must use one set of primary and alternate tires in each race. One additional set available to teams fielding a rookie driver is available for the first session of the weekend.

INDYCAR Radio Network broadcasts: Mark Jaynes is the chief announcer alongside analysts Davey Hamilton and Nick Yeoman. Jake Query and Michael Young are the turn announcers with Ryan Myrehn and Joel Sebastianelli in the pit lane. The Chevrolet Dual in Detroit doubleheader will air live on network affiliates, SiriusXM 205, indycar.com and the INDYCAR Mobile app powered by NTT DATA. All NTT INDYCAR SERIES practices and qualifying are available on SiriusXM 205, indycar.com and the INDYCAR Mobile app. 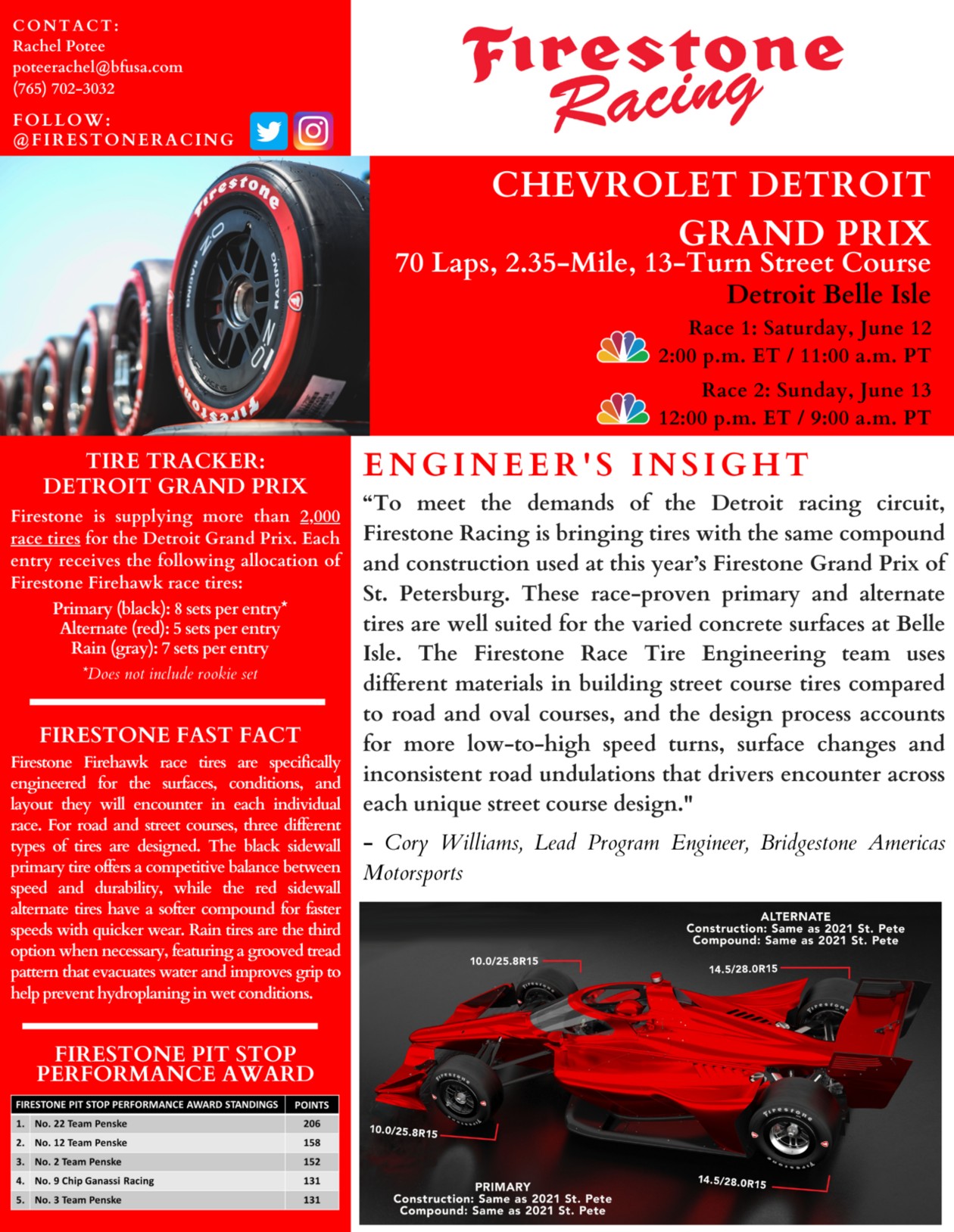