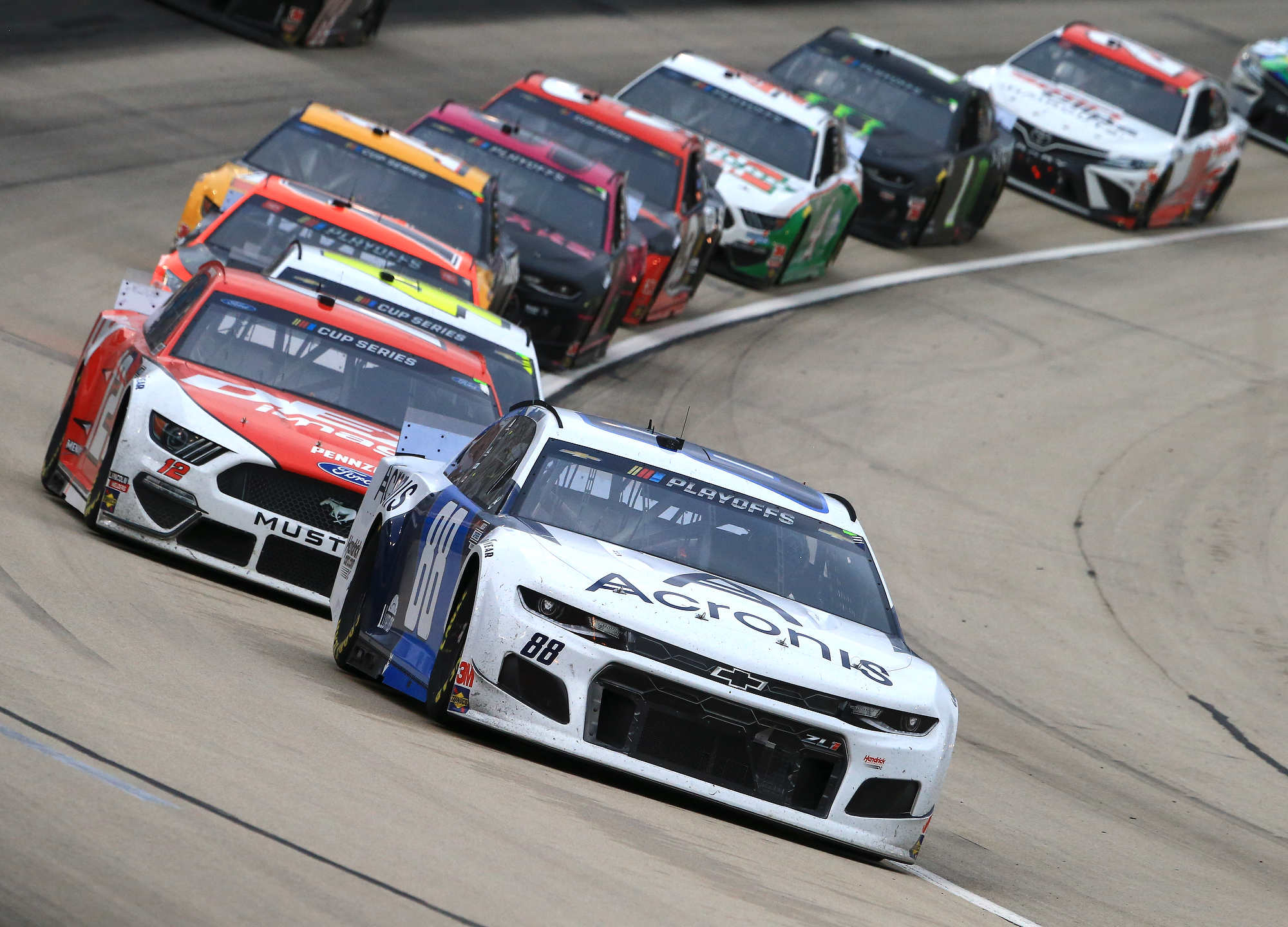 The starting lineup for the first ever NASCAR All Star event at the 1.5-mile Texas high banks was set by random draw and last week’s race winner and 2019 All Star champion Kyle Larson, driver of the No. 5 Hendrick Motorsports Chevrolet, has drawn the pole position. He will start alongside Kyle Busch, driver of the No. 18 Joe Gibbs Racing Toyota, on the front row.

The winners of the first two stages  and the race winner of the NASCAR Open (6 p.m. ET on FS1, MRN and SiriusXM NASCAR Radio) – the night’s opening race for drivers who have not already qualified for the main event – will transfer into the All-Star Race along with a fourth driver voted on by the fans. Reigning NASCAR Xfinity Series champion Austin Cindric is among those racing in the NASCAR Open for an All Star marquee spot.

Round 3 is 15 laps and will be inverted again anywhere from the eighth to 12th positions – decided by a blind draw. Round 4 is 15 laps – simply starting the way the previous round ended.

Round 5 is 30 laps – the starting lineup will be decided based on the cumulative finishing order of the first four rounds. The driver with the best finish will start on pole. All cars will be required to make a four-tire pit stop and the team with the fastest stop will earn a $100,000 bonus.

The Round 6 grand finale will be a 10-lap shootout with cars lining up according to how they finished in Round 5 … and a $1 million on the line for the mad dash to the checkered.

Certainly, the defending NASCAR All Star Race winner Chase Elliott has to be considered a favorite again. He has an impressive 6.6 average finish in All Star competition including that victory last season – only teammate Kyle Larson (6.5) is better. Texas has been a strong track for Elliott – statistically and sentimentally. He scored his career first Xfinity Series victory there in 2014 and has five Top-10 finishes in 10 NASCAR Cup Series starts.

Should Elliott win this weekend he would become only the third driver in history to win back-to-back All Star races, joining Davey Allison (1991-92) and Jimmie Johnson (2012-13)

“With this year’s format, there’s obviously a lot going on,” Elliott said of the 2021 NASCAR All Star Race. “I think it’ll be hard to play games to try and set yourself up for the next round; that may end up hurting you more than helping.

“It’s going to be one of those deals where you just have to race as hard as you can the whole time and let the inverts play out on their own. I think it will be entertaining for the fans and hopefully, we can put on a good show. I know I’ve said it before, but I’m happy to see the All Star Race moving around to different tracks. I think it’s a race that is meant to change locations.”

Stewart-Haas Racing’s Harvick is the only multi-time All-Star winner in this week’s field (2007 and 2018) and has finished top-five in the last three races. Joe Gibbs Racing’s Kyle Busch is the all-time leading driver in All Star race laps led (271) – 100 laps more than anyone else in Sunday’s field.

Busch will be running in the Xfinity Series race Saturday afternoon. Already the all-time winningest driver in the series, he is two wins way from 100 victories.

There have been seven different winners in the last seven races of the season and Texas is a venue many teams have had circled on their list of potential winning venues.

During last year’s Playoff race at Texas, a pair of 20-year-olds turned in one of the most exciting finishes of the season with Harrison Burton passing Noah Gragson in the final corner of the final lap to take the victory.

The first race at Texas had drama of its own with race winner Kyle Busch disqualified and eventual series champion Austin Cindric awarded the victory. Busch’s car failed post-race inspection – not meeting the height requirements.

Cindric, driver of the No. 22 Team Penske Ford, returns to town this weekend looking for a series-best fourth win in 2021 but coming off his worst finish of the year, 14th-place at Mid-Ohio – even though he led 30 laps. He’s had a tip-of-the-hat relationship with the Fort Worth high banks – scoring five top-10 finishes in six career starts there. His worst result is 11th (2019).

He currently holds a commanding 96-point advantage over veteran A.J. Allmendinger in his quest for a second consecutive regular season championship. Allmendinger scored his second trophy of the season last week at Mid-Ohio and has eight top-five finishes in the No. 16 Kaulig Racing Chevrolet. Interestingly, this will be the 39-year-old Allmendinger’s first career Xfinity Series start at Texas. The former Cup regular had two top-10 finishes in 20 NASCAR Cup Series races there.

Burton, 20, is certainly hopeful that he can reclaim some of that Texas magic from last year. The popular driver of the No. 20 Joe Gibbs Racing Toyota has yet to win this season despite a strong statistical output buoyed by nine top-10 finishes. His best work of 2021 has been third place – three times (Daytona, Atlanta and Charlotte).

He’s finished top-10 in all three of the season’s races on 1.5-mile tracks such as Texas.  In fact he carried a seven-race streak of top-10 results before a DNF at Mid-Ohio last week. He’s finished seventh or better in all three of his career starts at Texas. In fact, he and Cindric are the only full time drivers with previous victories at the track.

Easily the most motivated driver in the series this week has to be Burton’s runner-up last year, Noah Gragson. The 22-year-old, Las Vegas native has had a frustrating year by anyone’s standards – with a series high six DNFs. Last weekend, he didn’t even complete a single lap in the No. 9 JR Motorsports Chevrolet, retiring with body damage after an opening lap miscue at Mid-Ohio.

Currently ranked a career low, 11th in the championship standings – only 15 points ahead of 13th place Brandon Brown in the quest to make the 12-driver Playoff field.

His best finishes of the season, however, have been on 1.5-mile tracks. Two of his top five efforts came at Las Vegas (fifth) and Atlanta (fourth). He had a string of four top-five runs between Atlanta and Talladega this Spring, but has suffered DNFs in the last three races.

The Texas track may be just the panacea, however. Gragson has been especially adept at this brand of 1.5-mile competition. In his young three-year Xfinity Series career, he has earned top-five finishes in 39 percent of the races he’s run and scored top-10 finishes in 67 percent of his races. Last season, he led 622 total laps or more than 12 percent of all laps run. And he was ranked first or second in the championship for 11 of season’s 33 weeks finishing a career-best fifth in the 2020 championship.

“Last time we were at Texas we almost put our Bass Pro Shops-True Timber-Black Riffle Coffee Camaro in Victory lane, so I know [crew chief] Dave Elenz and this entire No. 9 team will unload a fast Chevrolet,” Gragson promised. “We will hopefully be one spot better than the last time here and have our entire team celebrating in Victory Lane.”

The series returns to action and makes its first Texas stop in Saturday’s SpeedyCash.com 220 (1 p.m. ET on FS1, MRN and SiriusXM Radio) where Sauter would love to reclaim some of the winning magic he used to sweep the 2012 series stops and to earn trophies in consecutive years from 2016-18.

The driver of the No. 13 ThorSport Toyota, could certainly use a good run Saturday. The veteran is 10th in the series Playoff outlook two points ahead of Austin Wayne Self in 11th – the first spot outside the Playoff cutoff.

Sauter has 11 top-five and 17 top-10 finishes in 25 Texas Truck Series starts, however his last top 10 came in 2019 (third). It’s been an all-or-nothing type year for Sauter who has four top-10 finishes but also three DNFs. His last top-10 came at Darlington (sixth) three races ago.

Certainly, those competitors leading the driver standings, three-race winner John Hunter Nemechek and two-race winner Ben Rhodes, would love to up their game on the Fort Worth track. Nemechek, who leads the points standings, has eight top-10 finishes in the seasons’ 10 races, but has only a single top-10 Truck Series finish in five Texas starts. The last time the driver of the No. 4 Kyle Busch Motorsports Toyota raced a truck at the track was 2017.

Rhodes, driver of the No. 99 ThorSport Racing Toyota, has four career top-10 finishes in 10 Texas starts – a best of runner-up in 2018. He currently boasts a series-best nine top-10 finishes this season, including the last six races.

Reigning series champion Sheldon Creed, joins Sauter and Matt Crafton as the only series regulars to have tipped his hat in Texas Victory Lane – winning from pole position last Fall after leading a dominating 131 of the 152 laps. The driver of the No. 2 GMS Racing Chevrolet would absolutely like to reclaim some of that magic. He won at Darlington but has a pair of finishes 30th or worse in the last four races.

Hattori Racing Enterprises driver Austin Hill – last year’s regular season champion – is another that could use an invigorating victory this weekend. After shaky season start, he’s finished top-10 in seven of the last eight races. His best work in three top-10 finishes in nine Texas starts is runner-up last Fall.

This weekend’s race will feature a pair of NASCAR Cup Series regulars amongst the championship contenders. Chase Elliott (No. 24 GMS Racing Chevrolet) and Ross Chastain (No. 45 Niece Motorsports Chevrolet) are entered. Elliott won an Xfinity Series race at the track in 2014.